Imagine my surprise when the mail carrier rang the doorbell yesterday and I had two huge boxes on my front porch. This is what was inside of them. 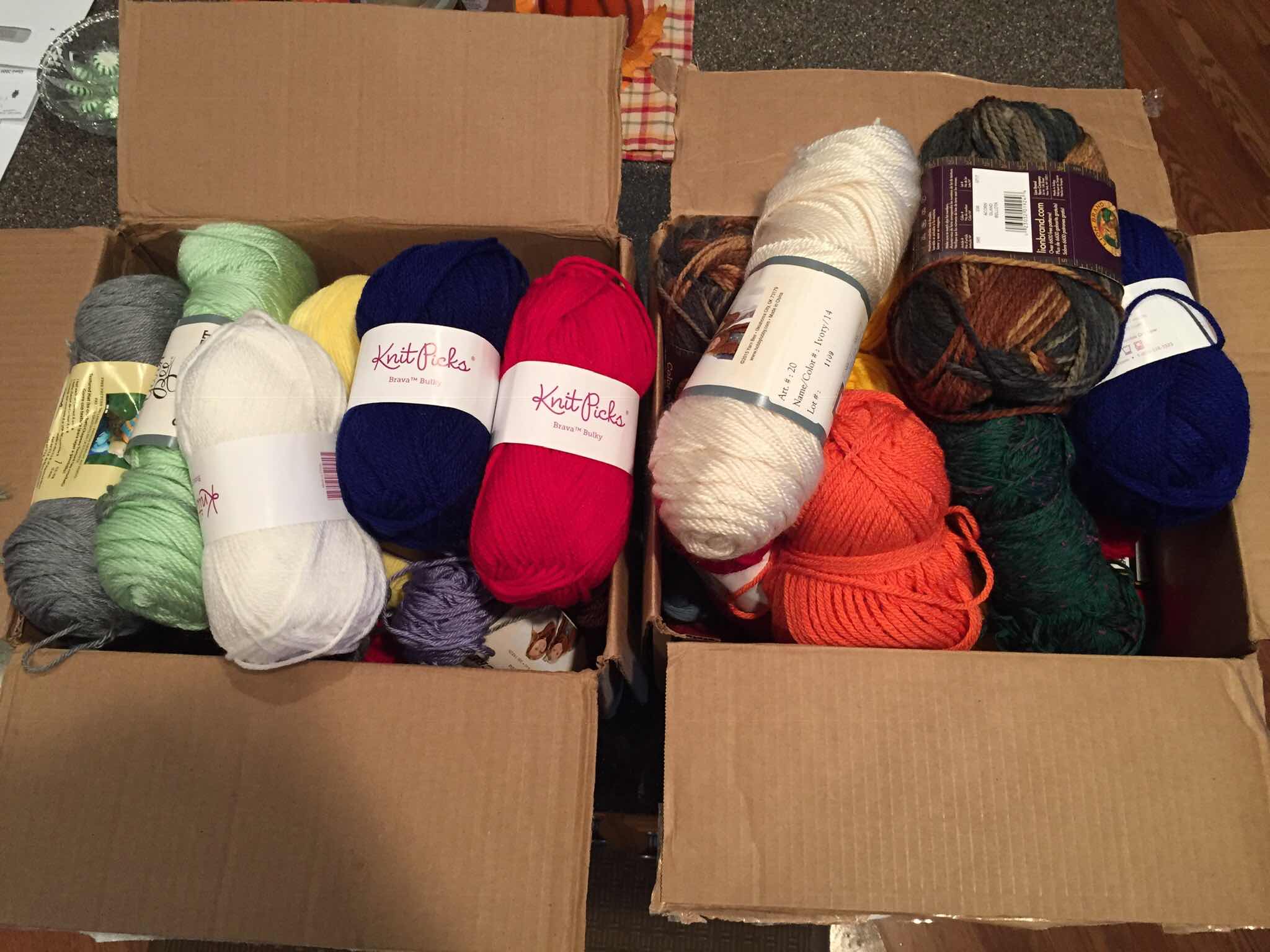 Sharon, “Grammy Braxton” over on my sidebar sent me these two big boxes full of yarn. 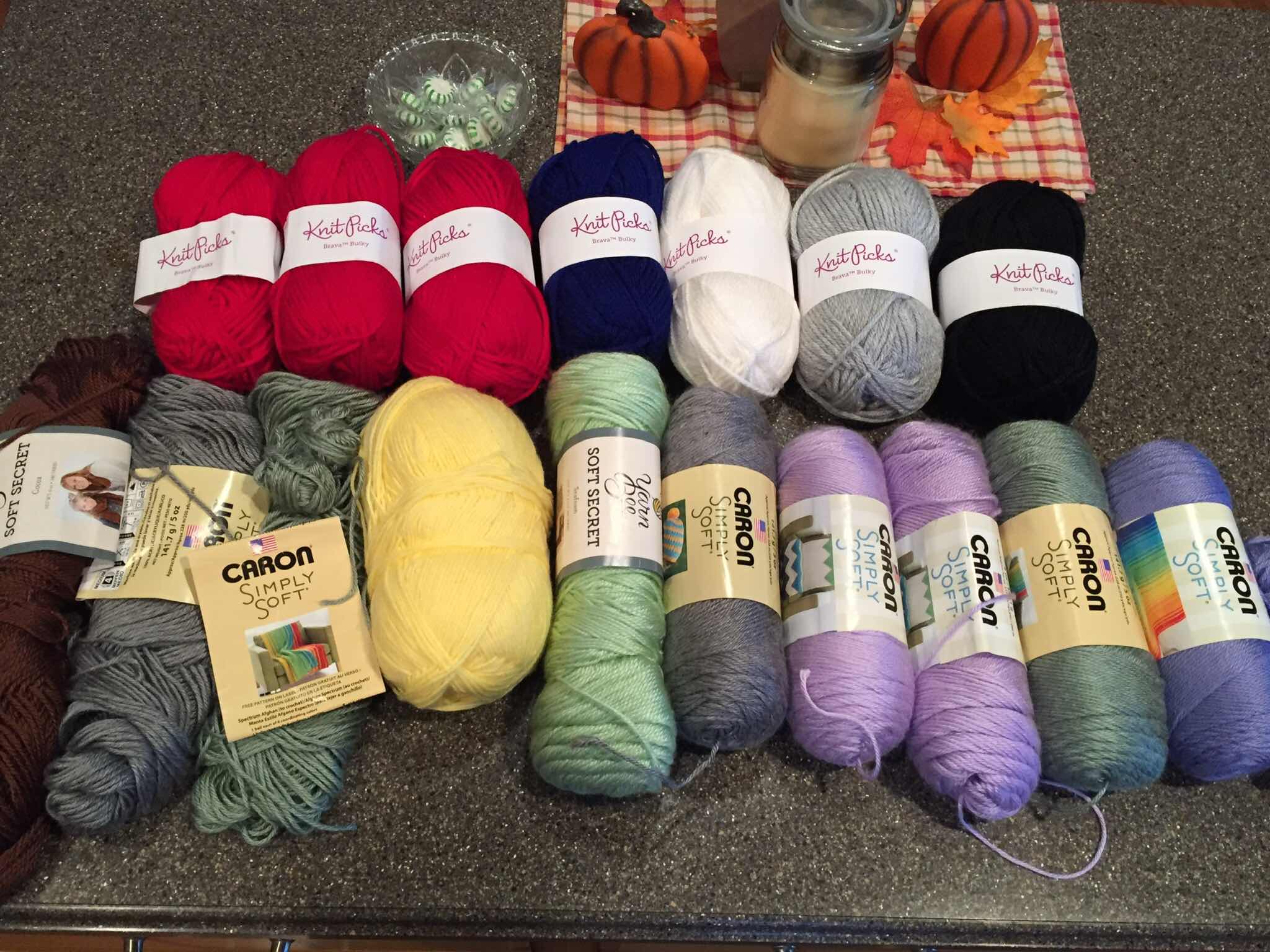 And not just any yarn. Lots of Knit Picks bulky yarn. Caron Simply Soft, which I like to use for baby sweaters and much more. 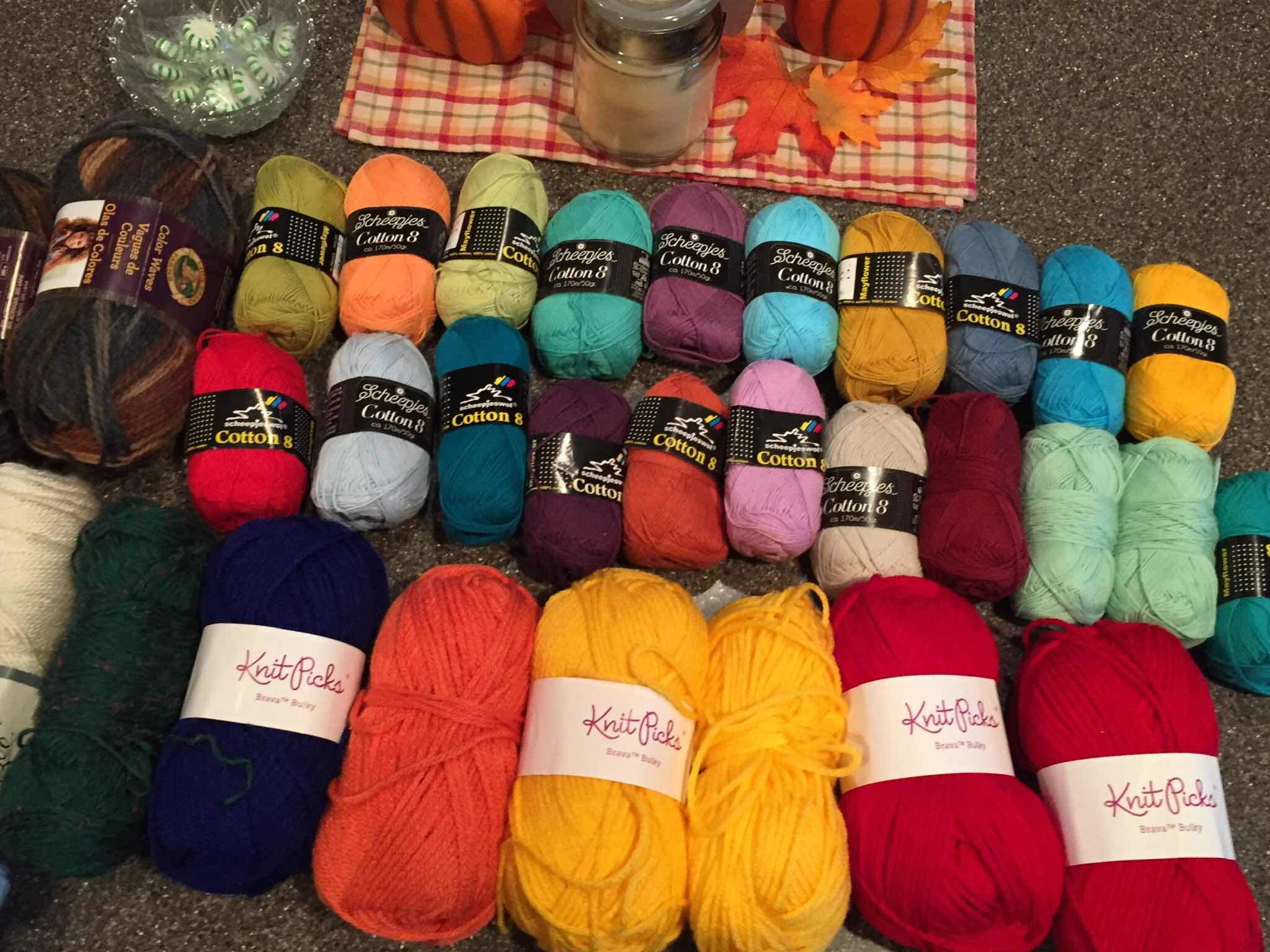 Lots and lots of Scheepjes cotton too. 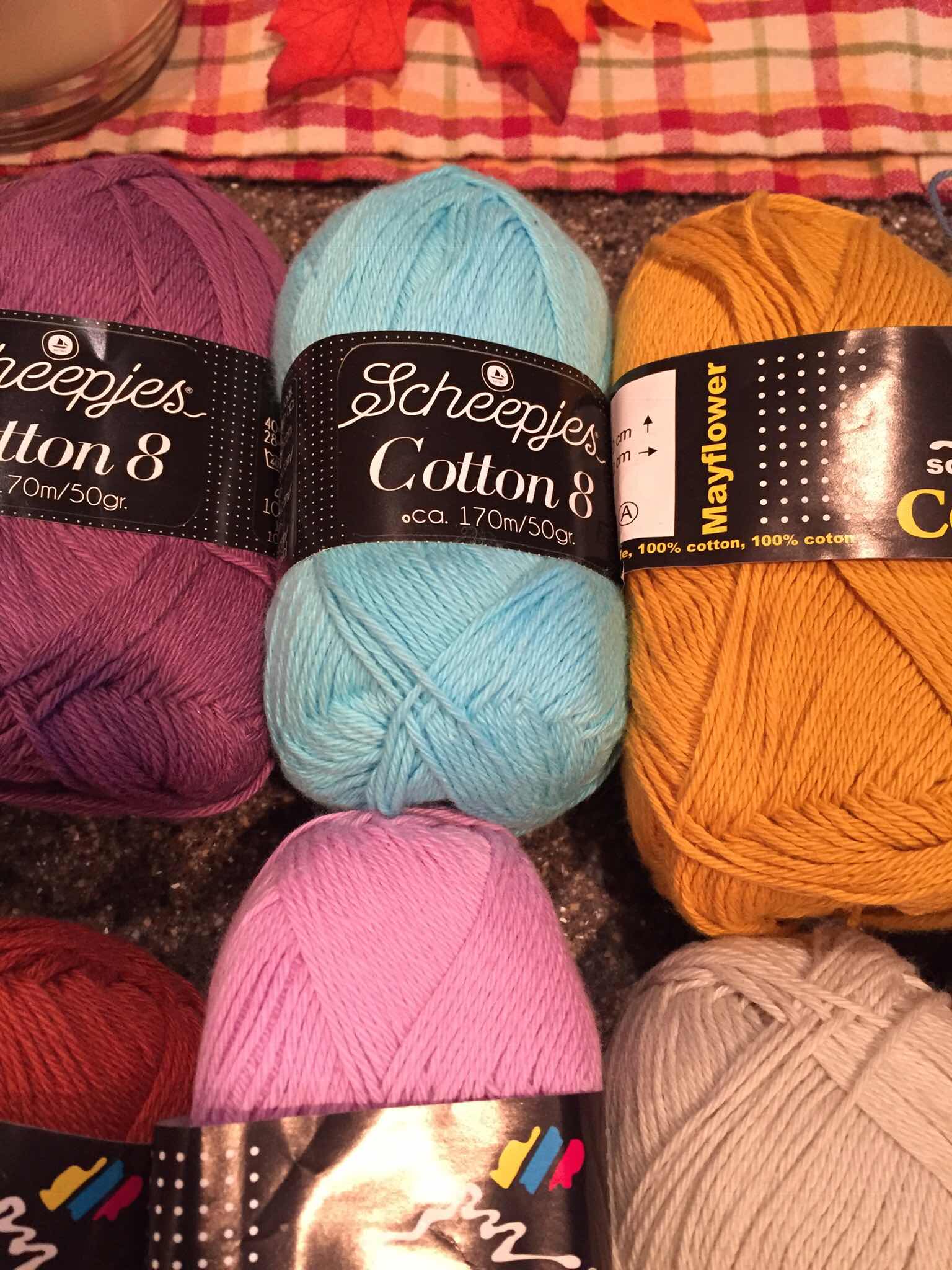 This is some great yarn.  I cannot believe her generosity. The postage alone on these two boxes was astronomical not counting the yarn costs.  Sharon, thank you very much. I will definitely be using this for my charity knitting. 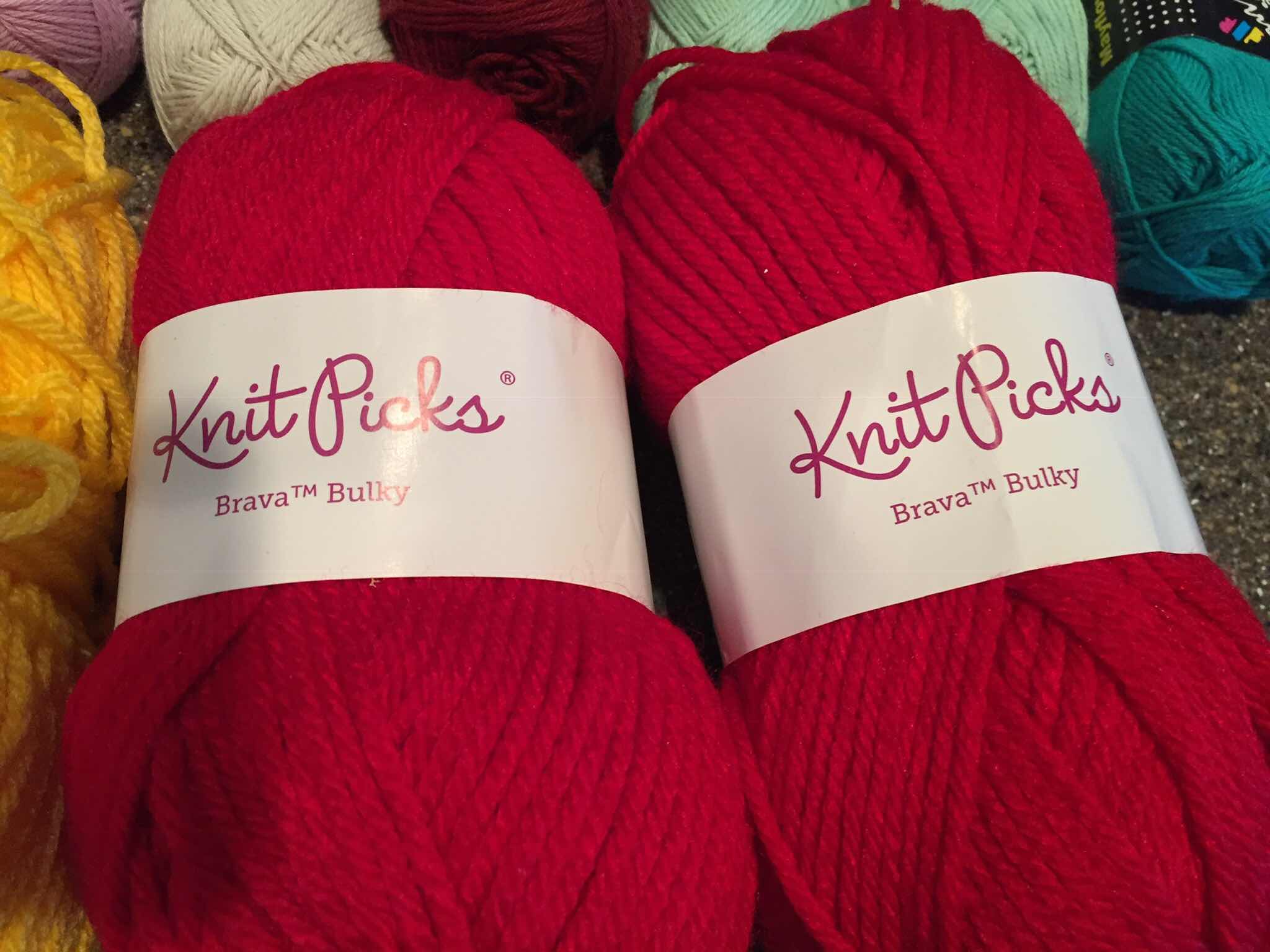 Five more pair of mittens are made for the bag for next years school children. Also an adult pair was made for a lady who’s been attending our church recently. She just moved from a homeless shelter into her first apartment last week. While she was here for dinner, she saw the children’s mittens and I told her I would make some for her own. She wanted them to match the kids! 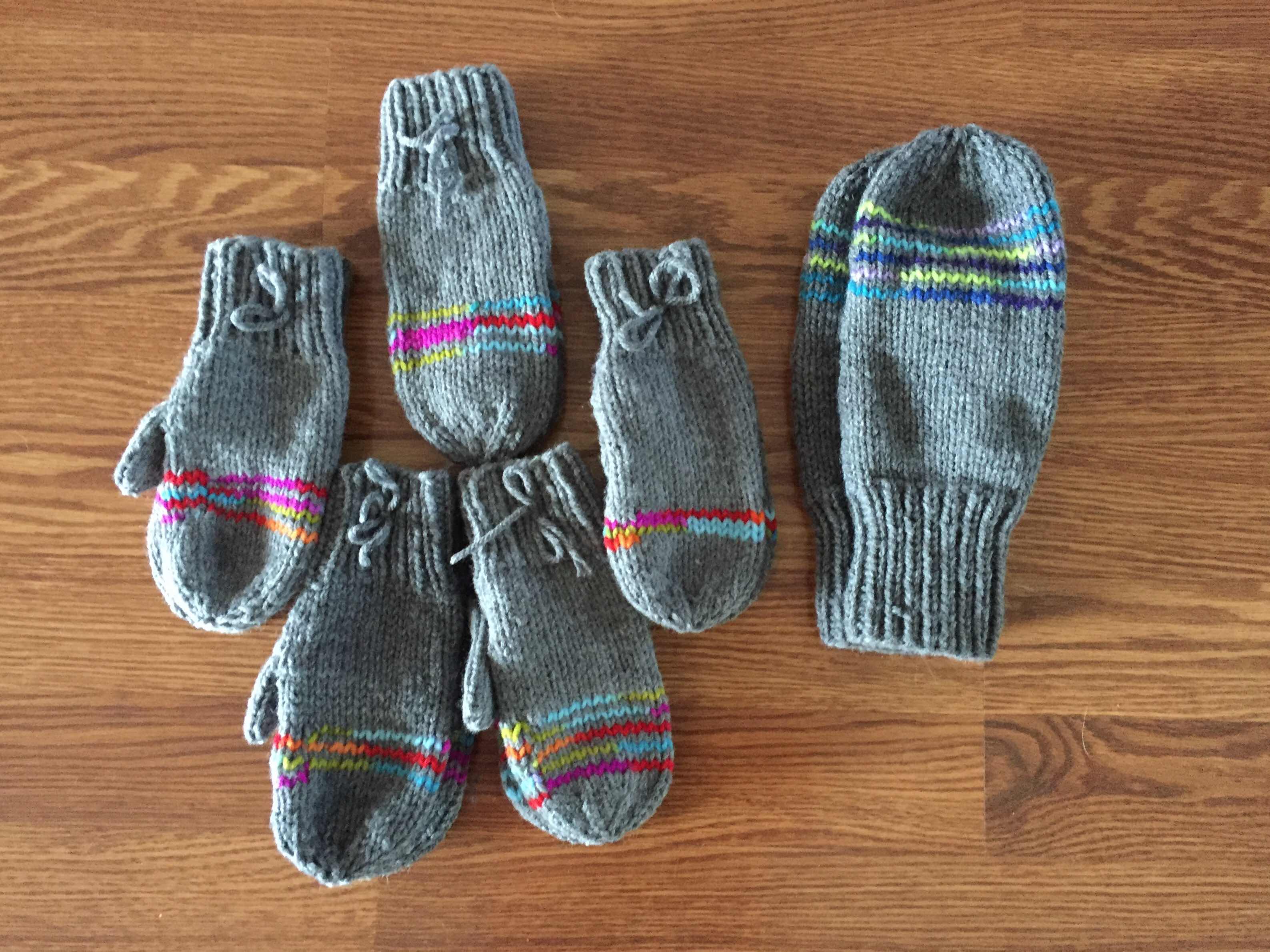 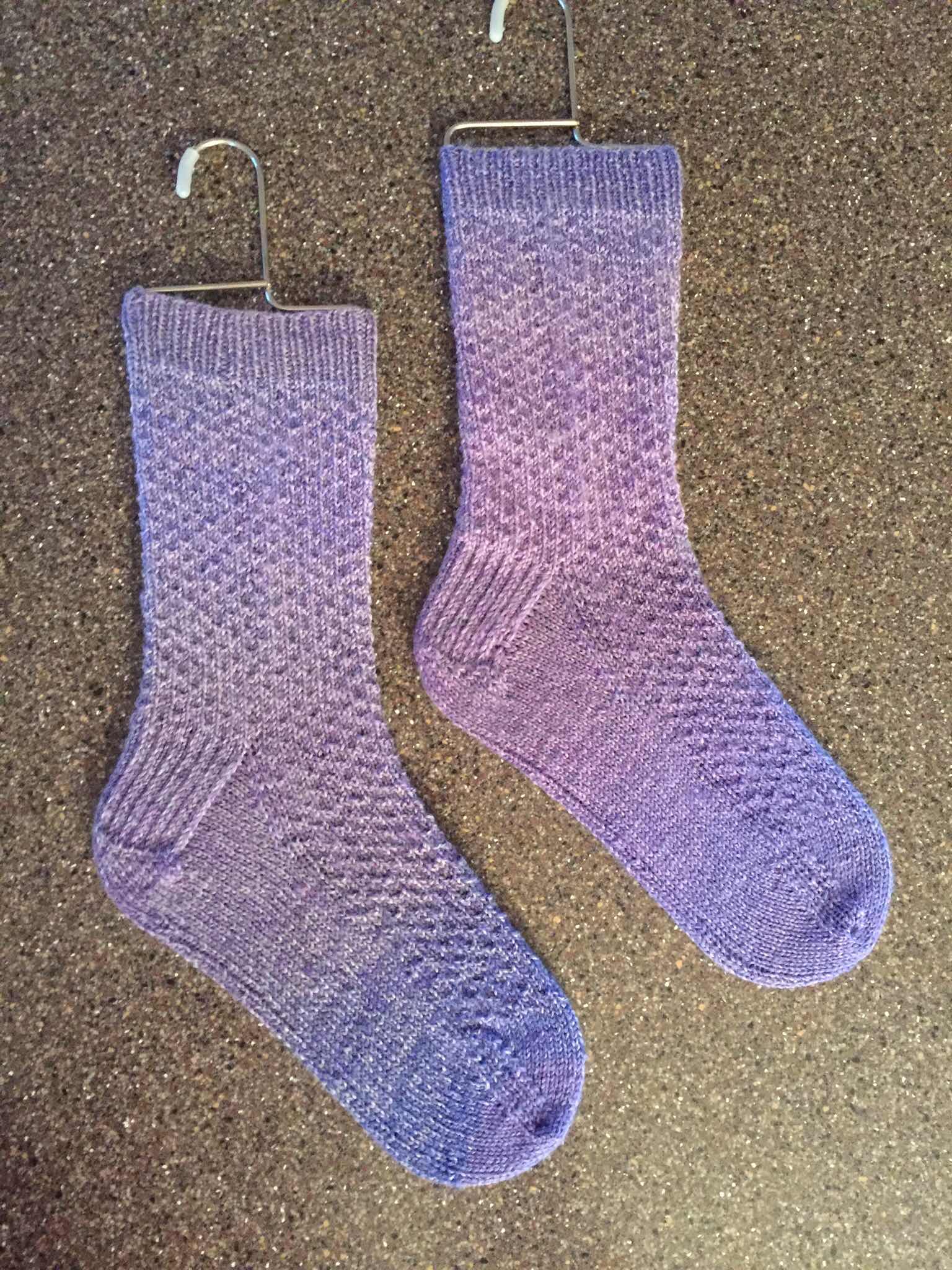 I also made a hat for myself. I have made several hats for myself over the last year or two, but I always end up giving them away. This was made with the leftover yarn that I used for my sweater, so I think I’ll be keeping it. It is a free pattern on ravelry and is called “Jasons Cashmere hat.”  I like the way the brim can be doubled over the ears for those cold days. Especially since I chopped all my hair off! 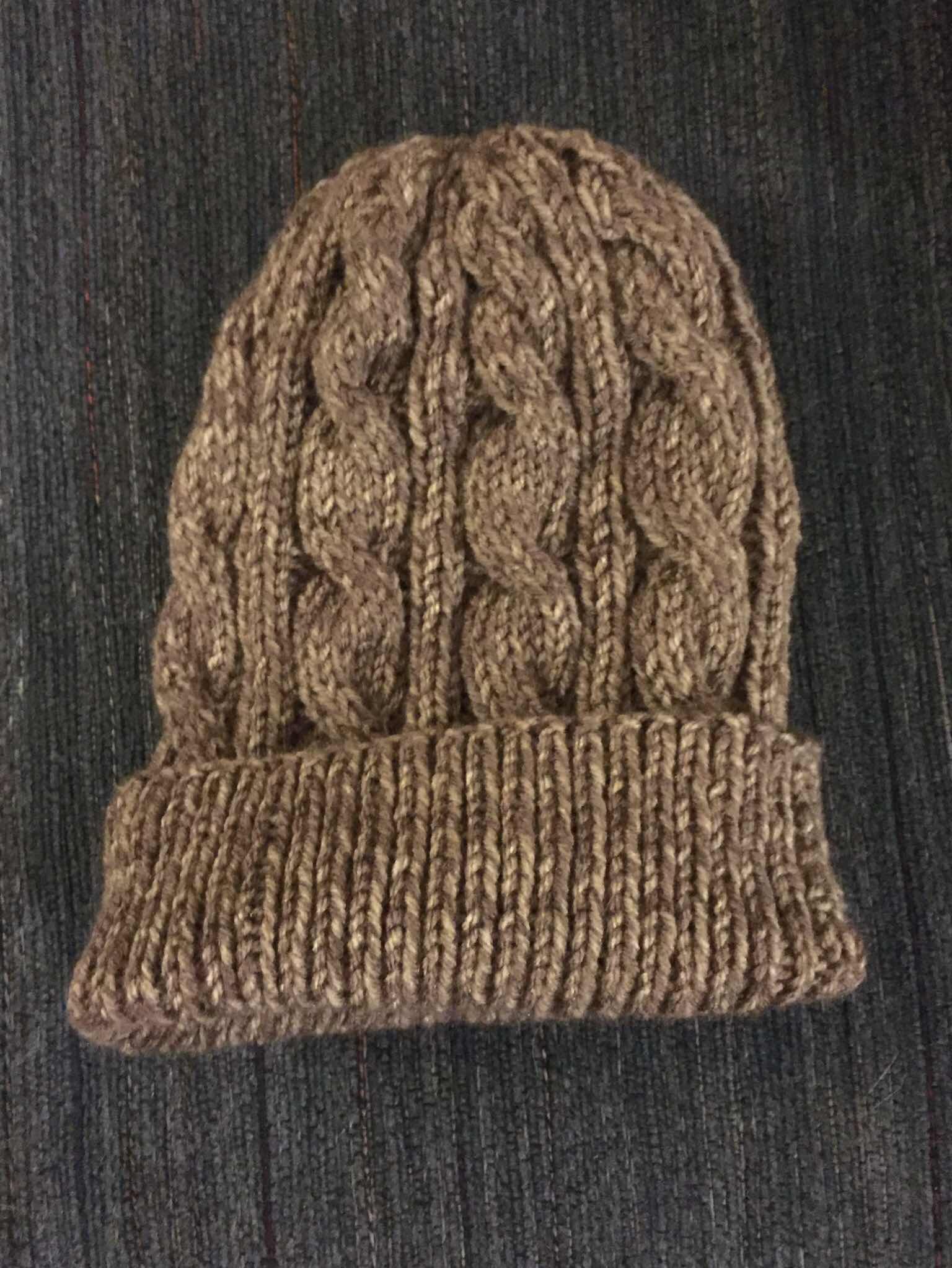 Just look at these cute unicorns. Piper, Aria, and baby Maddie were all unicorns for Halloween. This was not planned. Here they all are at great-grandma‘s house. I just love that Piper lives close enough to play with her cousins now. 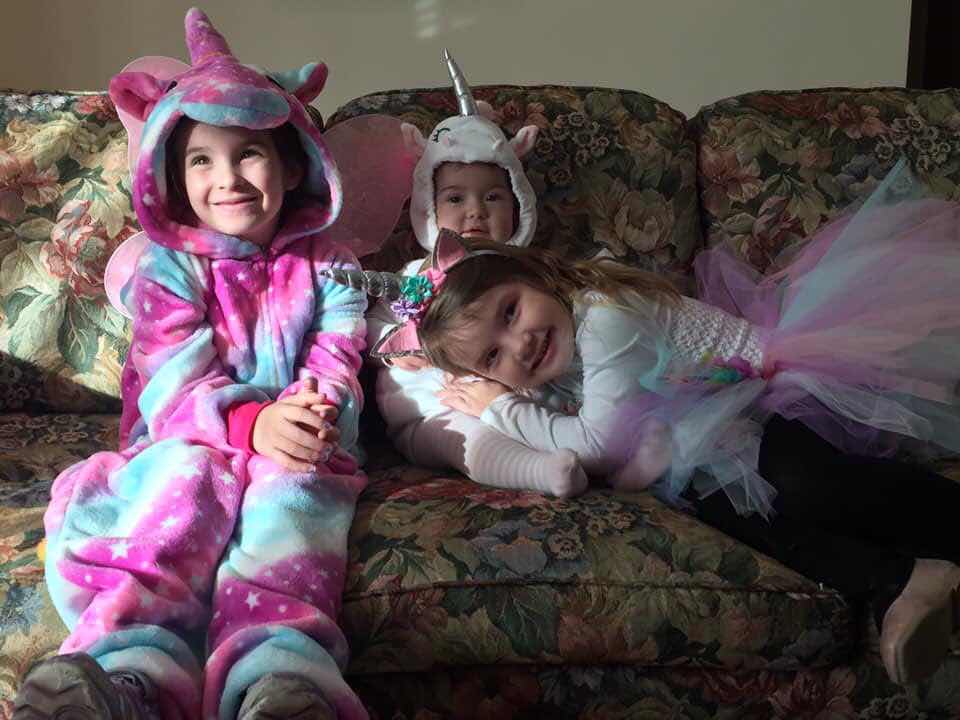 Then, they went trick-or-treating. Piper’s unicorn wings, (do unicorns have wings?)  :-) are blocking baby Maddie‘s face. I love how she and Aria are holding hands. 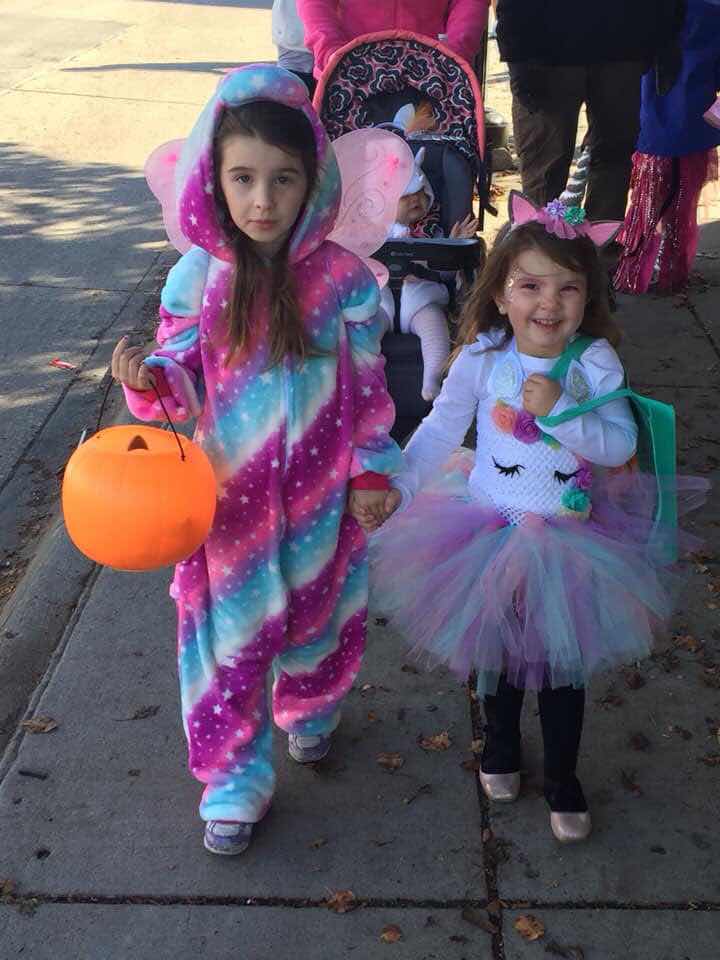 And the back view is my favorite of the three. Look at that unicorn tail! 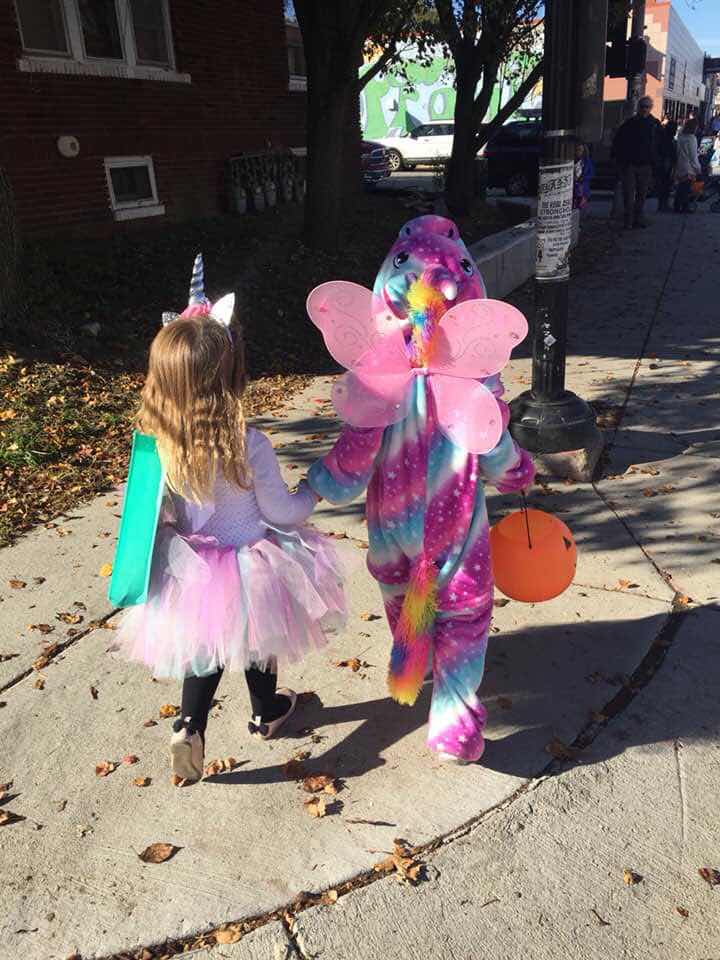 On Monday for dance class, the girls dressed up as princesses. Mandy had cut Pipers hair over the weekend. She put it in a ponytail and chopped off 8 inches! It looks like a professional cut doesn’t it?  She has such a pretty wave in her hair. 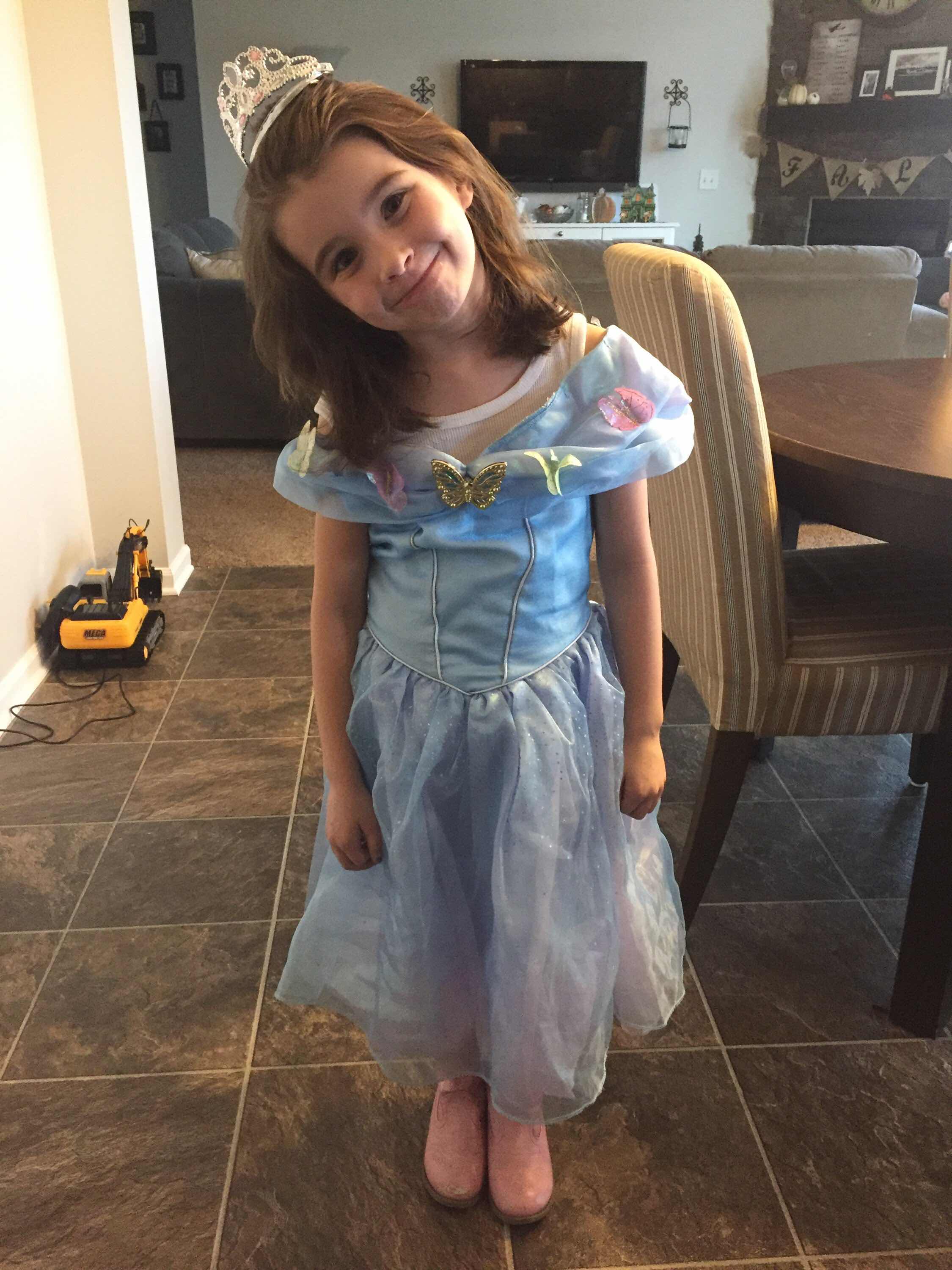 And here they all are. Such pretty princesses. 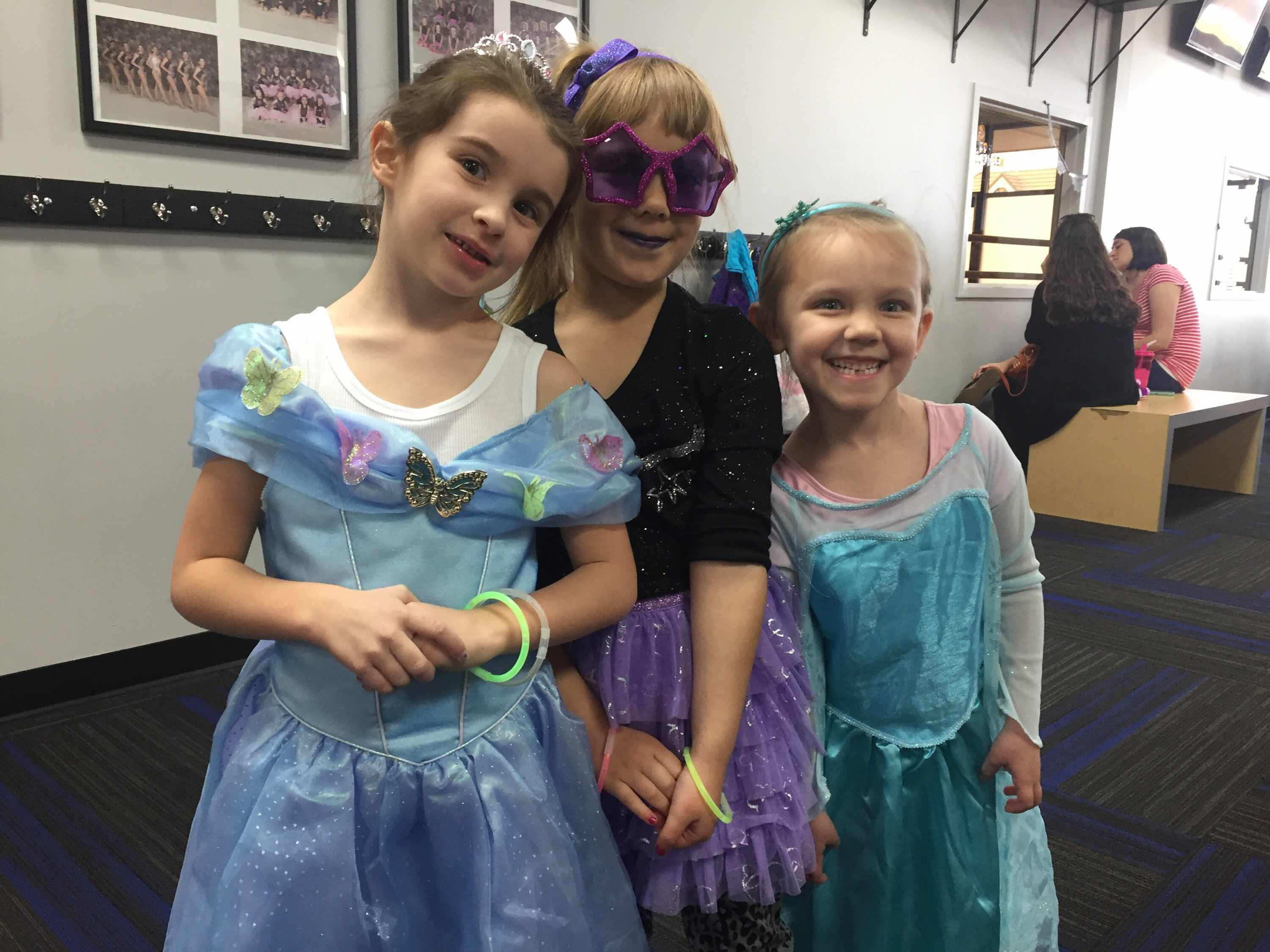 Sorry for the photo overload this week. I am just so grateful to Sharon for sending all of that yarn. Aren’t bloggy friends the best? It’s been a rough week here. Our heat went out on Saturday and it’s been getting into the 30s at night, 40’s and 50’s during the day.  The service man came out on Monday, ordered the part and fixed it Tuesday in the late afternoon. Wednesday morning I had my “every 10 year” colonoscopy. Unfortunately he found some things and I have to repeat it in six months. He removed several polyps and I’m having a little bit of pain today but it is already getting better. That preparation is the worst. I don’t even want to think about repeating it in six months!
We didn’t have any trick-or-treaters last night. I don’t understand it. When we first moved here we had several hundred trick-or-treaters every year. It has dwindled down to nothing last night. Just north of us a couple of miles another friend had 600+ trick-or-treaters at their house! That’s crazy! I’m not complaining though, I wasn’t looking forward to going up and down those stairs every time the doorbell rang last night.  I was drowsy pretty much all day from the anesthesia.
I hope you all are having a wonderful week.
“Above all, love each other deeply, because love covers over a multitude of sins.” 1 Peter 4:8
Blessings,
Betsy
Posted by Betsy at 1:59:00 PM