End of the week already?

My goodness! Is it just me or are the weeks flying by? I couldn’t believe it when I realized it was Friday already. There aren’t enough hours in the day to do all of the things I want to do.
We are supposed to pick up the new trailer a week from tomorrow. They are adding more solar on the roof so we can go boondocking for a longer period of time. They are also installing a backup camera. We looked around and it was only $50 more to have them do the camera install rather than us buy it and install it ourselves. We figure that is well worth the money to have it done correctly!
We have insurance in place after I talked to our agent several times this week. I have also found a place that we can store it, just a few miles from our house. That takes a big worry off of our shoulders. We knew we didn’t want to pull it up and down this hill and try to park it all of the time. When it’s missing it’s also a dead giveaway that you’re not home, to anyone who has nefarious intentions.
I picked up Lizzie for a play date with Zoey today and she’s spending the night with us. We will take her and Zoey to Mandy & Brad’s house while we go to the zoo with Piper tomorrow. The two of them are having a wonderful time playing. It’s grandma’s spa today. I’ll give Lizzie a bath and clip her nails.  Usually they get their baths at the same time, but Zoey got so muddy on our walk the other day she had to have hers early.
They are playing tug-of-war with a chicken! Zoey looks huge in this photo but Lizzie is really just a little bit smaller.  It must be the perspective. 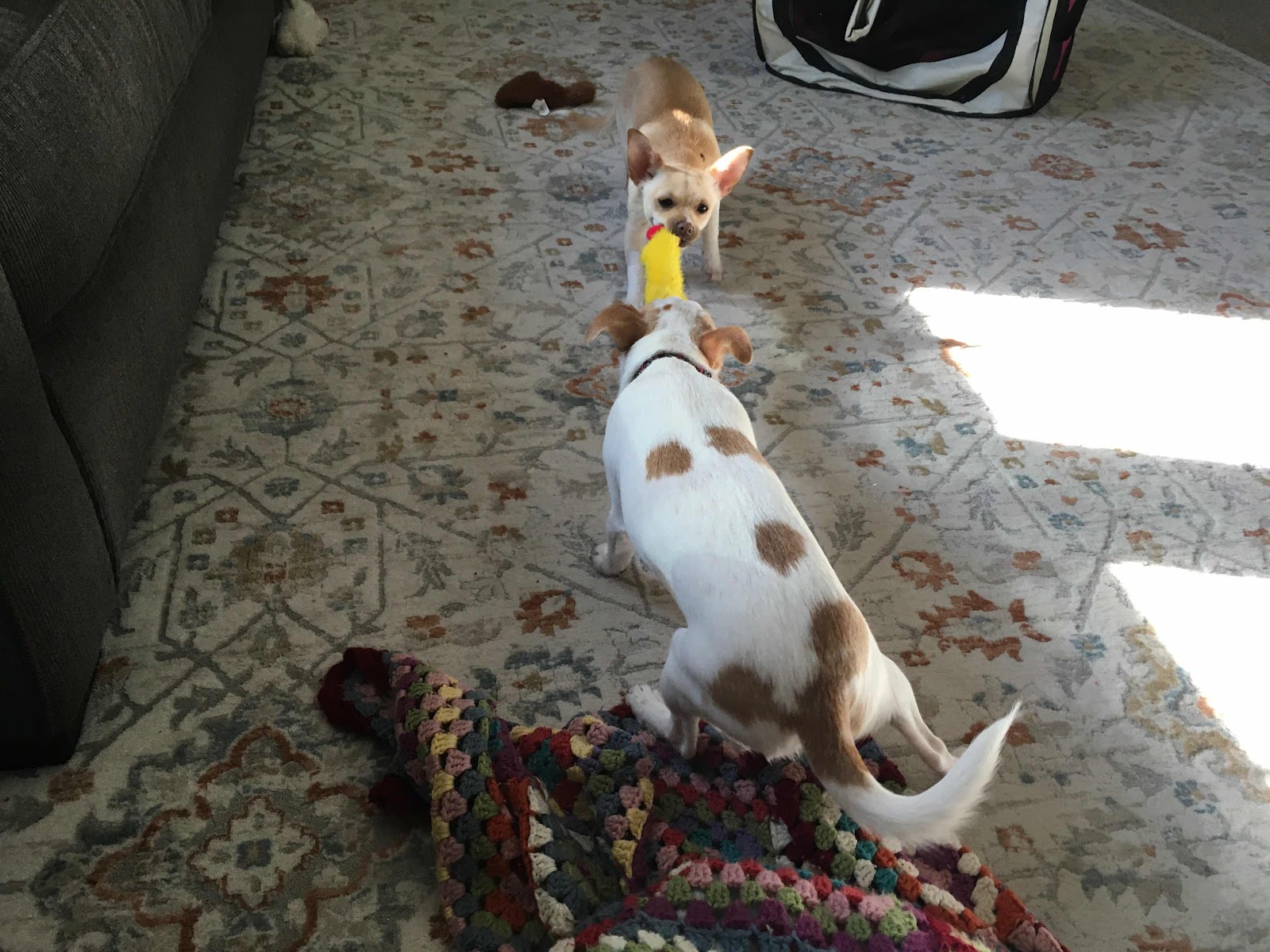 Their favorite places to play are in the patches of sunshine on the carpet. That thing on the floor is the doggie playpen that they roll around in. It’s the best puppy sitter! 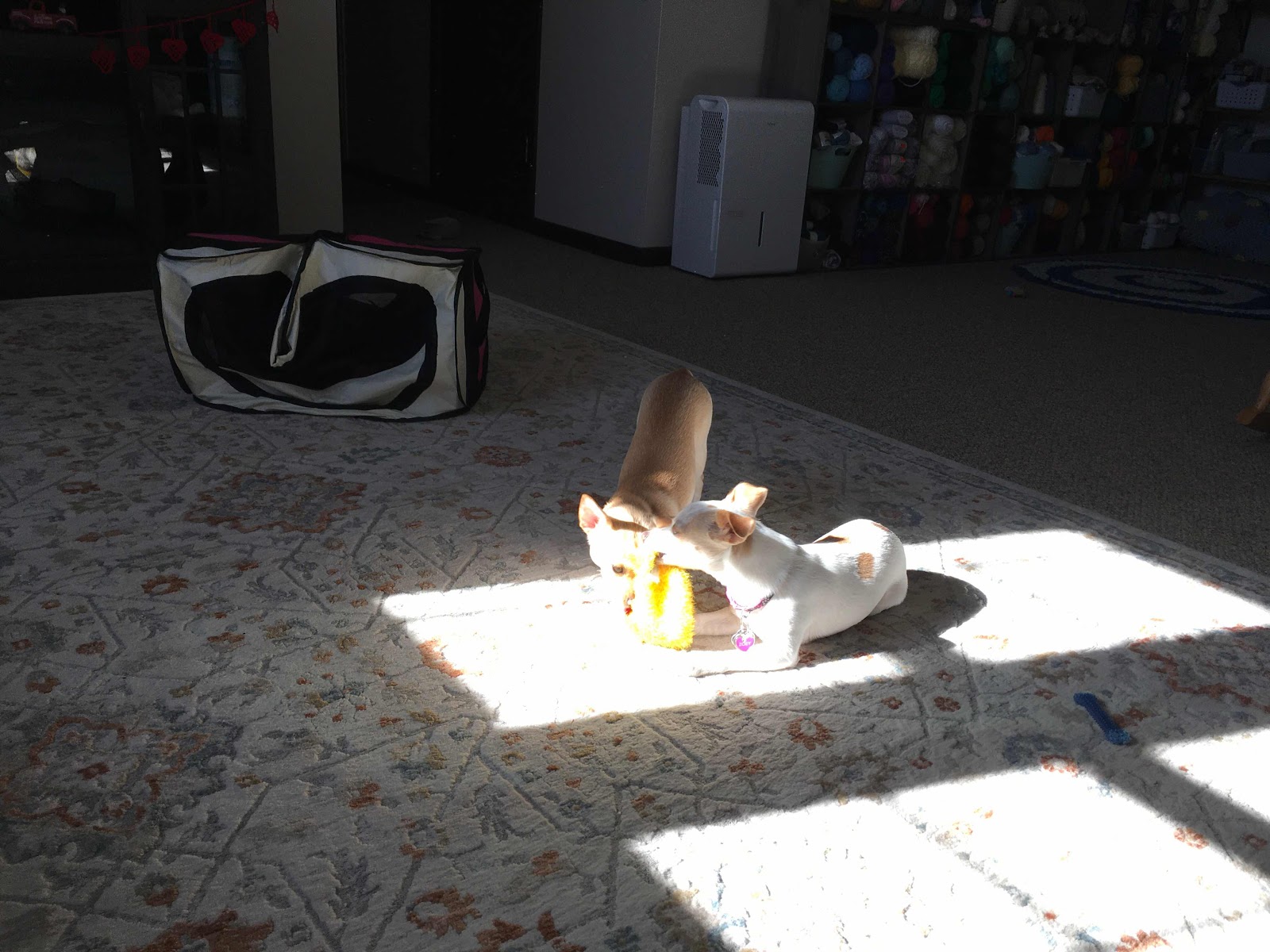 I ended up ripping out the sweater and remaking it. I couldn’t stand that one row of three stitches being wrong! I still have to wash it and sew the buttons on the sweater. I also made a matching hat and a pair of baby mitts. 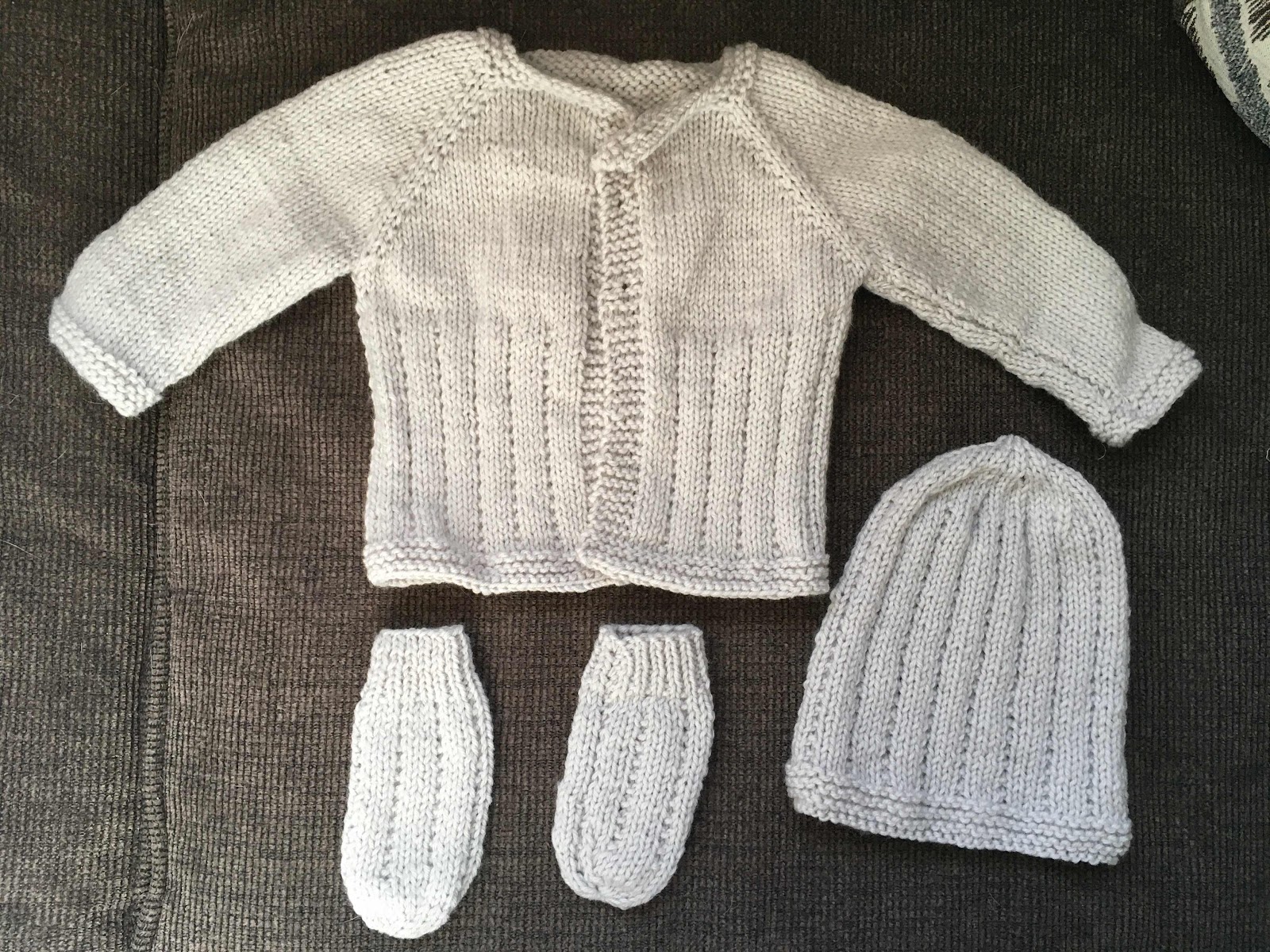 Two pair of mittens completed and almost another pair. 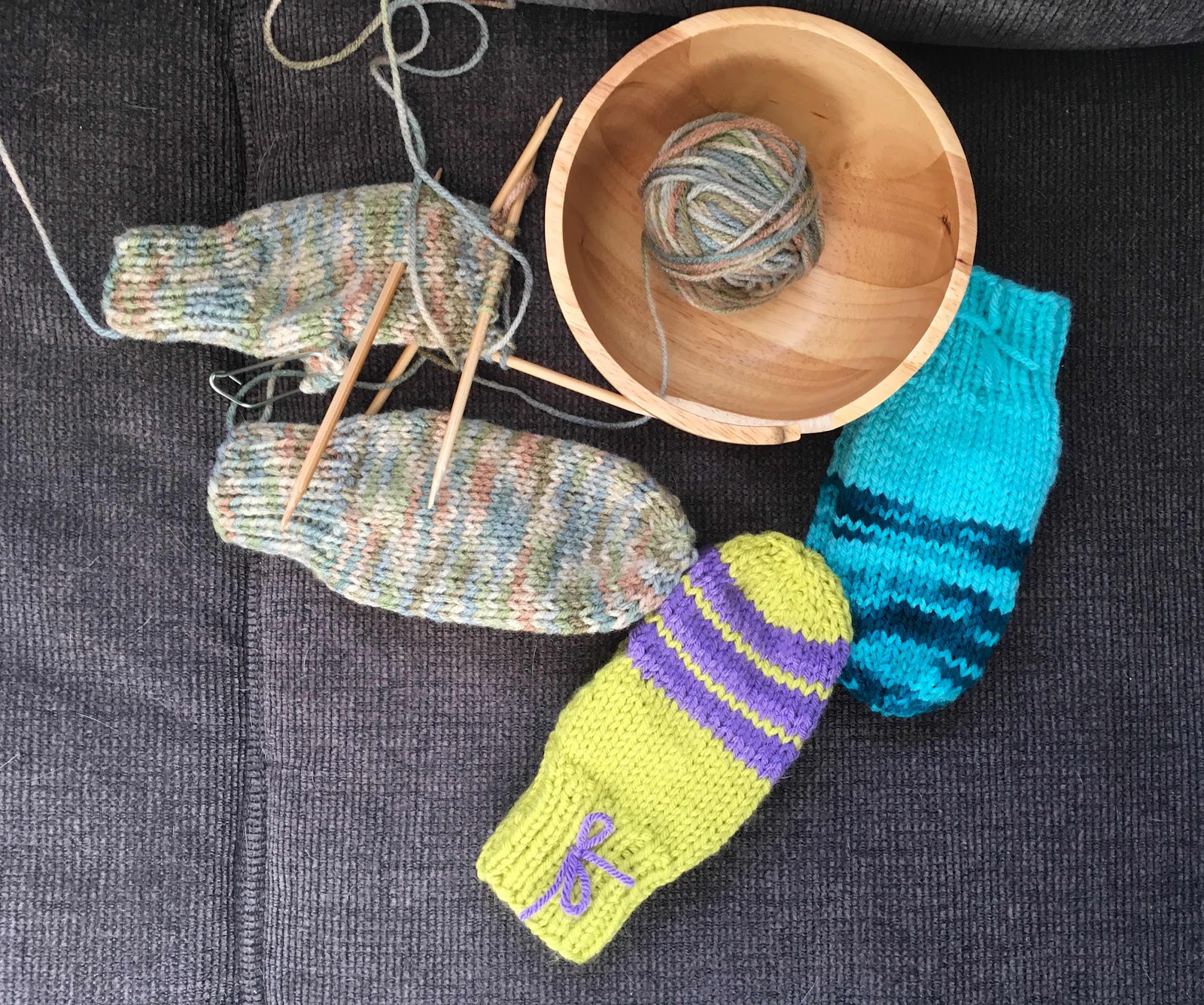 A little bit of progress on the socks. I did decide to just do a plain vanilla stitch because of the pattern in the yarn. 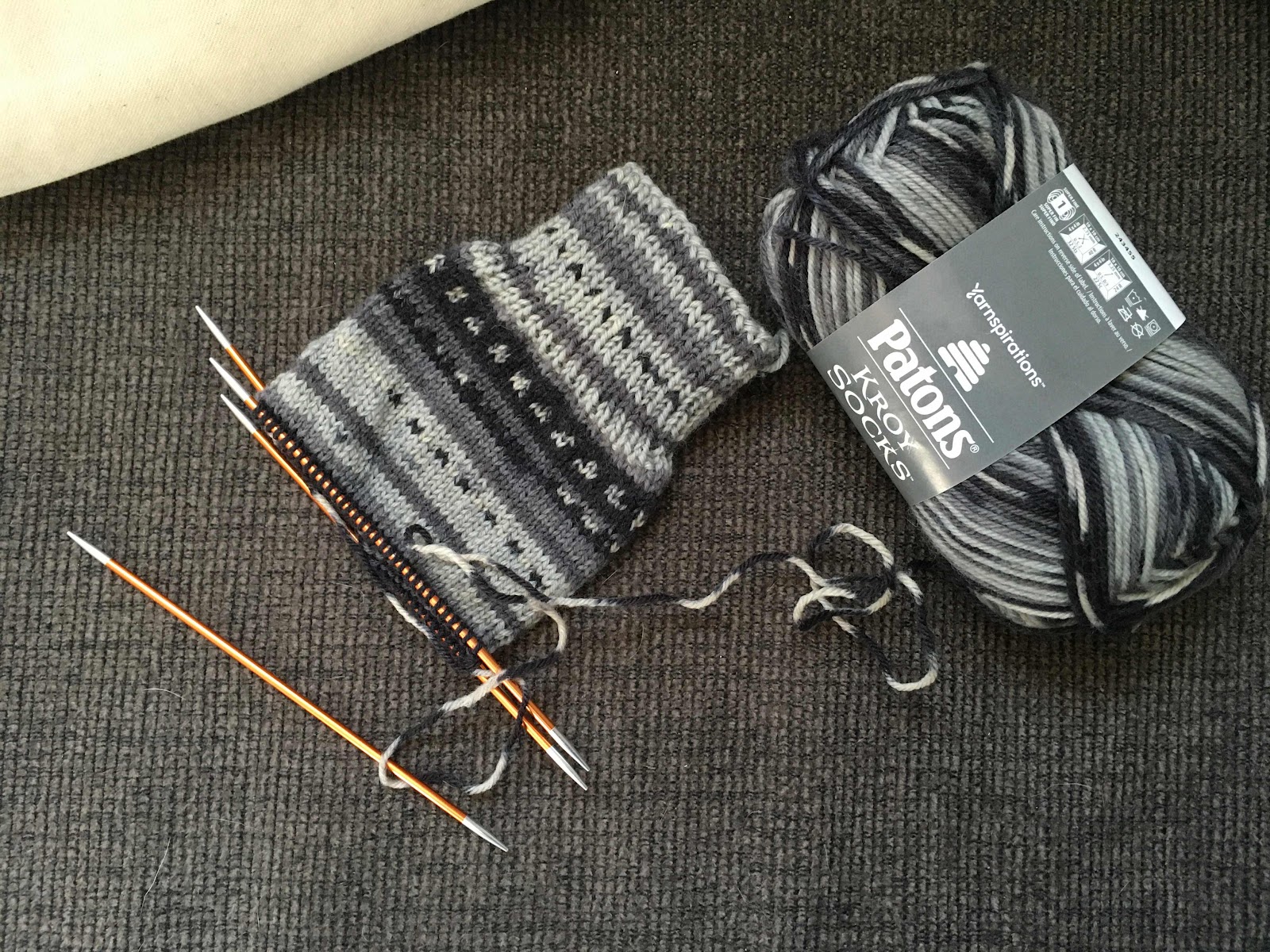 That’s about it. It’s been a crazy busy week. I took mom and I to the doctors on Tuesday to get blood work done. Mom‘s kidneys aren’t doing very well and so I have to take her to a nephrologist next week. Her A1C was also very high. Mine hasn’t changed since November so they’re leaving me alone. Then Dennis had to go yesterday to have his bloodwork done. His A1C is still high, but it has been for 10 years. He’s been borderline diabetic all this time, but his A1C never seems to change. Oh, the joys of getting old.
The floor refinishers called and asked if they could move up the work by one week. So instead of being here a week from Monday, they will be here this coming Monday. Which means we have to get everything cleaned out of the living room and dining room and take the pictures off the walls. We’ll stay at mom‘s house for a few nights because they said we can’t stay in the house. We’re trying to figure out where Dennis will be able to work. Mom doesn’t have Internet, so he had planned to just move his computer to our basement. We’re not sure how he will do with the fumes though. After that they just have to put the door jams on the floor from the two bathrooms and I think we’ll be done with everything. Hallelujah! Brad and my nephew Tim are coming over Sunday after church to help Dennis move all of the furniture down to the garage. What a pain. I don’t think we will ever do anything like this again. Although we are so old it probably won’t need done again in our lifetime anyway.😂
I hope all is going well for all of you. Did you all survive the ice and snow? 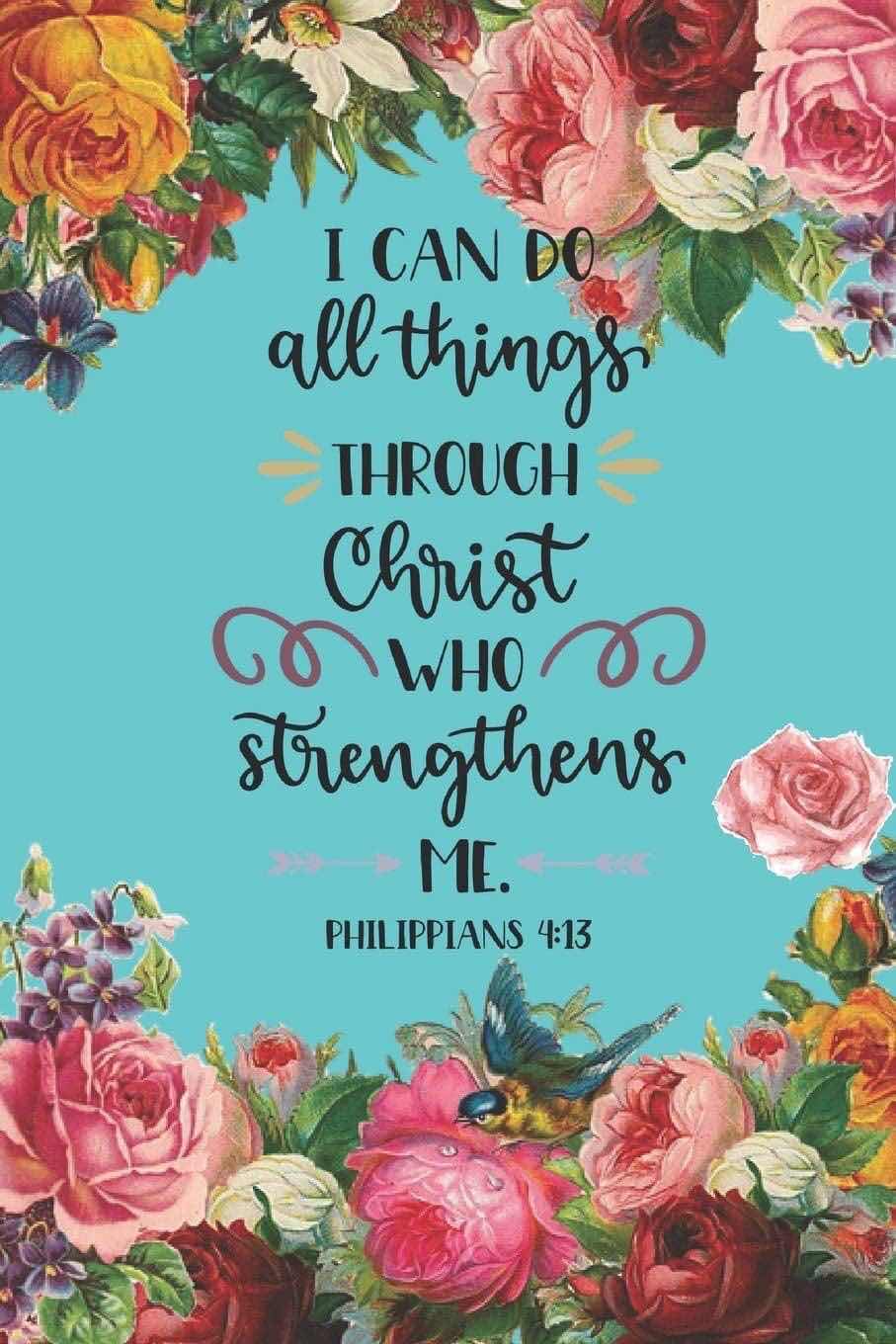