I finally finished all three of Piper’s sweaters. I washed them yesterday and sewed the buttons on last night.  This morning I took them to the post office. I’m so excited to see her wearing them.  As you probably remember, I have already sent her the white one and she wears it constantly.
The red one.  Knit with Red Heart Soft in the “really red” colorway. 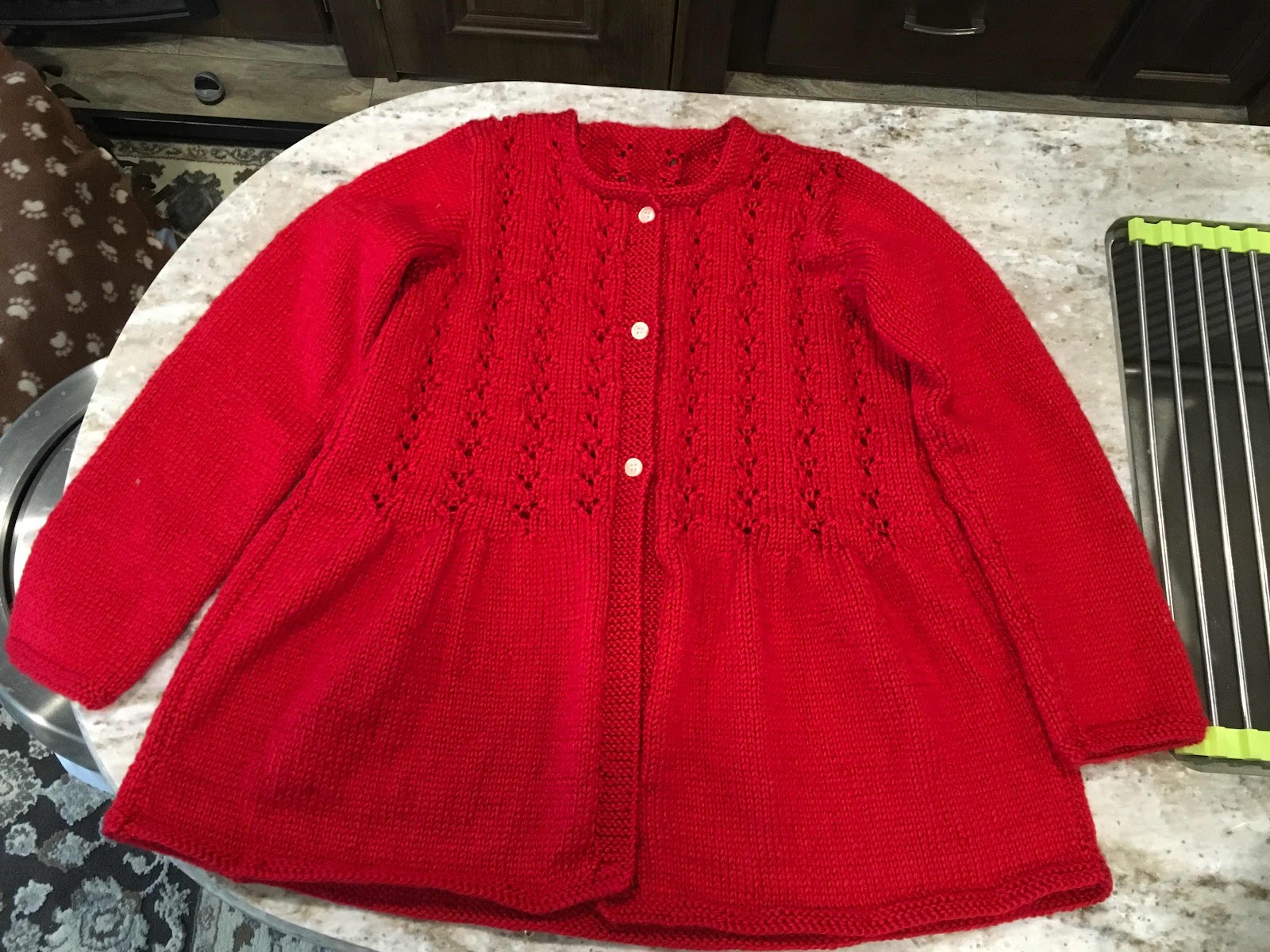 I have no idea why the hems are turning up on these three so significantly, unless I didn’t take them out of the dryer quick enough. The pattern calls for just two rows of garter stitch and I always do four to help with the rolling. Hopefully as she wears them they will get better. 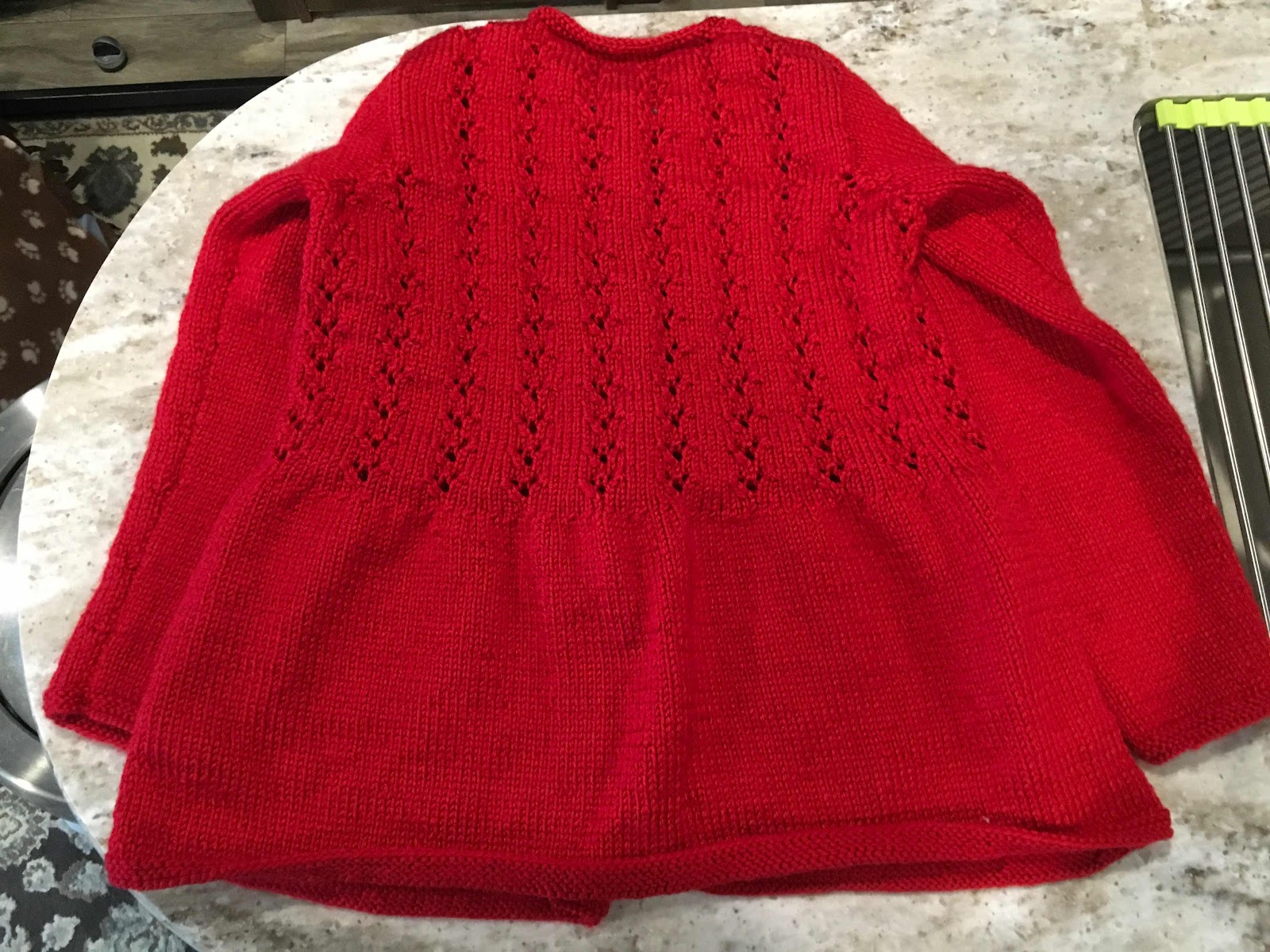 This is really just a little bit darker pink than it showing up here but not much. I took the photos early this morning and the lighting wasn’t very good. I’m just showing the back on this one. 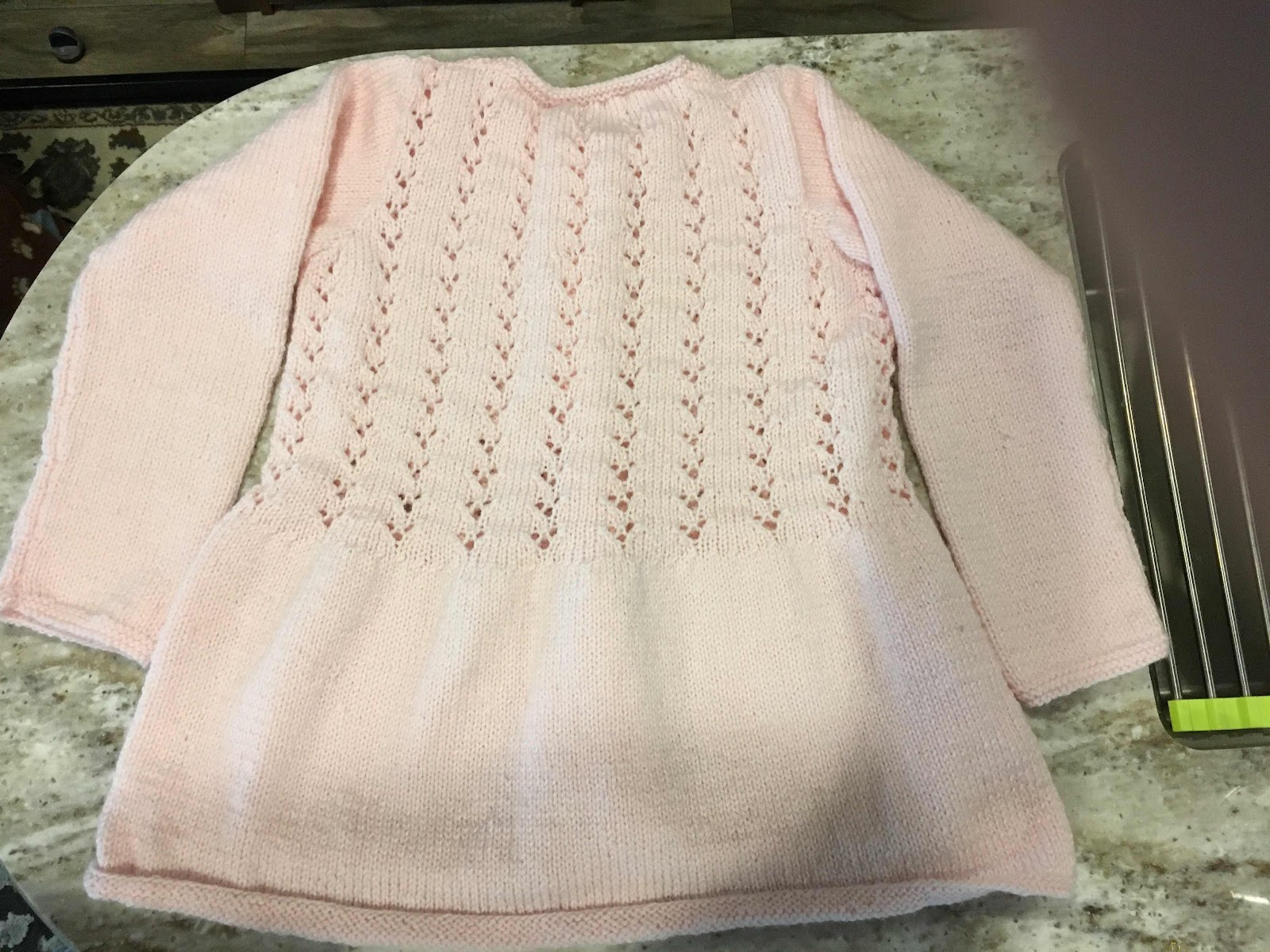 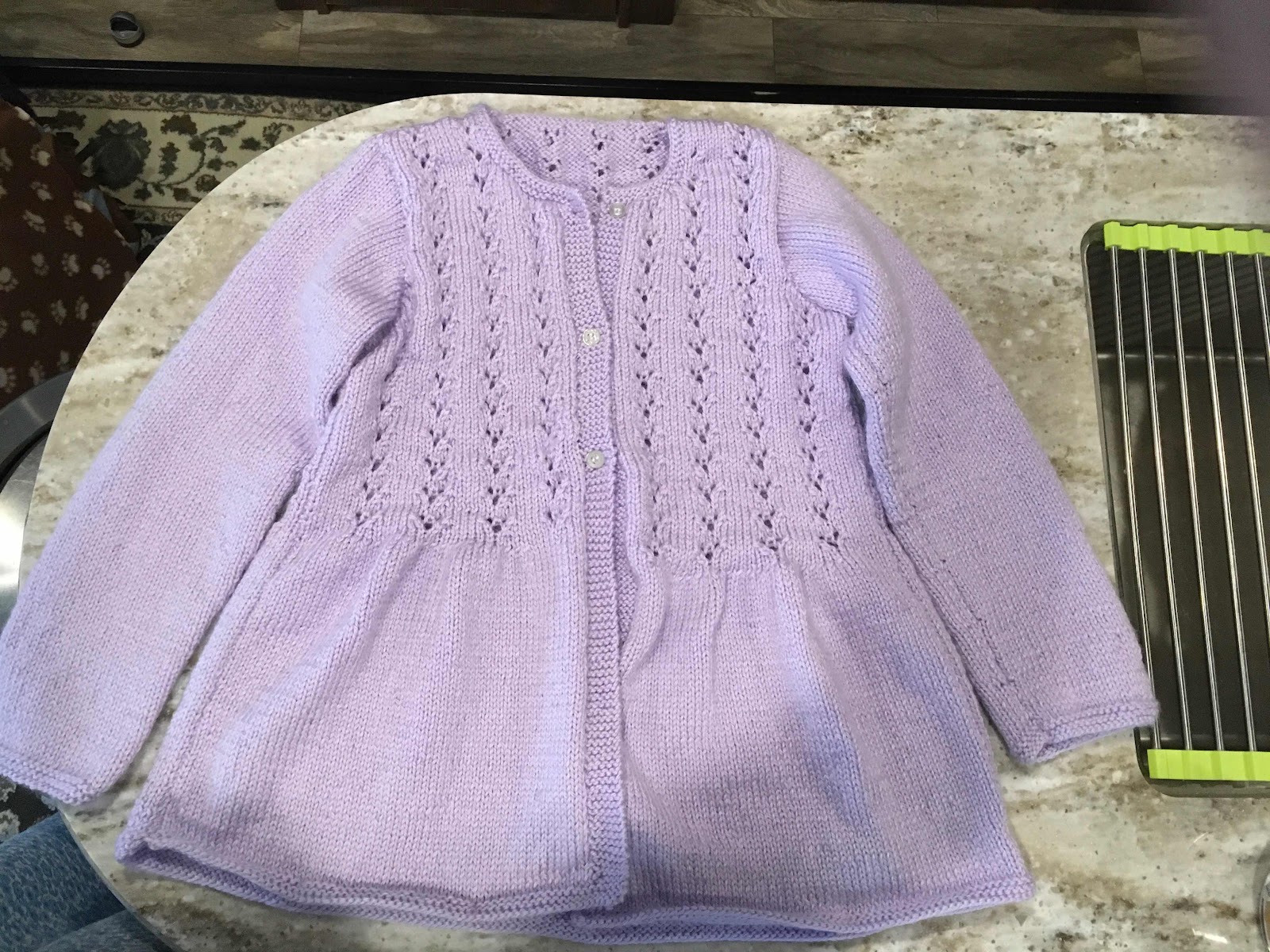 I got this quarter with some change last month and I’ve been saving it to put in the package to send to Piper. Isn’t this a cool thing to put on the back? Bats! It says American Samoa on it, but I had originally thought it was representing Carlsbad Caverns because of the bats that fly out of the cave at dusk every night. 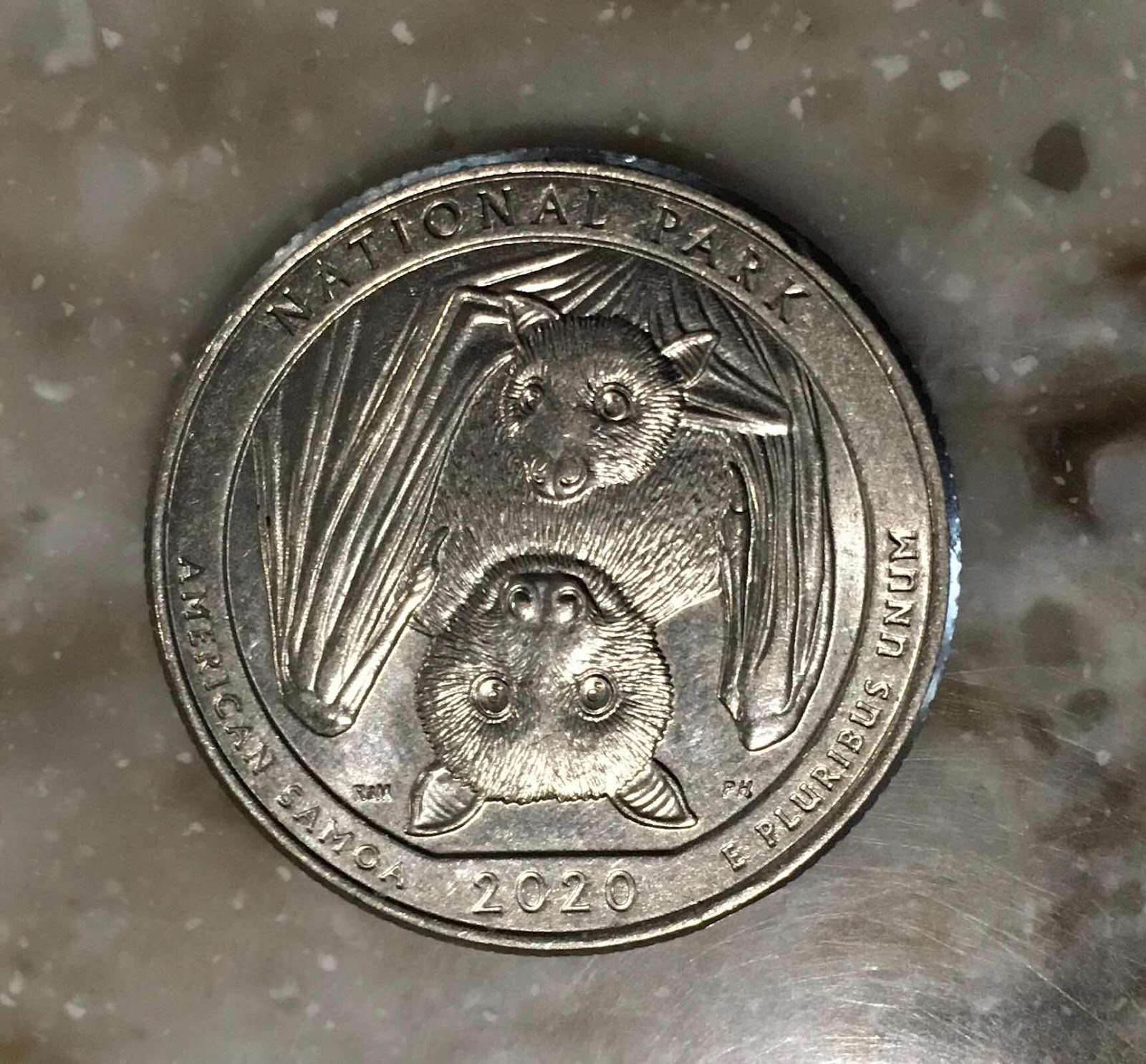 I took this last Friday afternoon when I took Chloe to the dog park. One of the kids who lives here in the park was there building a snowman. We ended up with 7 inches of snow on Friday. It was the perfect snowman snow. Very wet and heavy.   At this point it was still snowing and we received several more inches. 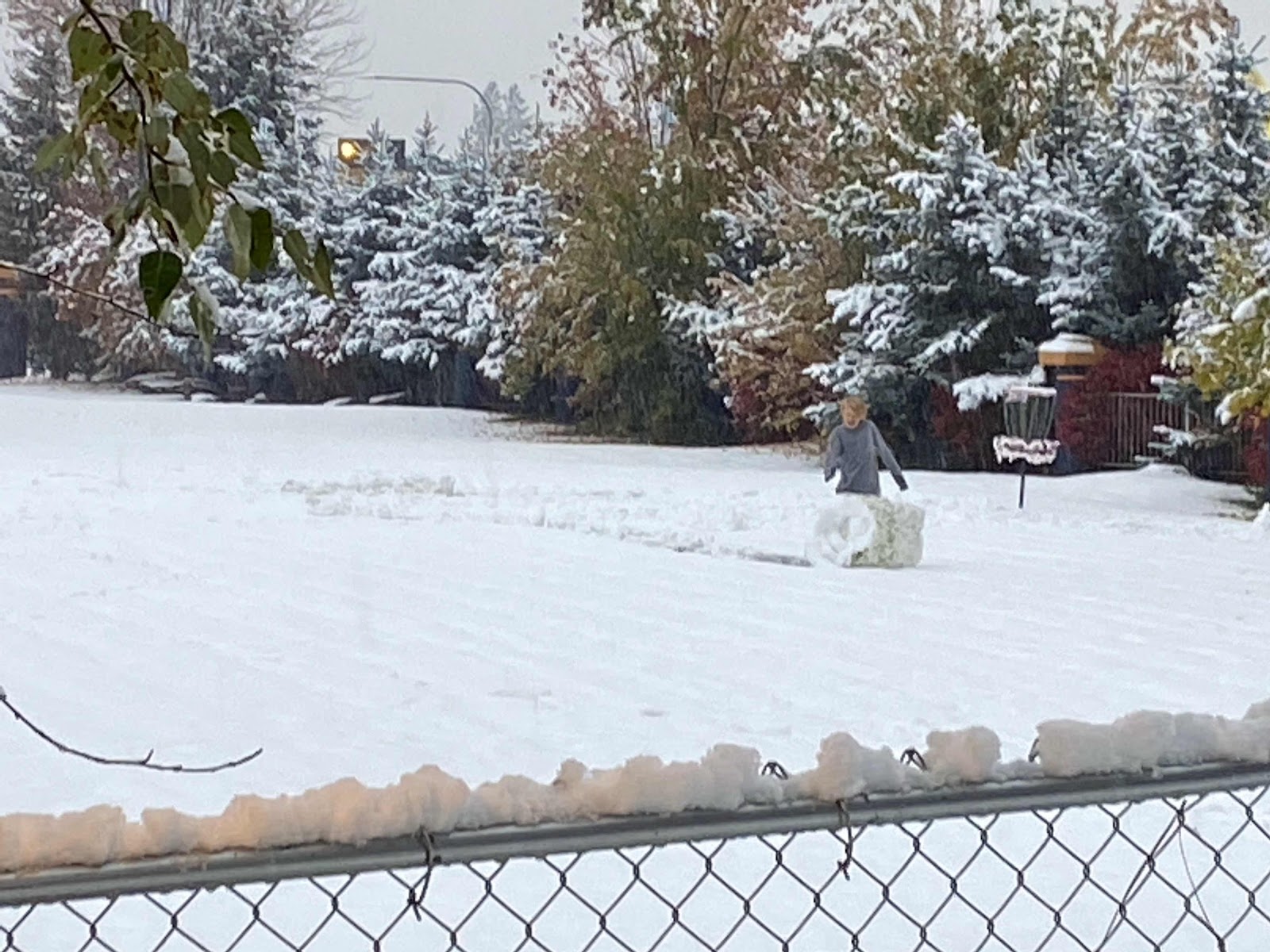 Yesterday the skies were bright blue, but you can see we still have some snow in the trees.   Many of the trees around town still had their leaves on them and with such a wet snowfall there was a lot of damage around our area. There are some people who still don’t have electricity. The temperatures have been very cold since then, although they are beginning to warm up a little bit and we’re supposed to be in the 50s by the end of the week. 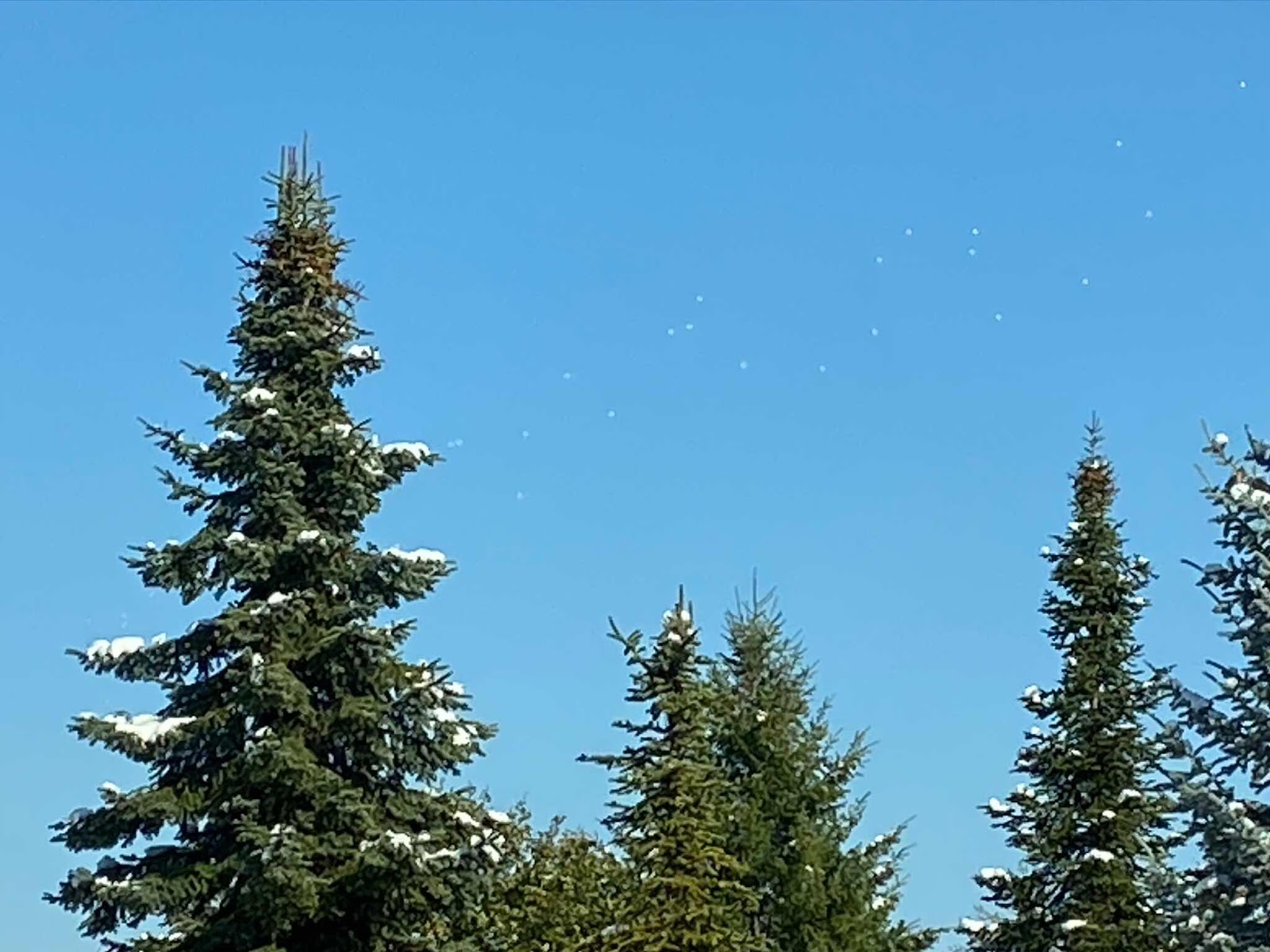 We have tried all kinds of things to keep the moisture down in the trailer since it’s gotten so cold. It was in the single digits all weekend. We had a small dehumidifier that was supposed to be good for up to 450 square foot, which is a lot more room than we have! It did absolutely nothing. So we ordered this unit from Amazon last week and received it in just two days. It is supposed to be for a 2000 square-foot house! It is working wonderfully. Every evening I pour out about 2 gallons of water that it has collected. We are opposite of most places. We have very dry air in the summer when it’s hot, which is wonderful.  In the winter we have a lot of humidity, which is normally good too, but not when you’re living in a trailer. It can cause mold and mildew and we do not want that. So far we’ve been very happy although it does take up a lot of precious floorspace. 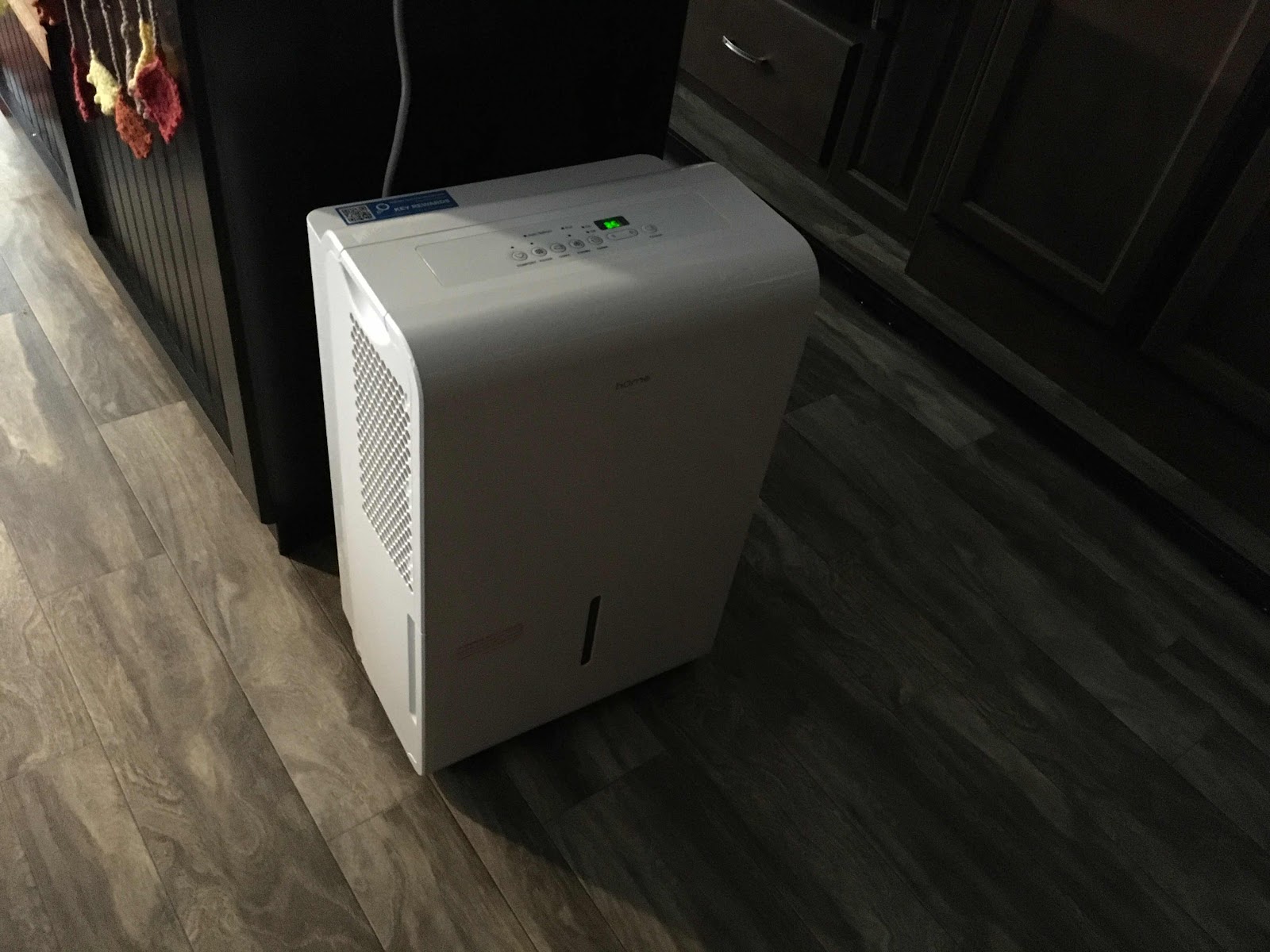 This post worked out very well for some reason. I would type a sentence or two or add a photo and then save it in drafts. Maybe that’s what I’ll have to do from now on. Hooray if that works!
We had to buy four new tires for Dennis’s new truck. We knew that when we bought it, but boy howdy! Tires are expensive!  We should be set for several years though.  I think we finally have everything set up very well for winter here at the trailer. The new manager has been very nice to us but I just found out today that the park is no longer having automatic deliveries of propane. We have to set up our own account with someone here in town. It was so handy before. A delivery truck would come to the park and fill up everyone’s propane and whatever the amount was that it took to fill our tanks would just be added to our monthly rent payment.  New owners! Everything always has to change. The office also had a very nice stock of emergency RV supplies. Those are gone now too. That doesn’t make a lot of sense to me considering how many RVs are here at the park and something is always breaking on these things. Oh well.
We are very cozy and content in our little home on wheels. I just wish it could be down in Florida by Cindy’s, (Delighted Hands), house instead of up here in the snow. She has the most gorgeous flowers in her yard. You should check out her blog post from this morning.  I guarantee you won’t be disappointed.
With all of the numbers for Covid going up around the world and the elections here in the US, things are very stressful for a lot of people right now. Most of you remember Karen, Dennis‘s sister who just passed away last month from pancreatic cancer. Her husband Howard and their son Nathan were tested today for Covid. If you would pray that they turn out to be negative I would sure appreciate it.  Howard made a big pot of stew on Sunday and took it over to Mom’s house and spent several hours with her. That is worrisome. Both Howard and Nathan are showing symptoms and I am very hoping that it’s just colds that they have.  Mandy is quite concerned. She spent the entire weekend last weekend administering Covid tests at work. I worry about her too.
I am definitely trying to turn all of these concerns and worries over to the Lord and not try to carry them on my own. I’m thinking of and praying for each of you too, as I know we all have our own things we are dealing with in our lives, especially now.  May the Lord bless and keep each one of you. 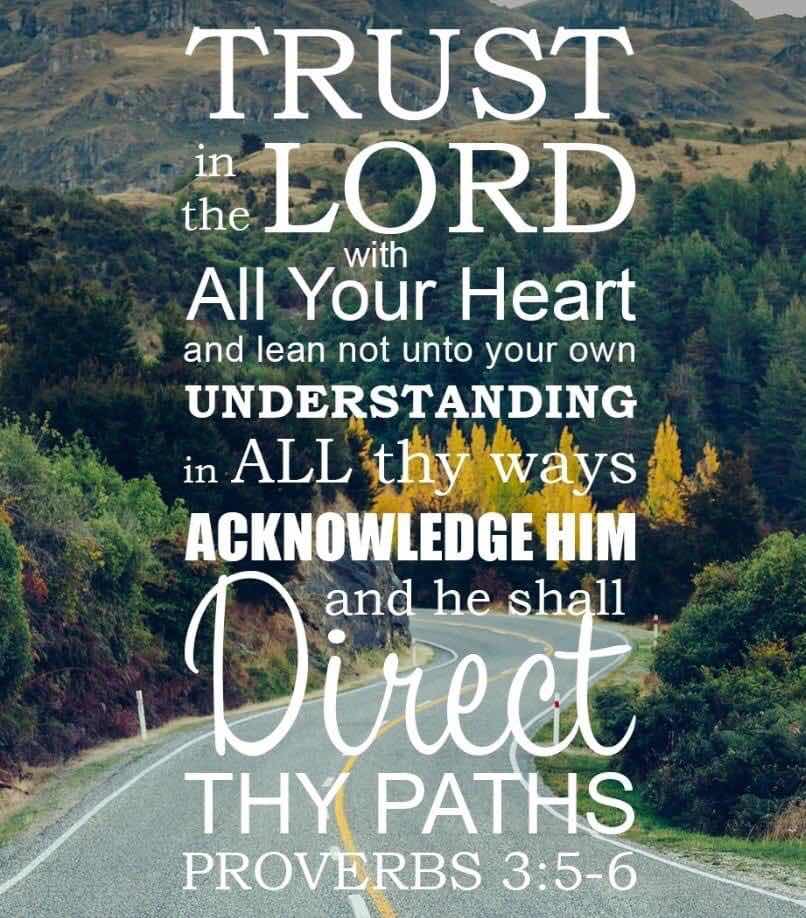