Hi everyone! It seems like a lot of the country is getting rain right now. We went quite a while without any, but the last few weeks have been rather damp. It poured constantly from about 2:00 yesterday morning until about 9:30 this morning. It is supposed to rain more this afternoon too. Everything is damp and it’s dreary out and it sure feels a lot like fall.
This is the most colorful tree in our neighborhood. It’s in Dennis’s cousins yard right across the street. Not the best picture, but it’s raining again and I wasn’t about to go stand outside to take a photo. 🍁🍂🍁We’ve also had very high winds that have blown most of the leaves that have changed, off of the trees. 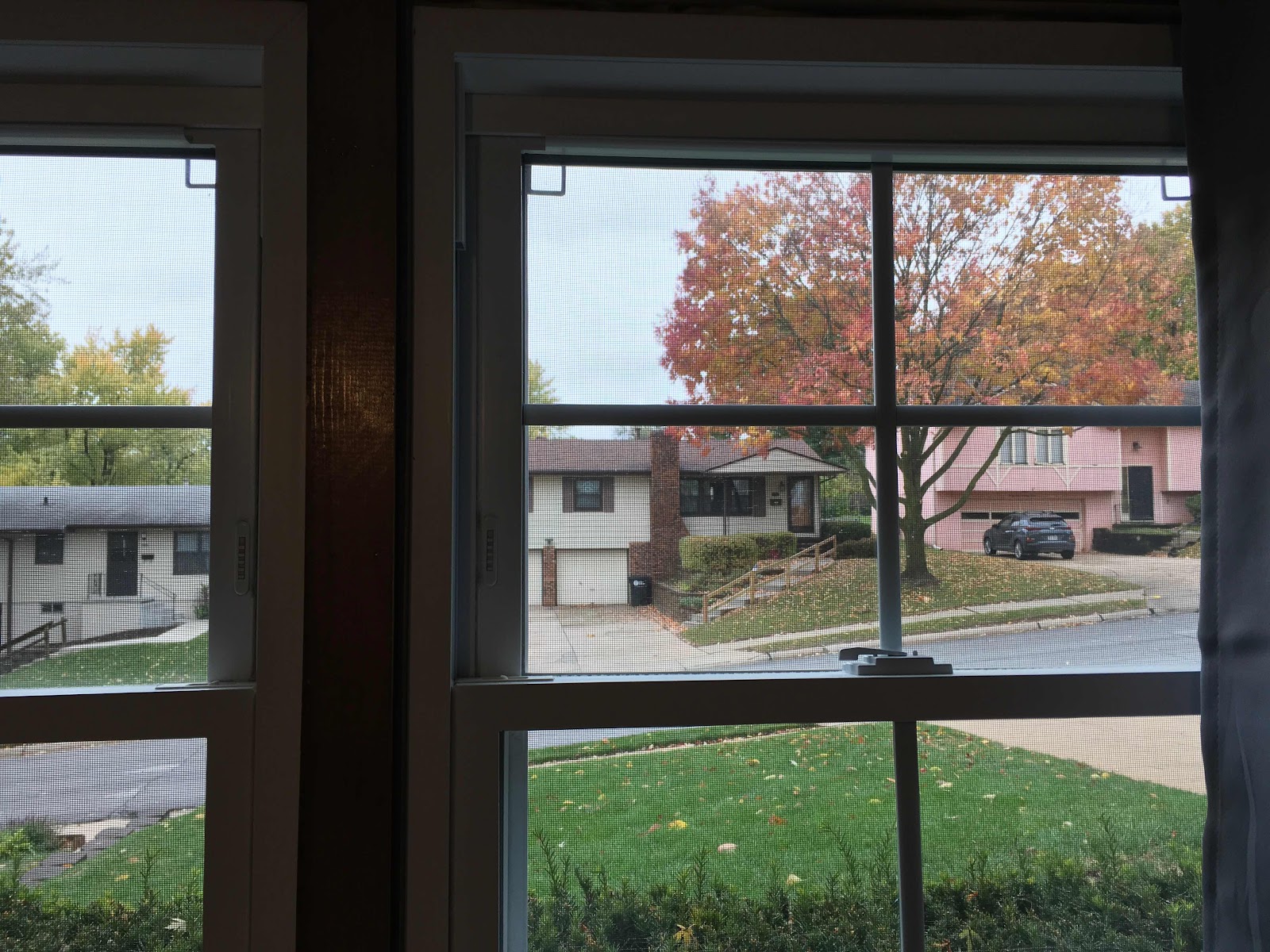 Since Zoey it’s so little, she can fit under several portions of our fence. Plus, the previous owner took the gates off and they are an unusual size so we have not been able to just let her run loose in our yard. We bought this little fence and have had it just past the patio on the grass and it’s worked perfectly for her. We can move it around wherever we want it in the yard. Now, with the rain and the snow on the way, we bought this patch of pet grass. Apparently it’s not regular Astroturf, but don’t ask me the difference! We put it under the deck during the past few days of heavy rain and it’s worked a charm. We don’t have to go stand in the rain and she can go potty without getting completely soaked. Enough rain blows underneath that it washes the mat off well too. 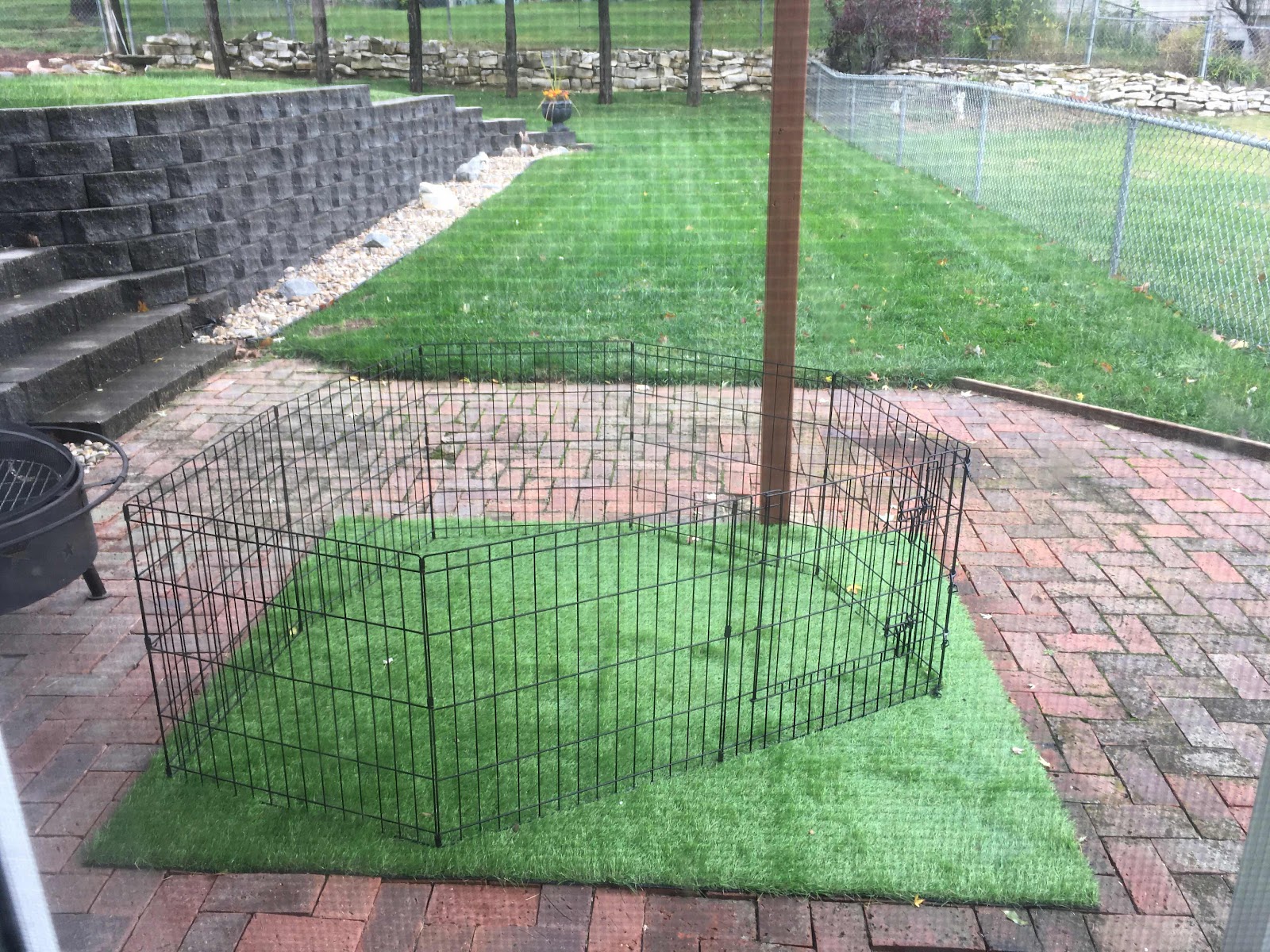 I finished the wrist warmers for our granddaughter Kyleigh for Christmas. The pattern is “Cloudburst” by Arienne  Gray.  They were quite fun to make and very quick. Although I was worried about the chart, they also had written instructions that I haven’t noticed before. I have no idea what the yarn is. I’ve had it for years and years. They are blocking today. I like to wait to sew in the ends until after blocking. 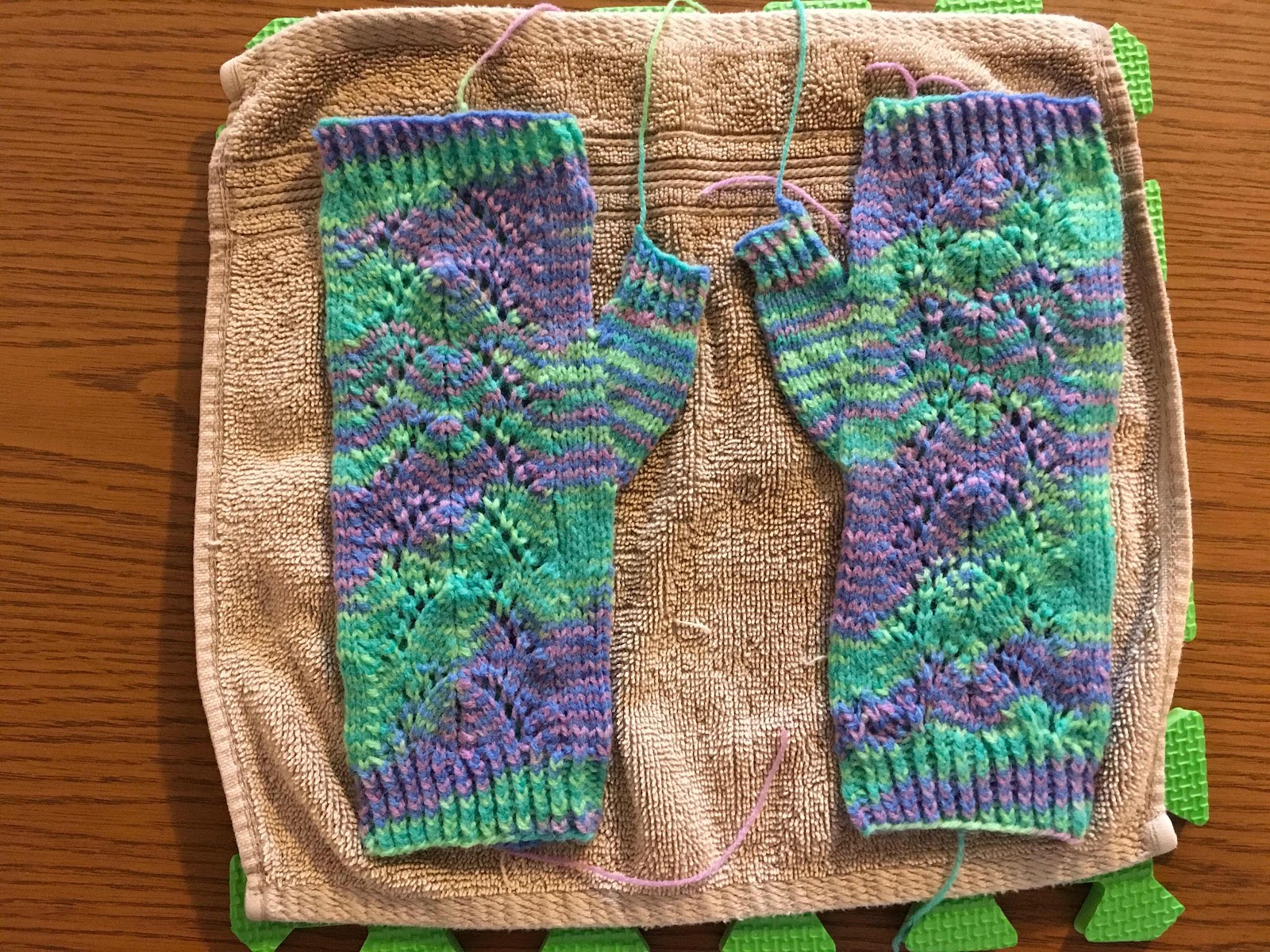 This is the prayer shawl that I’m working on for the medical center. I just began the second skein and I think it will be big enough with just the two. If you remember, these are the two skeins I got for one dollar each at Michael’s in their clearance bin. I believe they are cakes that were pulled out and so could not be sold at the normal price. There is absolutely nothing wrong with them though. The yarn comes out just like a normal skein. Such a deal. I’ll have a 24 inch wide by 5 foot long shawl for two dollars and it’s very soft!! 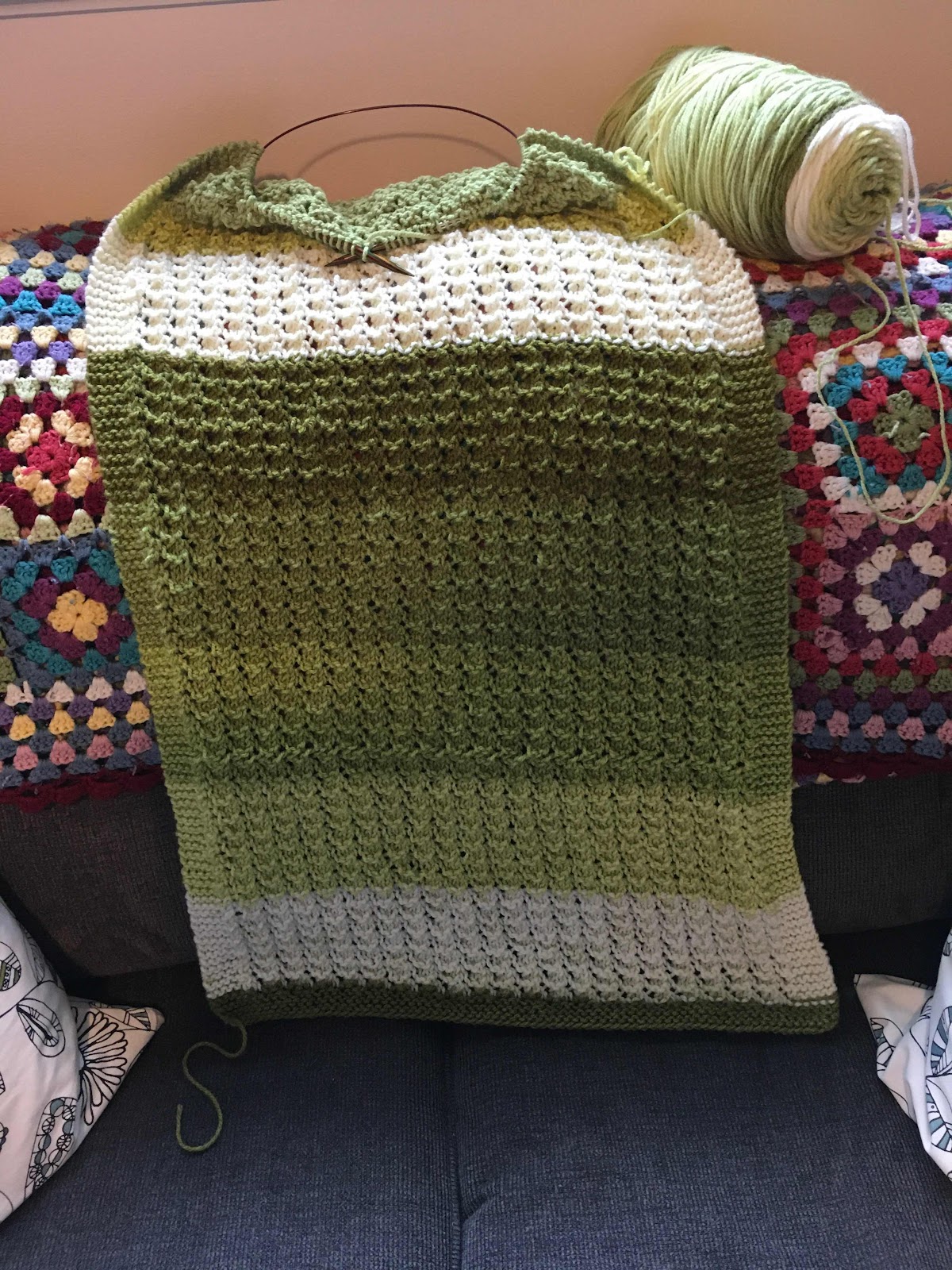 I have been working on stocking our pantry since we moved into the house. I re-organized it a bit a few days ago. 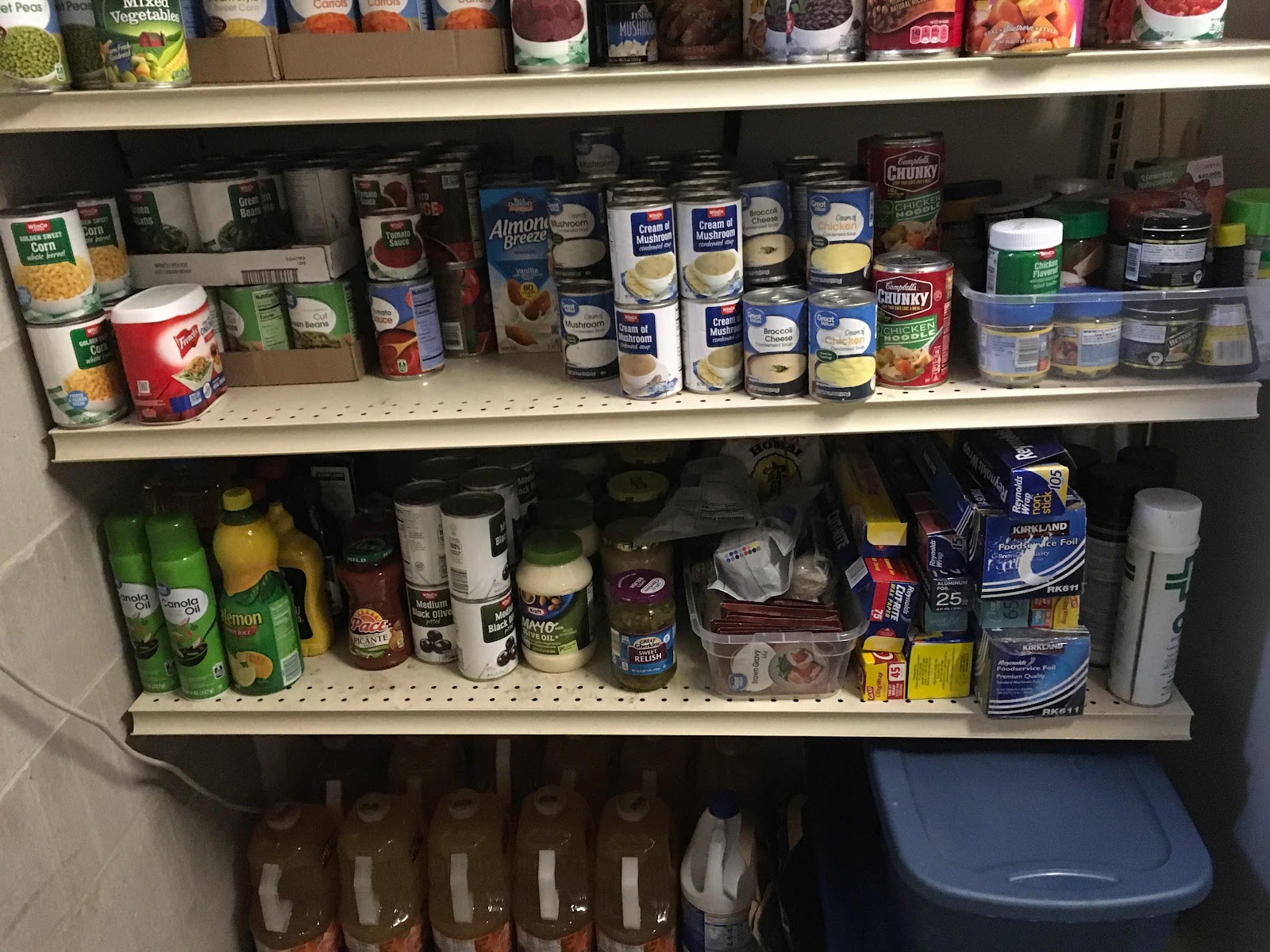 When I go to the store I just buy 4 to 6 extra cans or jars of whatever I’m getting. Now that we have pretty much everything we need, I’ll just replace what we use. The hardest thing is replacing it from the back without messing everything else up! I would love to have some of those racks that you can put cans on and they just roll forward but those are ridiculously high priced and we don’t need that much food. 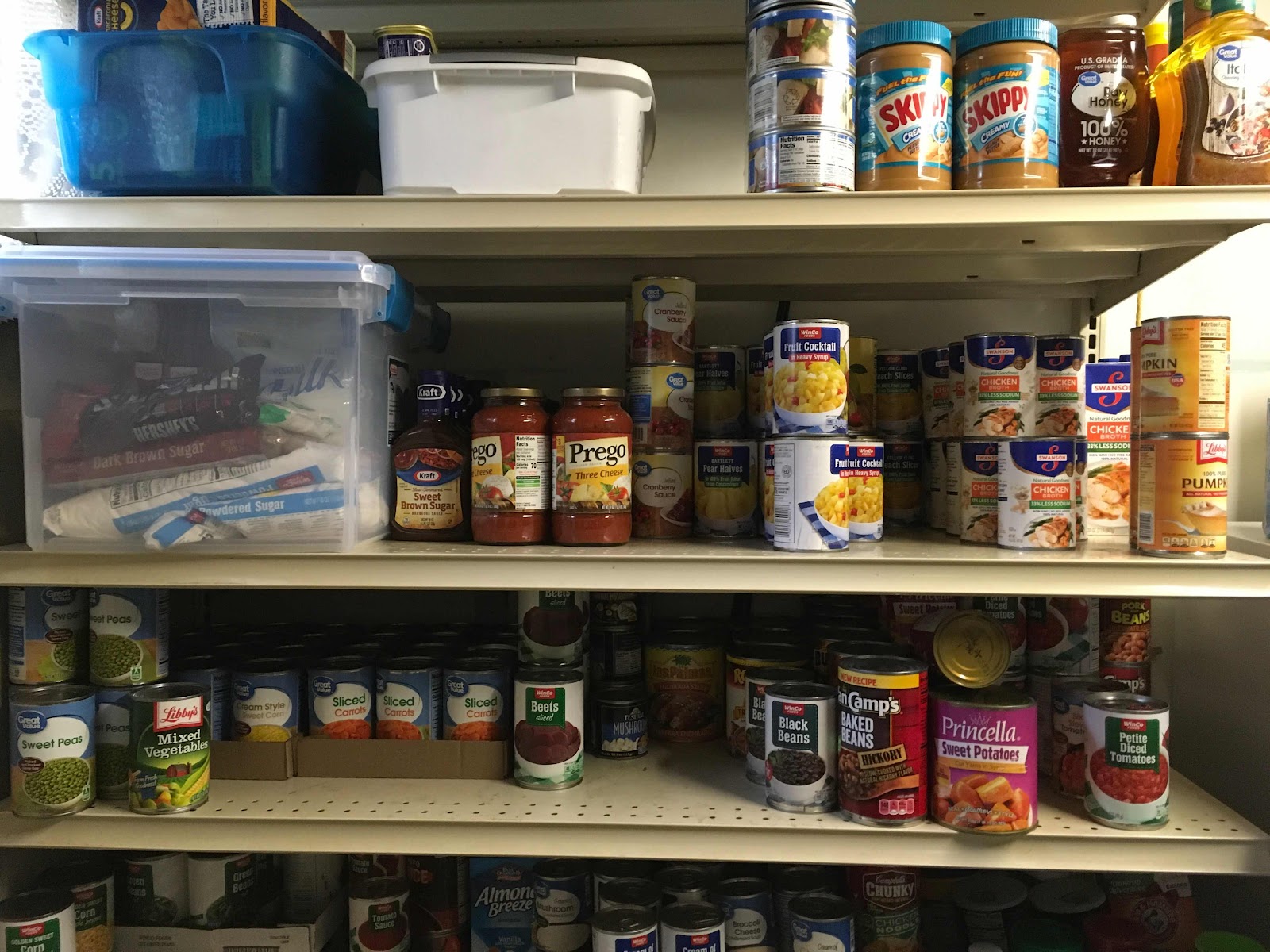 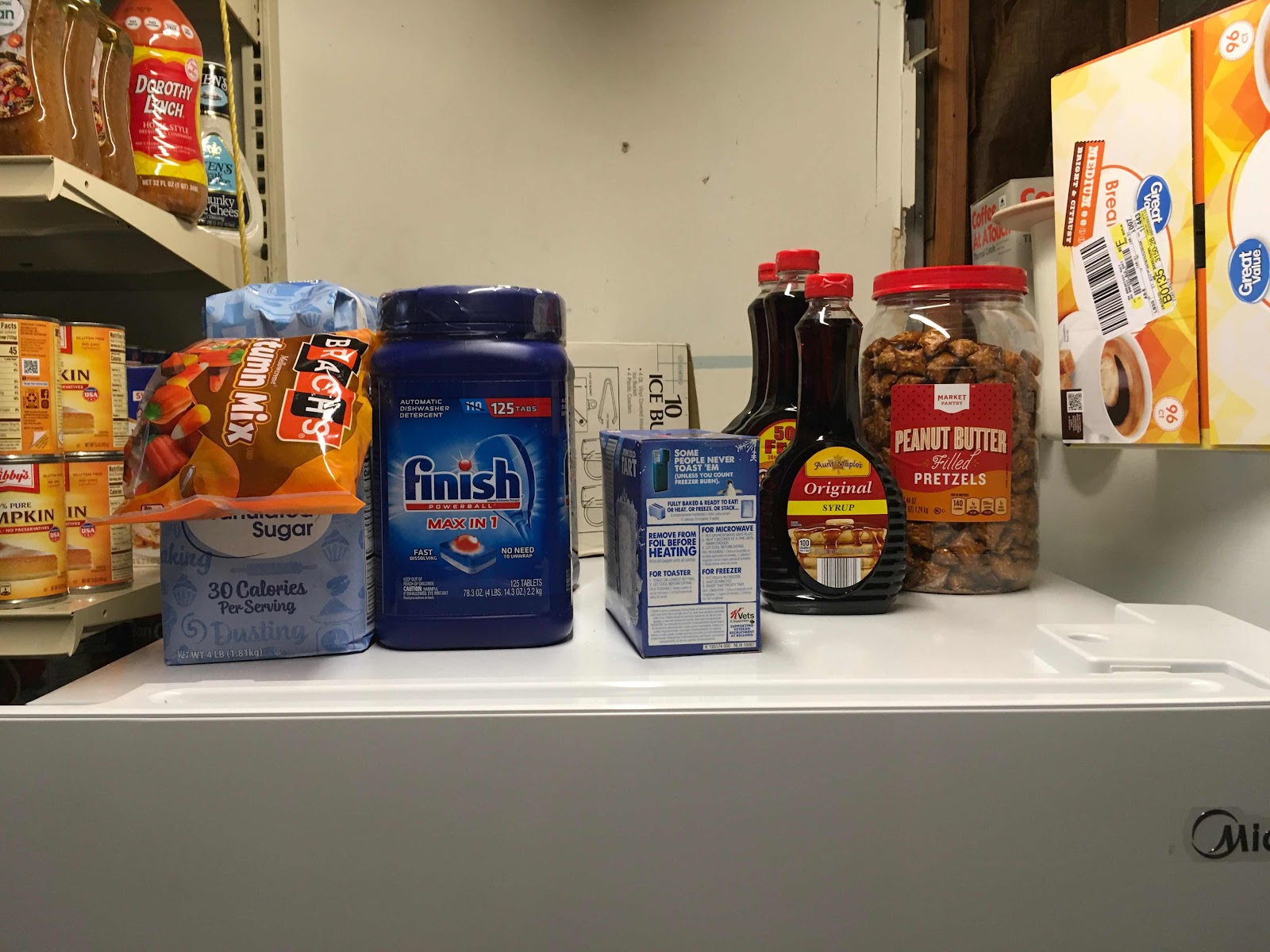 We finally found a new freezer. They are hard to find these days. The one that came with the house didn’t work when we plugged it in and was pretty old. I listed it on Facebook marketplace for free and someone came and picked it up within 20 minutes! The refrigerator was left at the house too and works great. I’m just used to having a freezer so I can take advantage of sales. Of course there aren’t many of those anymore are there? I’m hoping turkeys are on sale before Thanksgiving. I think we will probably have around 20 people here for dinner. 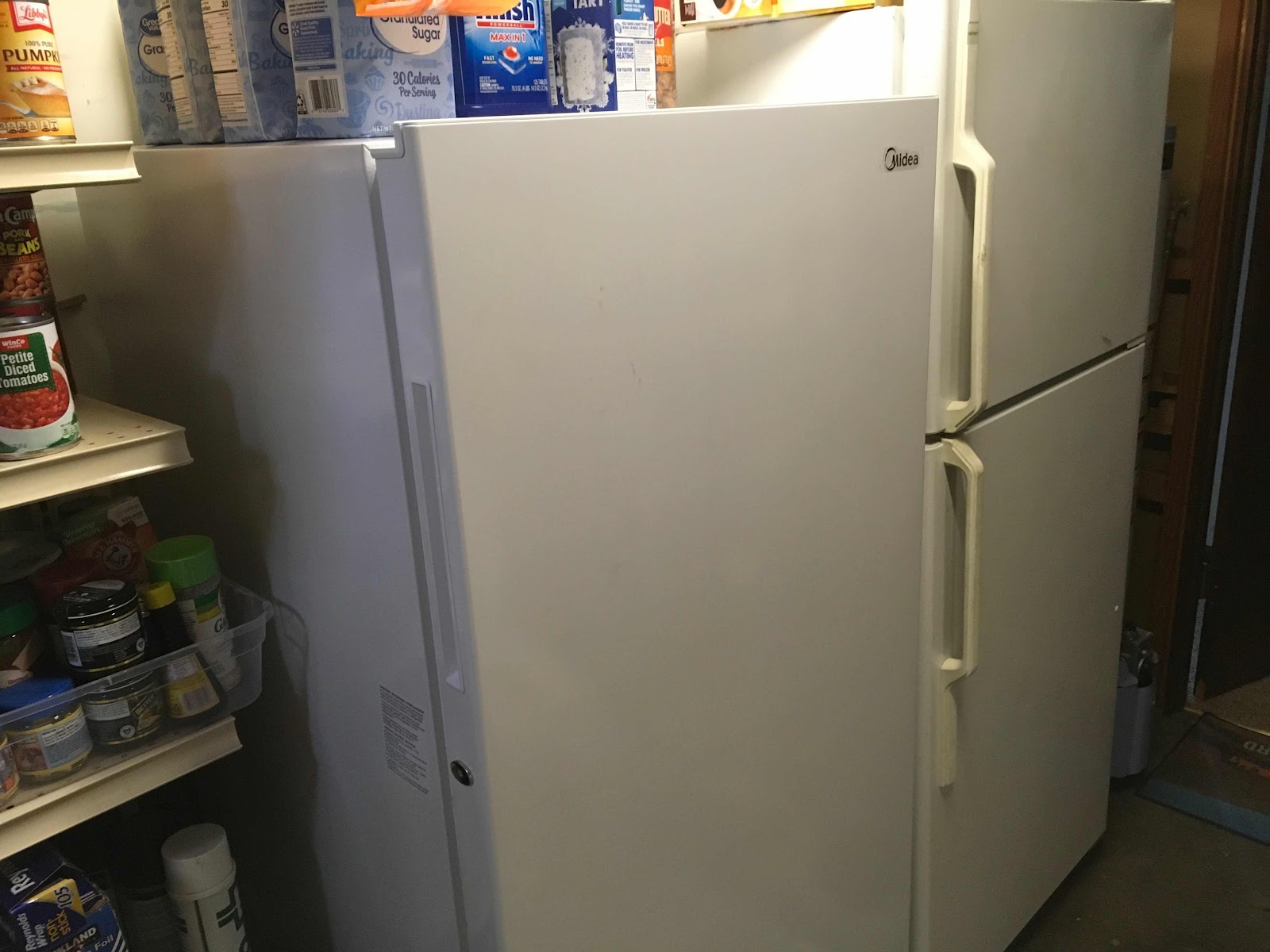 I think that in the post where I talked about volunteering for the medical center, I wasn’t very clear. For the time being, I will just be knitting and crocheting for them. It’s very limited with the volunteers that can be around patients right now. My sister is a baby rocker in the NICU,  but she hasn’t even been allowed to be at the hospital for almost 2 years now. There is a waiting list for that volunteer position, although I would love to do it too. I’ll probably do something else when they allow volunteers back in.
It’s been a relatively quiet week. Dennis and I had our annual physicals Tuesday morning and they gave us the Covid boosters while we were there. As usual, Dennis had absolutely no reaction to it which is wonderful. But I had the same reaction I did to the original two shots. Yesterday I felt pretty icky with bodyaches, low-grade fever and headache. Today my arm just hurts. It’s good to have it over with. Now we just have the last shingles shot at the end of November.
I hope you are all doing well. Take care of yourselves and make sure you keep some food in the house. Those supply chains, at least here in the states, seem to have broken badly. 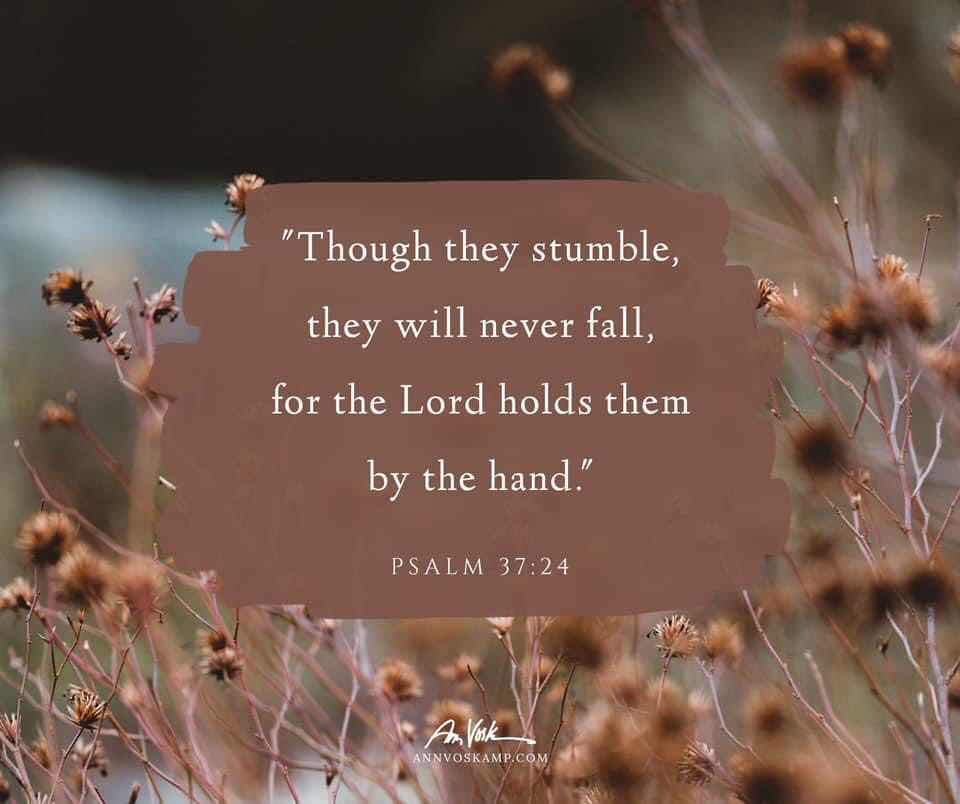