We are having a string of some beautiful fall weather. It is supposed to rain tonight and tomorrow, but we really need it, so no complaints here. Then, more beautiful crisp days are predicted. Spring and fall are my favorite times of year.
I brought out my half finished sock yesterday and started on the foot. It looks gray in this photo, but the color is really a dark green it’s called Lost Lake Heather. I never did find the four pair of hand knit socks that were lost in the move. They were supposed to be Christmas gifts and it’s very frustrating for me. 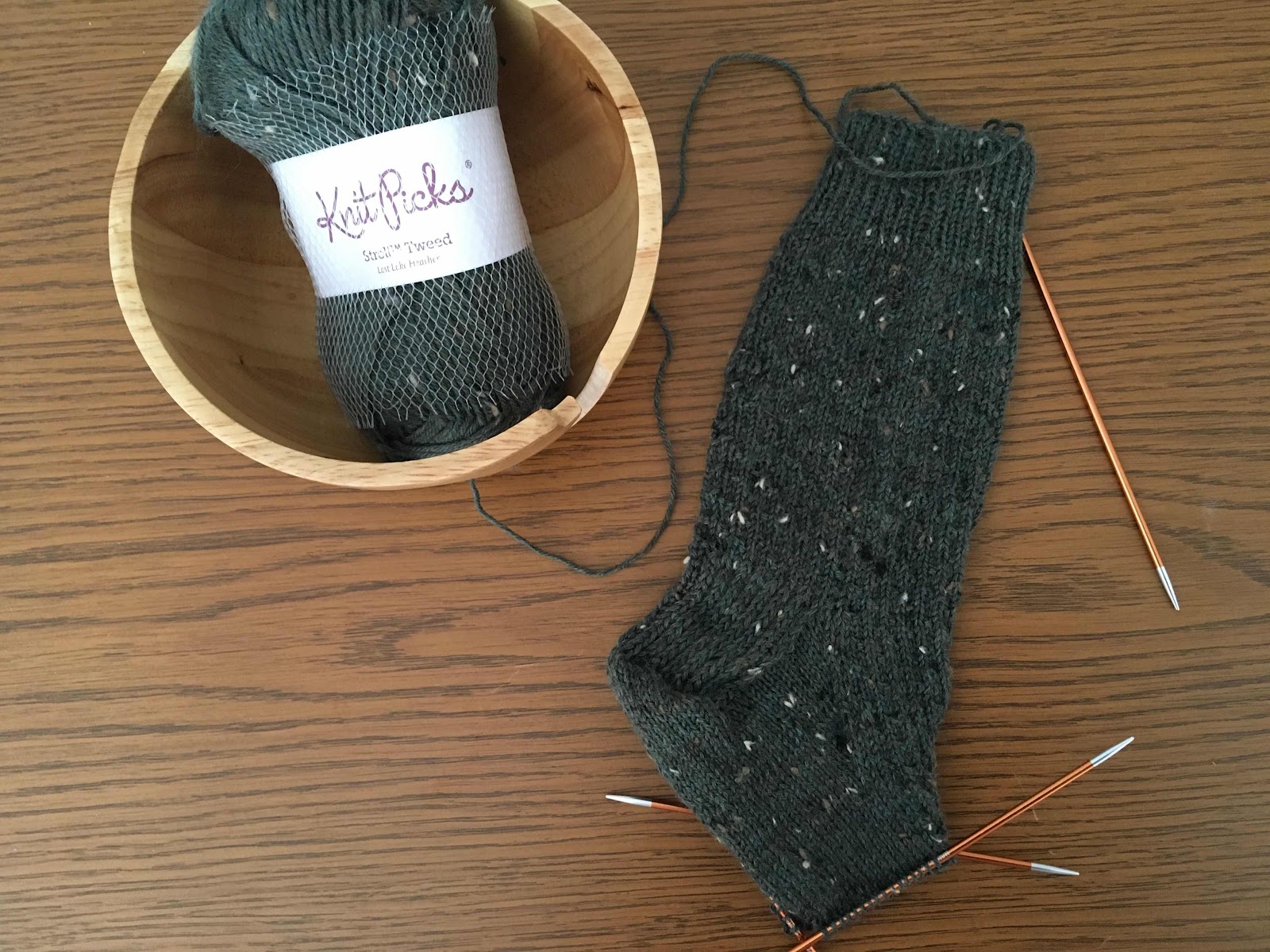 Last night while we started watching the first season of “The Chosen,” (I know, I know, we are way behind the times,) I started a shawl. It’s really a baby blanket pattern that I got from Mandy, but I just made it narrower at about 24 inches wide. I got the yarn for one dollar a cake at Michael’s in a clearance bin. The label was gone and both of the cakes I found were half pulled out of the cake. For one dollar that isn’t a problem. I’m just hoping there’s enough yarn to make a 4 1/2 to 5 foot long shawl.
Last Friday my sister went with me to pick up my ID from the University of Nebraska Medical Center where she volunteers rocking babies in the NICU. I’m officially a volunteer there now too. With my ID I’m actually allowed in the hospital during these strange times. I was told that Prayer Shawls are needed more than baby hats right now because so many more people are making the hats, although of course they will accept any that I bring in. With winter coming, it will be nice to give out warm shawls to people having chemotherapy, etc. 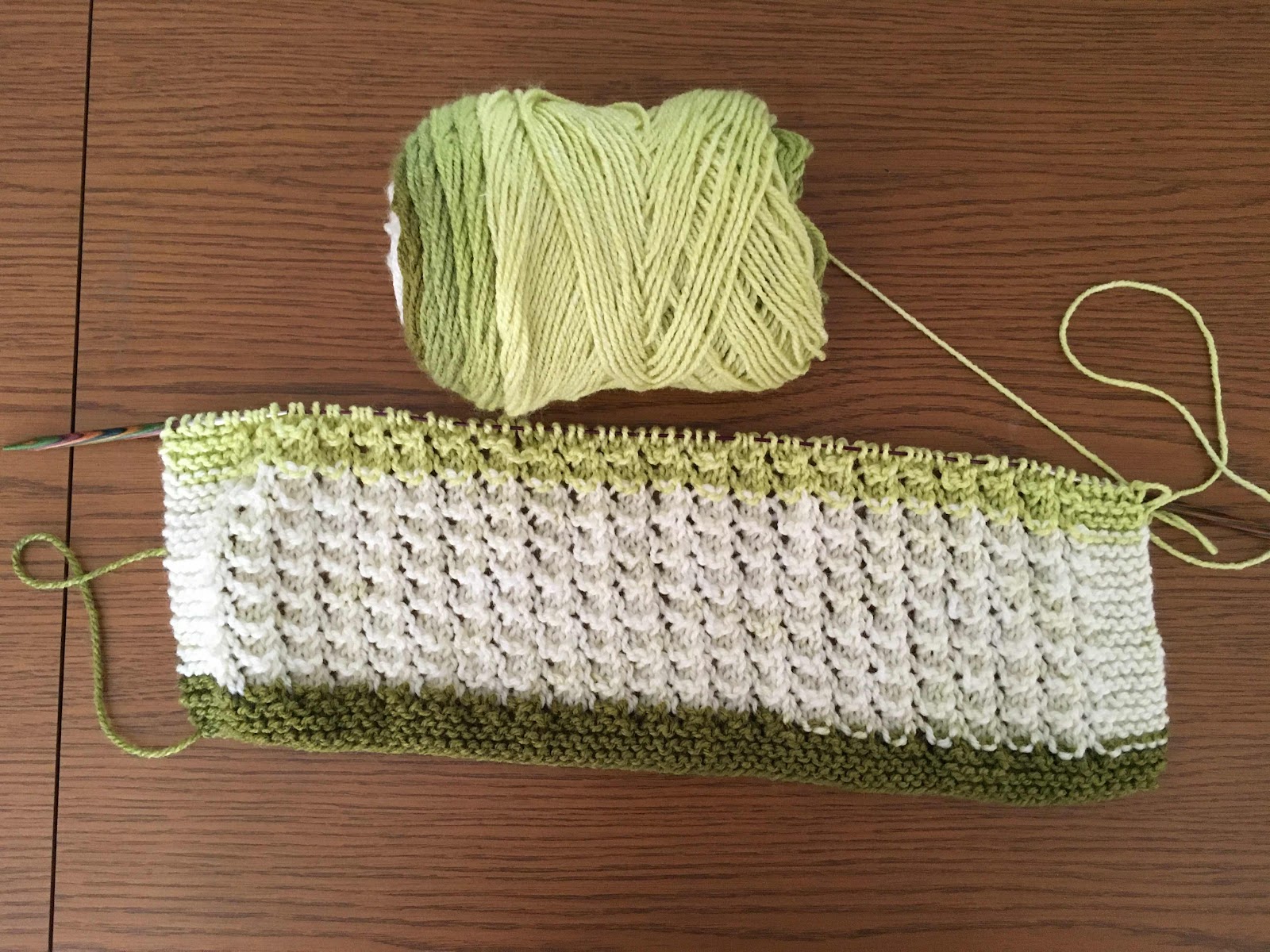 I also finished all of the Christmas ornaments for family. These two are for Caleb and Kyleigh and since I don’t think they ever look at my blog I thought I would show them to you. It only took me multiple attempts to sew these together. Three of them were sewn with the hangers inside! Now, I can see doing that the first time, but three? At least I have one gift done for each of them. At the rate I’m going this year it may be all they get! 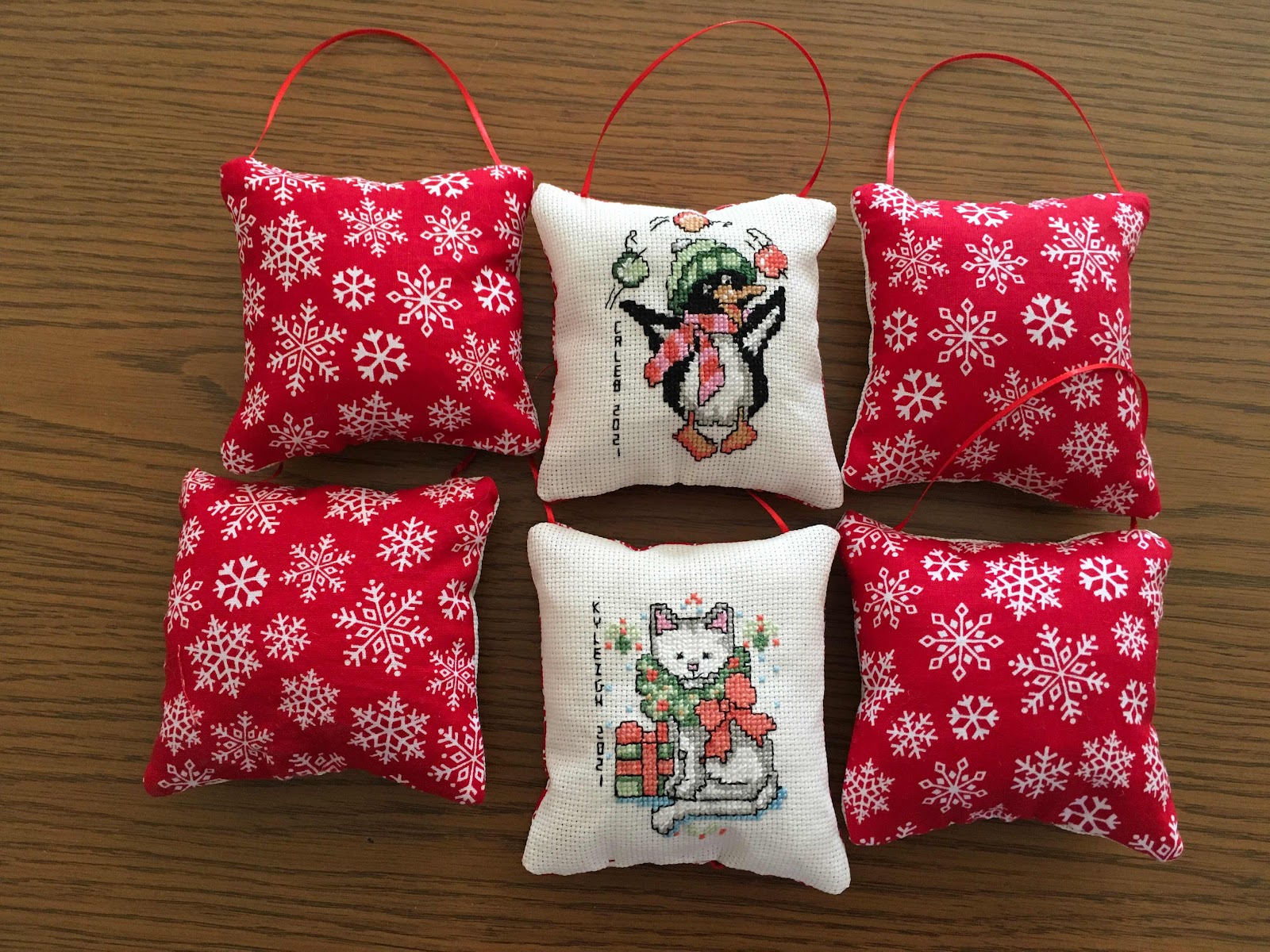 I have 124 pairs of mittens in this bag ready to go to the elementary school here in Omaha. Zoey helped me count them and pack them all up in the bag. She is a big help as you can imagine.
I just sent Mandy a text telling her that we went for a walk a little while ago. It took a little over a half an hour just to walk around the block! It’s like walking a two year old. 🤣 Every new sight, sound or smell, it’s like, SQUIRREL!!! Then we come around the top of the hill and she sees Grandma’s house and it’s a dead run for the front door. She loves her Grandma and I think the feeling is mutual.
She has progressed to sleeping with us most of the night now. We had said we weren’t going to do that. Ha! She’s cold. What can I say? She is the sweetest little snuggler. She gets right underneath either my chin or Dennis’s chin and snuggles in and doesn’t move for hours. How could you possibly resist that? She always starts out in her kennel and then after her 2:00 am puppy potty break Dennis takes pity on her and puts her in bed with us. 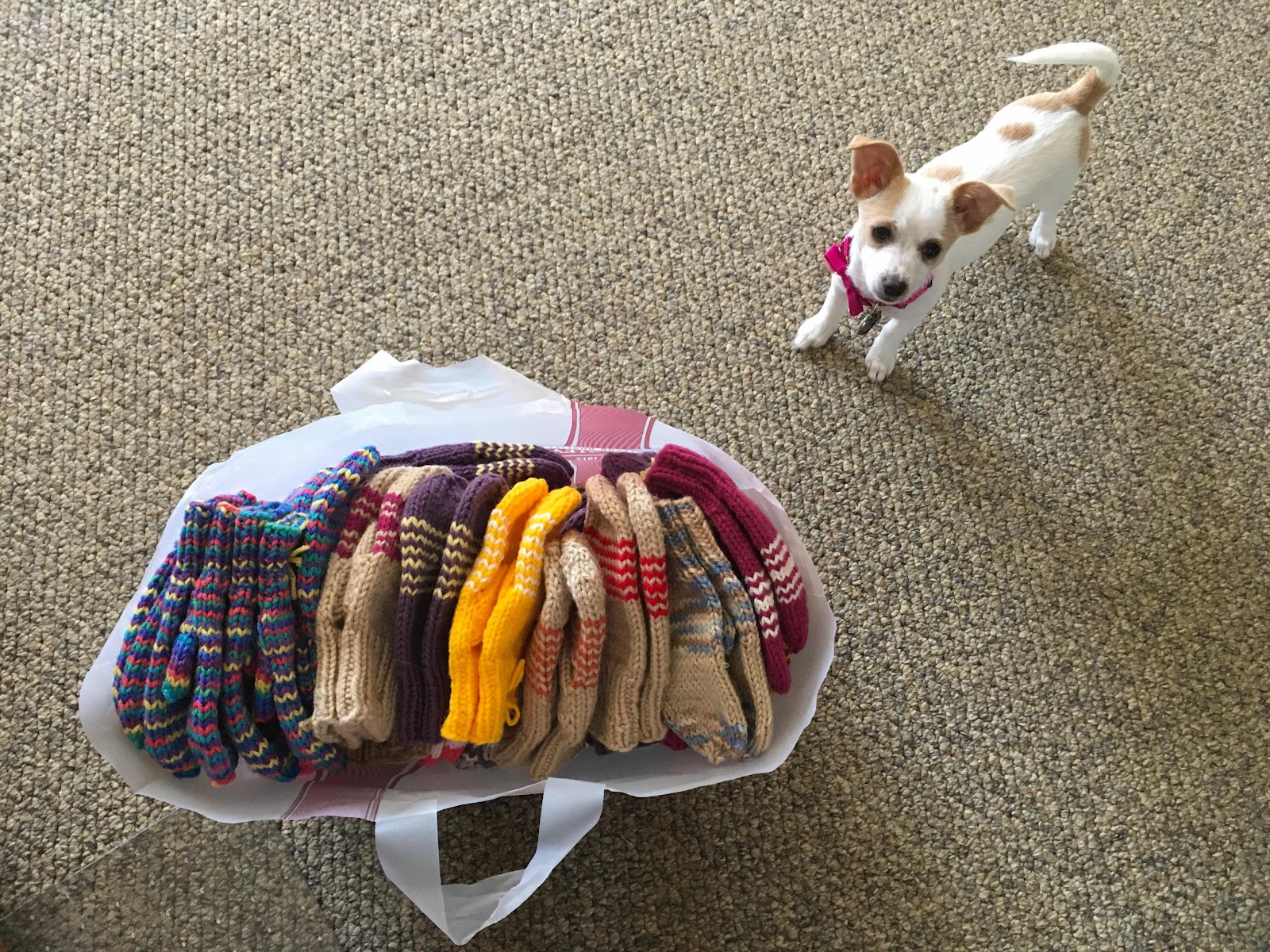 I posted this on Facebook the other day. If the woman happens to be me it’s doubly true! 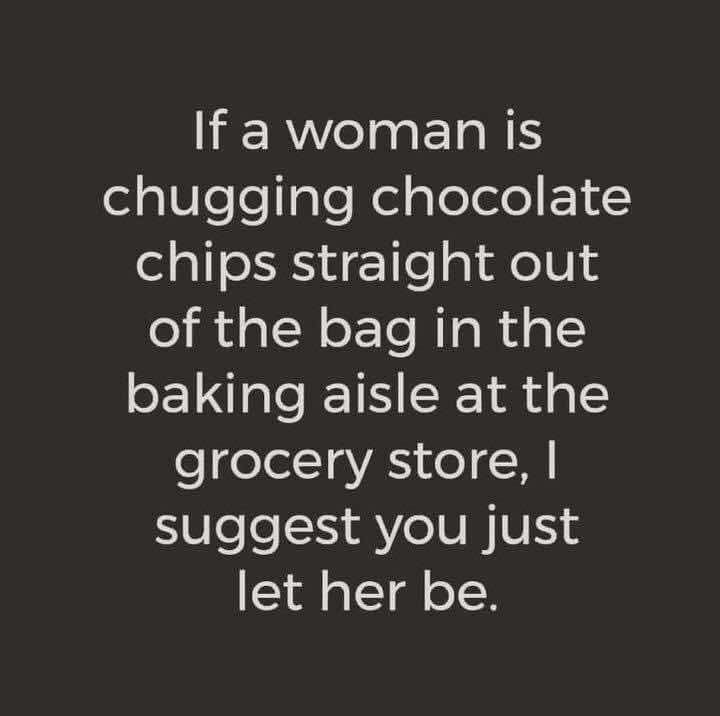 I had a dermatologist appointment this morning at 8:00. I think because I was a new patient, everyone else was taken in first. It was almost 9 before I was taken to an exam room, but I really did like the doctor when I met him. He’s very young and friendly and it’s the same doctor my sister goes to. Since skin cancer runs in our family it was one of the first things I wanted to make sure I had a doctor for. And big surprise, he took off a spot while I was there this morning. My grandmother had psoriasis all over her body and all of my siblings have it. I’ve been very lucky, living out in Washington it hasn’t bothered me at all. Coming back here I’m starting to get some spots of it though. Oh the joys of getting old!
Take care everyone. I plan to do some knitting this afternoon and then I have to try to think of something good for dinner. It’s always a challenge trying to think of something different isn’t it? stay safe and well. 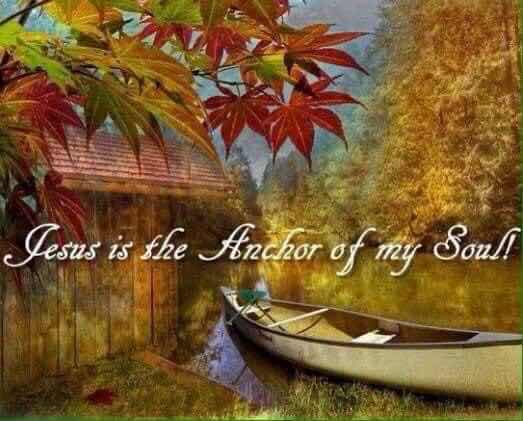