Happy Tuesday everyone! It’s snowing here again today. Yesterday we had a surprise 3 inches when I woke up. And it was snowing again when I woke up this morning. However, it’s supposed to turn to rain this afternoon and that makes me happy. I have to drive to Idaho this afternoon for a meeting and I don’t look forward to doing that if the roads are bad.
I had a big finish yesterday evening. Are you ready for the ta-dah moment?  Here is my handsome Hubby modeling his new sweater for you. Please excuse his pajama pants as it was quite late when I finished the last seam. Also, it had not been blocked yet as I did that this morning. 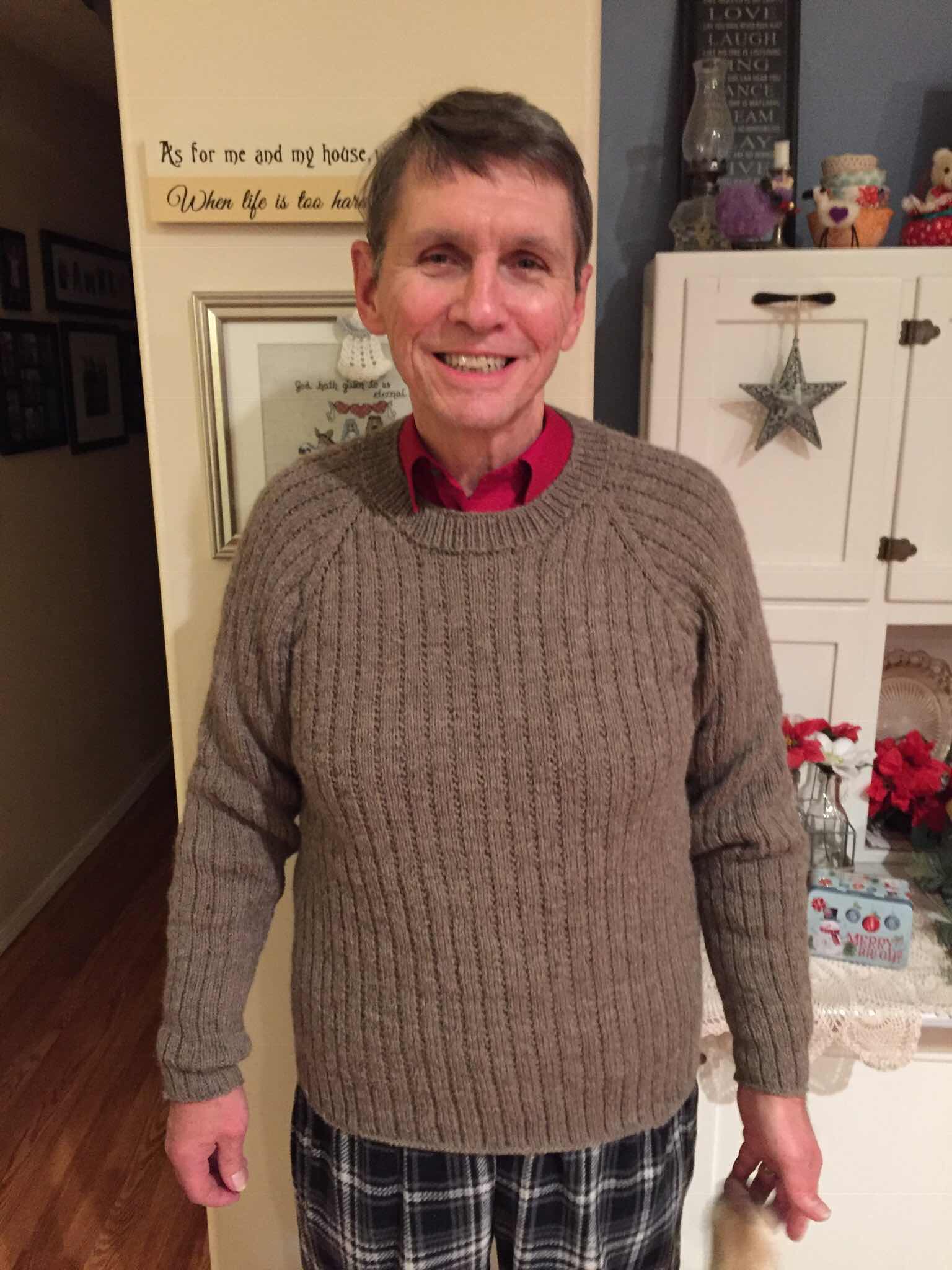 And here it is this morning after washing and laying it out to block.  The shadows are terrible on this one because it’s so cloudy outside. But you get the idea. The color is much more true in the picture with Dennis wearing it. 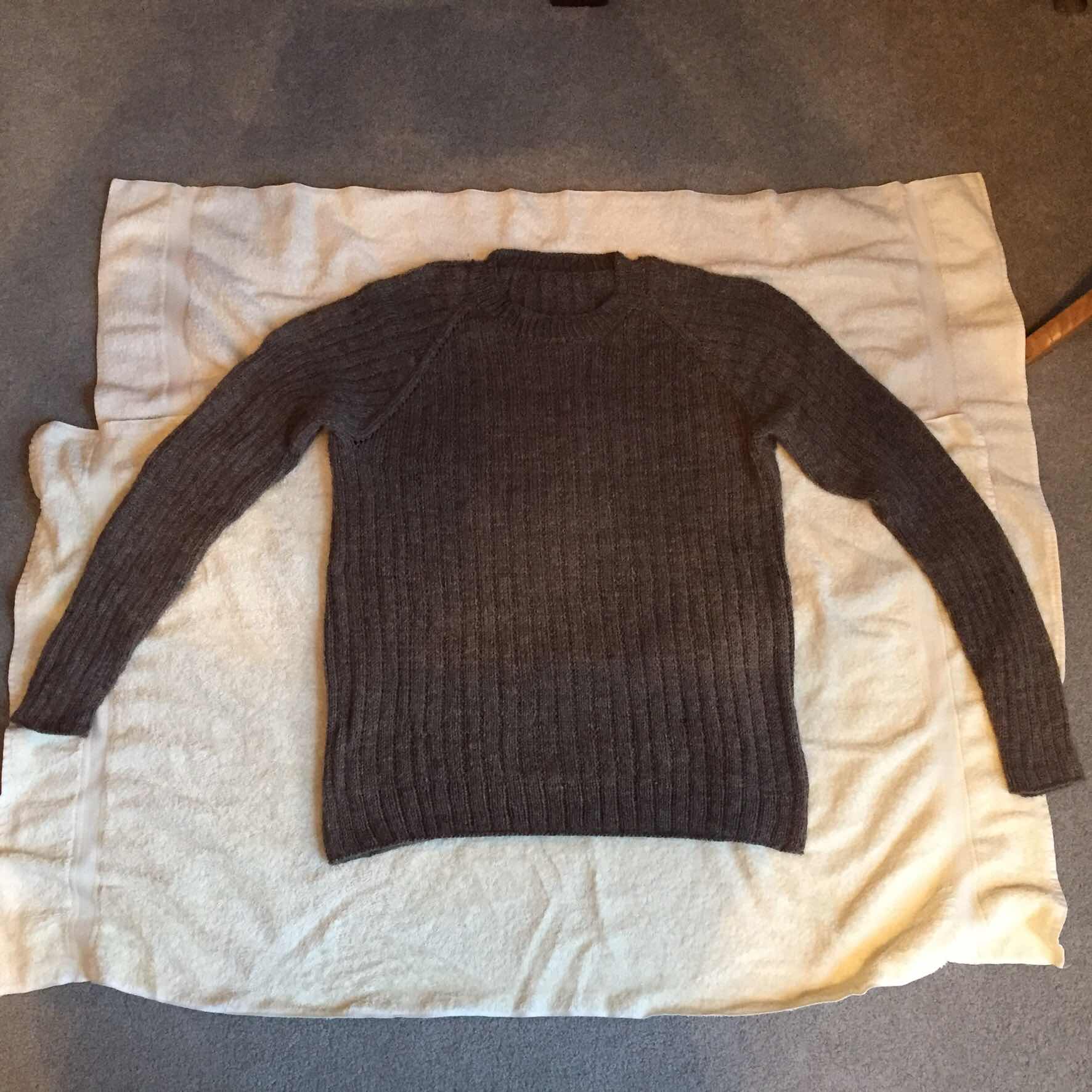 He seems to be very pleased with it. I’ve made him several other sweaters, but he’s lost weight and they’re much too big for him. This is the first one that I’ve made out of 100% wool so it was a much bigger investment than the others. I told him he can’t gain his weight back! Ha! We talked to Alex last night and he was quite disappointed that it fit his dad. He has requested one a size smaller. What do you think?
The final block in the “12 blocks of Christmas KAL” wasn’t uploaded until mid afternoon yesterday. Since I wanted to finish Dennis’s sweater, I didn’t get started on it until around 9:00 last night. Obviously I didn’t get it completed. I should finish it today and then I will seam all three strips together and crochet a border around it.  This square is entitled “chevron‘s.” 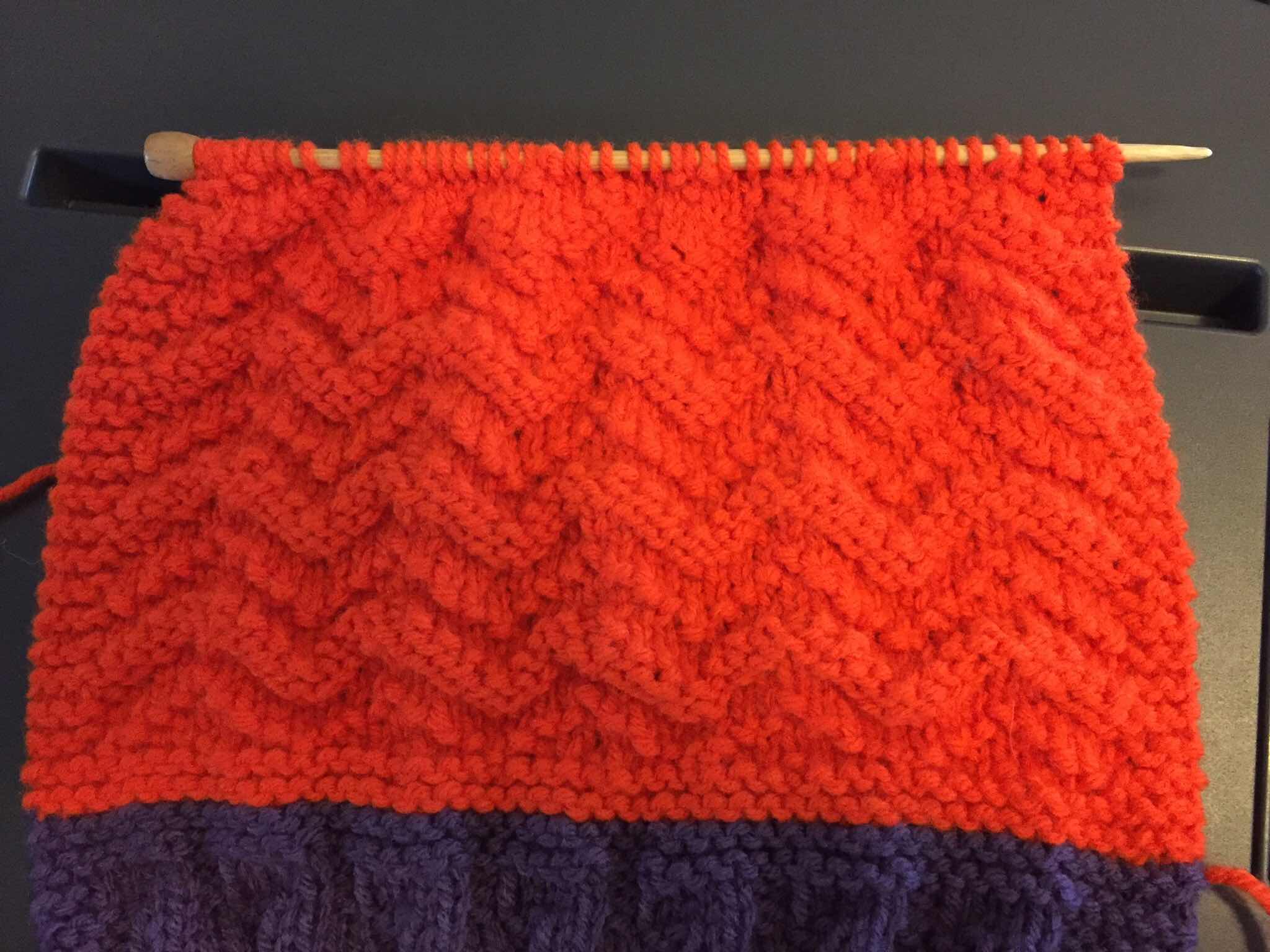 We put the tree up on Saturday.  Actually Dennis put it up and I decorated it.  No lifting for me!  I have to admit, it does make the house feel much more cheerful. The star on top was the one Dennis’s mom and dad got the year he was born. I love the fact that we have had it for our tree for years and years now. 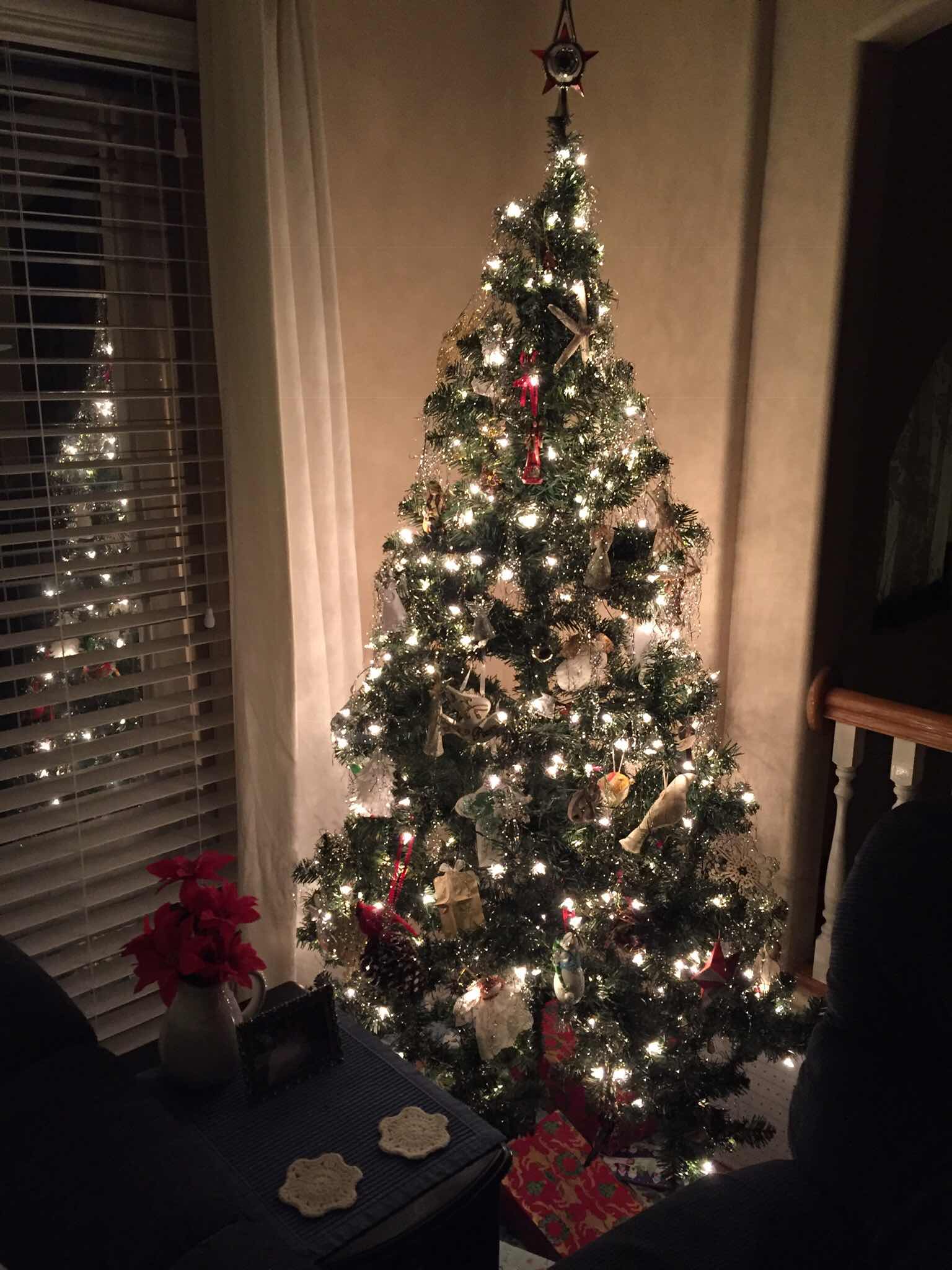 I thought you might enjoy this photo of one of my friends decorations in her yard.  They live on the Spokane River.  I thought it was really cute and imaginative. 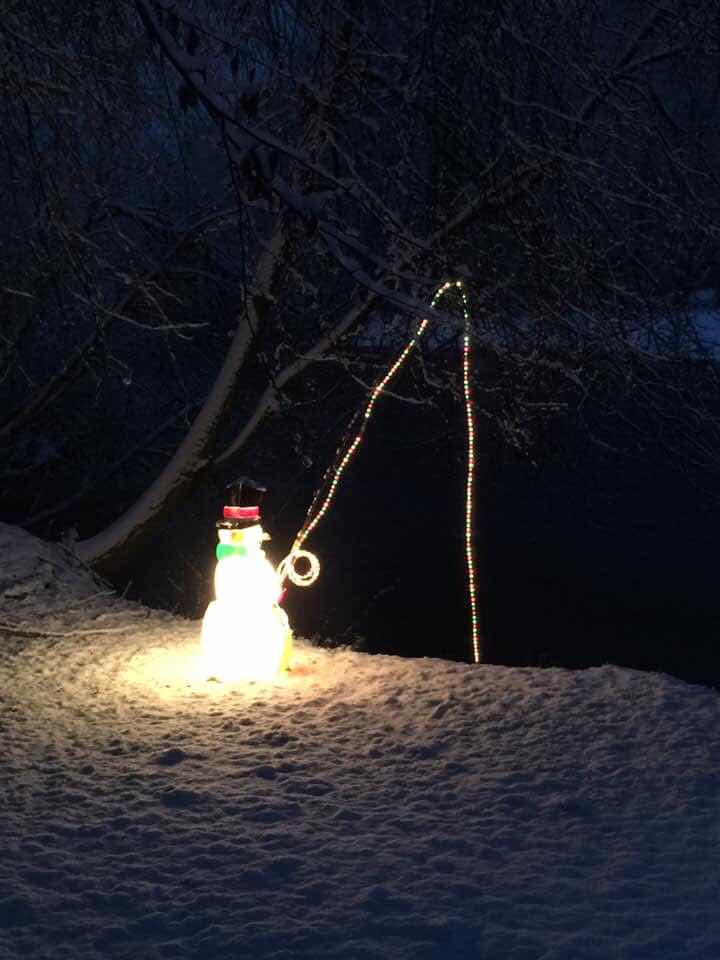 I had my annual cardiology appointment yesterday and figured it would just be a routine thing.  It wasn’t horrible but they weren’t happy with how low my BP was and that my pacemaker had picked up 28 significant events of tachycardia since my download last month.  He actually took one of my medications away hoping that will raise my blood pressure and moved some of my others around in the day. He was talking about doing an ablation in the next couple of weeks but I talked him into waiting a while to see if the medication changes help. I’m supposed to see him in four months and we’ll see what happens. It does explain why I have felt so tired lately. My blood pressure was 60/40 in one arm and 74/58 in the other arm.  I thought I was tired because I have been sitting around so much with my back issues. I felt like I was just being lazy. I guess there’s a reason for it after all! Fun times always.
And to add to my joys, I have to have a repeat colonoscopy next Monday. So I’m prepping all this week for it. The doctor is making me do an extended prep.  There is a medicine I take that they should have had me stop taking seven days before the colonoscopy last month, and even though I reminded them I was taking it, they told me not to worry about it. I stopped it myself two days before, but now the doctor is saying it should have been for an entire week. So I get the joy of having to do this again with even more prep. I won’t go into the details, but it doesn’t sound like it’s going to be a fun five days. As of yesterday my entire diet had to change too.
December has not been a cheerful holiday season for me yet. I’m sure hoping things start looking up after next Monday. I would appreciate any prayers you feel like sending up for me. :-)
“The Lord is good, a refuge in times of trouble. He cares for those who trust in Him.” Nahum 1:7
Blessings,
Betsy
Posted by Betsy at 10:42:00 AM