Good morning everyone! I’ve been busy the last few days running errands. I have volunteered to teach the first through third grade Sunday school class beginning in January, so I spent a couple of hours at the Christian bookstore yesterday looking over curriculum. Then I went to Michael’s and realized all of their yarn was half-price, yesterday only. Of course I had to buy a few skeins. This morning I went to the Dollar store to stock up on a bunch of school supplies. Pencils, glue sticks, crayons, construction paper, scissors, etc. It’s amazing how much you need to teach little kids!  The church would provide some of it, but it’s easier to just take my own back-and-forth and then I know what is in my classroom each week.
The Dollar Store was jampacked with people and then of course, it’s next-door to Michael’s so I had to stop in there. Because I can never pass up Michael’s. Ha! Today they have all of their fancy boxes on sale 70% off. So I picked up one or two of those. And then, Hobby Lobby is just next-door to Michael’s, so I went over there and bought some scrubby yarn so I can make some dish scrubby‘s for small gifts.  I keep a basket of dishcloths by my front door for anybody who stops in at the holidays to choose from. I would like to throw a few scrubby’s in there too.  Using my 40% off coupon it was only a little over two dollars for a skein of the scrubby cotton.  Then it was on to the grocery store to pick up a few things for tomorrow and Sunday evening. Whew!  I’m finally home!
Tomorrow night, instead of having regular Bible study, we’re all getting together to watch the new Netflix movie “The Christmas Chronicles.”  Dennis and I have already watched it and it was pretty cute. So we’re going to have finger foods tomorrow night and watch the movie together. Sunday night is the men’s tool exchange and women’s ornament/kitchen tool exchange at church. We’ve done this every year since we’ve been in Spokane, which is 25 years. It’s lots of fun and we have finger foods there too.
That was a lot of rambling wasn’t it?  On to more fun stuff.  I’ve started the first sleeve on Dennis’s sweater.  It looks more gray than brown here. The sun is shining brightly today so I don’t know why the colors are all wrong in the photos. 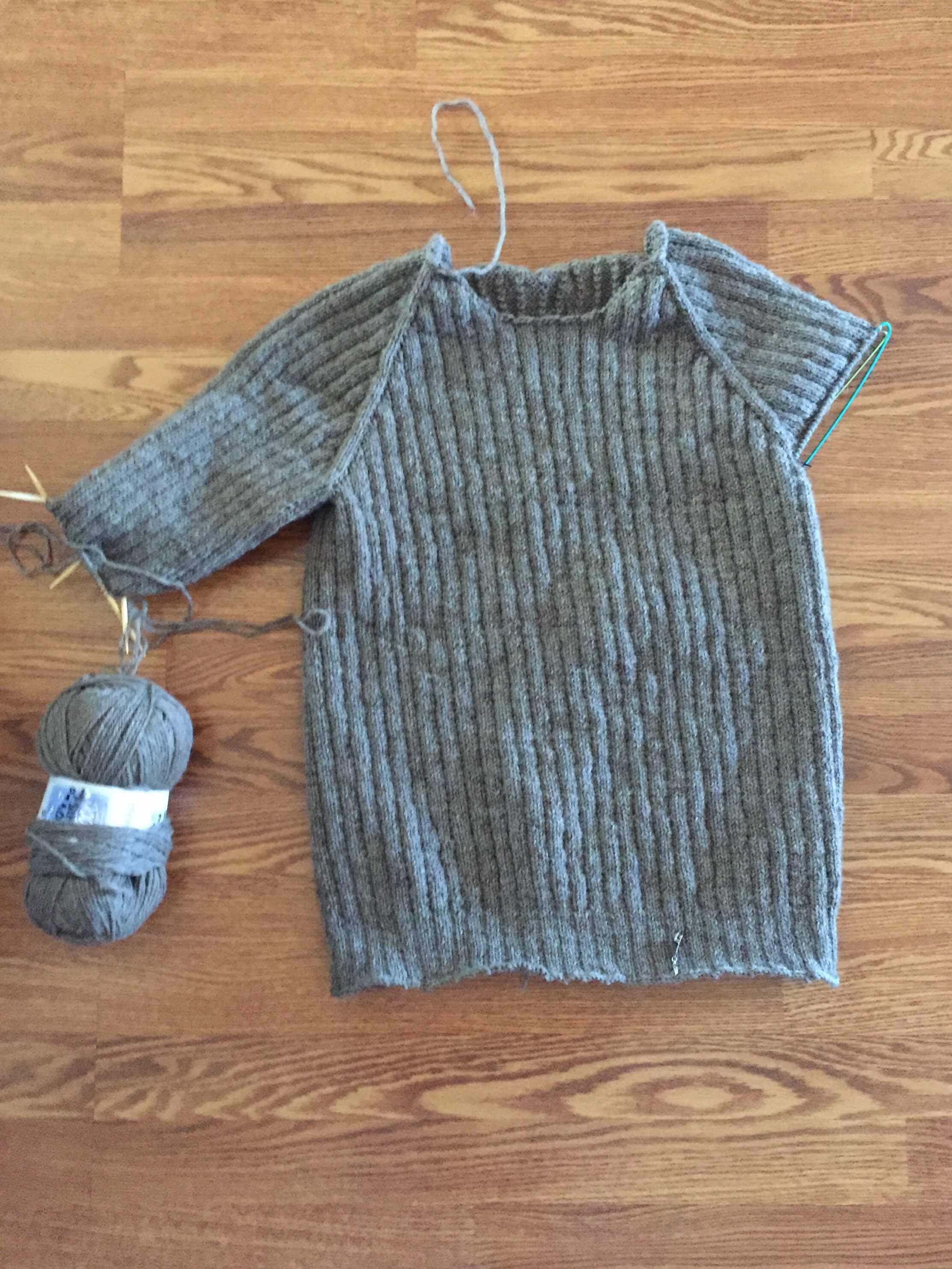 I finished the 10th square for the KAL yesterday.  Only two more squares to go!  I like this basket weave pattern. 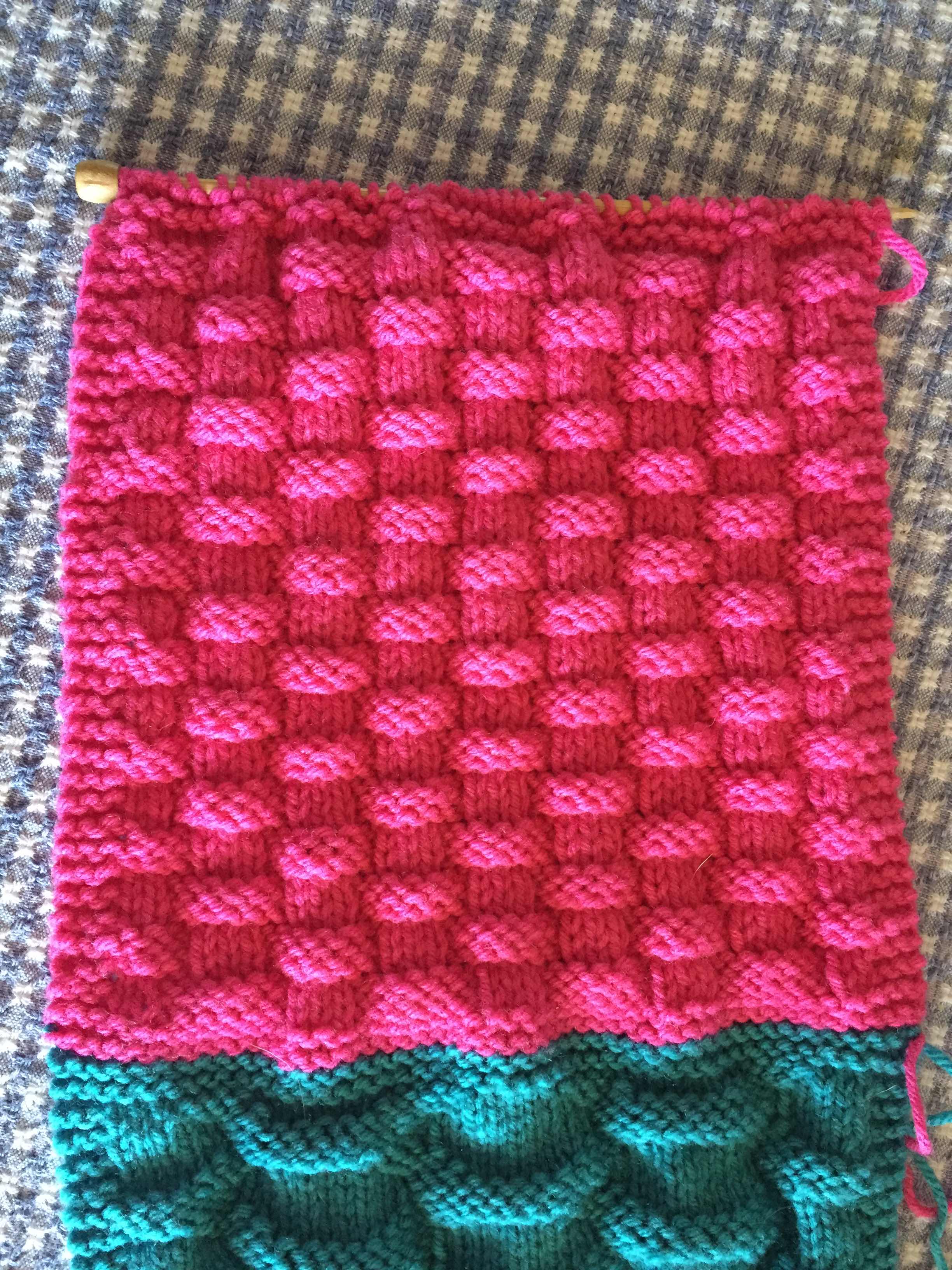 It was quite frosty outside both yesterday and today. I took this photo of a tree in the backyard to show you the  hoarfrost that covered absolutely everything including the sidewalks. 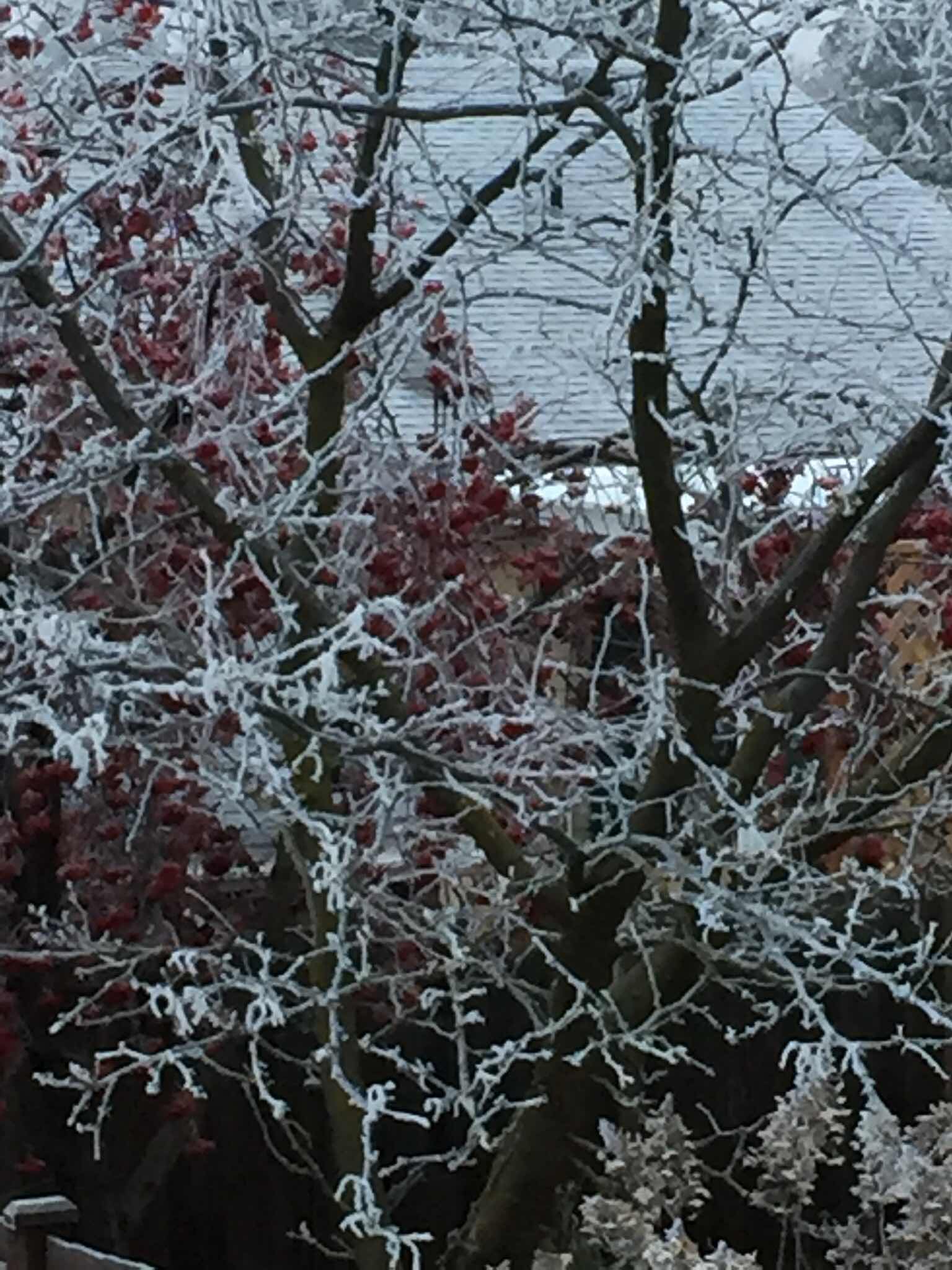 And I’ve left the best for last!  I had a wonderful package show up in the mail on Monday. It was a brown paper package tied up with string! It really was.  It came all the way from Lorraine and Gerard who live on the Isle of Lewis. Look at all of the goodies she sent me. 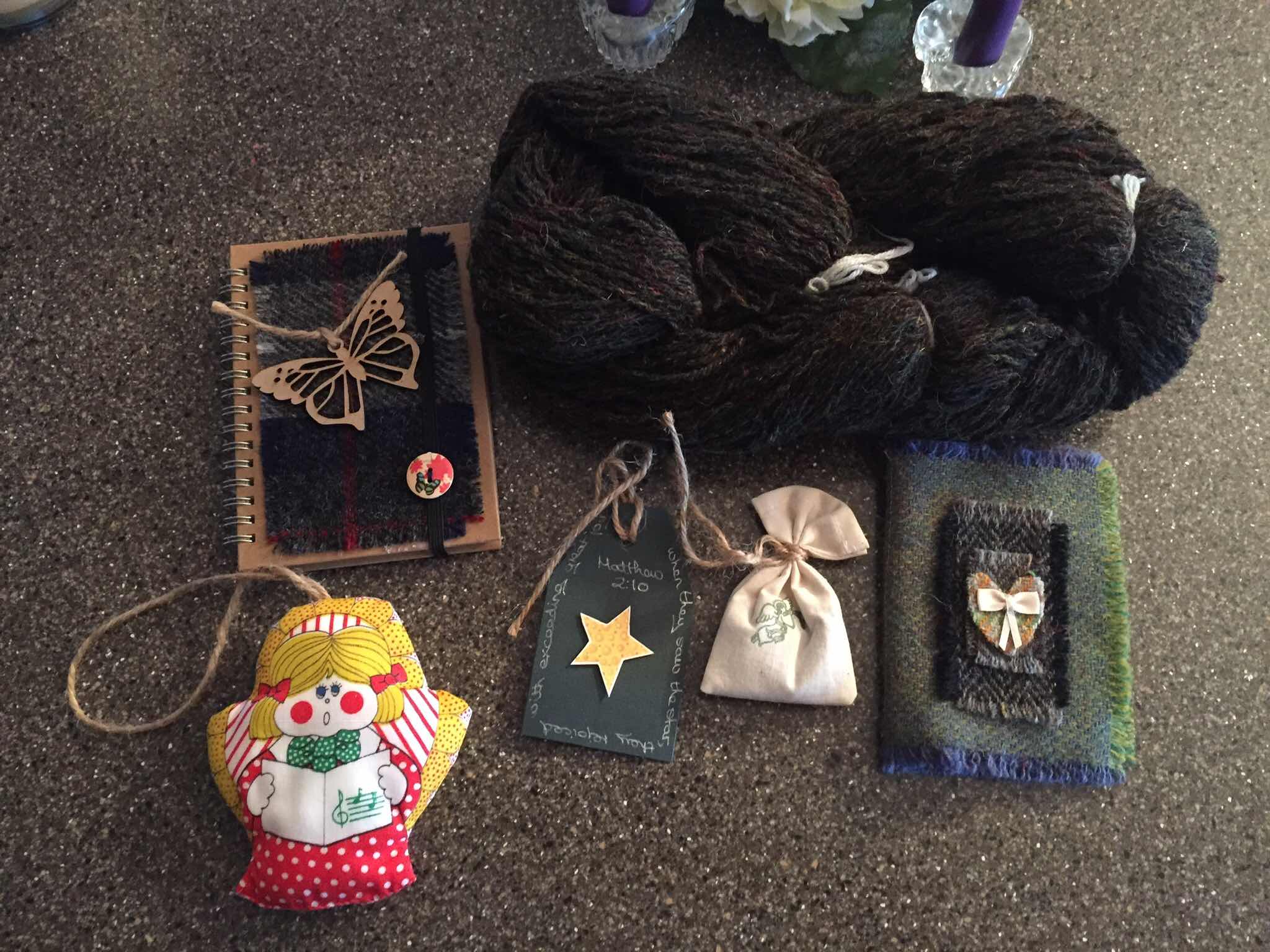 There is a gorgeous hank of brown yarn from one of the sheep right there on the Isle. The sweet notebook and the needle case are both made with Harris Tweed from the Isle.  The little gift tag is beautiful and has one of my favorite Bible verses on it. She also included a sweet singing angel ornament and a lavender sachet. Everything was made with Lorraine‘s own crafty hands.  Am I not the absolute luckiest woman ever? This was so unexpected. I need to think of something very special to use this yarn for. Thank you so very, very much Lorraine.
I’m almost ready to change my mind and put the Christmas tree up. I’m really missing it this year. For those of you who are interested, the test I had done last week came out negative for inflammation in my bones. Which is very good news, but obviously they still don’t know what’s causing my back to spasm so much. The neurologist called yesterday and said he wants to wait until I see the spine doctor again, which isn’t until January 2. I appreciate all of your wonderful thoughts and the prayers that you have said for me. I still would appreciate them.
After being out and about for a couple of hours this morning, I will be down for the rest of the afternoon because of my back.  It’s quite frustrating. But, I know I have it better than a lot of people so I really don’t mean to complain about it, I just thought I would give you all an update because several people have asked.
I hope you’re all having a wonderful Monday and enjoying lots of Christmas cookies!
“But when you give to the needy, do not let your left hand know what your right hand is doing, so that your giving may be in secret. Then your Father, who sees what is done in secret, will reward you.”  Matthew 6:3-4
Blessings, Betsy
Posted by Betsy at 12:20:00 PM