We are getting settled into our new home. It was so, so, so hot Monday and Tuesday. They were the hottest days of the year so far and those were the days that we moved. Go figure! But we survived and we are pretty much settled in. Dennis still has to do the semi-permanent sewer hook up when he returns from Nebraska, but we just ran out of time. He was off of work Monday and Tuesday and then went back Wednesday and Thursday. He was swamped and worked 14 hours each day. Then he got up at 5:00 this morning and left for the drive to Nebraska. He just called me and he’s going through Billings, Montana right now. He’s planning to sleep in the backseat of the truck tonight at a truck stop somewhere in South Dakota. If you would say a prayer for his safety I would greatly appreciate it.
I will share some pictures of the outside of our new spot with you. It’s not the view at the lake, but we have made it very comfortable and we met some very nice people already.  Neal and Jenny brought Panda Express for us for dinner last night.  It was almost like old times except we have to keep our distance.  have I said recently how sick and tired I am of COVID-19?
We brought our steps from the lake so Chloe could get in and out of the trailer easily. When it starts snowing they will be a lot easier than the metal trailer steps.  Dennis put the extended doorhandle on our trailer and Larry and Nita‘s trailer a few years ago. It makes a world of difference and makes getting in and out of the trailer much easier. 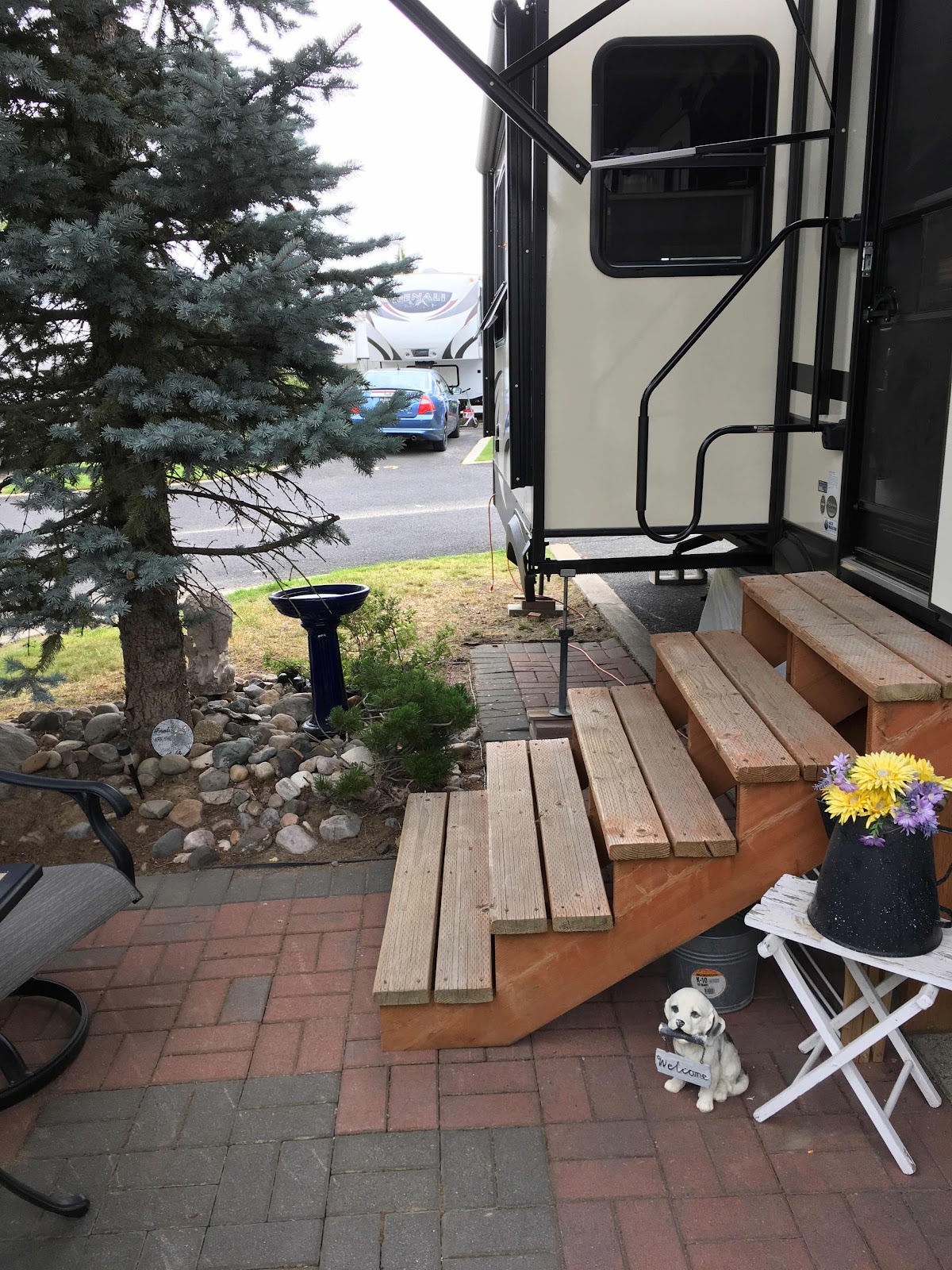 This was the bistro table we had on our back deck. We’ve had dinner out here twice since we moved in and really enjoy it. At the end of the day it’s very shady over here, even though it’s on the west side. The trailer next-door and the trees above give us plenty of shade. 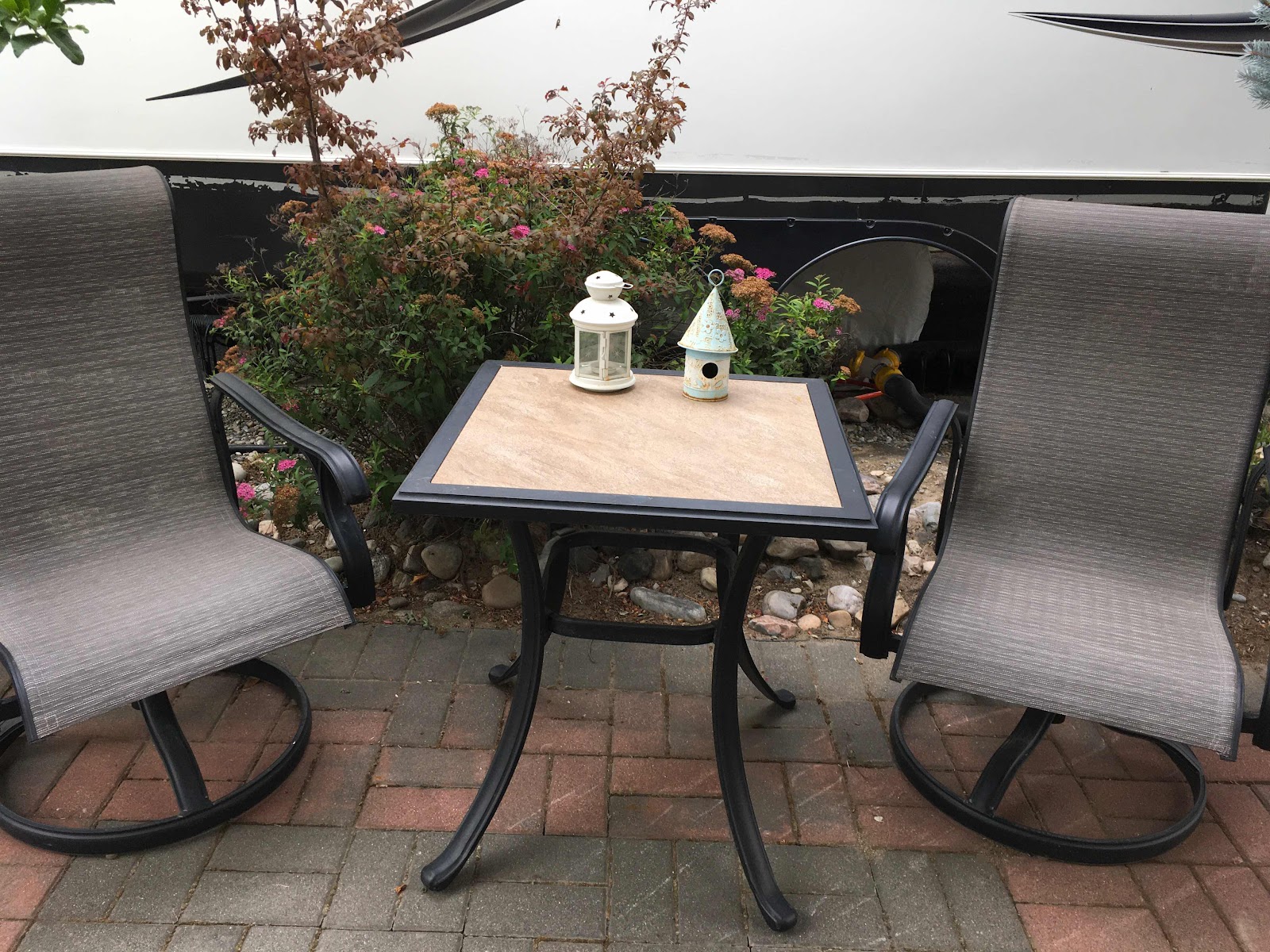 We had the reclining chairs and table underneath the deck at the house. 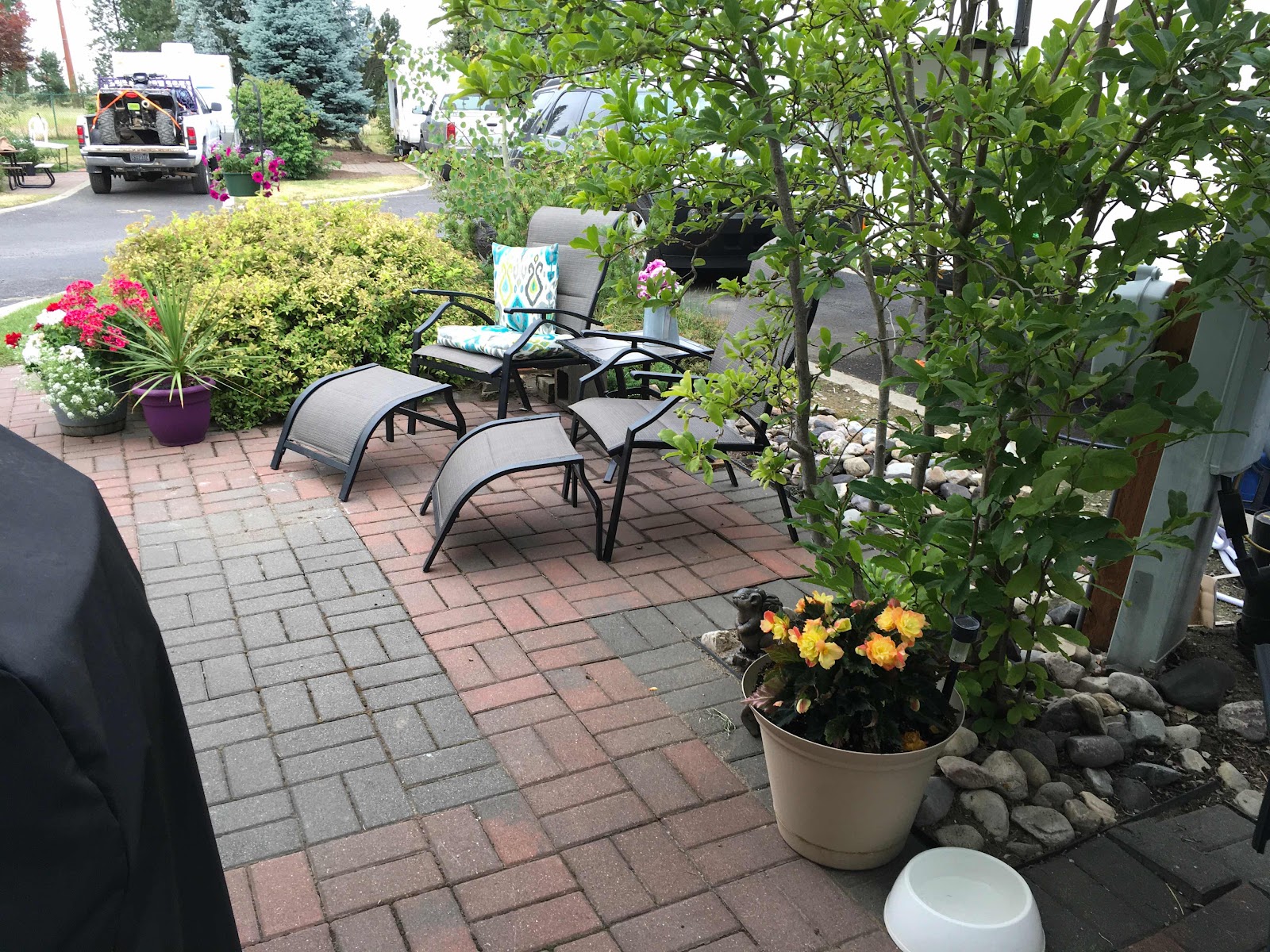 You can see the little slide in the background. There’s a young couple with two little children that have been here for two months. They’re leaving at the end of August to head over to Coeur d’Alene, Idaho for two months. He works full-time while they travel around the United States. He does something with computers from their trailer. 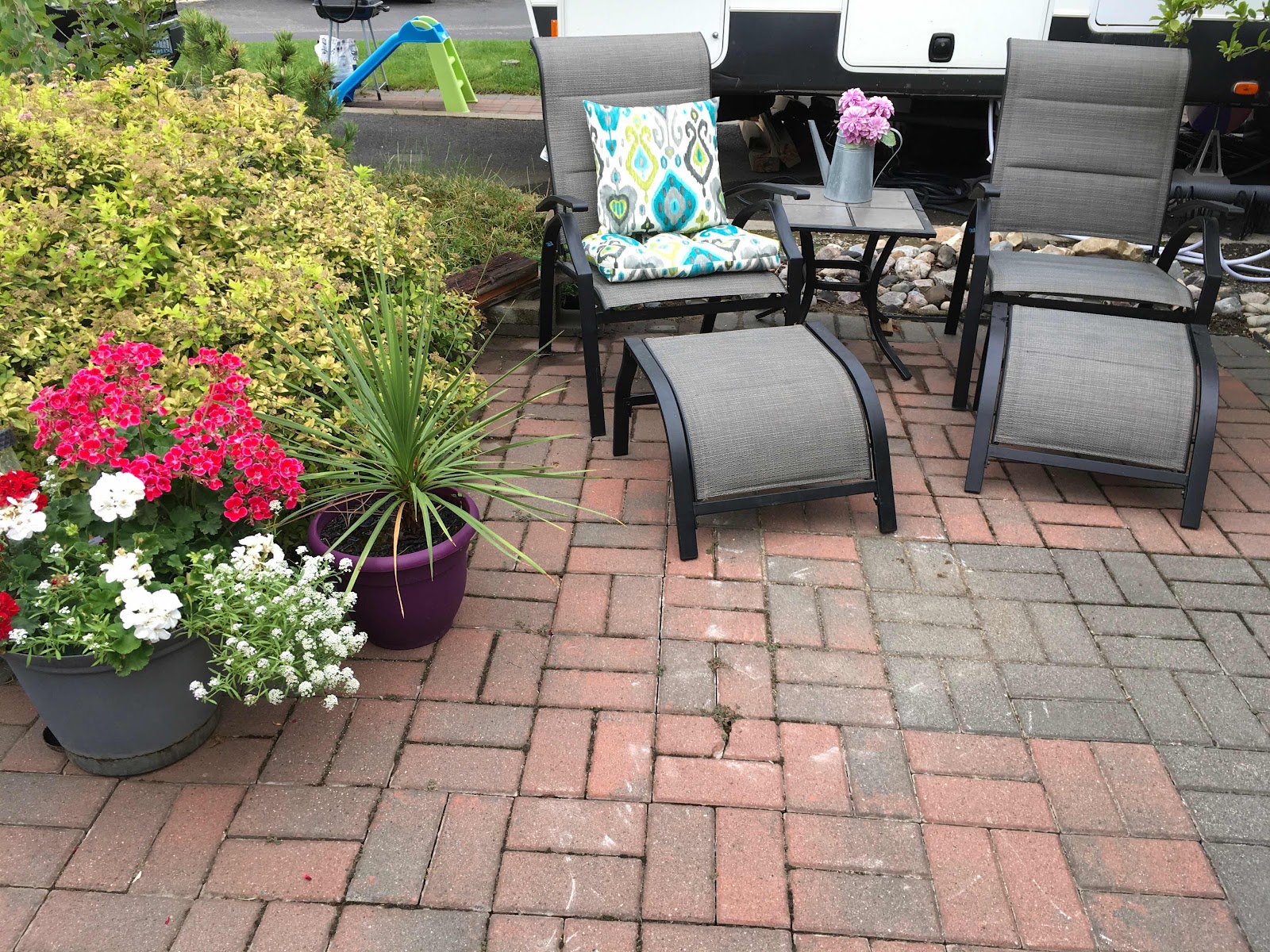 I brought all of my flowers from the lake and the little statues that I had around the outside of the house.  We also have the fountain there by the front of the trailer and our grill.  All of the comforts of home are here! 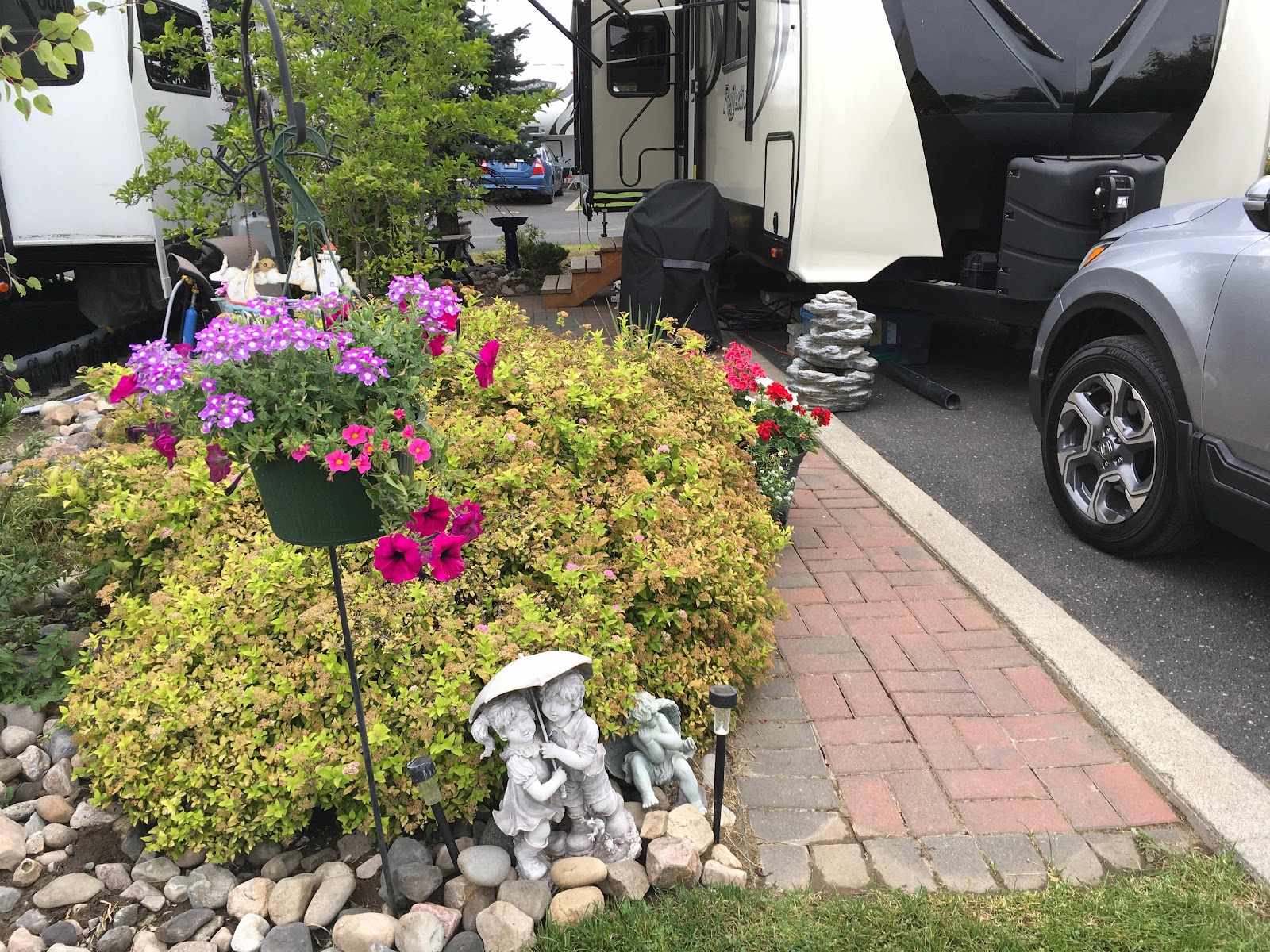 My birdbath came along too, as well as the angel statue. The birds have already found the bird bath and are a joy to watch, especially in the mornings.  I also have two hummingbird feeder‘s mounted on two of the  big windows of the trailer so I can watch the hummingbirds drink.  I love that! 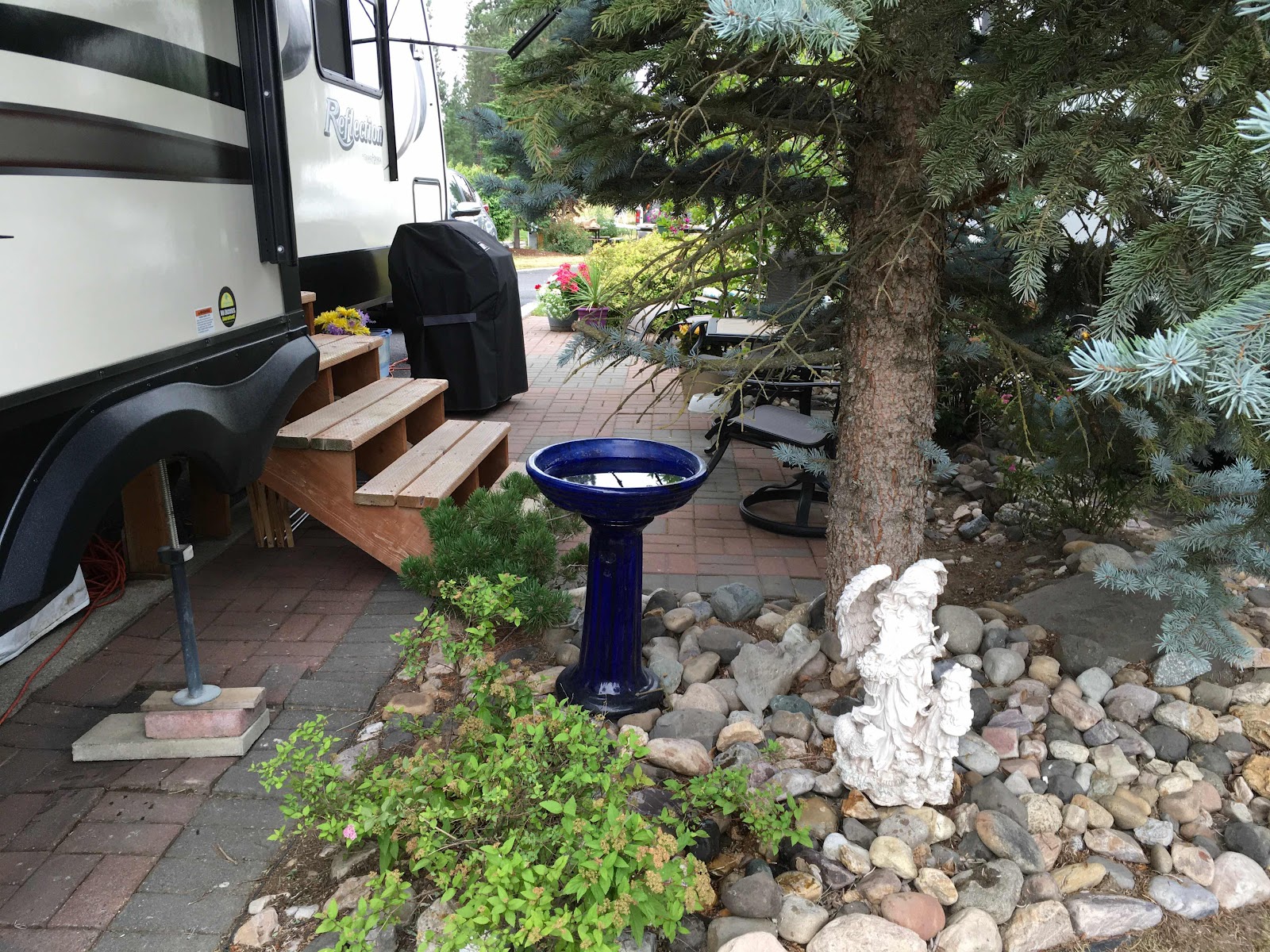 Mandy was going to order some of these ear keepers when I talked to her Wednesday night. I told her I had just been looking at a pattern for them that afternoon and I would make some and send them with her Dad for her,  Piper and anyone else that needed them. The problem was that my buttons are in the storage facility. Somewhere. When it cools off we plan to organize it better but right now I have no idea where they are. I had to go to the eye doctors yesterday morning. Eek!   First doctors visit I’ve had since all of this Covid business began. It wasn’t bad at all and I was driving right by Hobby Lobby so I put on my mask and went in and bought some buttons. This is what I came up with. There are three different sizes to fit different size heads!  They were super easy to make and it took longer to sew the buttons on than it did to crochet them. 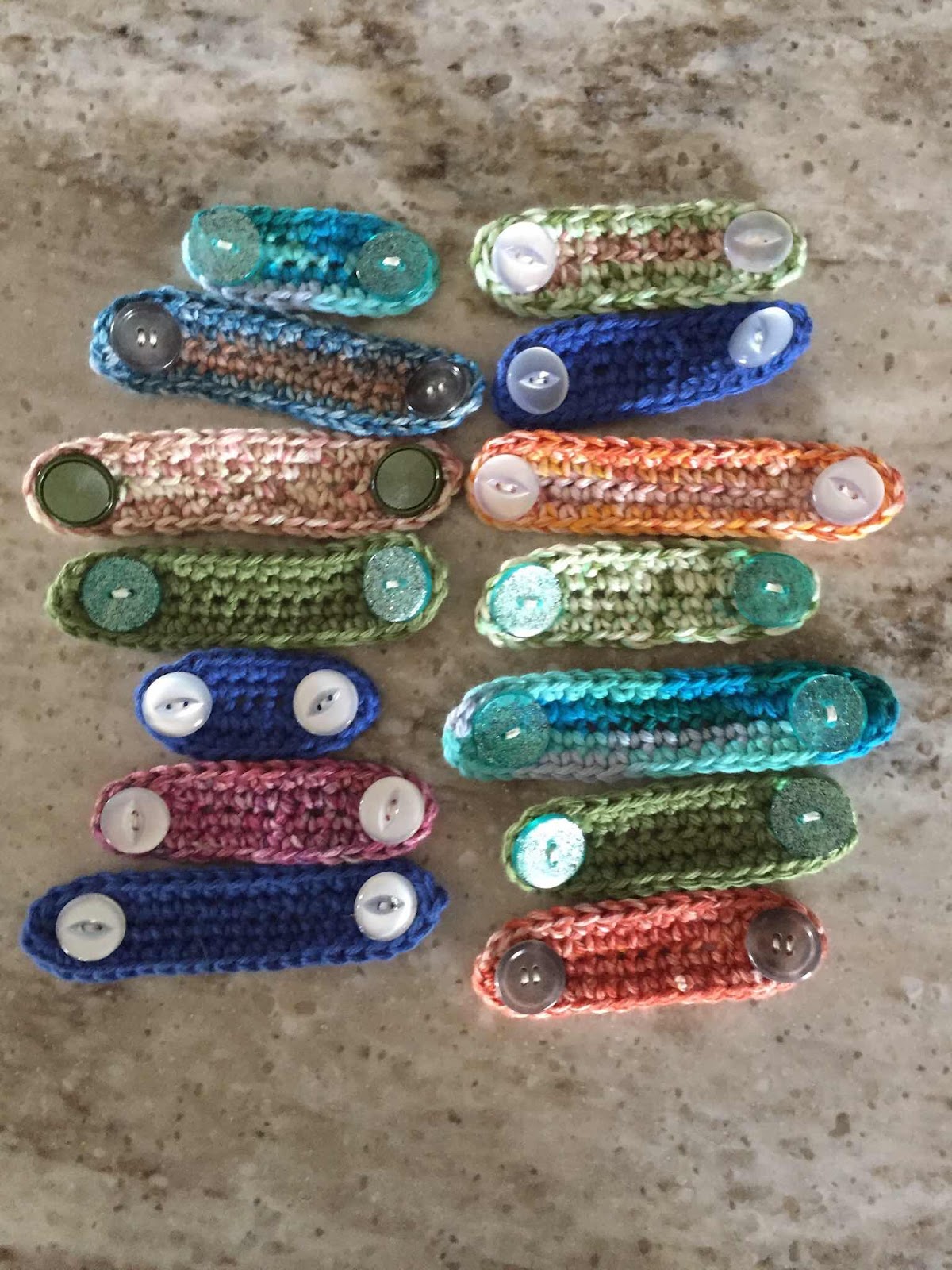 Here is Piper getting ready for her first day at school on Tuesday.  First the traditional picture. 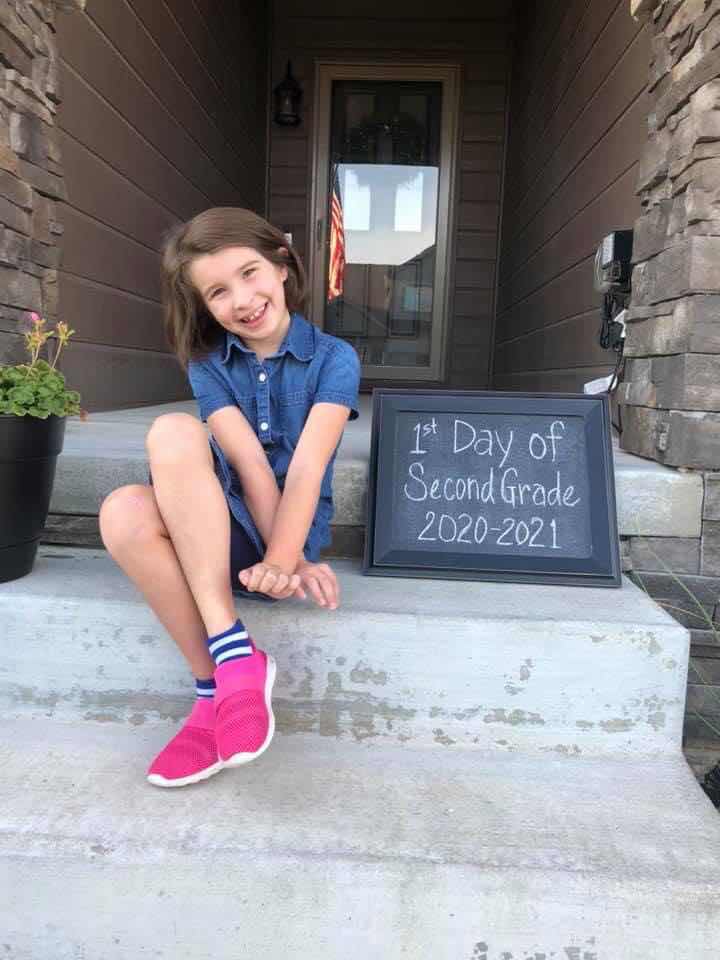 Then the COVID-19 picture.  Look at those long legs! She’s going to be a tall beautiful girl. Let me tell you, her Grandpa can’t wait to see her tomorrow. 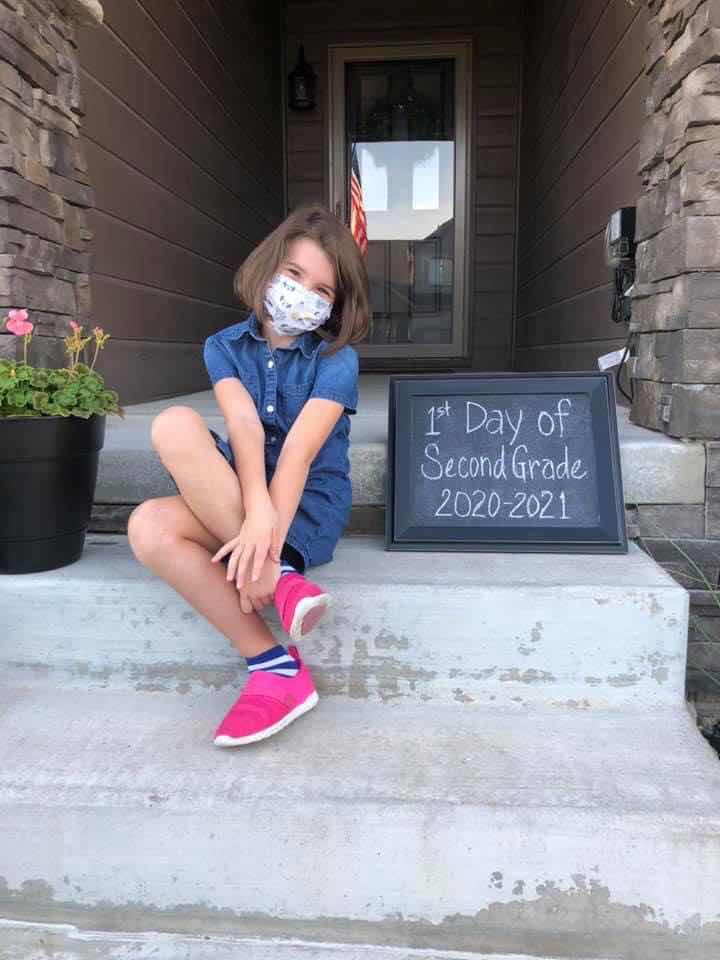 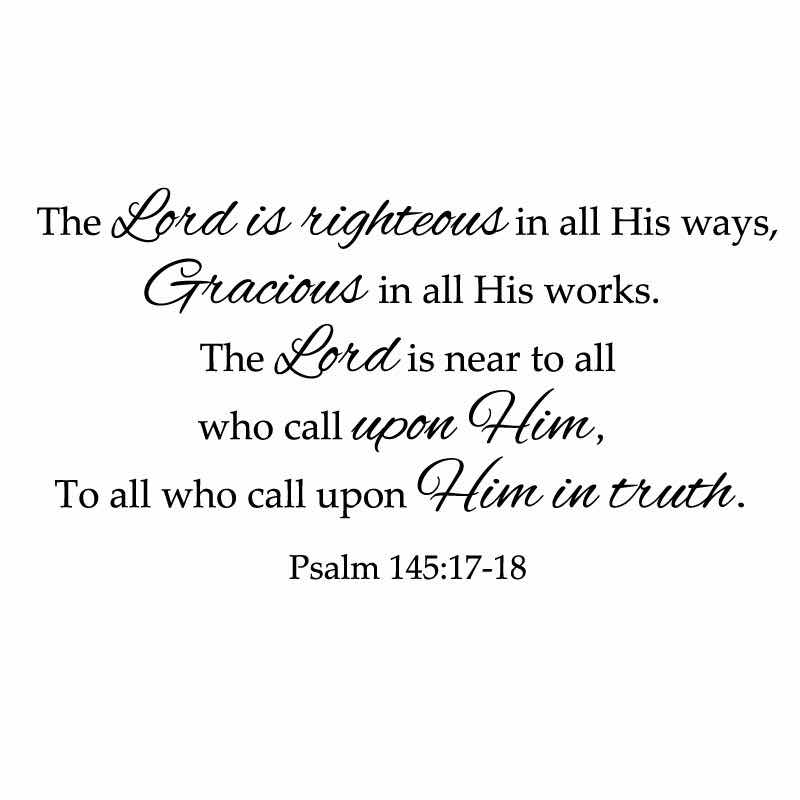 It does seem strange to be here without Dennis, especially being in a new place.  It will be a long five or six days, but I am so glad he’s able to go back and see everyone, especially Karen. His brother got there yesterday and they will have some time together, the three of them, before Doug leaves on Monday to go back to Florida.
I’m praying that you all have a wonderful weekend and that you feel God‘s blessings and mercy all around you. I’m also praying for health and safety for each one of you.
Many Blessings ,
Betsy