It is a veritable sweater factory here! I finished knitting the second white sweater. The first one was a size 6X, this one is a size 4 and will be for Maddie. I haven’t washed and blocked it or sewn the buttons on yet, but here is the second sweater.  The pattern is “Childs Smocked Cardigan.”  I’ve had it a long time and I don’t remember where I got this pattern but I think it might have been Ravelry.  Although that sleeve on the right looks longer because of the way the sweater is laying, it is exactly the same length as the left sleeve!  Ha! 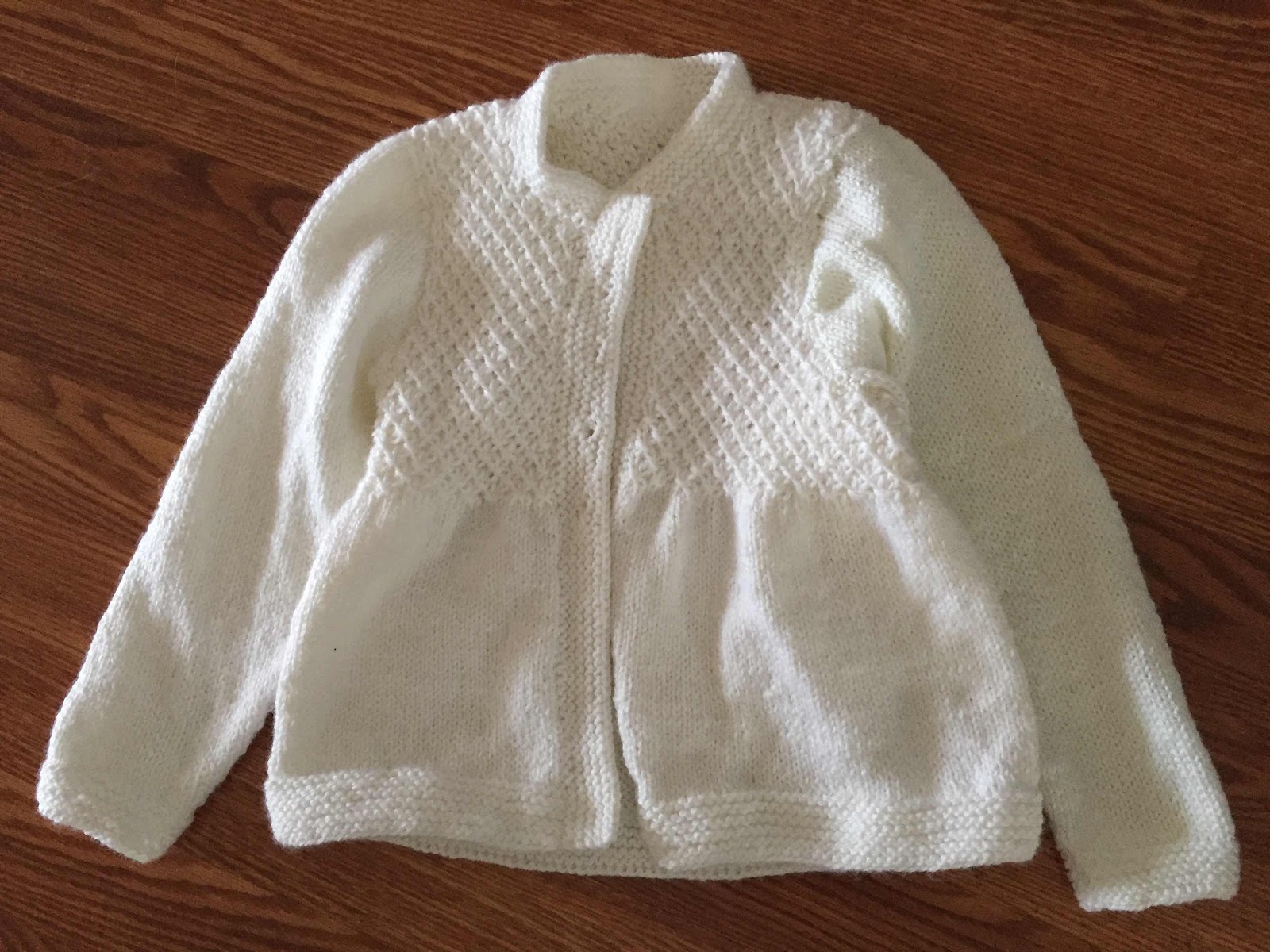 This next sweater is called the “Olinda,” and it is a paid for pattern off of Ravelry.  As I started knitting this sweater which is a size 4 for Maddie, I remembered how poorly this pattern was written. After several frogging’s around the armhole, I finally remembered what I needed to do to correct the pattern. Hopefully, when I start Aria’s size 6X it won’t be as much of a struggle.   One sweater is this light lavender color and Aria’s will be a light pink.  I’m going to knit cap sleeves. The pattern gives you options of long sleeves or cap sleeves. Piper has several sweaters in this pattern in various colors and wears them almost constantly. 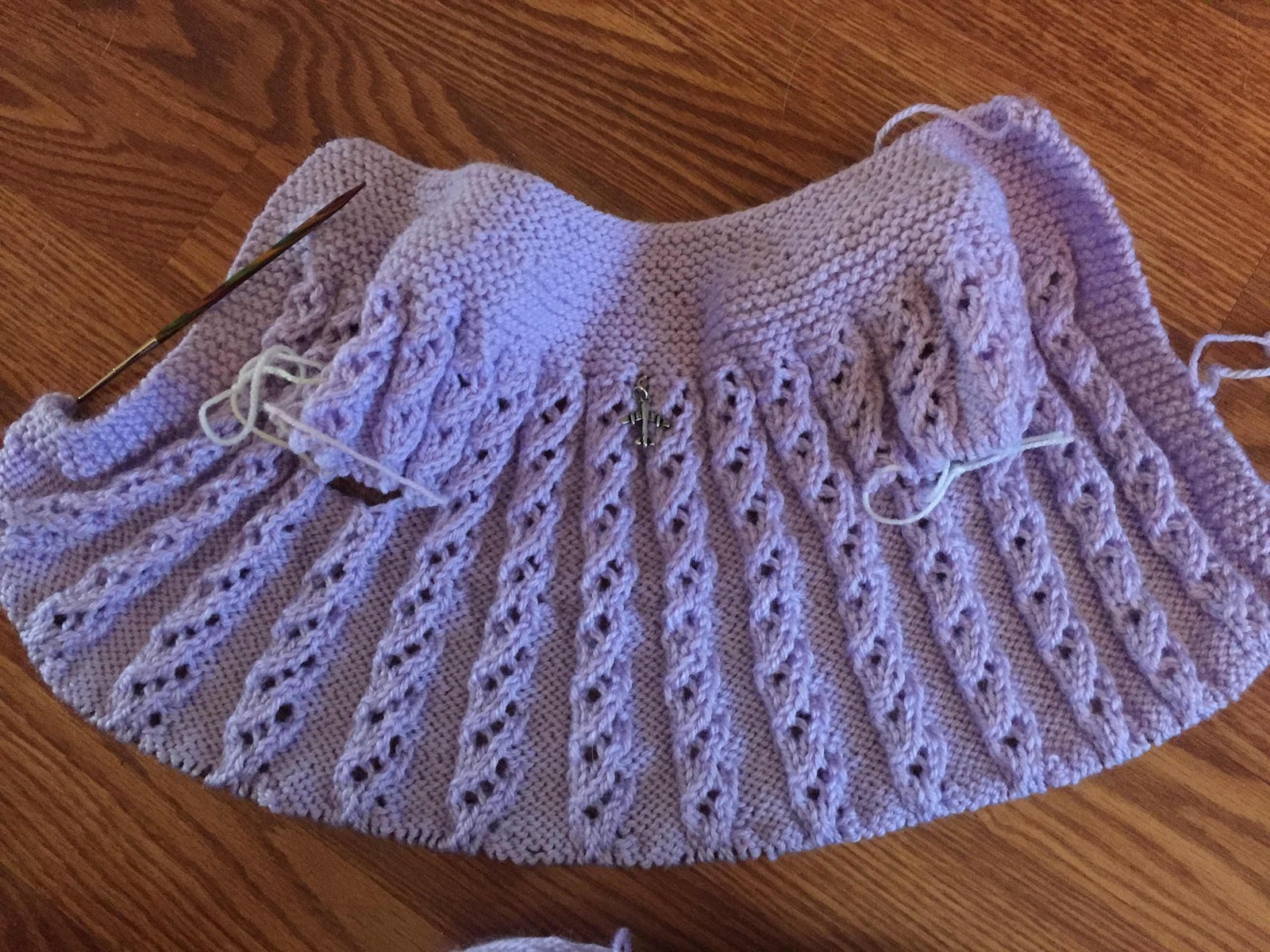 A few people asked who Maddie and Aria are. They are Karen‘s little granddaughters and she wanted them to have the sweaters from her. Of course I said I would be happy to make them.
Two more pair of mittens were completed. 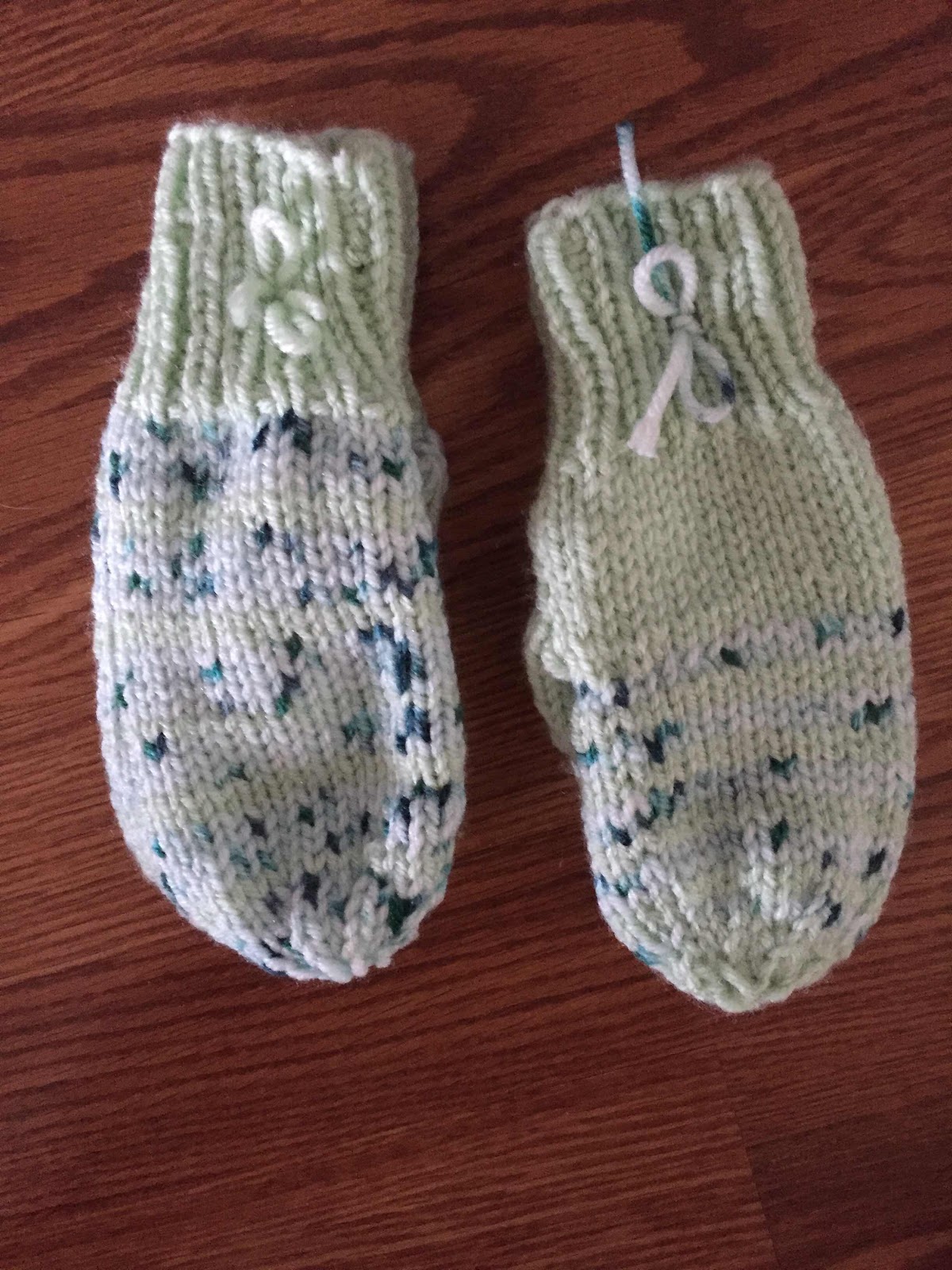 Mandy took some photos last week while Dennis was in Omaha. His sister Karen is on the left, then Dennis and his mom.  Mom doesn’t look like she’s 84 does she? 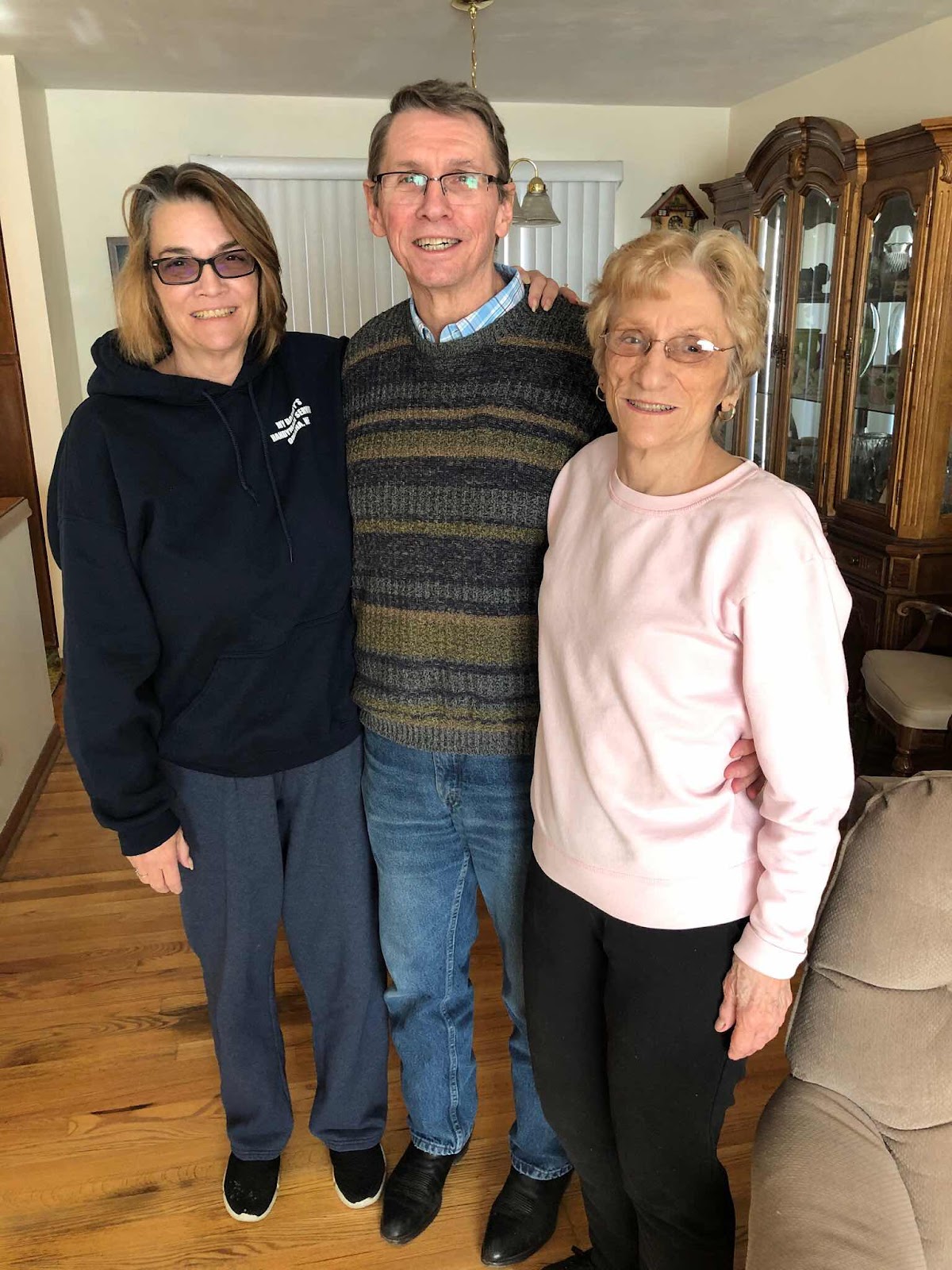 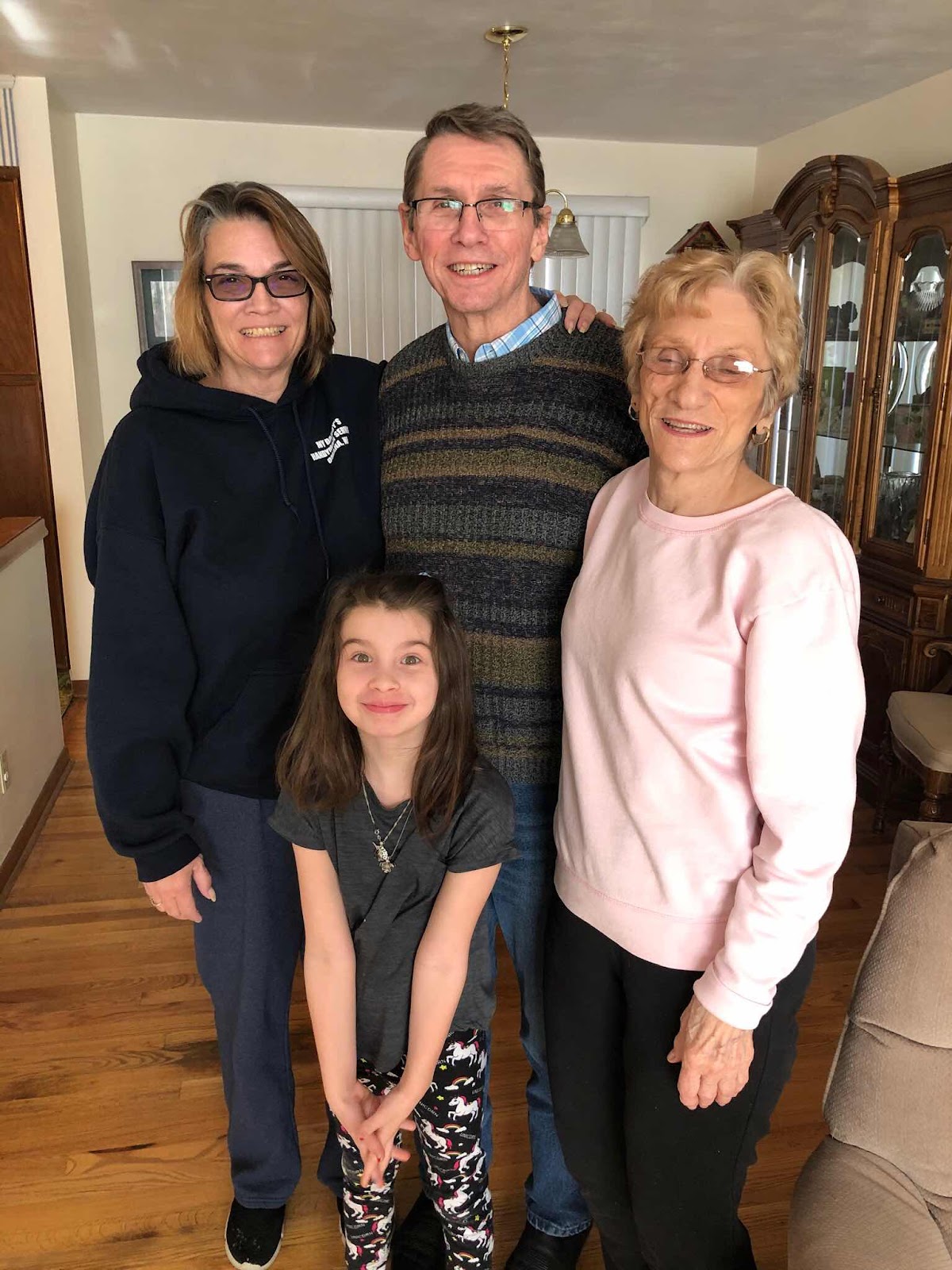 And finally, Piper took this picture so Mandy could join them. I think she did a great job. 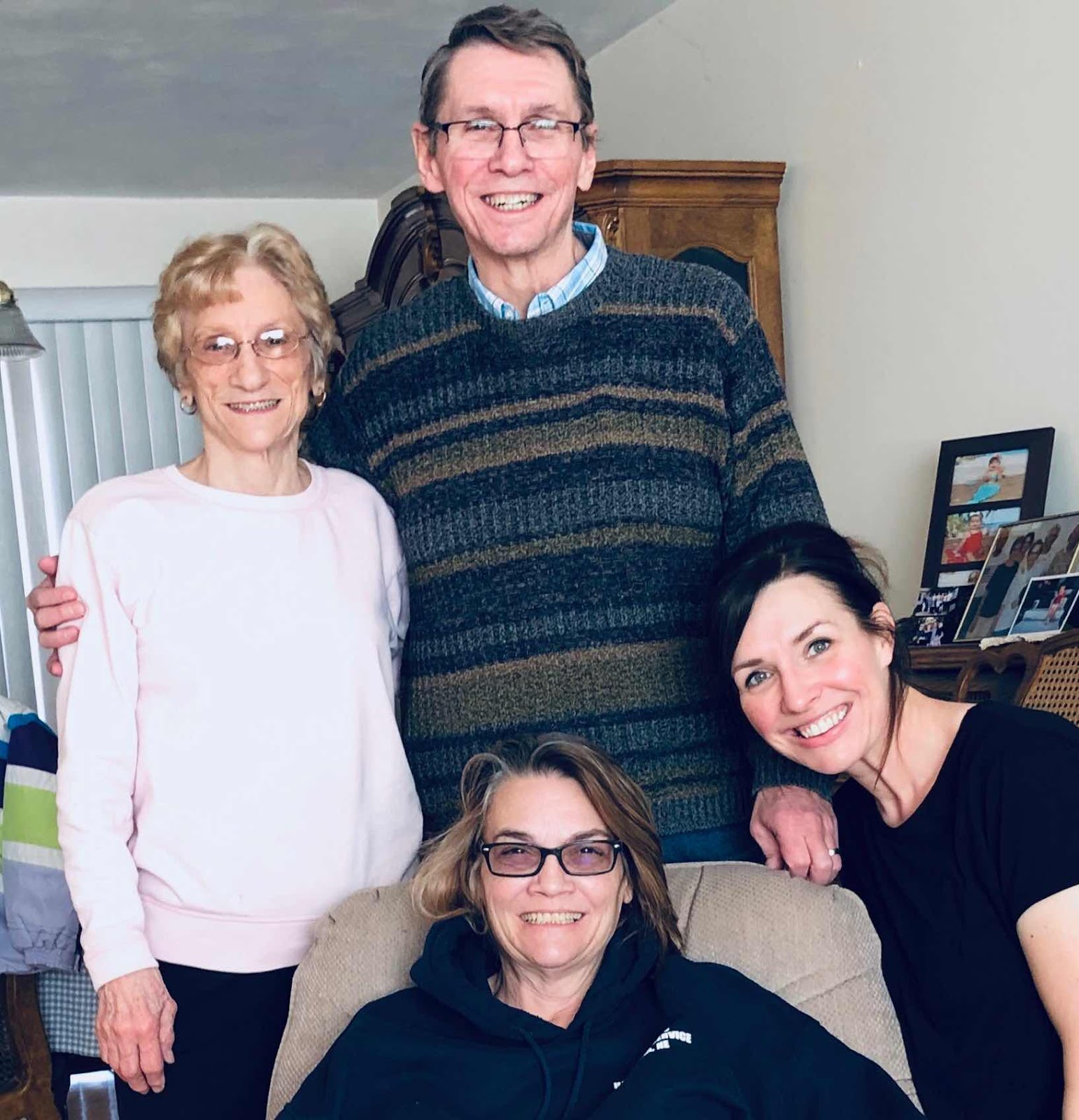 I have some errands this morning and this afternoon I will go to the retirement home to knit with the ladies there. Tomorrow night is our Bible study Christmas party here at our house and it’s also Dennis’s 64th birthday.  Where does the time go?  Mandy will be 40 on the 20th and I will be 60 on February 1.  Sixty!  Where did that come from? :-)
Dennis had his endoscopy on Monday and he did very well. The doctor said that by just looking, it doesn’t look as though the Barrett’s Esophagus has progressed any since his last endoscopy three years ago.  That is VERY good news. Of course they did biopsies and we have to wait a week or two to find out the results.
Although it has snowed a few times in the last week, the daytime temperatures have been in the 40s and everything has melted quickly. However, that is supposed to change and change drastically. This weekend we are supposed to get snow. Lots of snow.  And the highs are predicted to be in the single digits next week. Yuck. I was hoping we would get off with an easier than normal winter this year but apparently that is not going to happen.
I hope you are all having a good first full week of 2020.  I’m keeping all of my friends in Australia in my prayers. The fires there sound horrendous.  May God protect everyone, especially the firefighters who are putting their lives in danger daily.
I thought I would share my favorite Bible verse with you today.
“But those who hope in the Lord will renew their strength. They will soar on wings like eagles; they will run and not grow weary, they will walk and not be faint.”  Isaiah 40:31
Blessings,
Betsy