Uh-oh! We have been hacked! So, apparently someone has hacked into our computers and we had a rude discovery over the weekend. They managed to get way too much from our account. Thankfully hubby checks our accounts regularly and it was caught quickly. Our credit union will refund the money into our account and file a police report against the perpetrators. Apparently they have their URL and some names. I hope they get them! It’s ridiculous that you have to worry about these kinds of things. If people just put half the effort into working at a job and doing honest work as they do into stealing, this world would be a lot better place wouldn’t it? But, meanwhile our accounts have been closed and we’re going through the process of redoing everything. Including our computers being wiped clean, hopefully, of anyone being able to do this again. That means I can’t comment on any of your blogs because I have to do that on my laptop. I can make posts on here, but I can’t comment on anybody else’s. I will be reading them though. Never fear! I’ll be thinking of all of you and hopefully it will only be a few days before we get our computers back. Meanwhile this is an absolute mess to try to clean up.
But hey, it’s not all bad news! Dennis, my sister Melanie and I went to a concert last night in Kearney, Nebraska. After that we stayed the night at a Holiday Inn express only about a block away from the venue. We were able to walk to the concert and walk back to our hotel room! Our kids bought us VIP passes to see the acappella vocal group “Home Free.”  These tickets are our Christmas and birthday presents from our kids. Mandy and Brad bought ours and Tim and Chaela bought Melanie’s. It was absolutely wonderful. It’s Melanie’s third time seeing them in concert, but our first. She has had us hooked on listening to them for the past several years, but we’ve never been able to attend a concert before.
The VIP tickets got us into a Q & A a session with the guys. We were given some swag and CDs and were able to watch the Soundcheck. We also had second row seats right in the center. It was absolutely wonderful. There were two other groups that sang a couple of songs before Home Free and they also sang a few songs with the group. The entire concert lasted over three hours! It was a great gift and we were blessed with wonderful sunny skies and temperatures in the 40s for our trip. There’s always a chance of snow and ice this time of year and since it was a 3 hour drive each way, we were praying for good weather.
Here is Home Free, the main attraction. Love these kids. 😍 The guy on the left with the cowboy hat is from the group Texas Hill, and he came out to do a song with them that they co-wrote. It’s the first time I’ve ever seen these five guys use any kind of instrument in their singing. 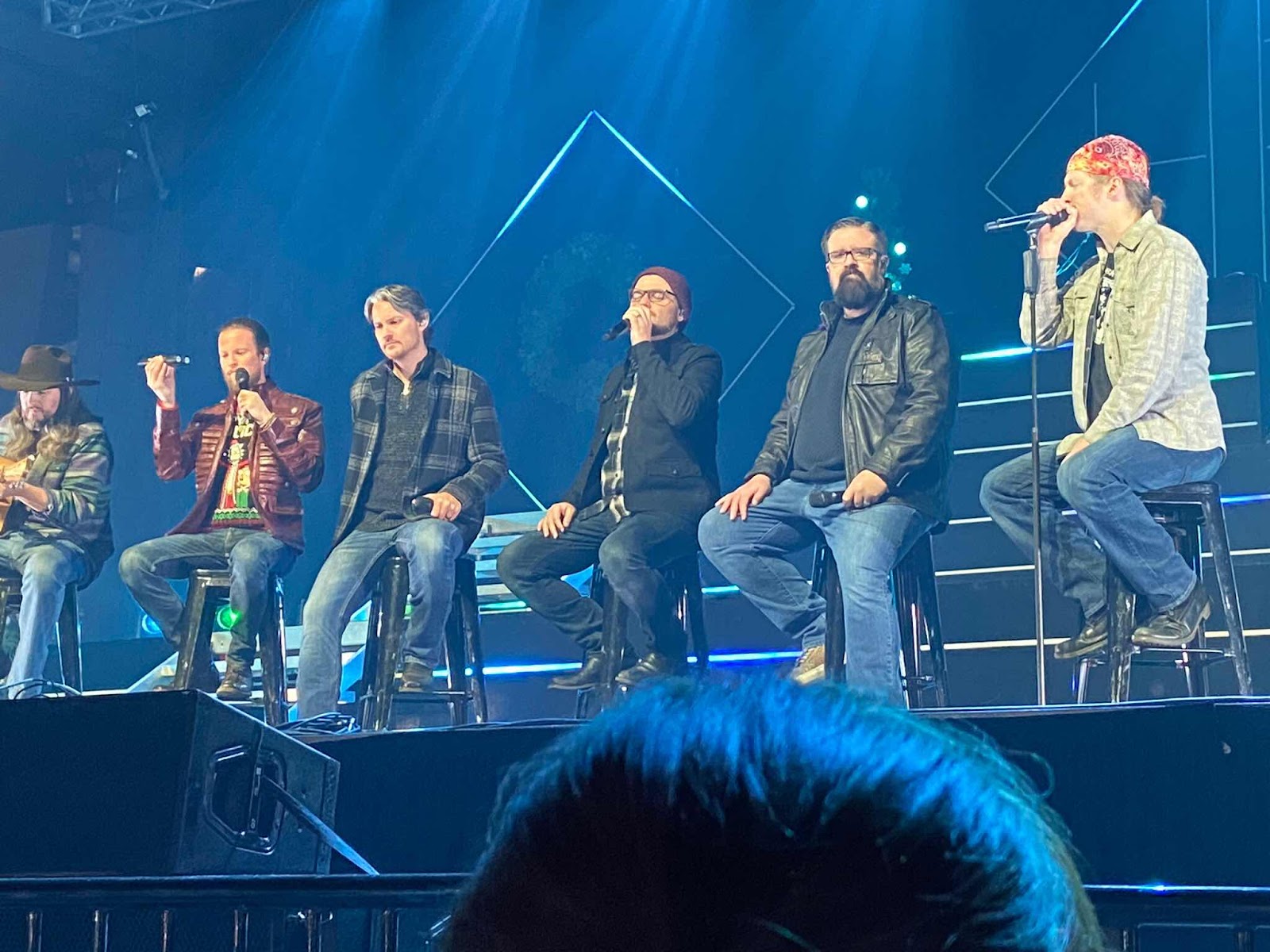 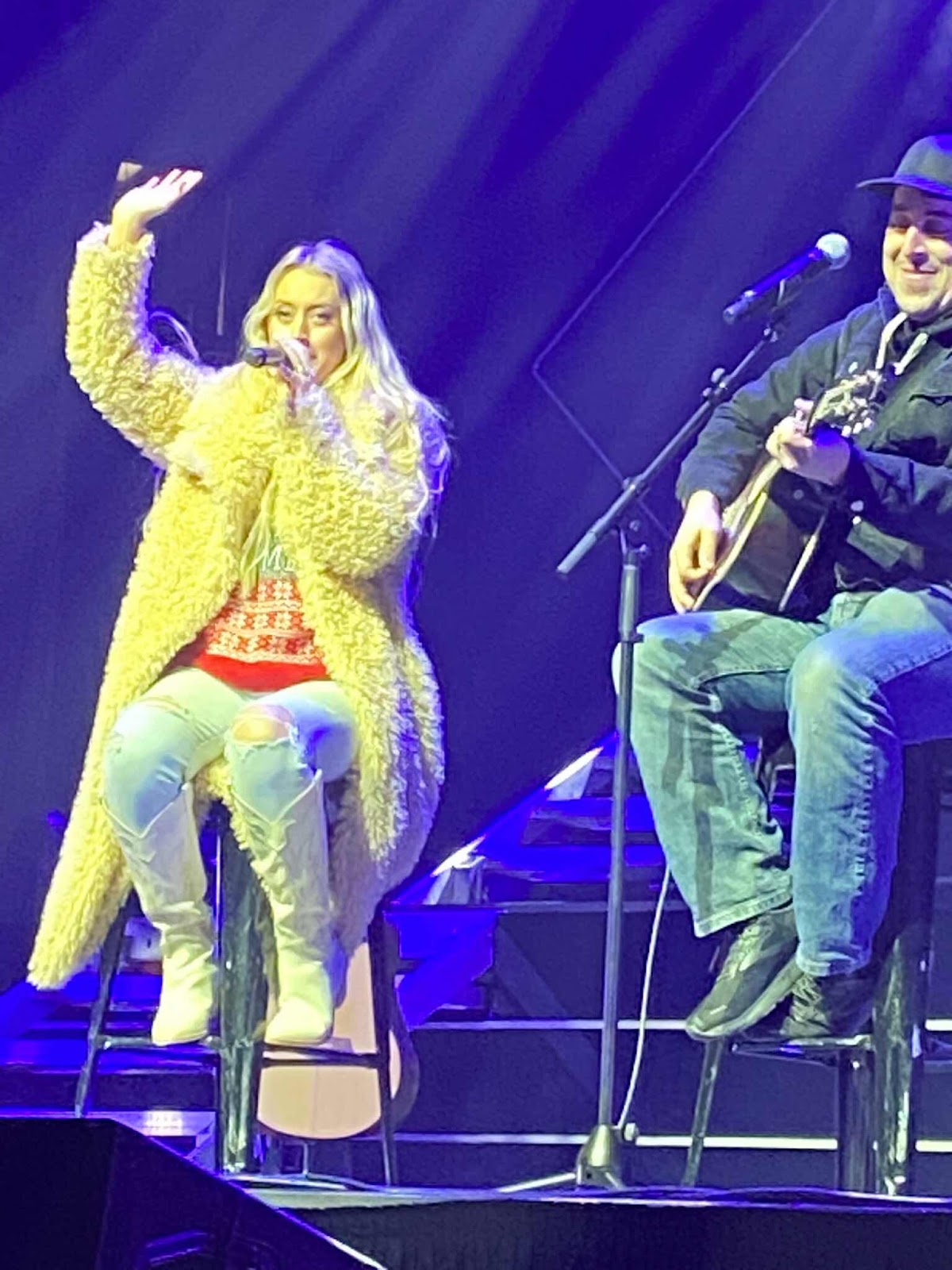 These are “our” guys. They’re about the same age as our kids and we just love their sense of humor and the way they interact with each other and the audience. They aren’t really “performing” in a sense because they talk to the audience constantly and include them as part of the show 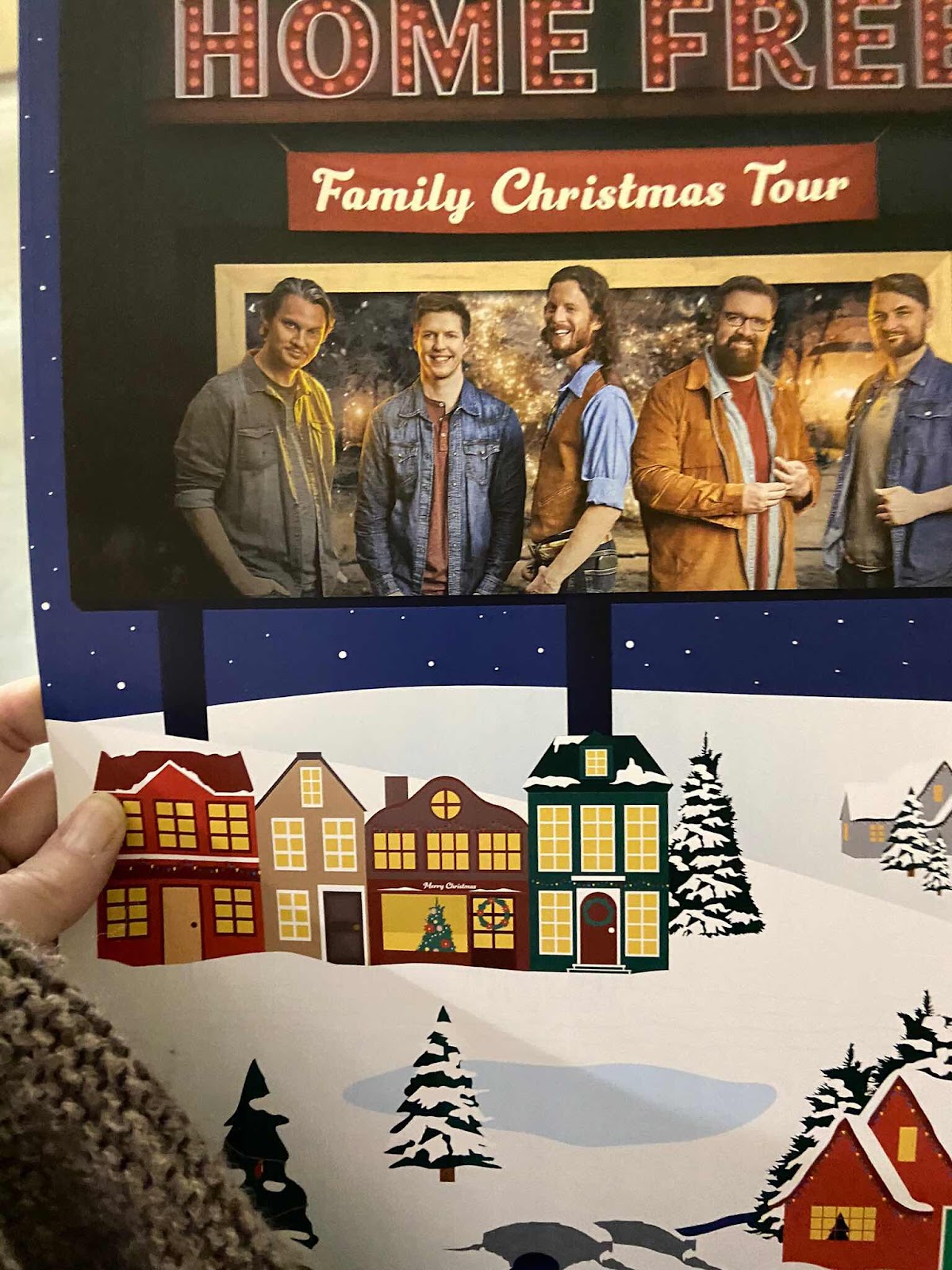 My handsome guy and yours truly. 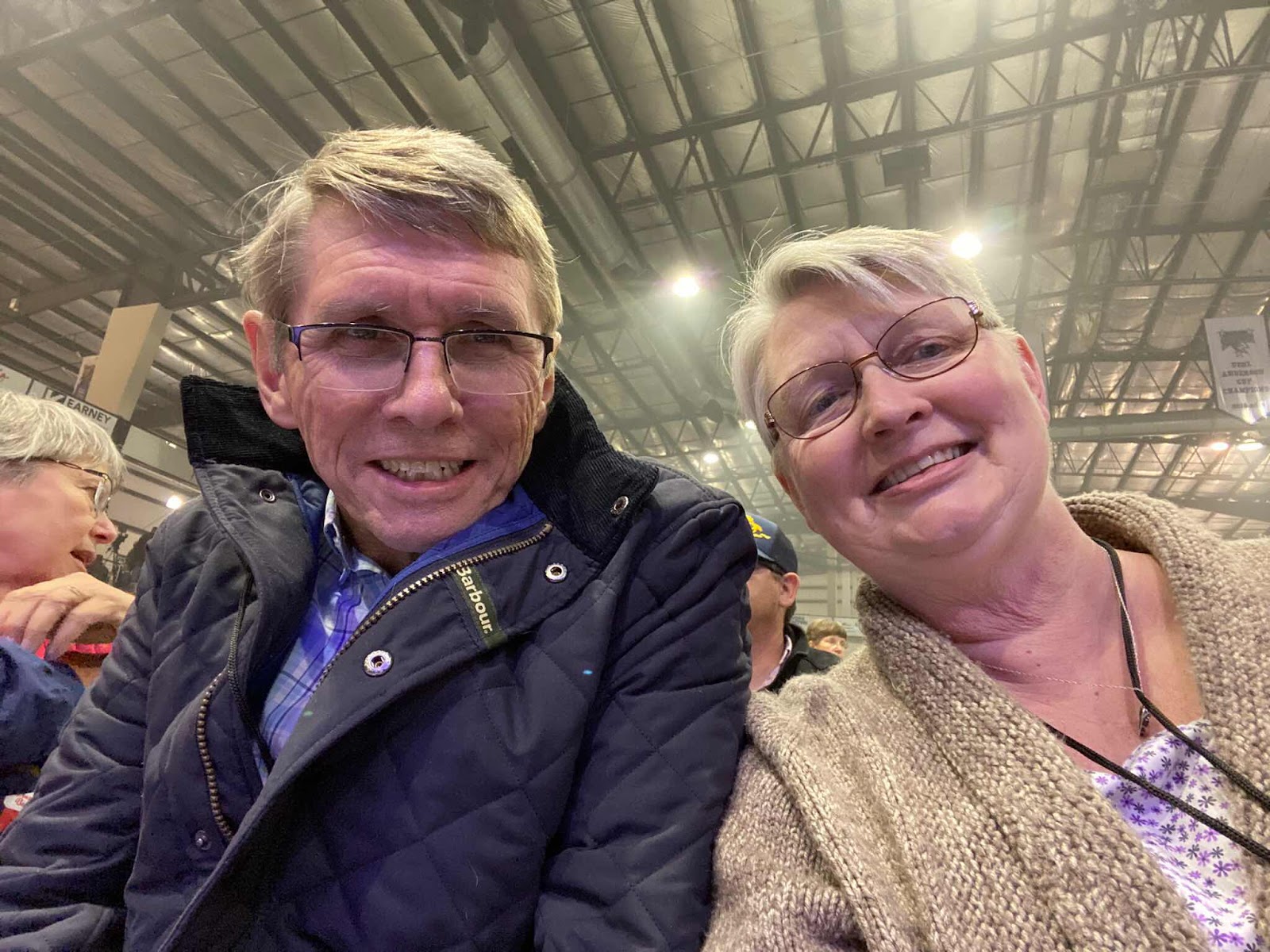 My big sister. We sure love each other and are enjoying being together again after so long apart. 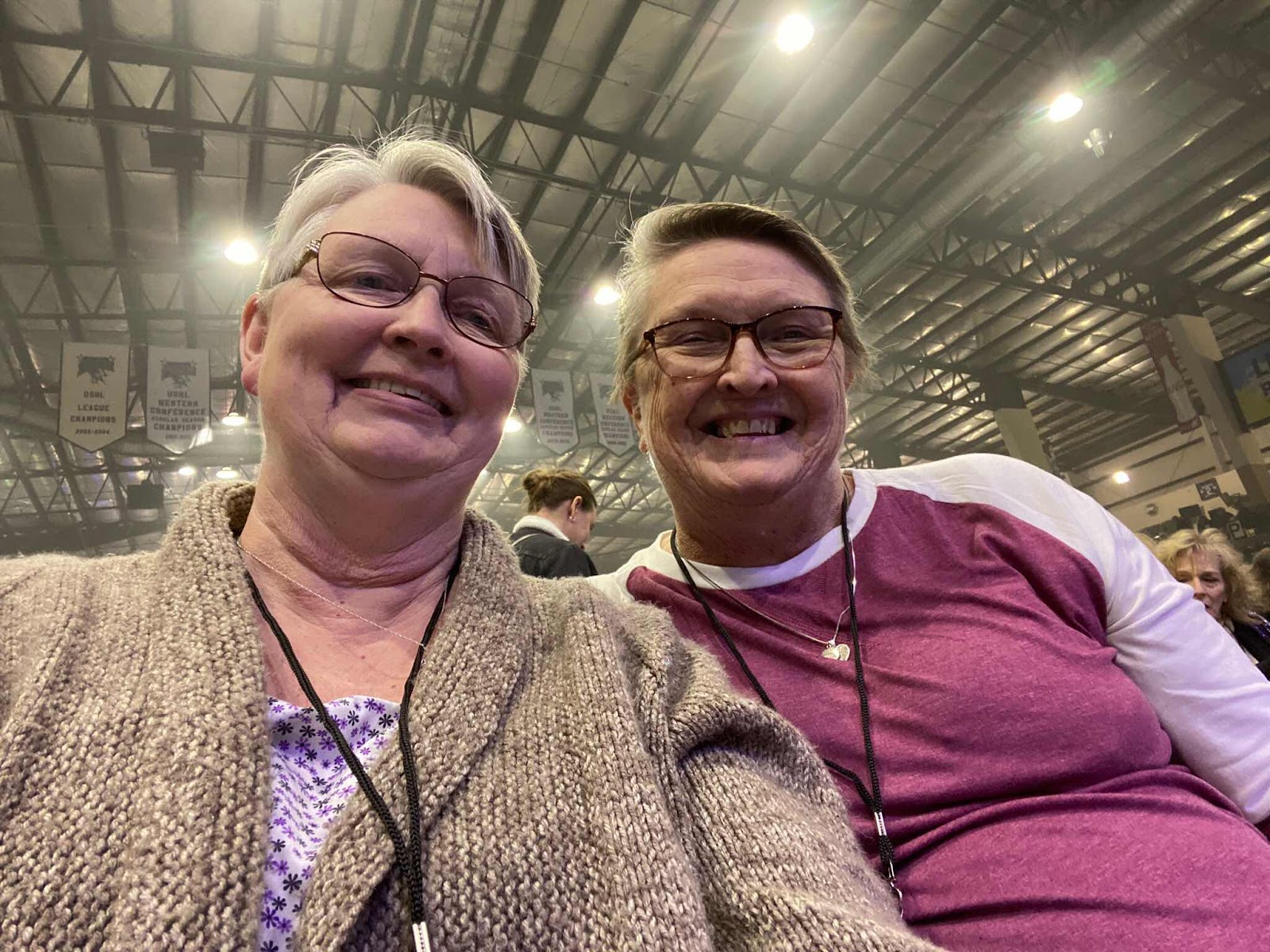 We took this photo from our hotel. See that building in the background? That is the venue for the concert. We just walked down that road and walked back after the concert. Everyone else had to pay $10 to park at the arena, but we had free parking at our hotel! And it was good exercise. Because, get this, we were sitting on top of a hockey arena for five hours! The walk warmed us up. Between the VIP stuff and the three singing groups it literally was five hours. I had a sundress and flip-flops on, but luckily had taken a sweater with me. Everyone was freezing, including the people singing. It was warmer outside after the concert than it was inside, so I’m guessing it was probably about 40F inside! I am always so hot because of my medication‘s and I had no idea that it was an ice arena. Nobody did. No one was dressed appropriately for being in 40° temperatures for that long. We’re hoping that none of us get sick from it, especially the singing groups, because they have about 20 more concerts to do this month. We must not have been too cold, because we went back to the hotel and got the car and went and got ice cream shakes!😂 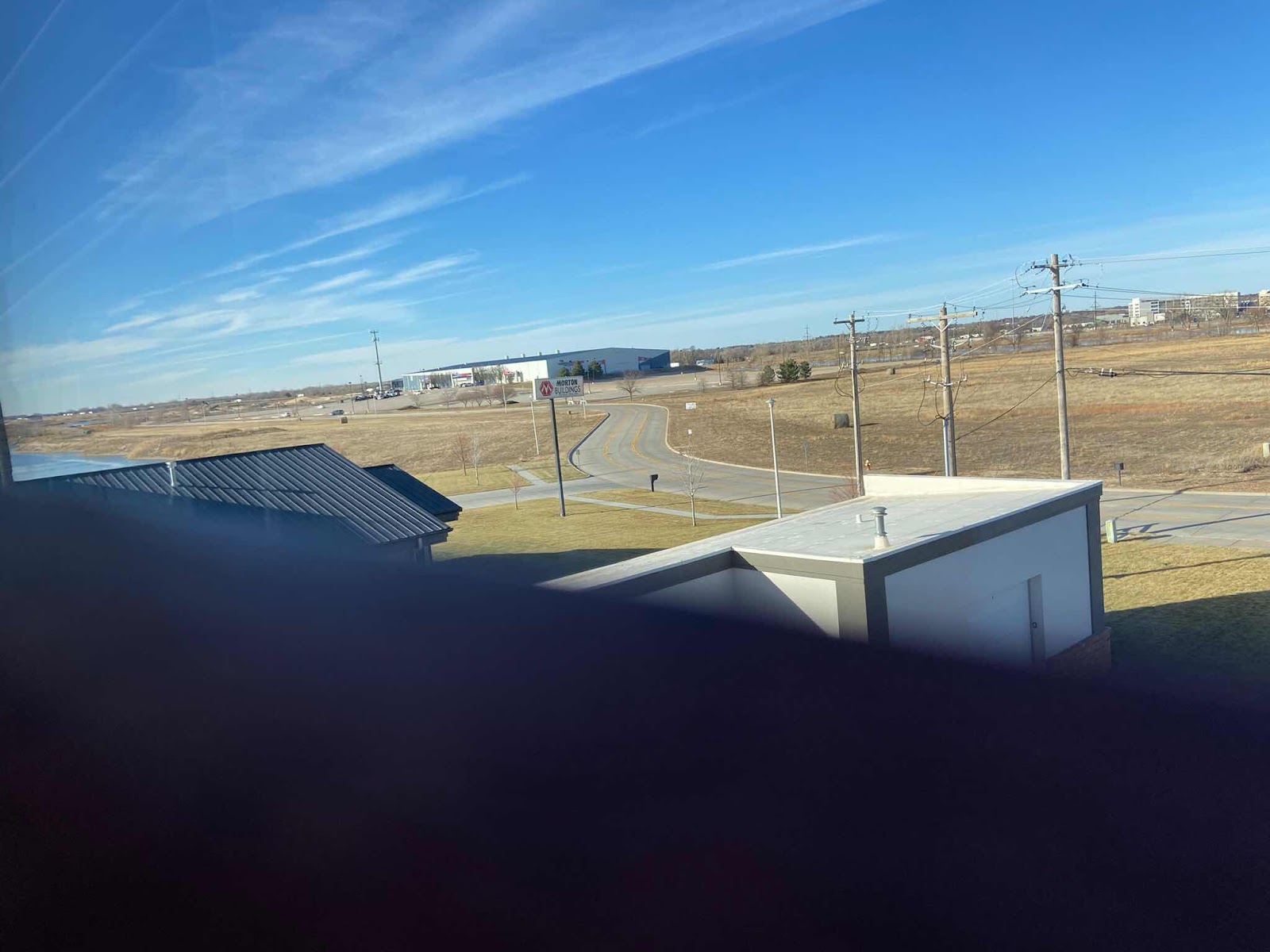 As we drove home on interstate 80 this morning I saw this flock of white birds lift up from a cornfield and stay in this tight formation as they flew westward. It was impossible to see what kind of bird they were, but it was fascinating to watch as the cloud of white undulated as they disappeared from sight. 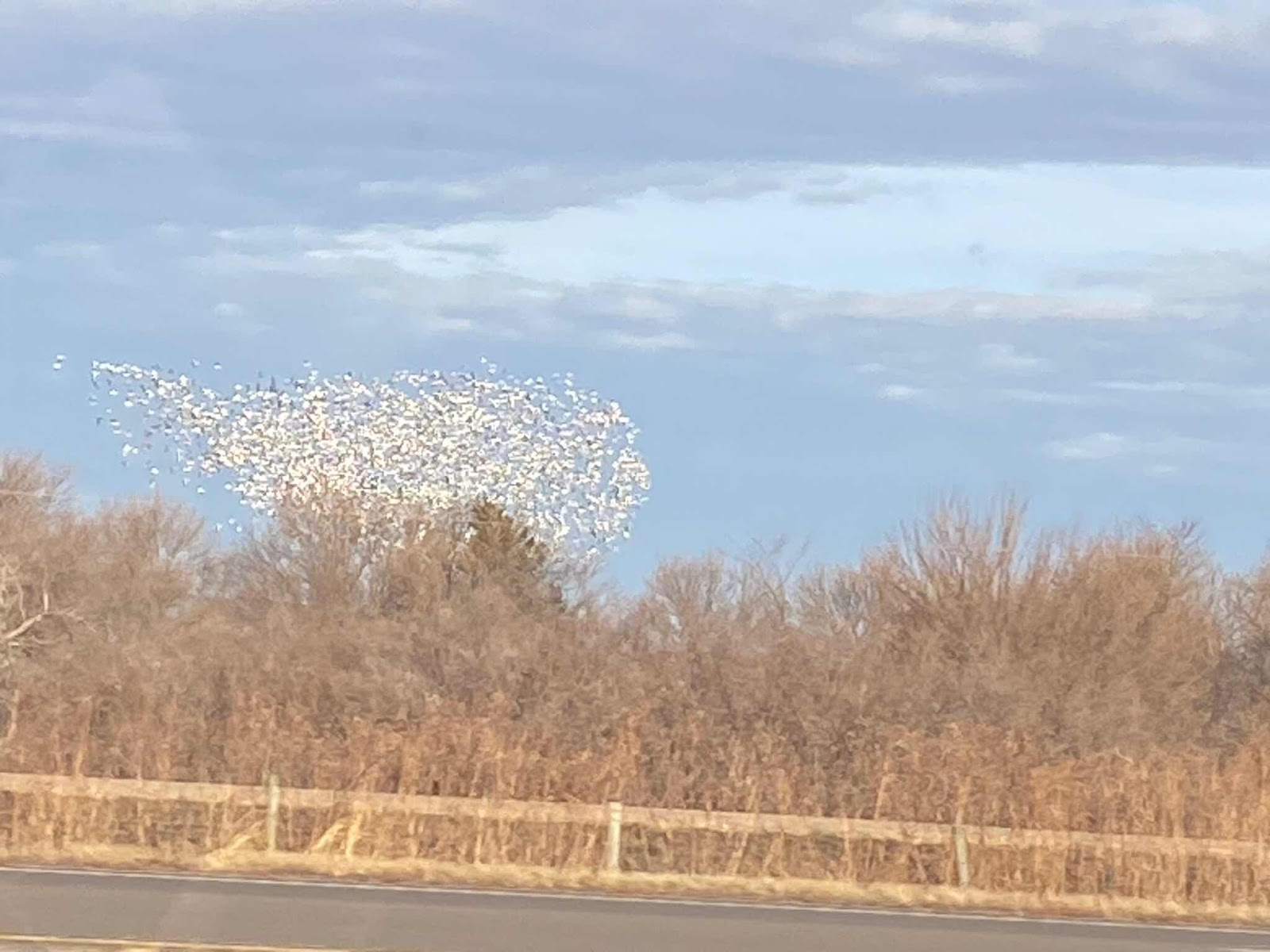 On that note I will close. I did knit most of theway there and back but I can’t show you what I made. As I said, I’ll be back commenting on your blogs as soon as I can but I will continue reading every day. Take care my friends and enjoy December. 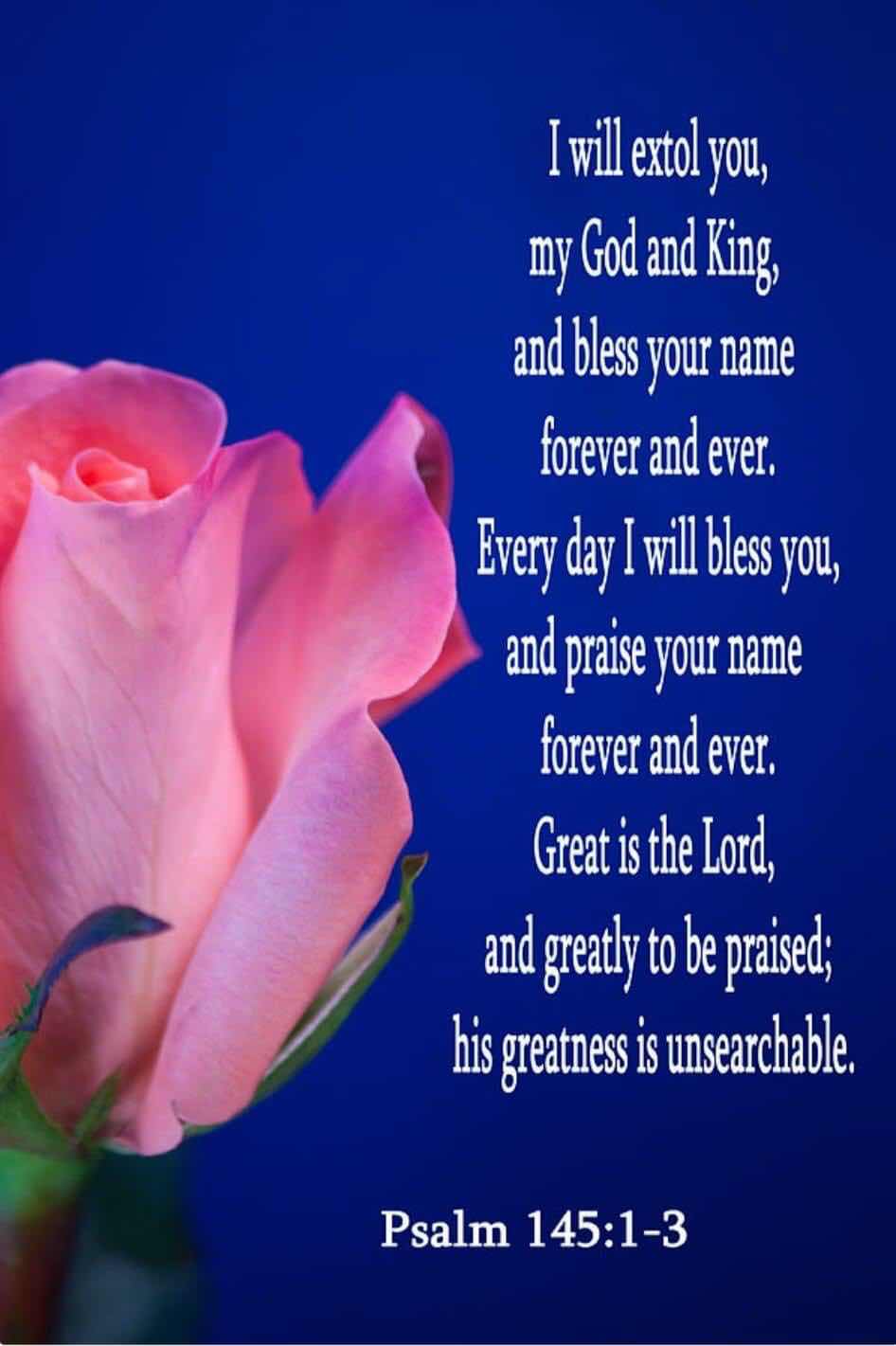