Well friends, we’ve been staying in the apartment since Saturday night. Not everything is unpacked and my beautiful dining room table not only broke in the moving process, but it’s too big for the apartment. That seems to have been the only casualty in the move though, which is pretty good. Dennis will fix it and we’ll put it on Facebook marketplace to sell it and buy a smaller one. Otherwise we are getting settled in and I think we’re going to love it here, whether it be temporary or long-term term. We have been invited to a potluck here Monday night. Since this is our first one we get to go as guests. There is so much going on here every day.
In the second bedroom, yarn was unpacked and put away first of all. Of course. Actually it was the easiest thing to work on unpacking and organizing while Dennis was bringing up other loads. It was easier to just unpack things as we brought them in because we only had 12 boxes to move with and just kept reusing them. 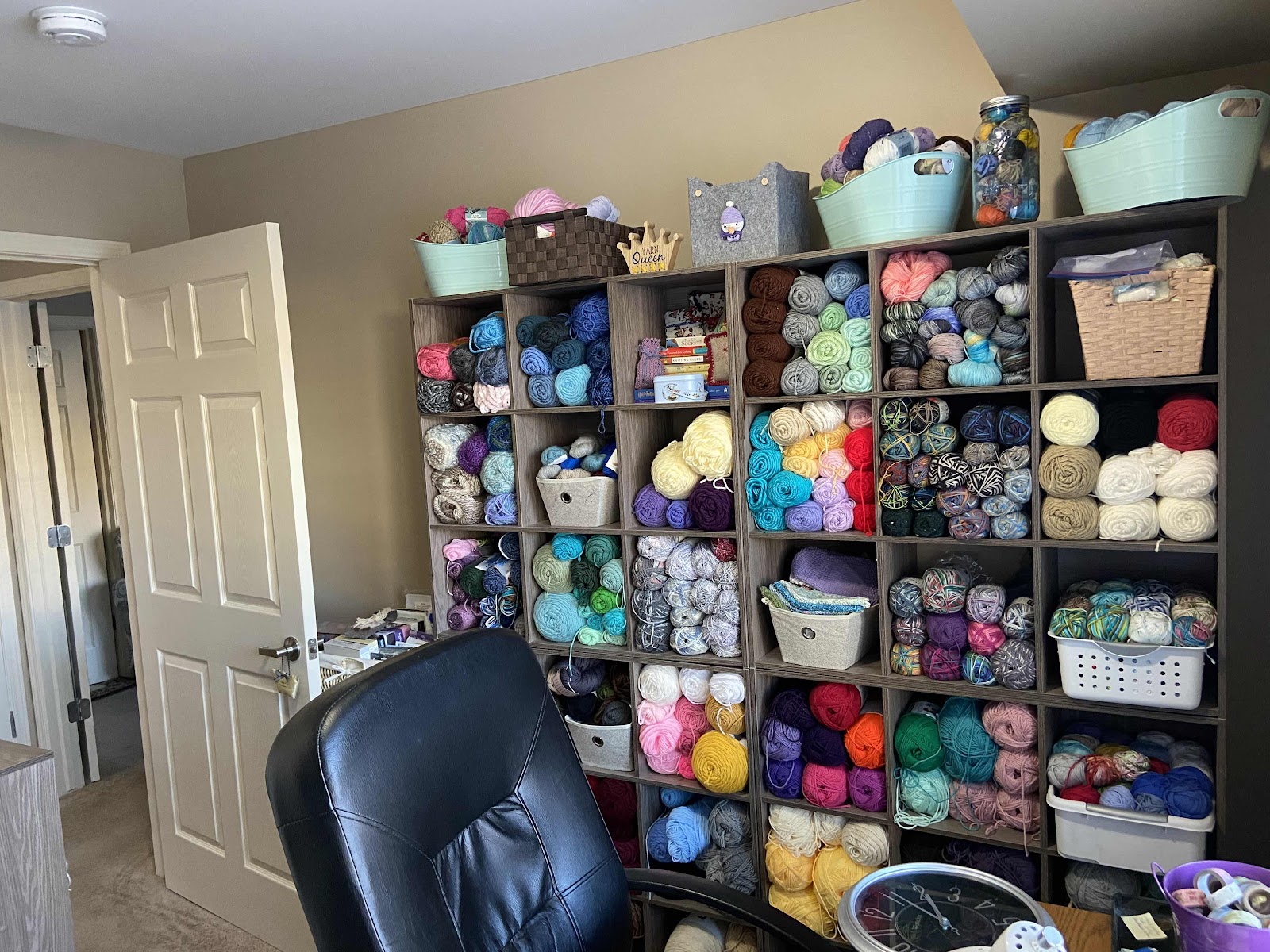 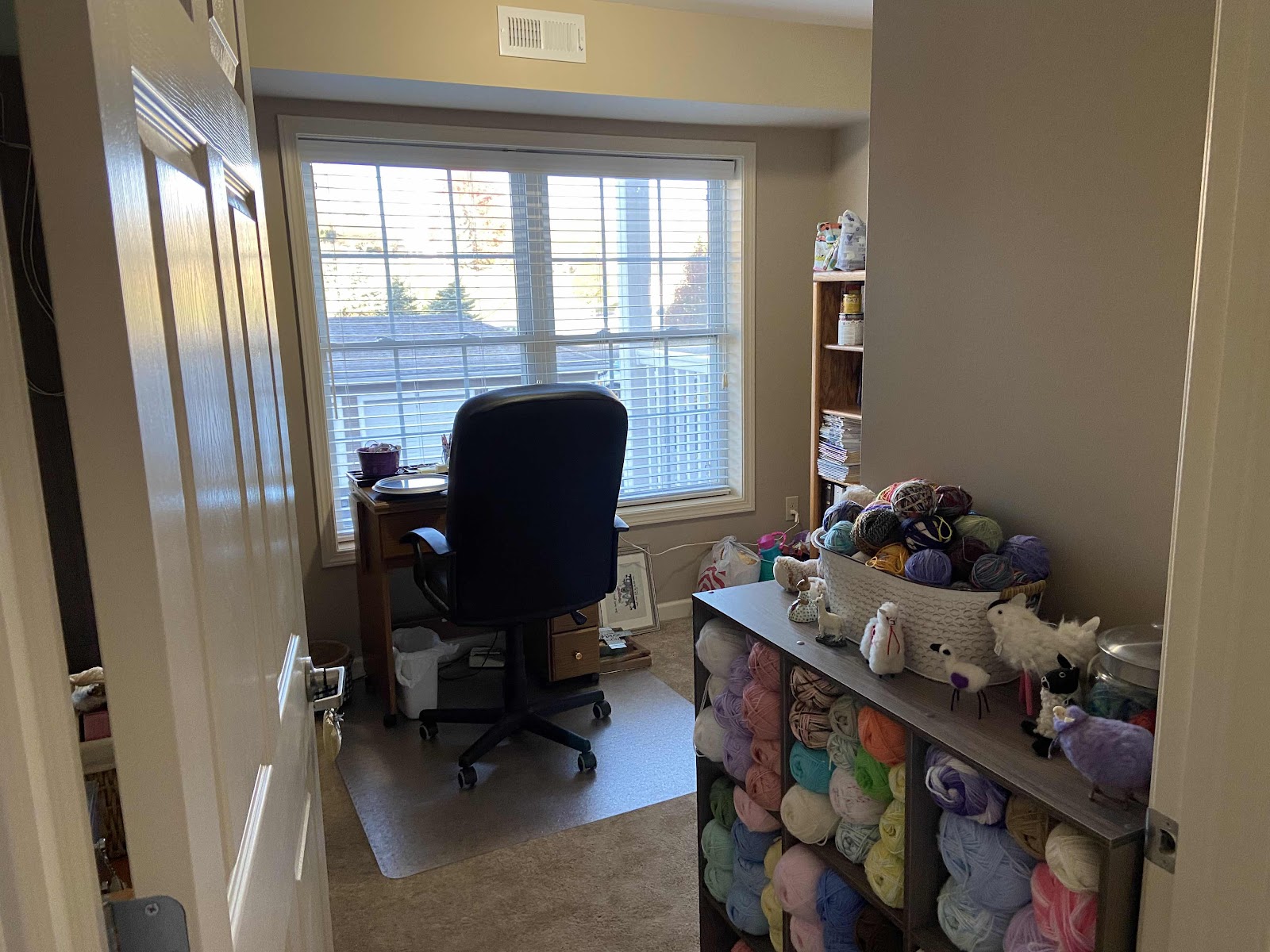 This is the main bathroom. Both bathrooms are very big because they’re ADA accessible. 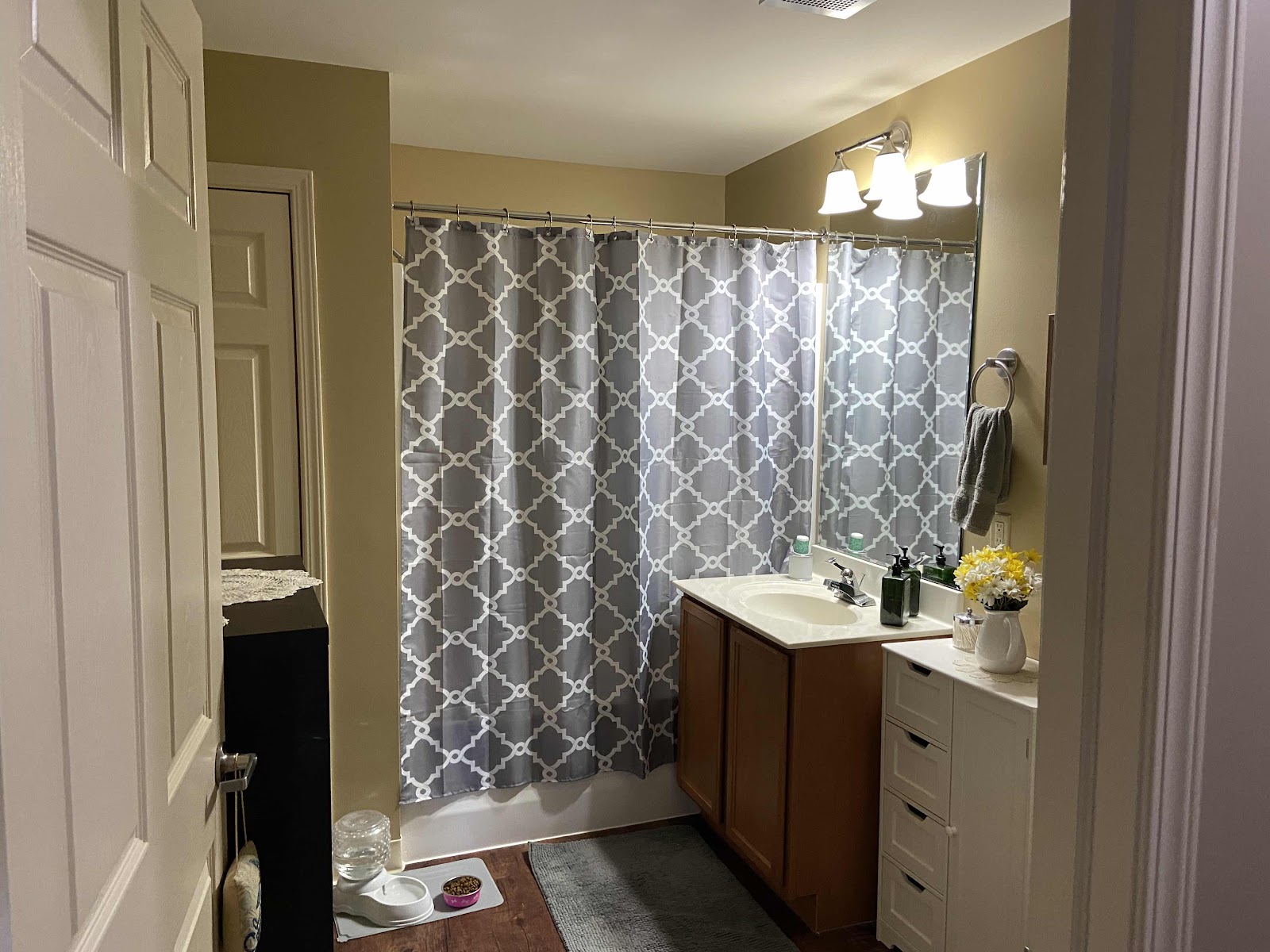 This is looking down the hallway. We haven’t hung very many photos yet. Just the clock so it wouldn’t be damaged. Dennis bought me that clock in the Amana colonies in Iowa for our 15th anniversary almost 30 years ago. 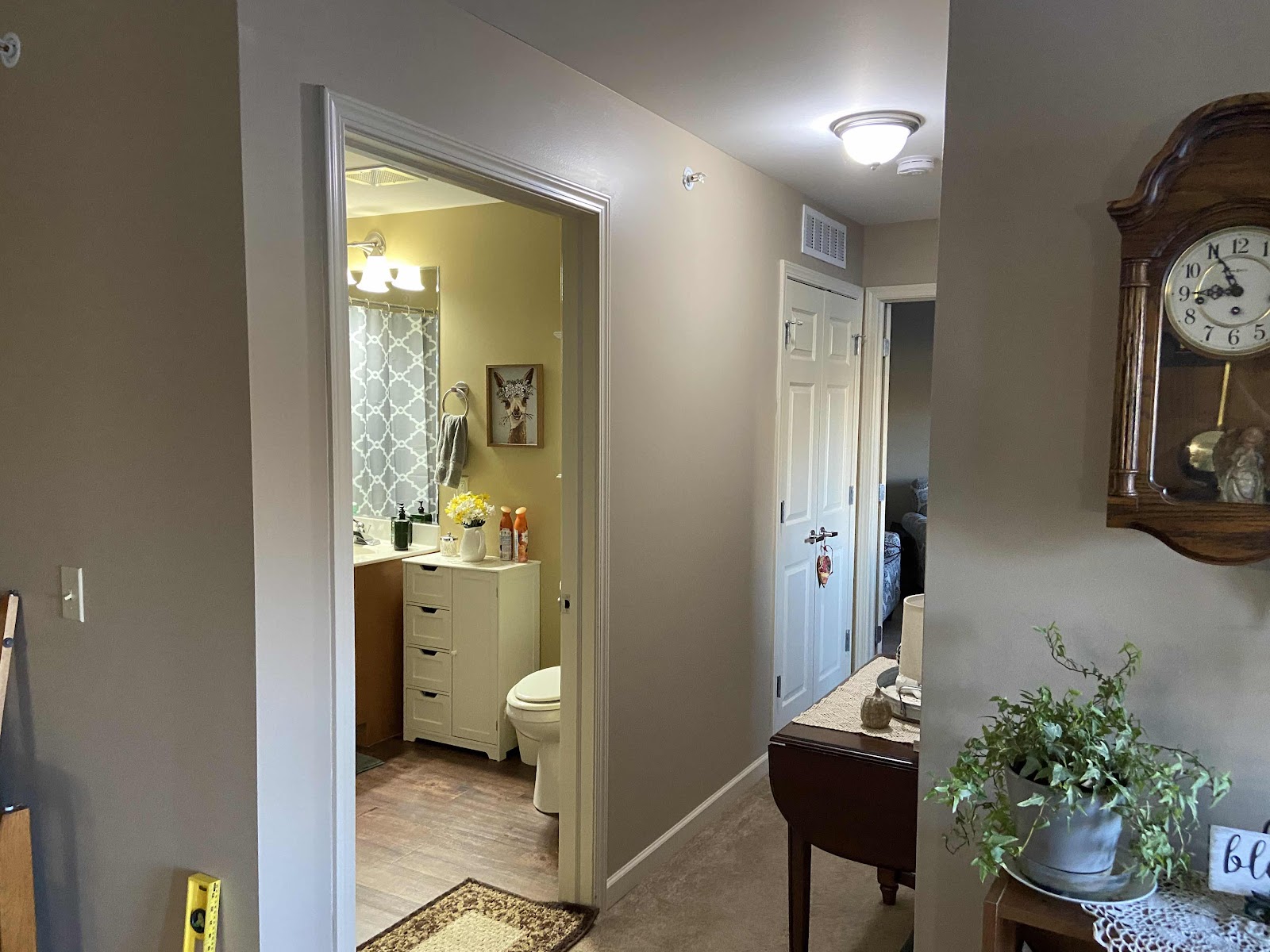 The kitchen is a bit of a mess. I don’t have as many cabinets and we had to cram our freezer in there too. Once the food is gone from the freezer, we’ll probably put it in our storage unit to create more room. 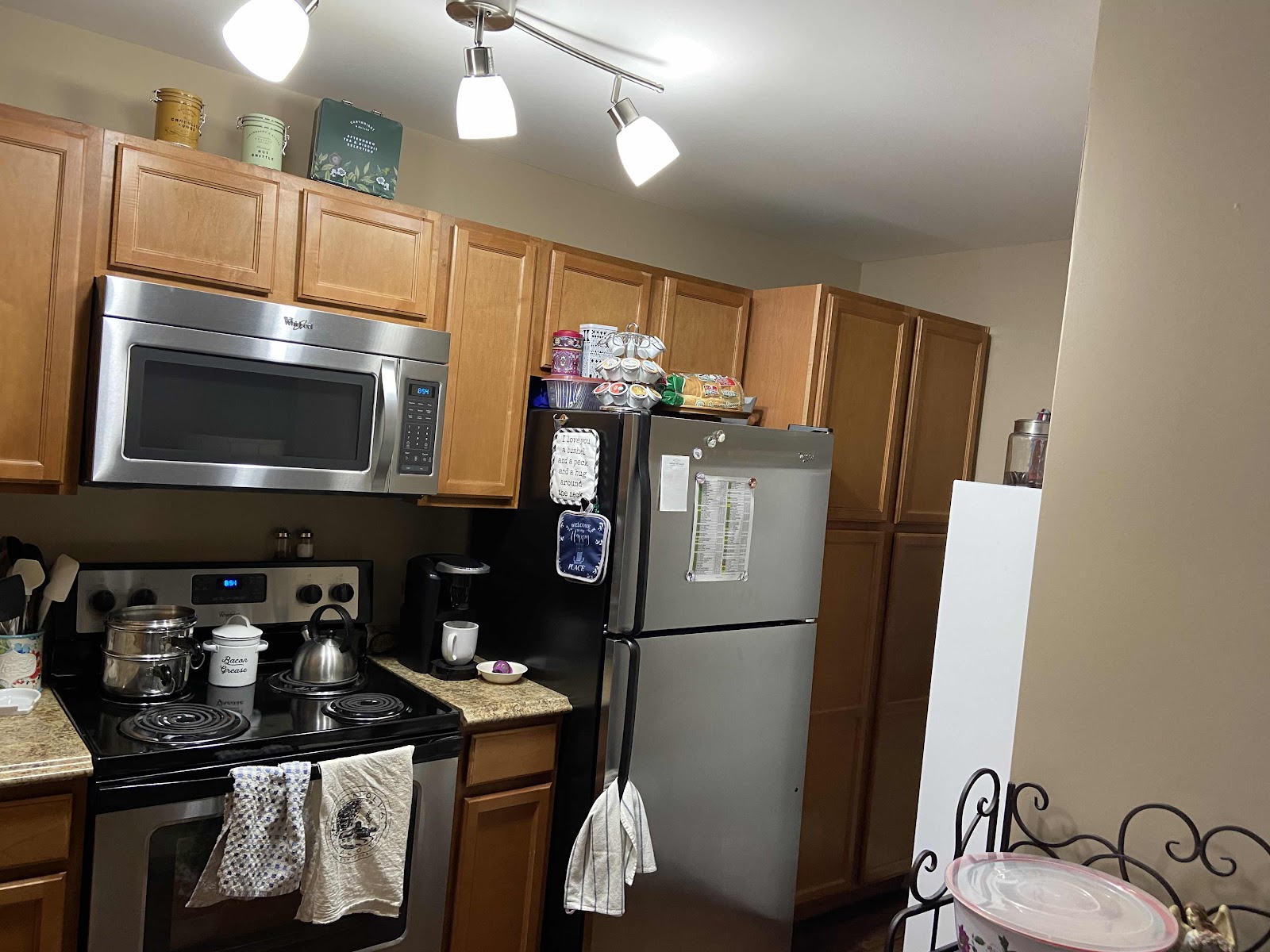 Again, please don’t look at the mess. This was the first day of moving in. 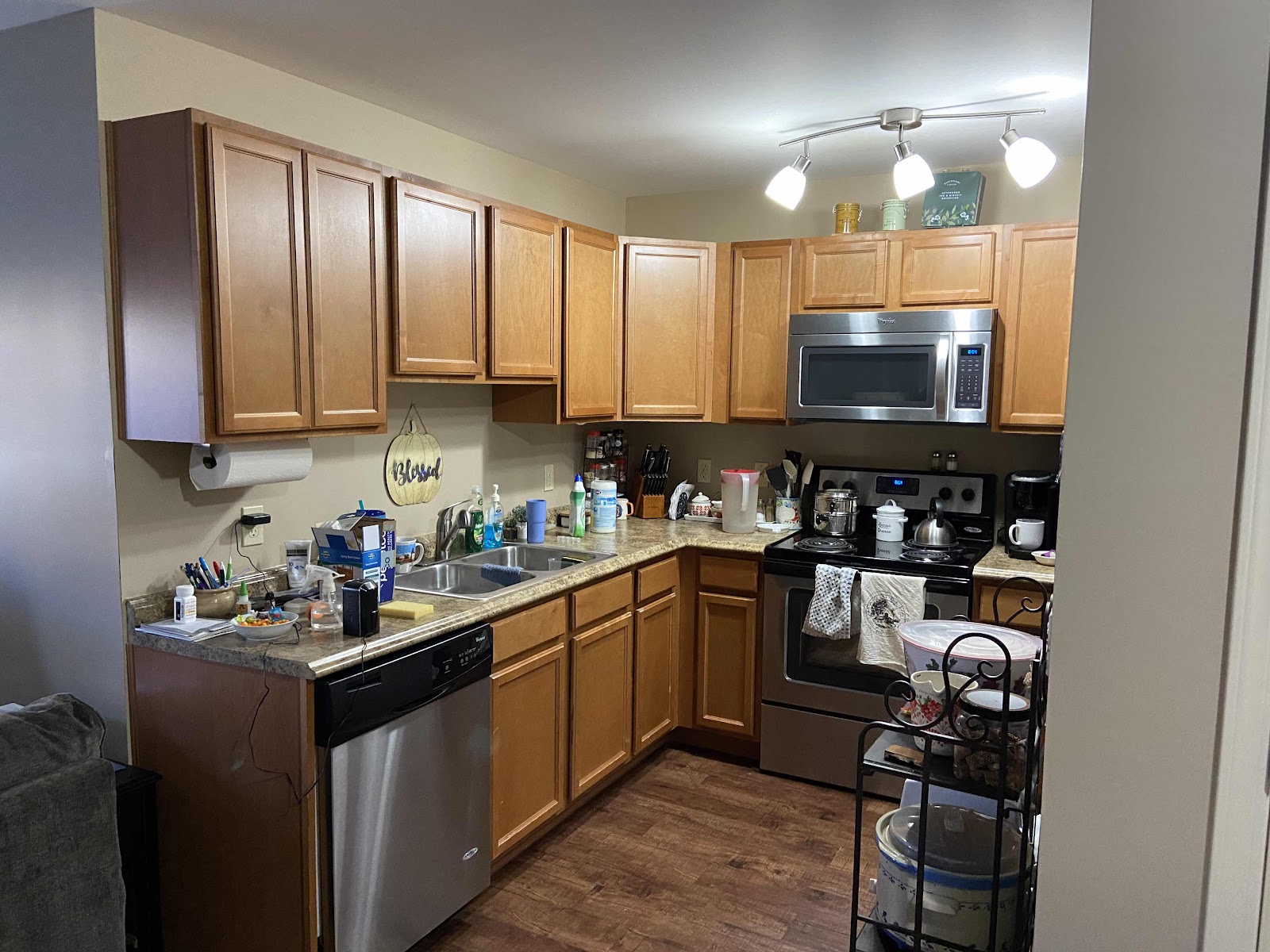 The dining room with the damaged table. It’s not bad though and Dennis think he will be able to fix it fairly easily. 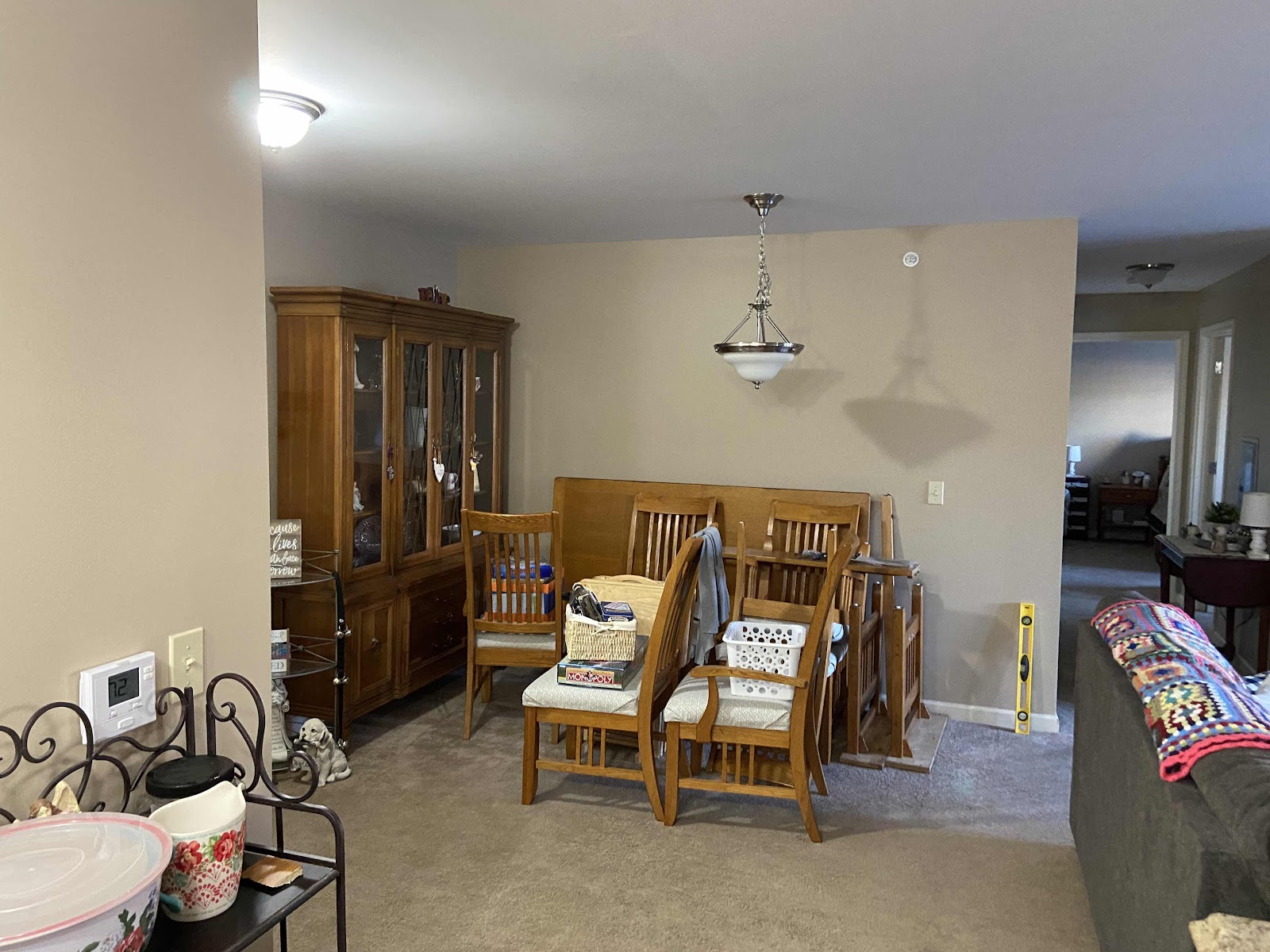 Looking toward the living room. Piper made us a welcome home banner that’s hanging next to the balcony doors. 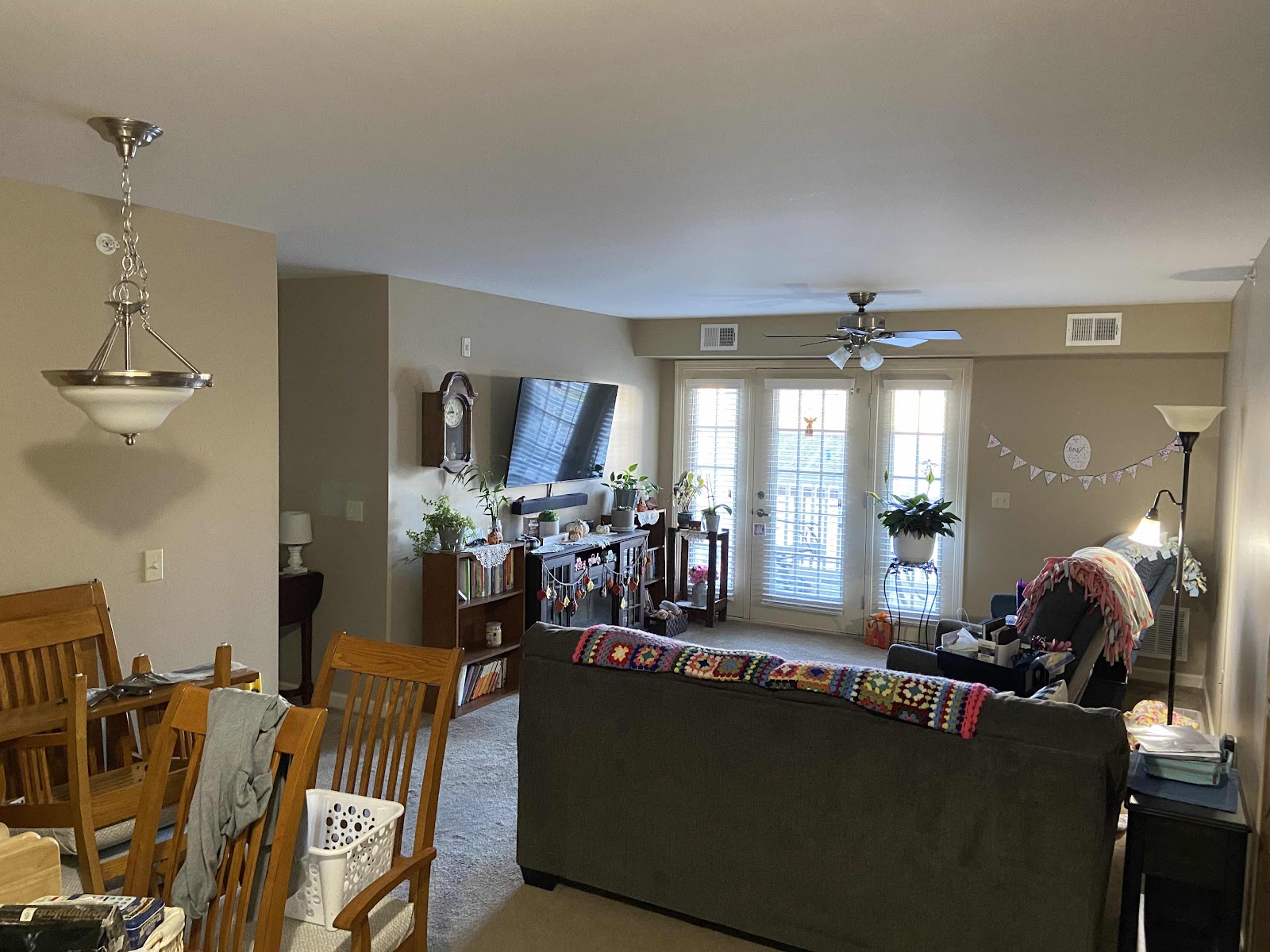 We also have a stackable, full-size washer and dryer in the hall. I love that washer and dryer. It works great!
Tuesday they did a musical at Piper’s school. It had four songs in it and both sets of grandparents were there, along with mom and dad. We all had dinner at Mandy and Brad‘s before we went. Piper is in the back row in the red and black plaid shirt. it was actually very good. She even had a solo.💜 There are so many students in the school they do each grade separately. 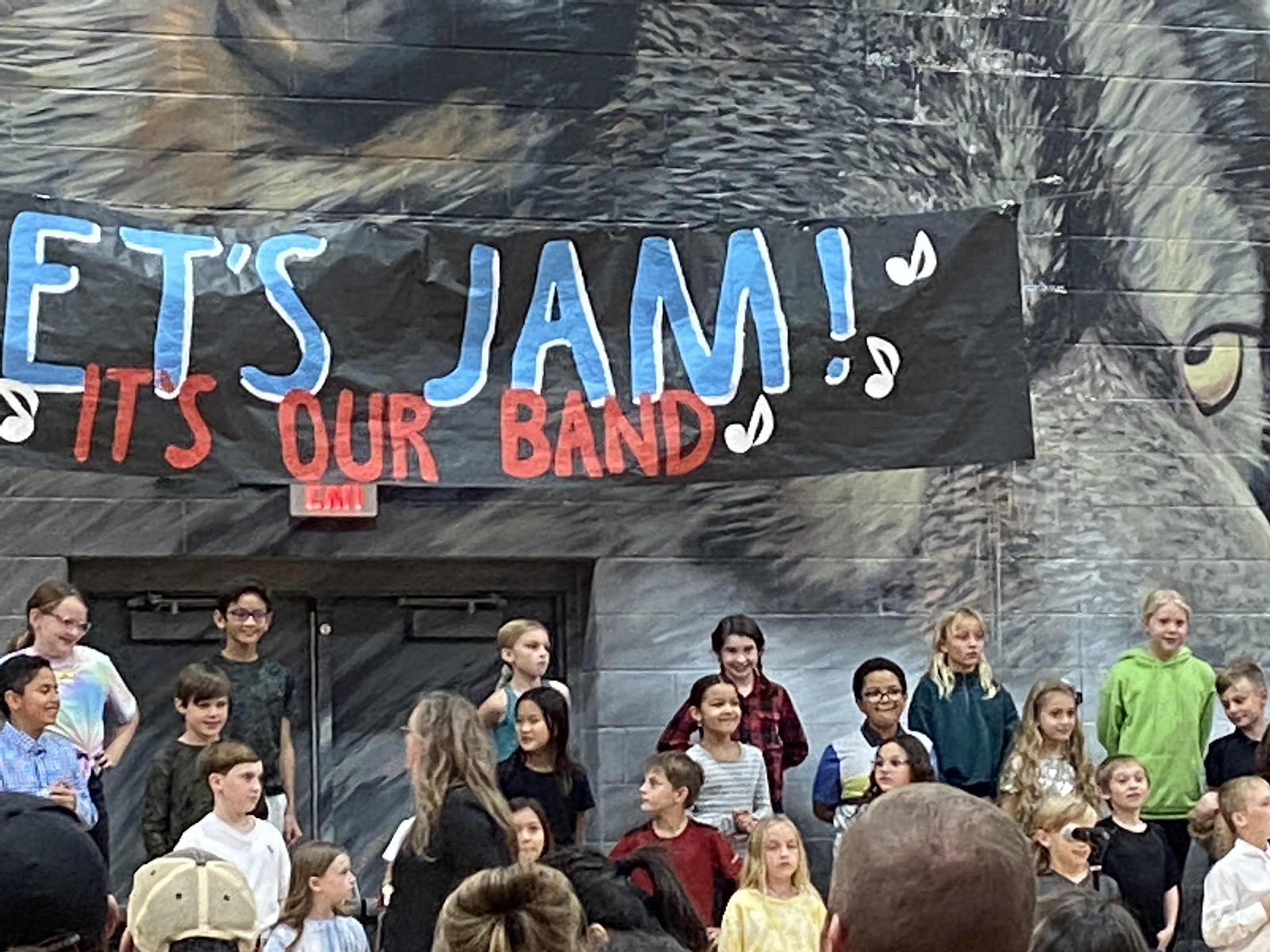 Today was her Halloween Party & Parade at school, so I went up and watched it and walked home with her. It’s so nice to be close enough to do these things with her. She is dressed as Marie Antoinette. 💜 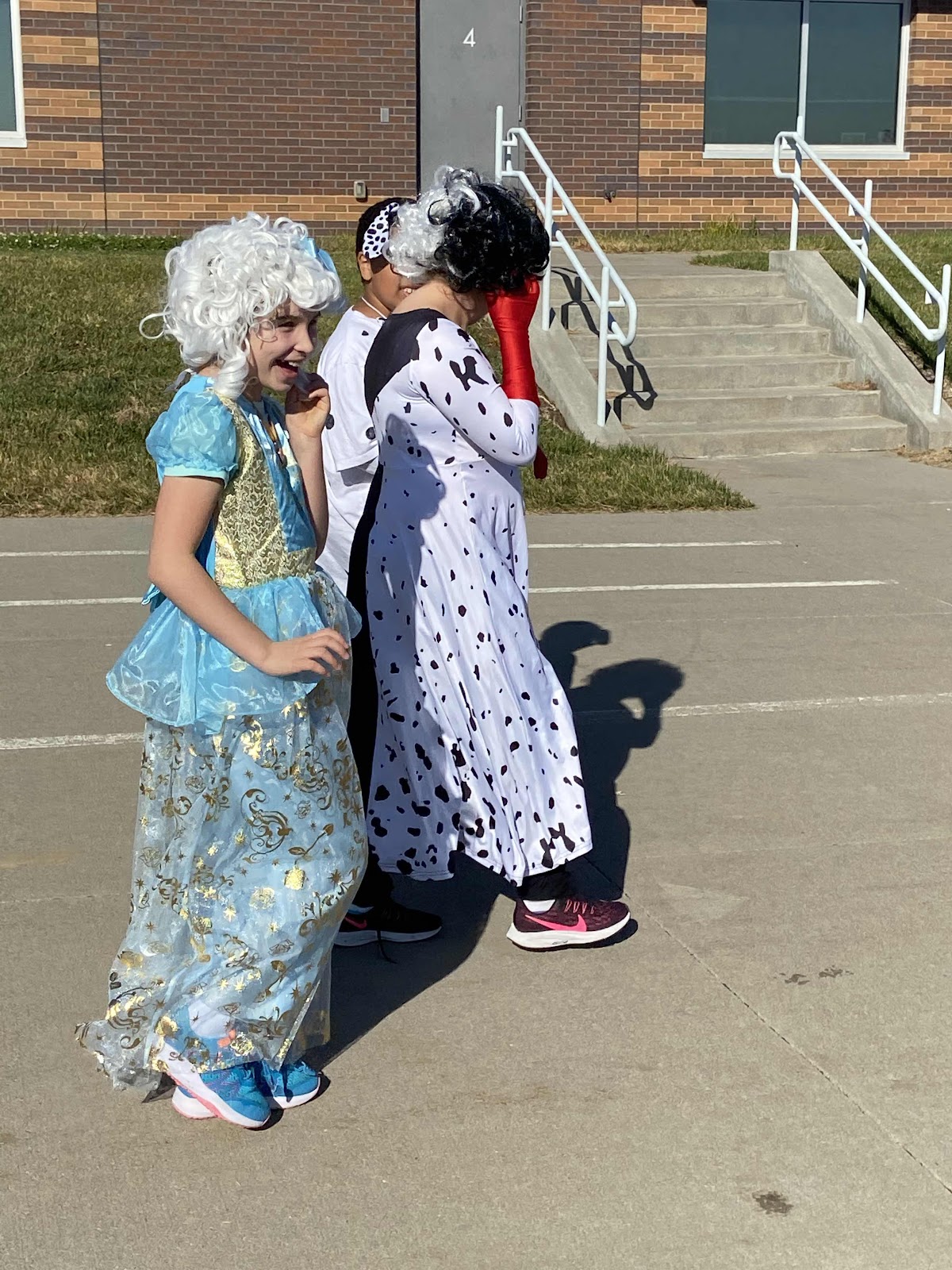 On Wednesday three long, long time girlfriends from church and I went out to lunch and then to the Durham Museum to see the dress exhibit from Downton Abbey. They were original dresses that were worn during the making of the show and movie. It was a lot of fun and we had a great time talking and catching up about things over the years. The first one is my favorite. Would you believe it was made from a tablecloth? 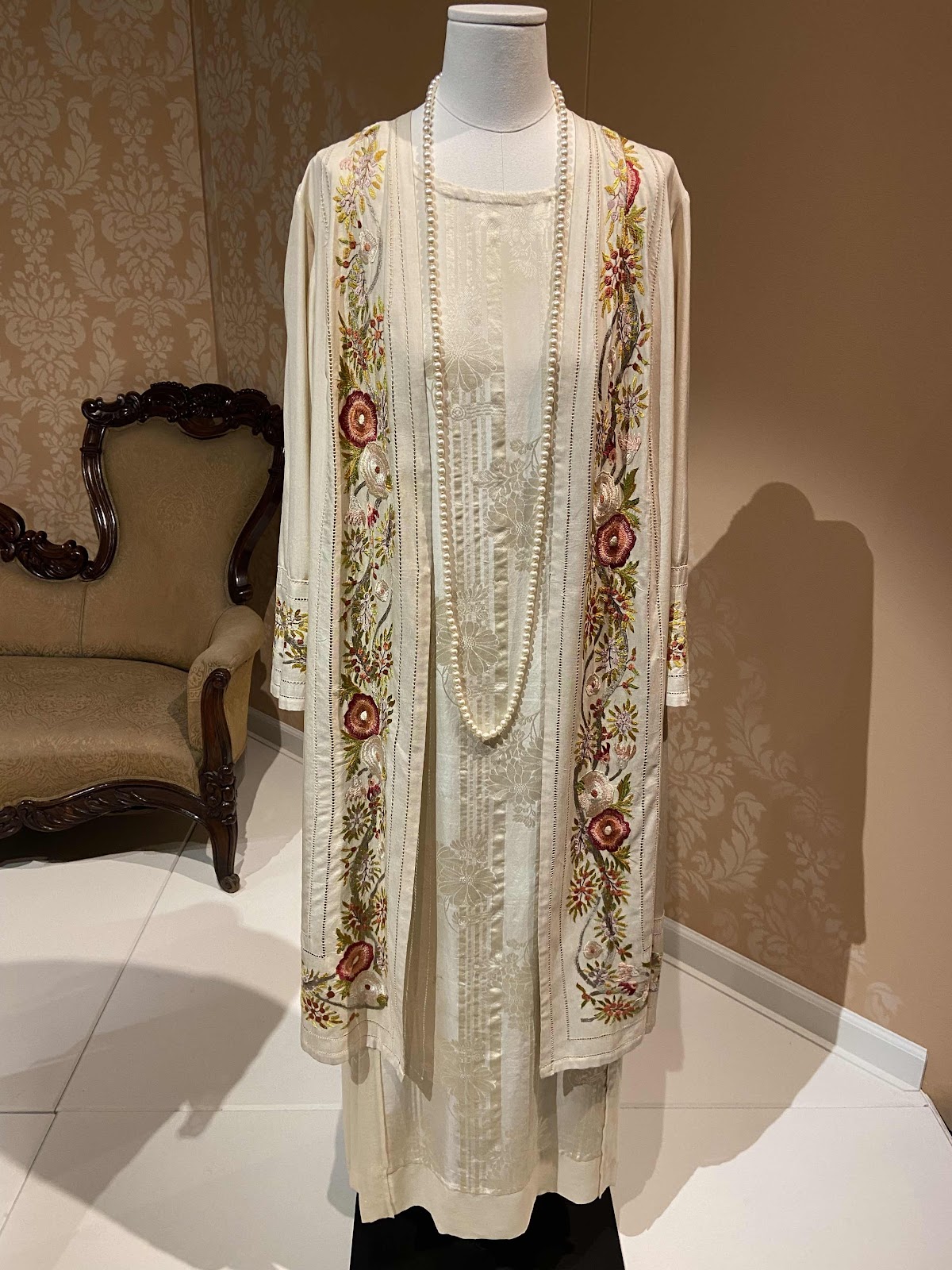 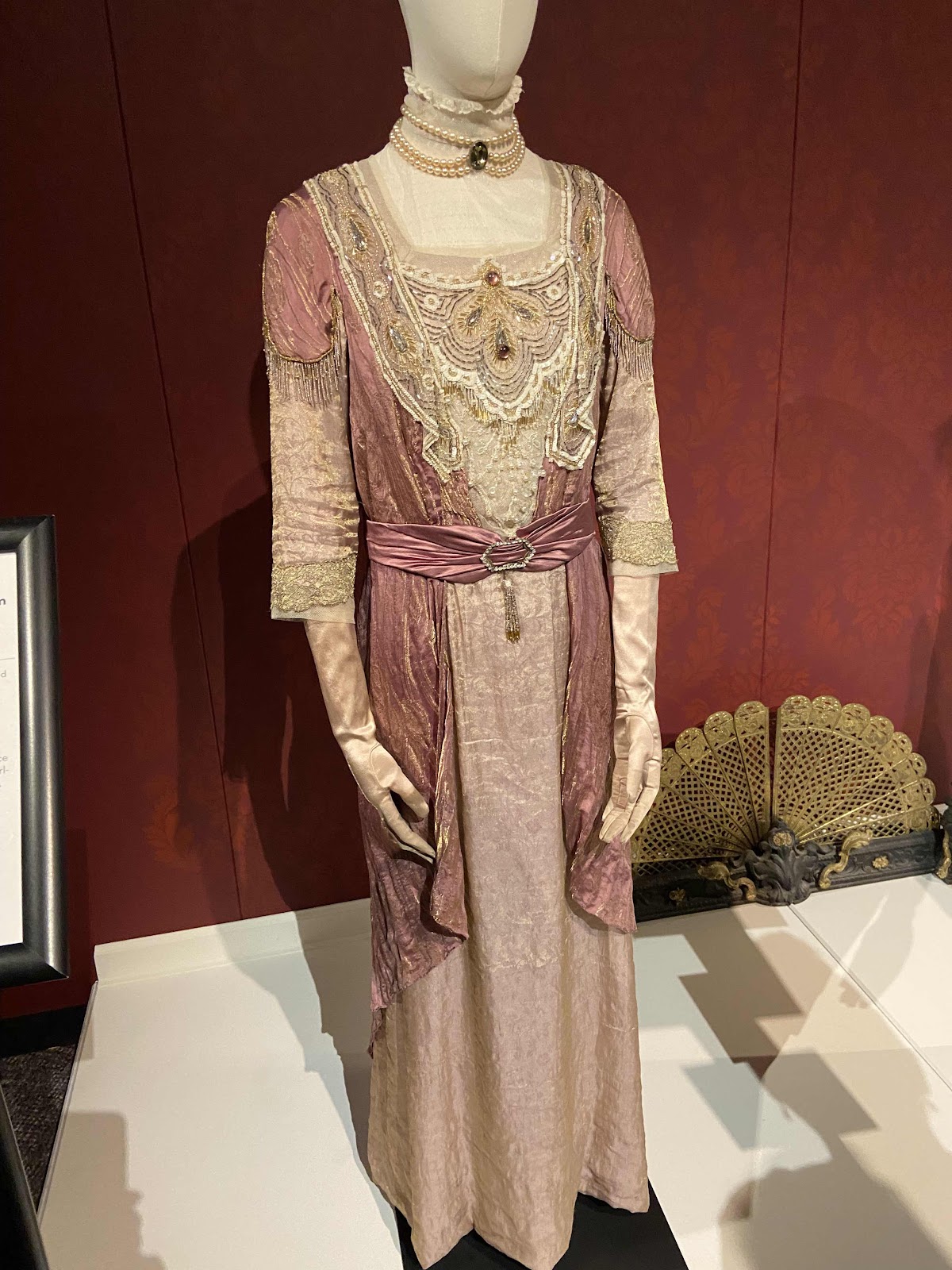 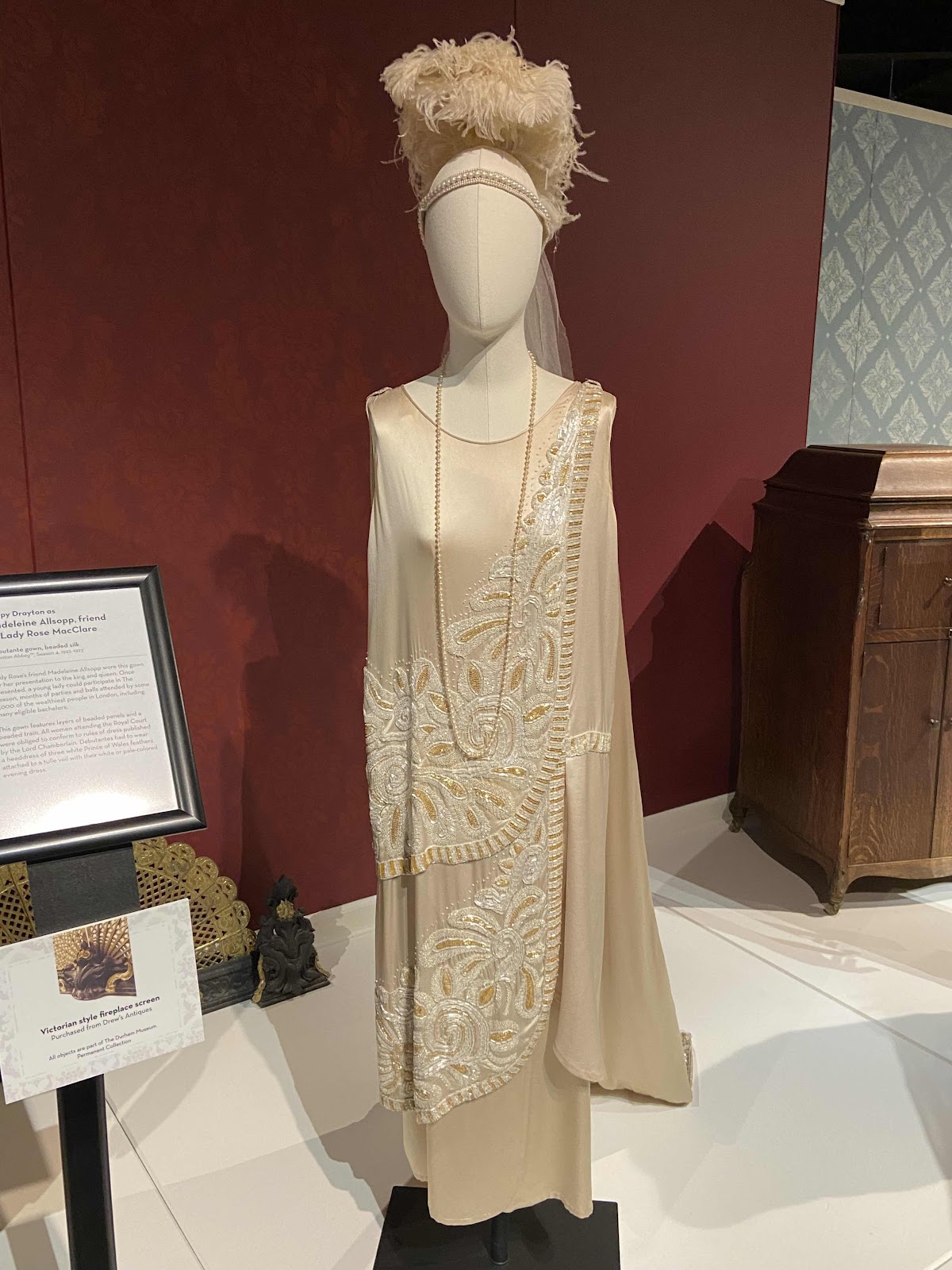 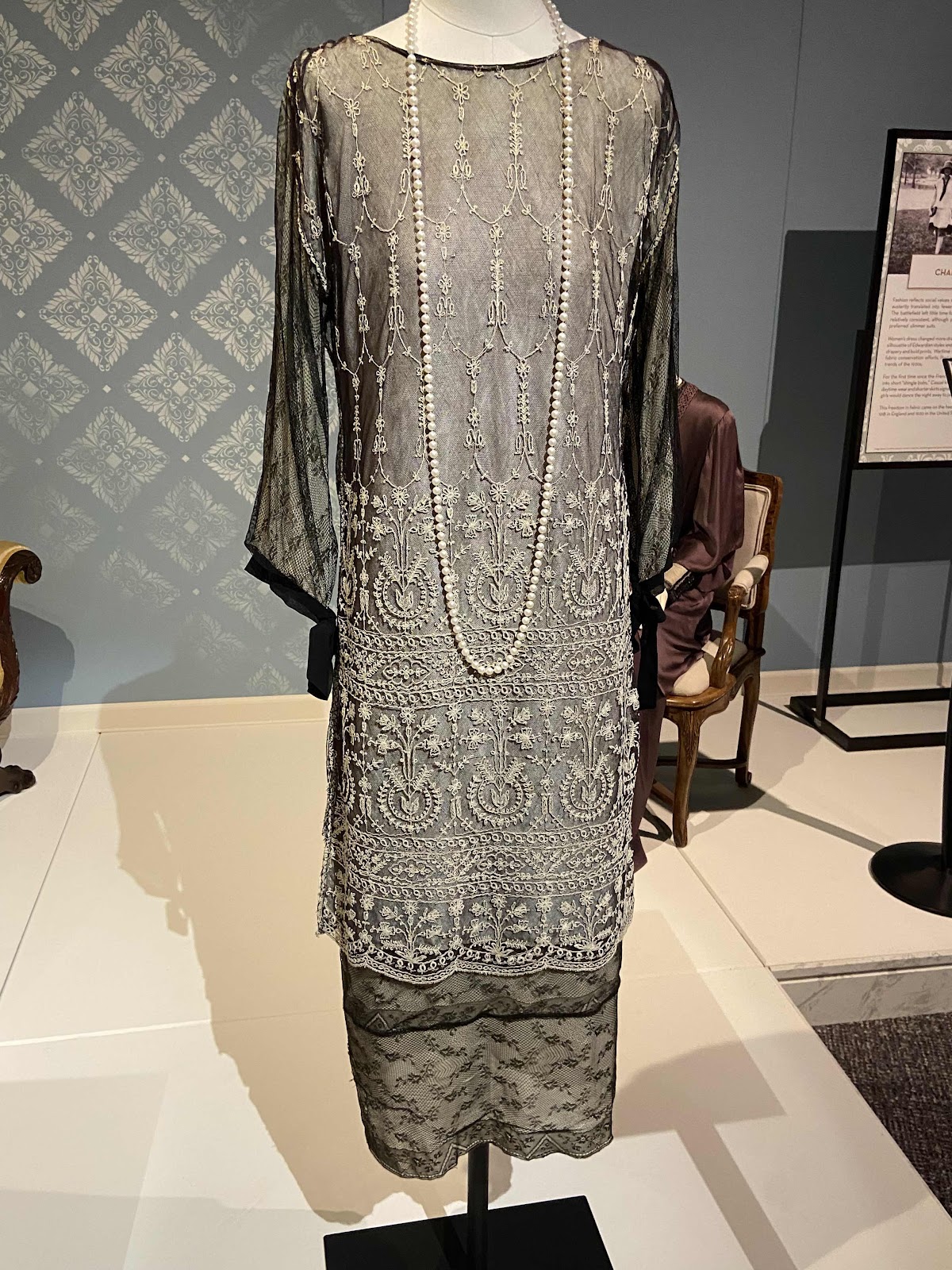 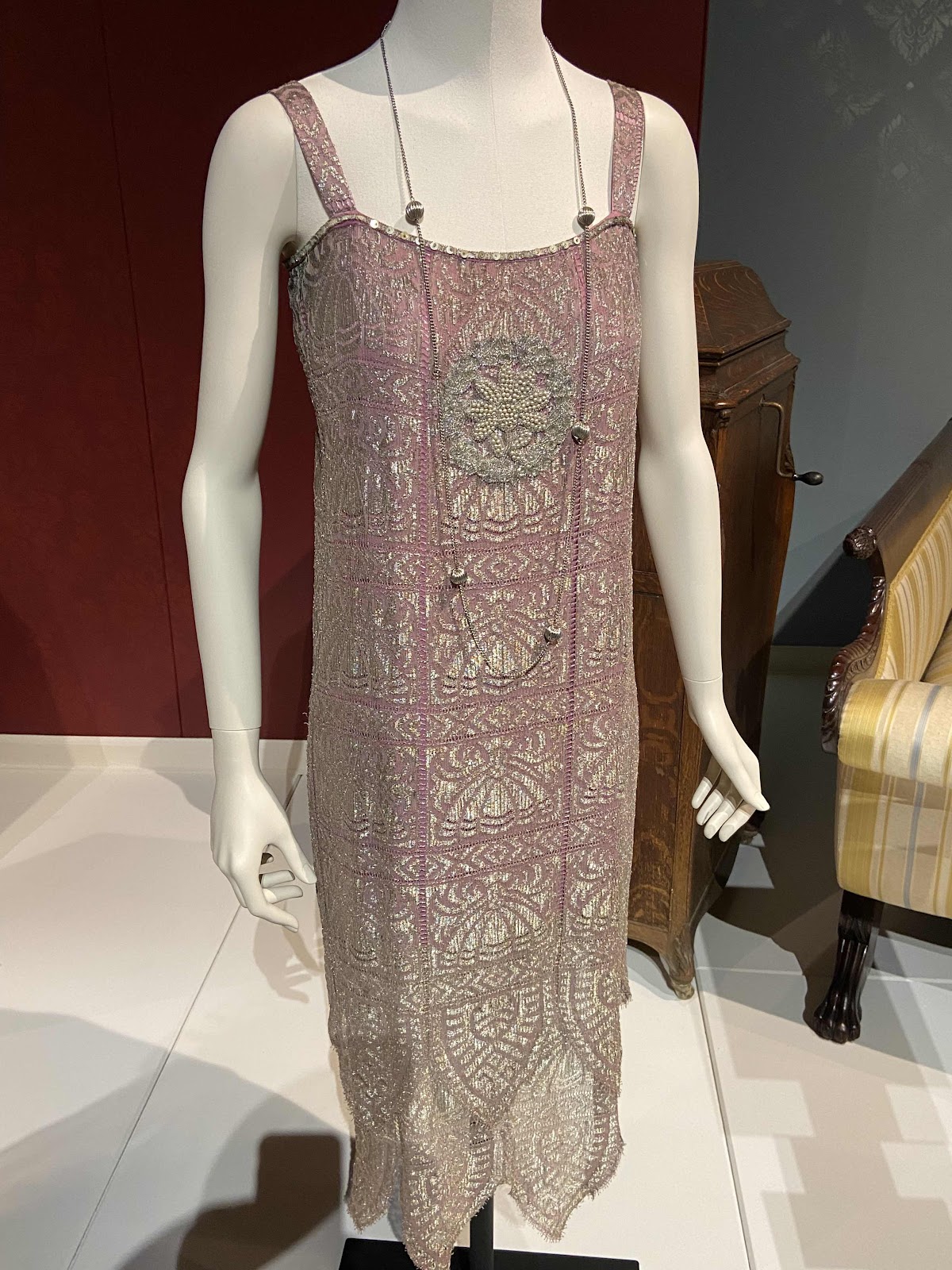 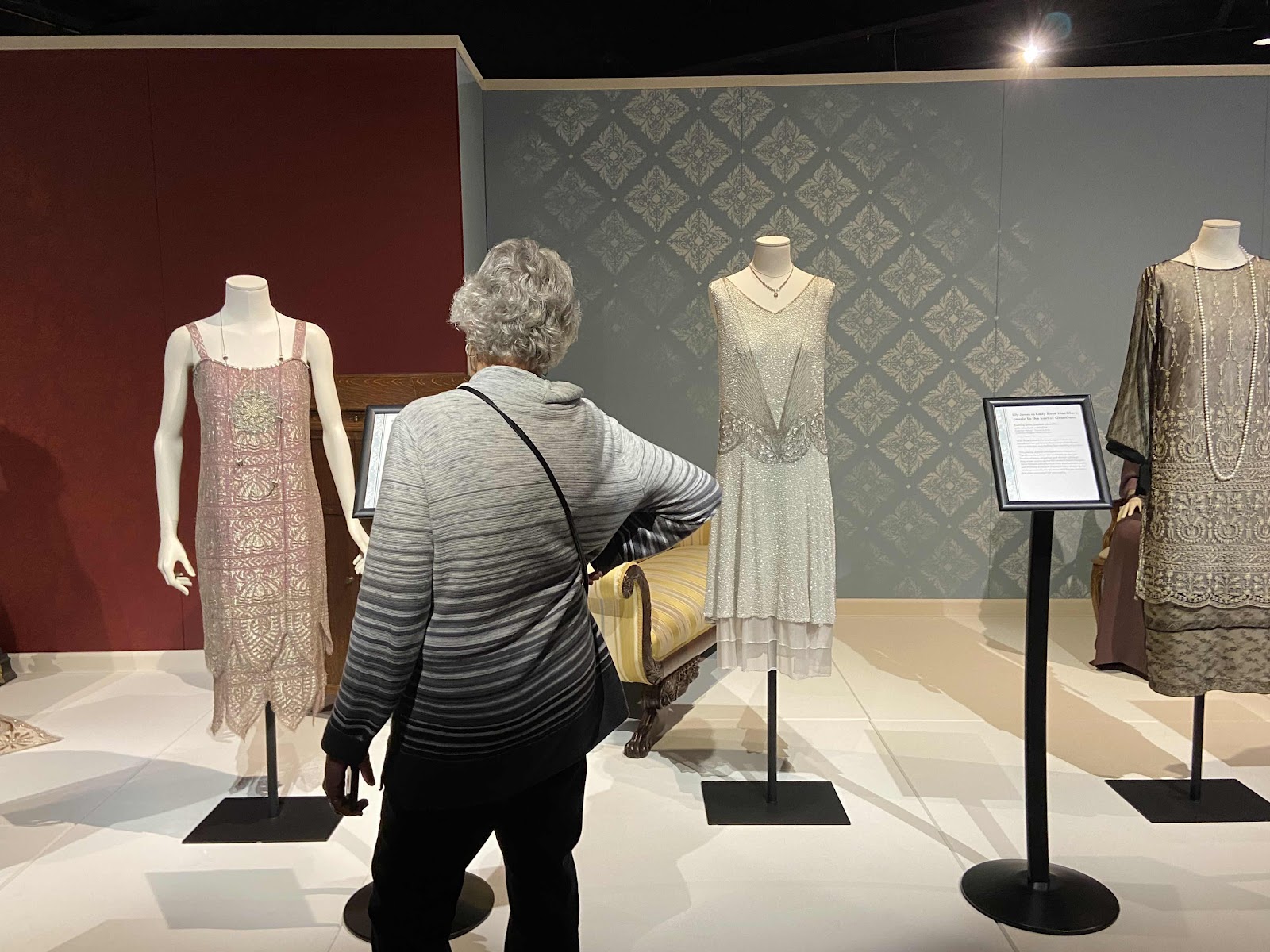 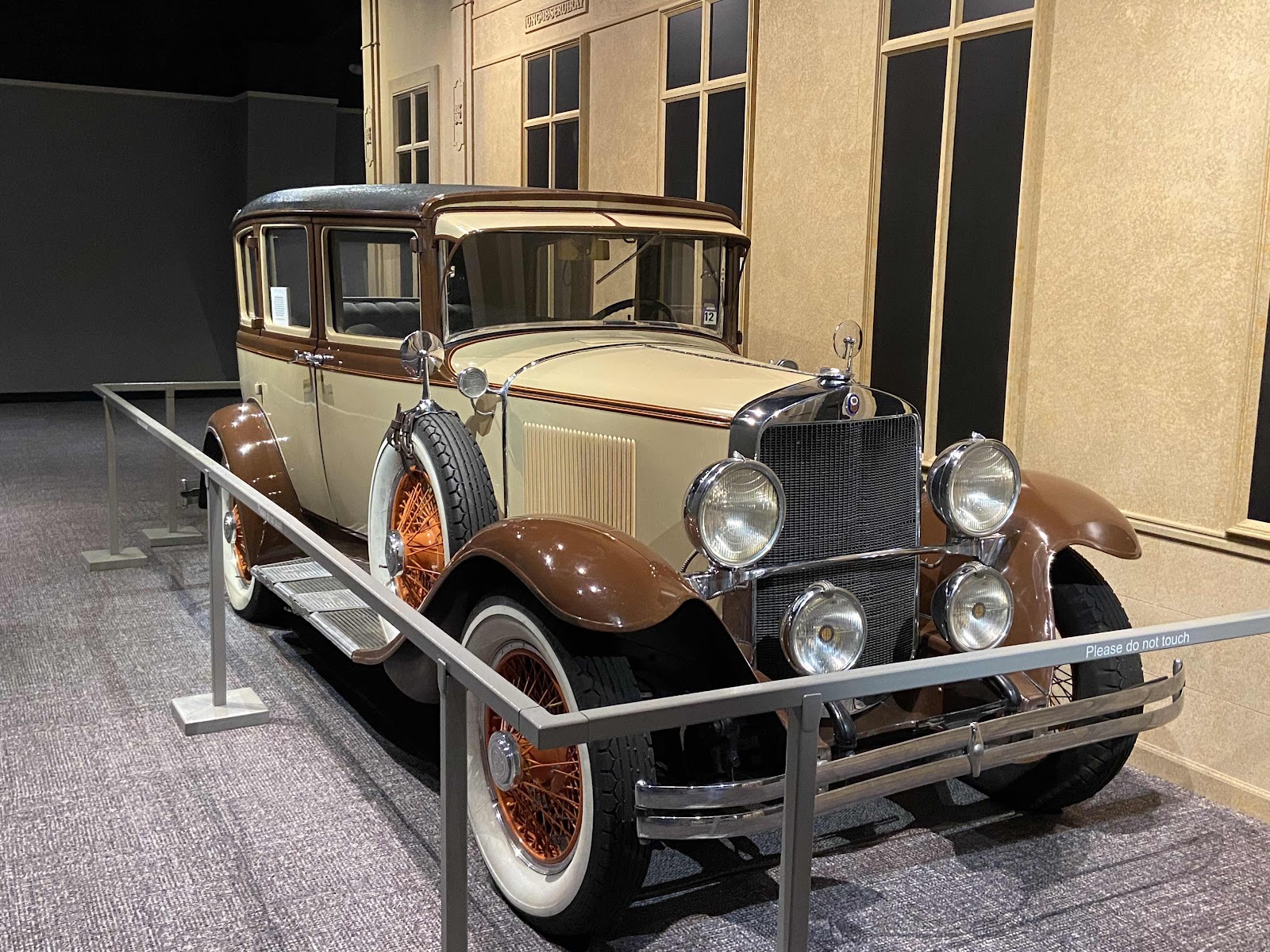 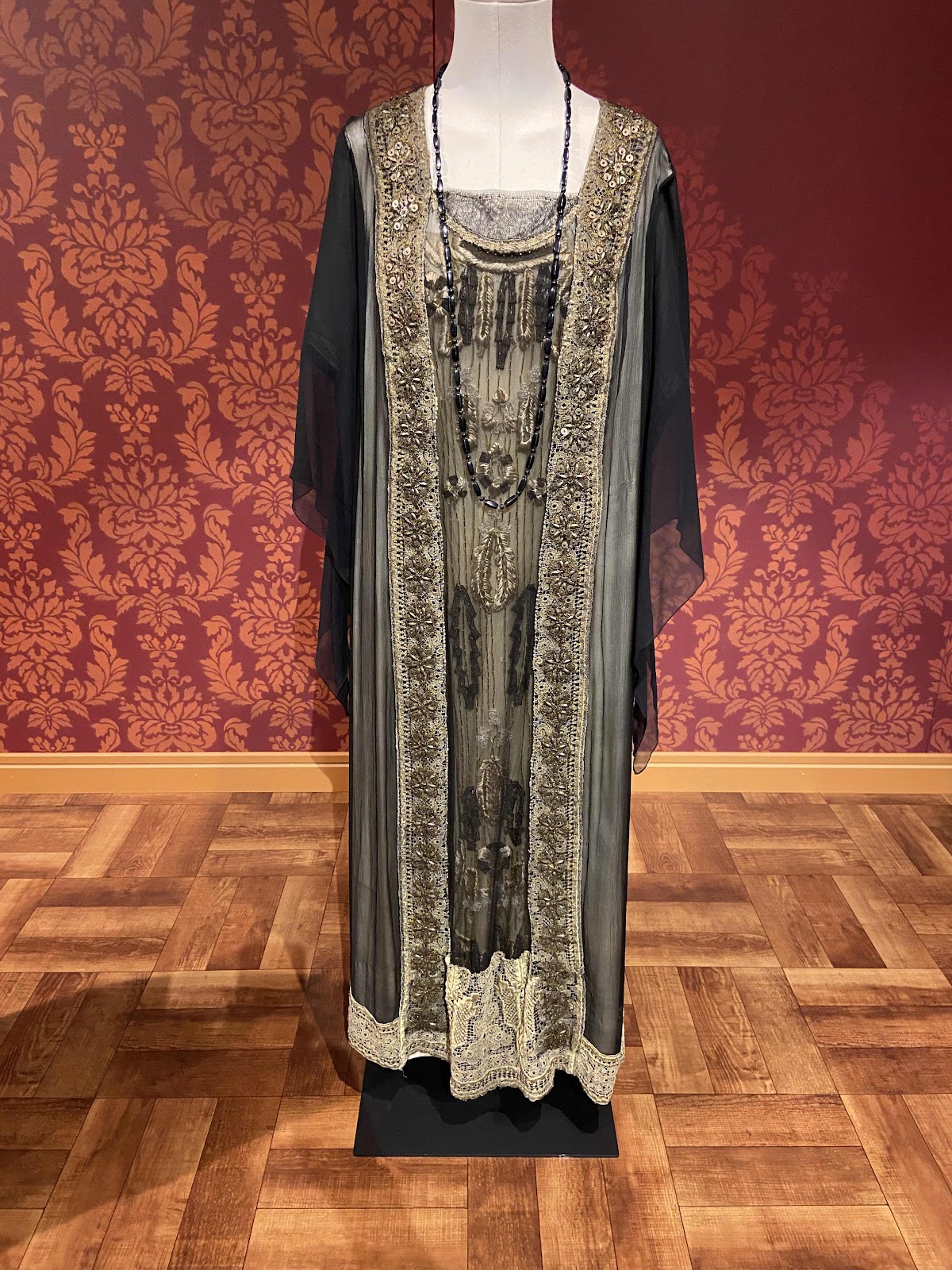 Sorry about so many photos but it’s been awhile and I just love these dresses and wanted to share. I wish we had the same styles now. 💜 I love the loose and flowing look. This makes me want to go back and rewatch all of the shows.
Hopefully I will be back on a regular blogging schedule next week. Not much knitting has been getting done. I’m still making the same toddler sweater that I was two weeks ago, although I now have the back and both right and left fronts done. I have just started one sleeve. It has never taken me this long, even to knit an adult size sweater.
The mittens are in the car to take to the school to donate. I’ll try to get that done next week sometime. With everything happening this year, I didn’t get quite as many done. There are 73 pair of mittens and nine hats. 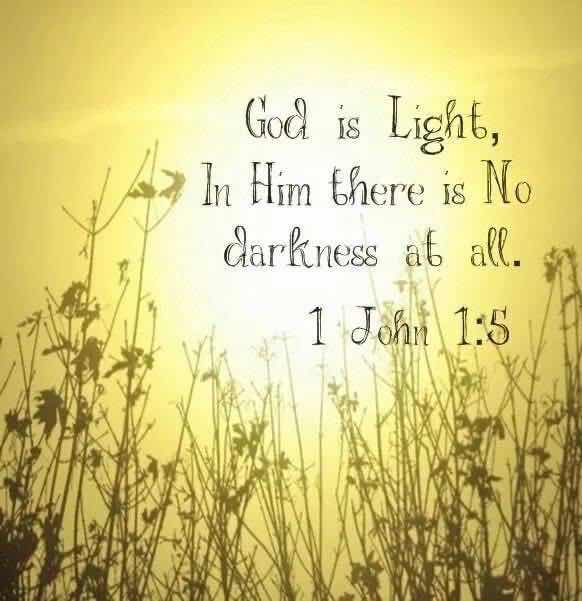