Good morning my friends! Once again it’s been a while since I’ve visited you. I’m going to try very diligently to get back into the swing of visiting all of your blogs again. My hope is that life will start slowing down a bit now. We had planned to go camping for the last time today and come back on Friday. We were going to spend the time winterizing and cleaning out the camper before we left the campground. However, the winds are predicted to be in excess of 40 miles an hour for the next three days. Pulling a camper on the interstate in conditions like that is not fun at all. Plus we knew we would just be sitting inside the trailer and not be able to be outside much with winds that high. We did have about 2 1/2 hours of a nice gentle rain during the night last night with lots of thunder and lightning and today is much, much cooler. Yesterday we spent most of the day working on the camper and got home just in time to shower and change then go to Chaela and Tim‘s 10th anniversary dinner in the Old Market. Tim planned it all as a surprise for Chaela and it was a wonderful evening. We haven’t been to the Old Market area of Omaha in over 30 years, since before we moved to Spokane. It’s a very touristy part of town, close to the Missouri River with lots of restaurants and little shops. We did have a fun time and the food was delicious too. I had my favorite, fettuccine alfredo with grilled chicken. It is a diet food right? Ha ha!
I thought I would share Lizzie‘s Halloween costume with all of you. Any guesses as to who she is? Well, of course she is Marie Antoinnette! 😂 Piper is also going to be Marie Antoinnette. She just finished reading her biography and feels that she was just a very misunderstood lady! Her words, not mine. 😍 Piper’s costume is really sweet and I’ll have to get a picture of her in it too.  But Lizzies cracks me up. She is the most patient and long-suffering puppy. Zoey is just trying to figure out what’s going on with her. 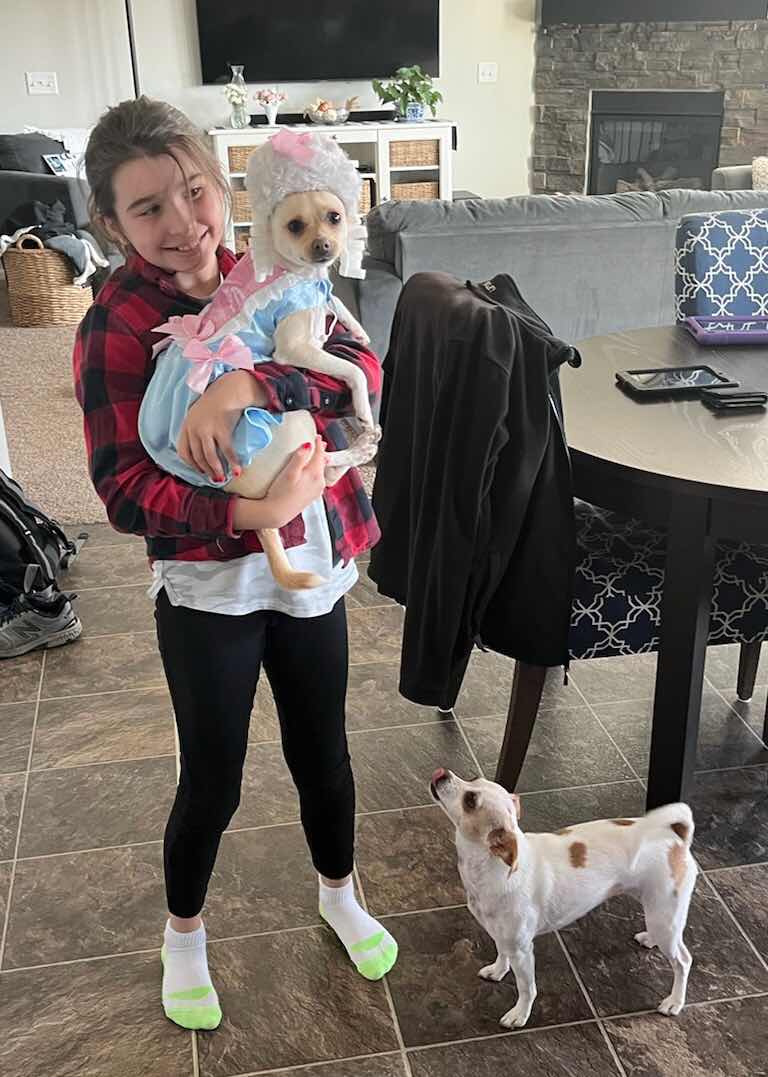 At Mandy’s church on Sunday they had this cute little area for people to get their photos taken. Aren’t these both great pictures of Piper? 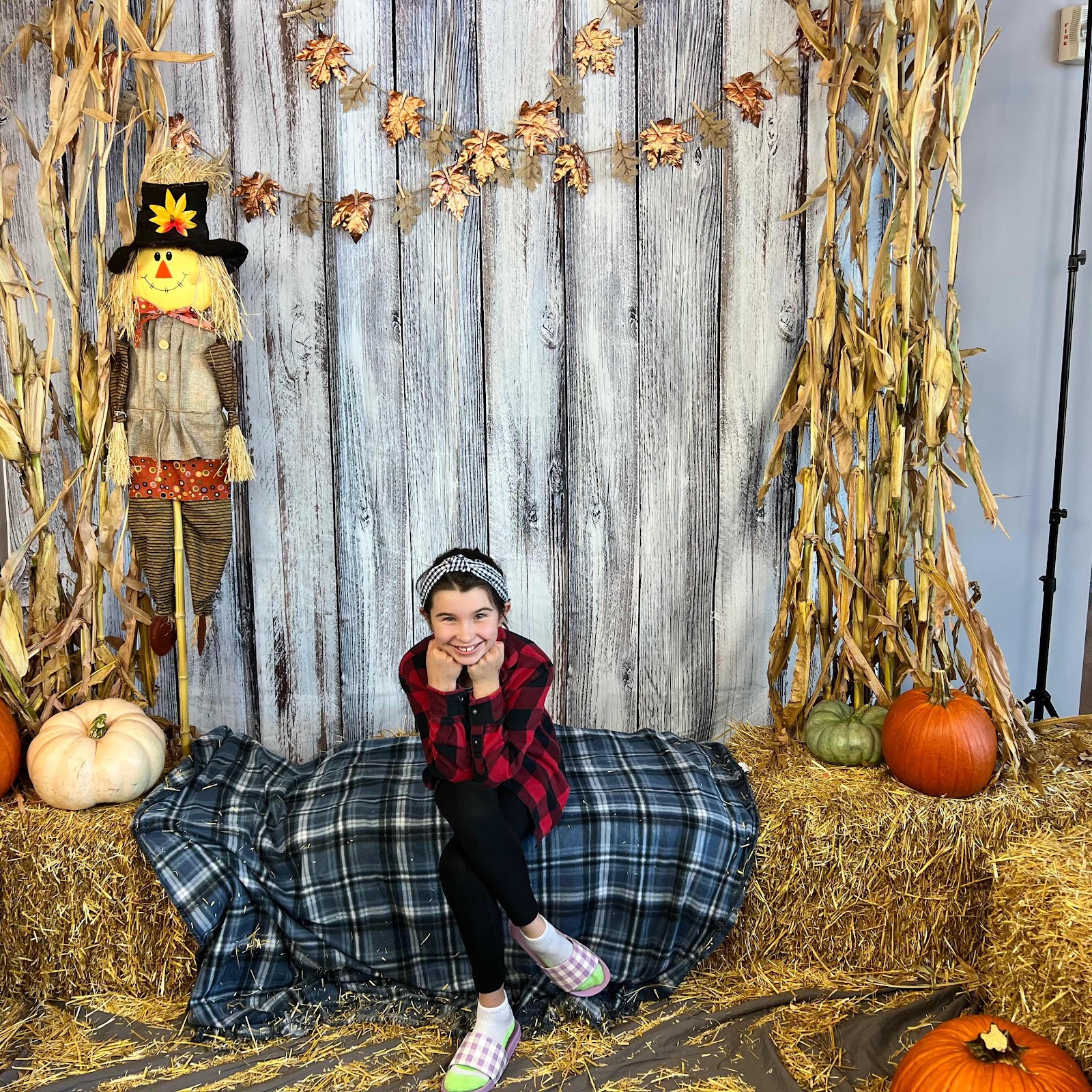 She has the most beautiful smile. I’m not exactly an impartial Grandma am I? 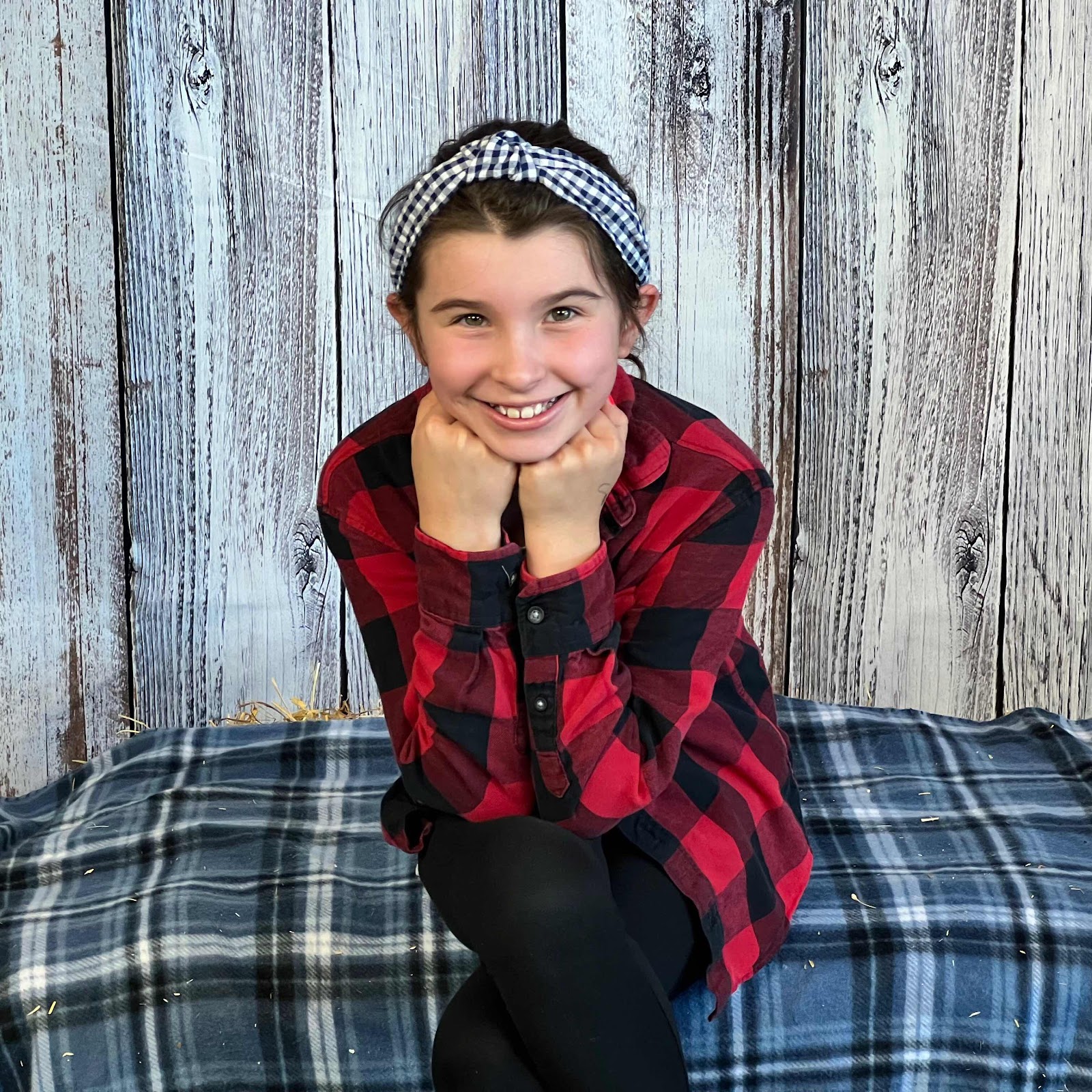 I took this photo of the tree across the street at Dennis’s cousins house this morning. The sky is such a gorgeous blue today after the rain, thunder and lightning last night. Leaves are changing all over the neighborhood. 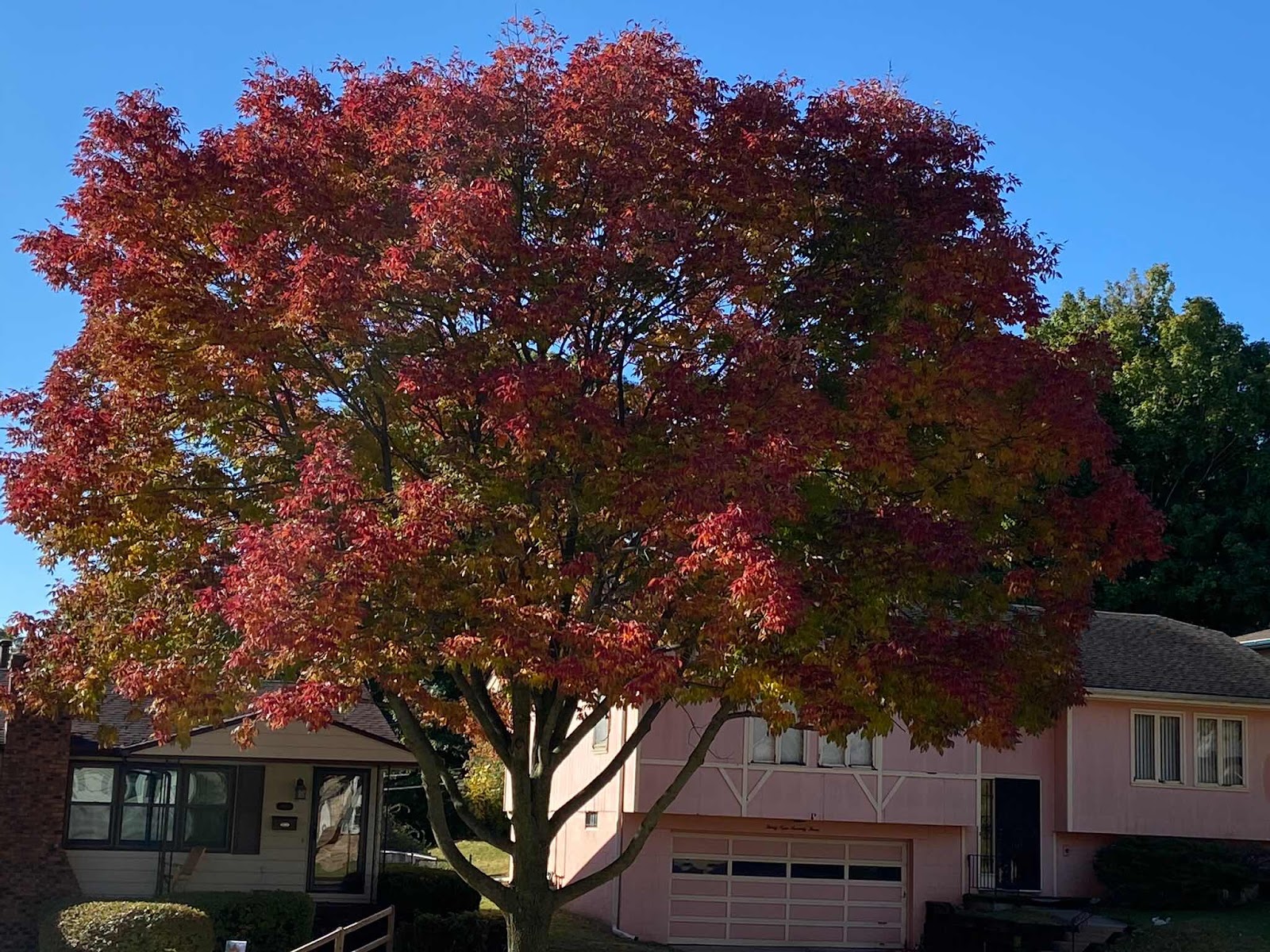 This one was taken as we were leaving the campground last week. Zoey loves to ride as a copilot in both the truck and the car, but I truly believe she prefers the truck. She sits up higher in her little dog car seat and can see everything. She doesn’t miss a thing. Lizzie tends to lay down and sleep when she rides in the car with us, but not Zoey. She doesn’t want to miss anything. If you all remember, she was supposed to be my dog. Nope. She is a Daddy’s girl. Not that she doesn’t love me and she sits on my lap a lot, but if it came down to a choice between the two of us, it would be him every time. Lizzie is the same way with Brad. These two guys are hilarious with these dogs. Neither of them really wanted them and they both preferred bigger dogs, but these girls can get them to do anything now. 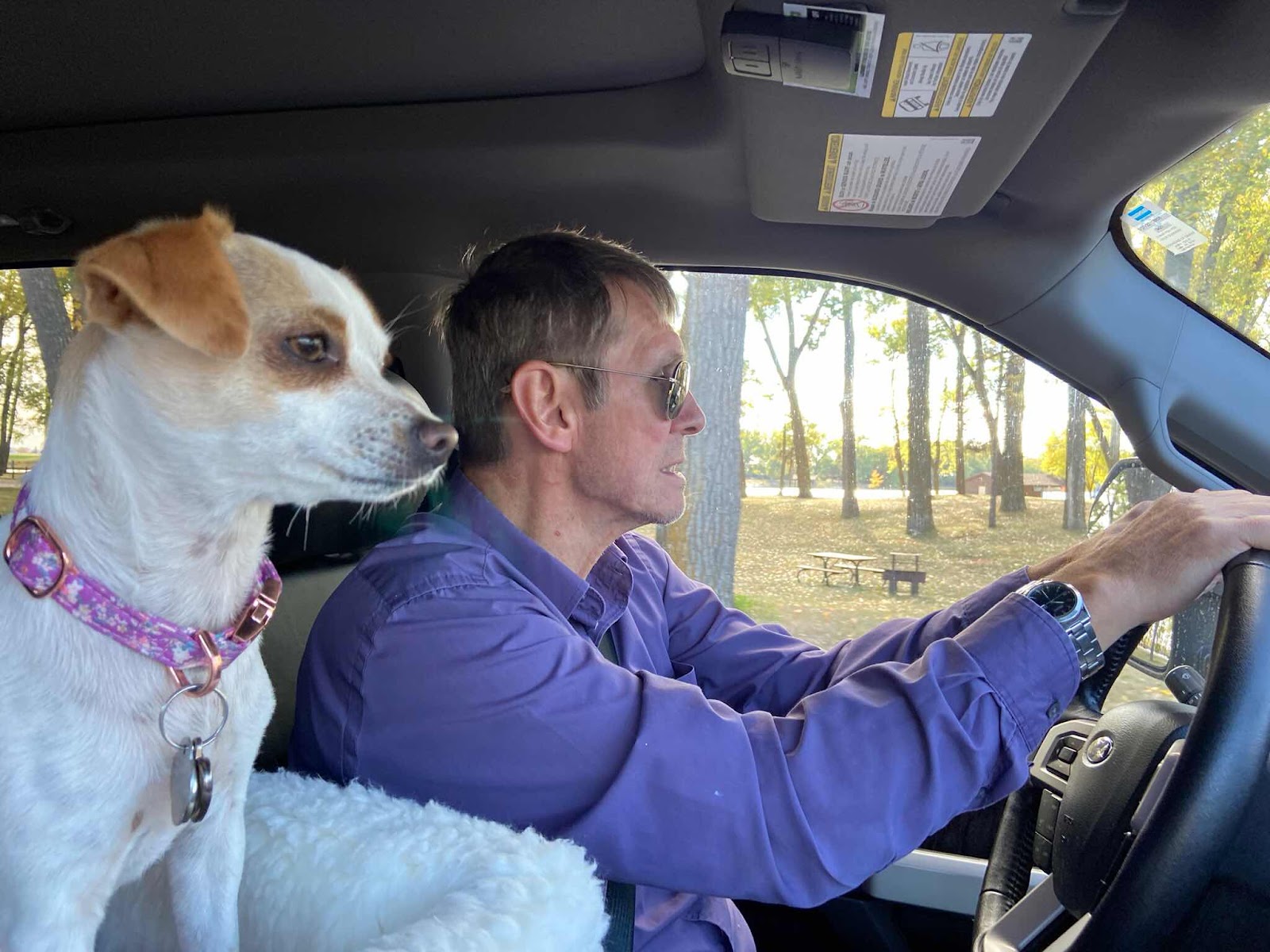 And who wouldn’t do anything for the two of them? They are the cutest little girls.💜 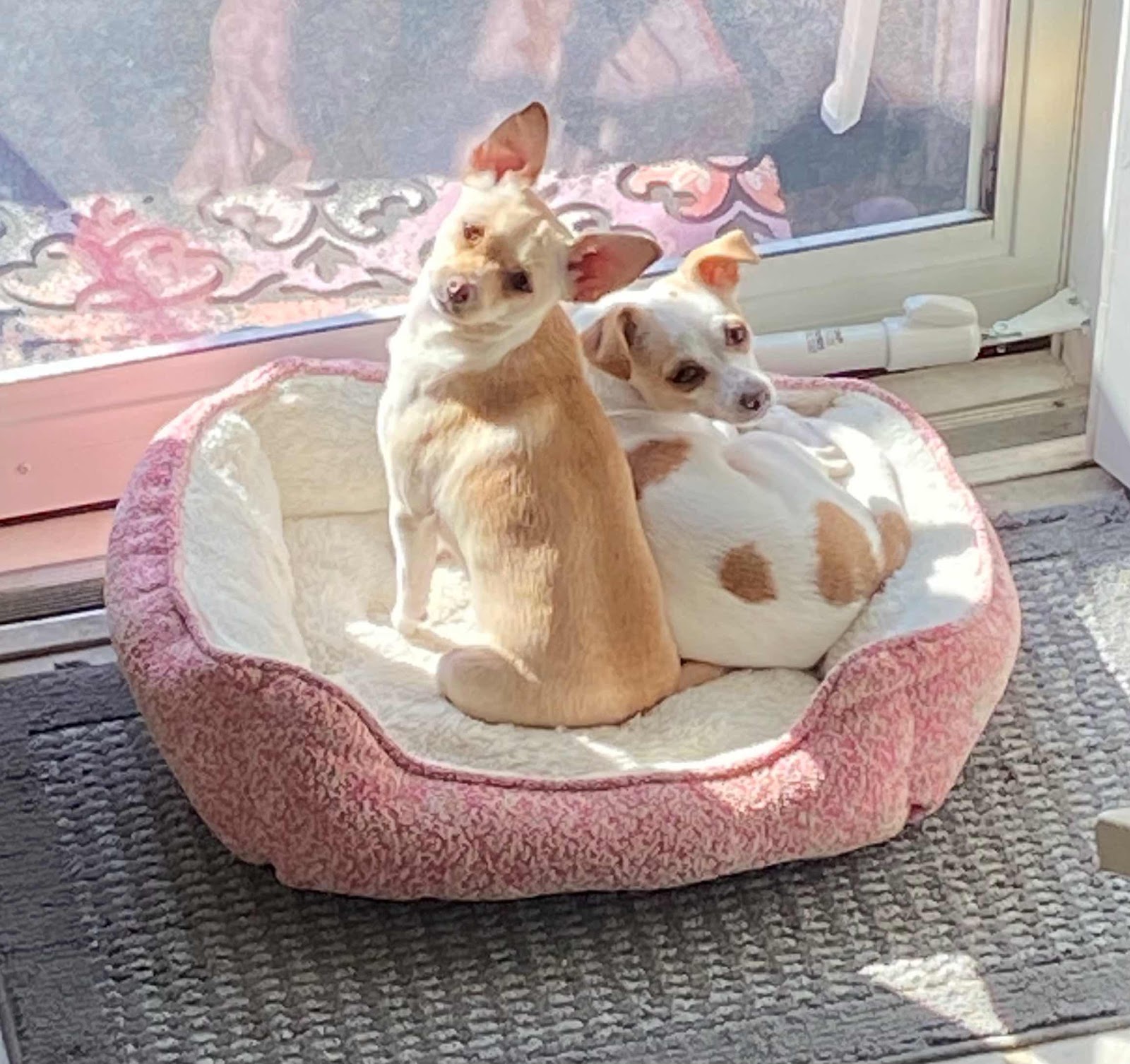 I hope I don’t offend anyone with this following photo. I saw it on Facebook and just cracked up. It’s true. Isn’t this what we all want to do? It may be knitting instead of crochet, or even cross stitch or quilting, but the idea is the same.😂🤣😂 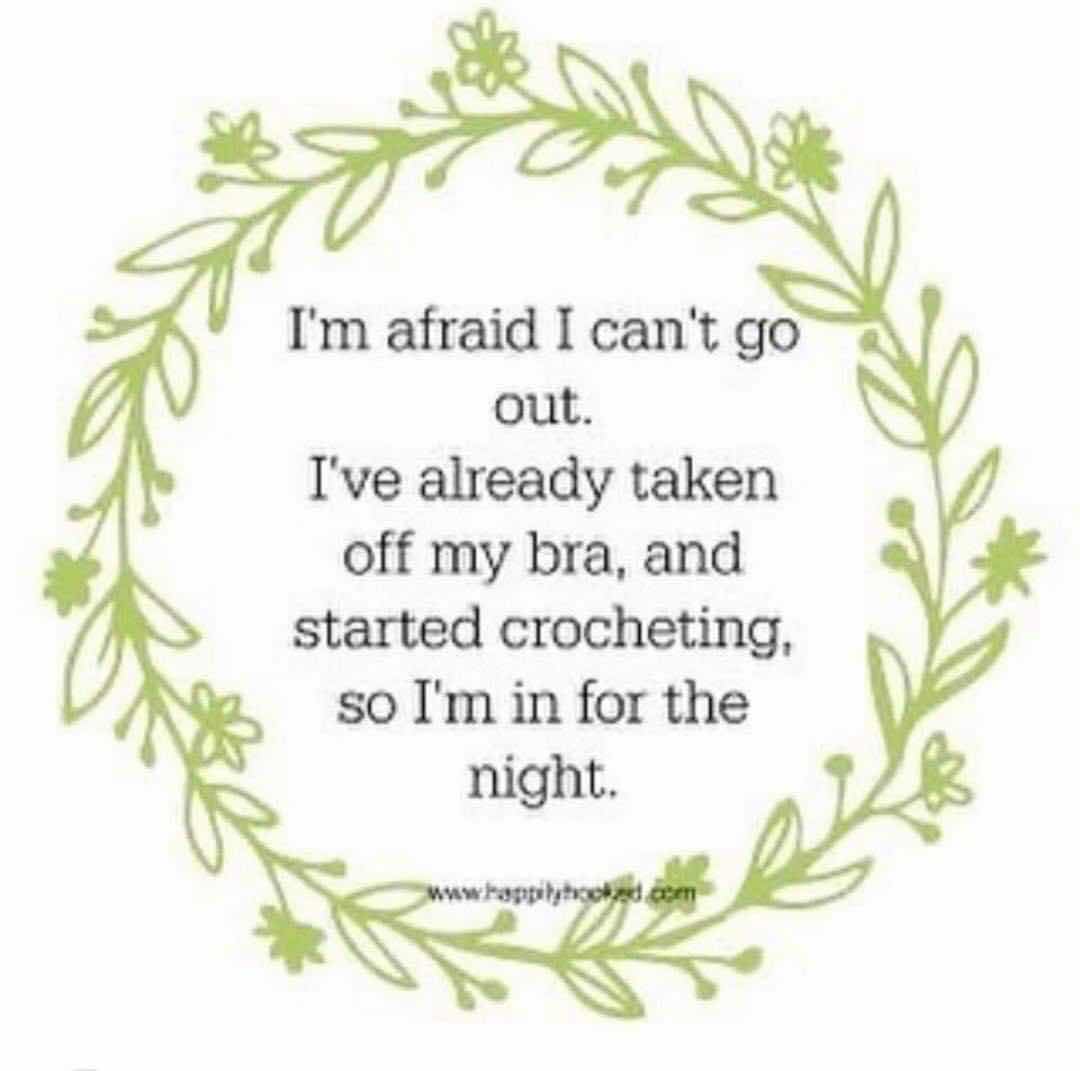 I do have a couple of things to share with you. First of all I finished another pair of socks but I can’t show them here. They are a Christmas present as you can guess. These two are gifts also but the recipients won’t be looking at my blog. One of these sweaters is for baby J in London and the other one is for her cousin who was born just three months later, but wears the same size clothes! They only live a couple of blocks from each other and are together a lot. I thought it would be cute for them to have matching sweaters. I just finished the second one late last night so they haven’t been blocked and I still have to get buttons for them. Today I’m starting a sweater for baby H’s older brother who wears size 4. I thought it would be nice to give them new sweaters for Christmas too. 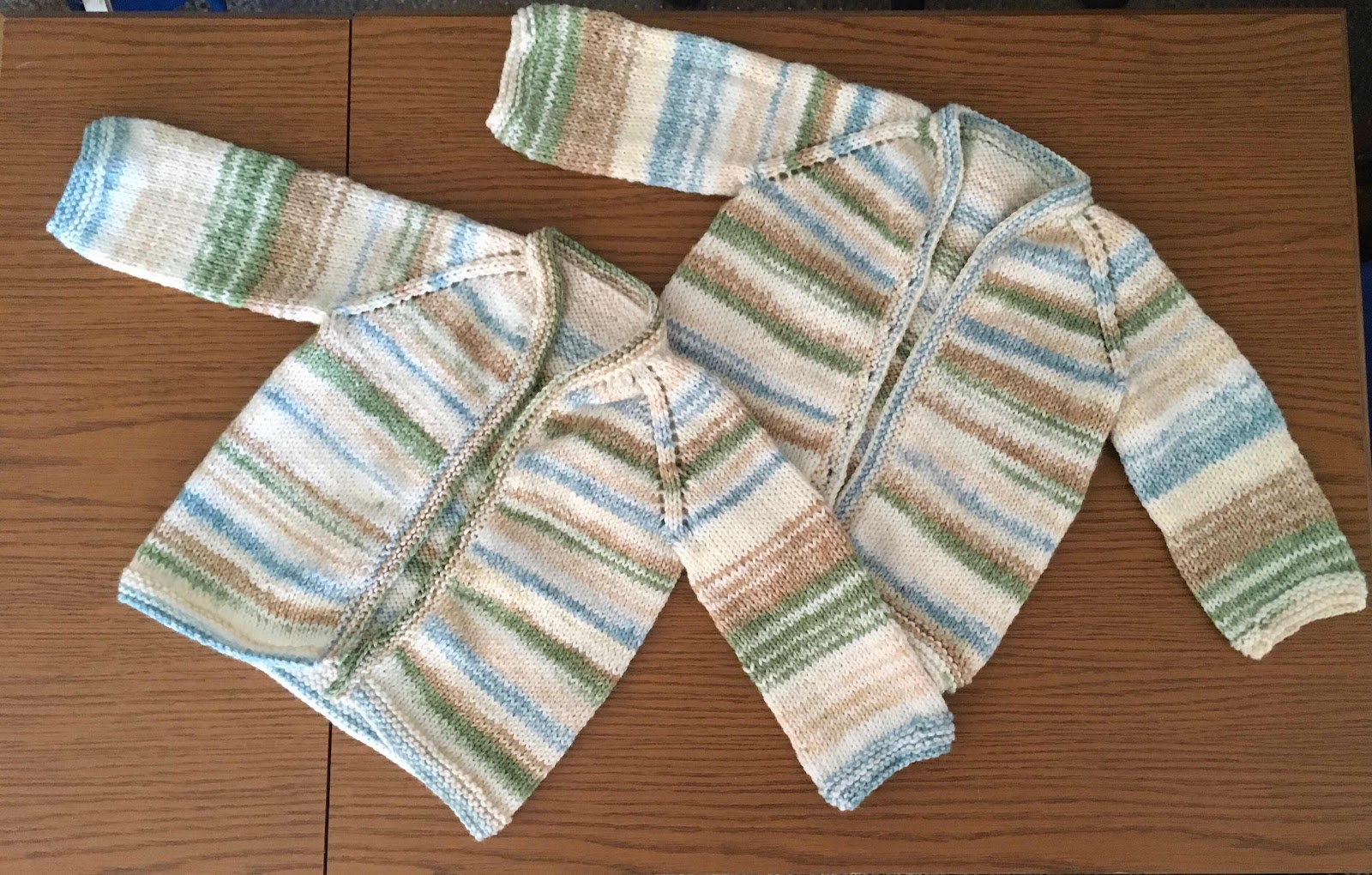 I usually have a dish cloth on the needles and I just came to realize that my gift stock is almost completely depleted. So I cast this one on this morning and before I start the new sweater I’ll finish the dish cloth. I will try to keep one on the needles until I have another basket full for gifts. I really like this color. It is Hobby Lobby’s “I love this cotton” in the periwinkle colorway. 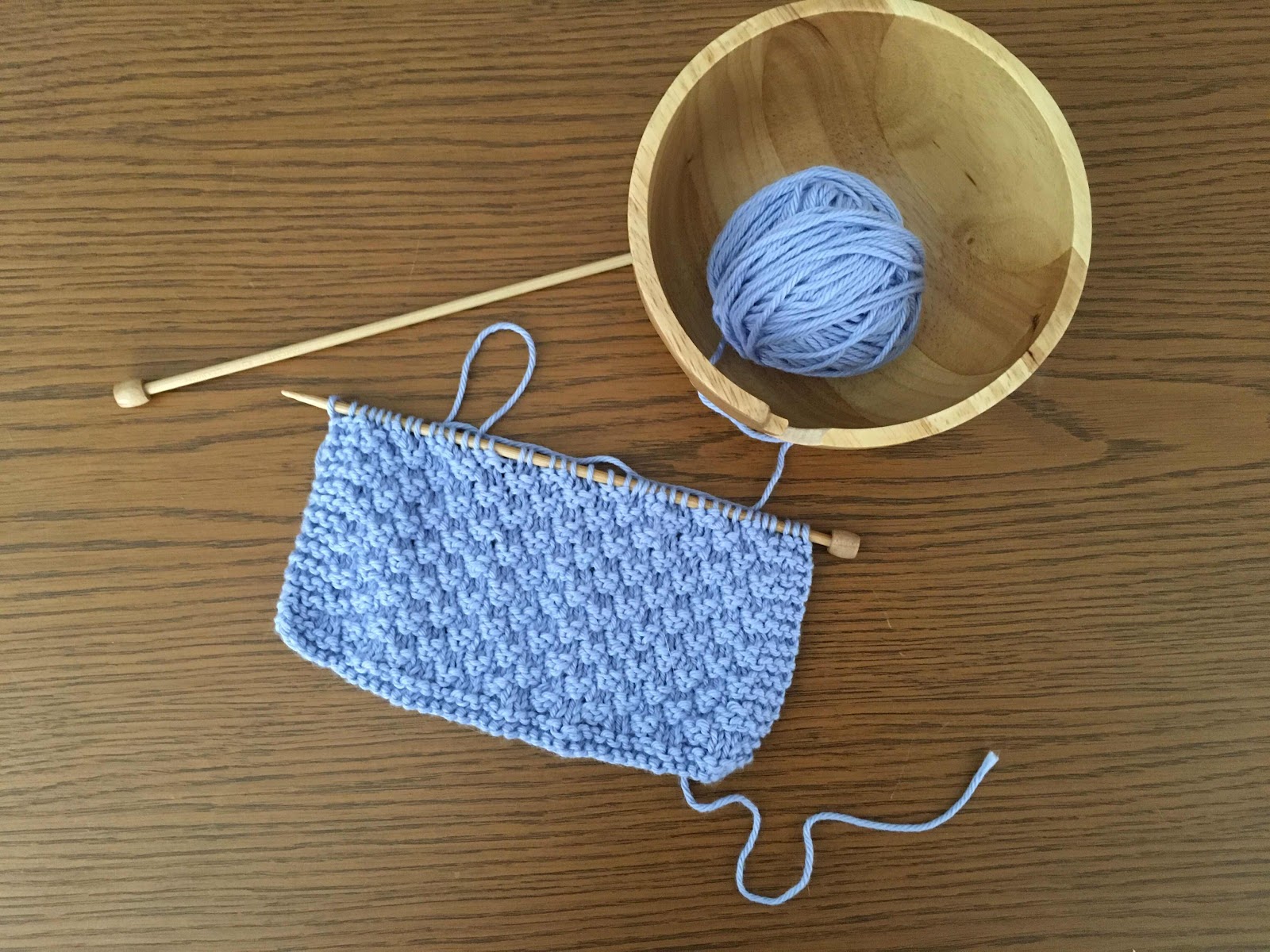 I also need to make another pair of socks because I miscalculated how many I had finished. I need one more pair for Christmas. Happily I have a lot of sock yarn, so it will just be a matter of choosing another skein and getting started.
I’m truly hoping that life will begin to slow down a little bit for us. We have been going back-and-forth on listing our house for sale. We have tried to talk to various experts in the area and also watch the world news to see what’s predicted to be happening. There is a condo building between Mom‘s new apartment and Mandy and Brad‘s house that we are very interested in. Almost all are owner occupied with no stairs in the units and an elevator in the building. I think that’s important as we are growing older and I have problems with my feet and back. However, they rarely come up for sale. Until this morning we were considering putting our house on the market and moving into a 55+ building until a condo became available. However, the apartment is very expensive and we would have to sign a year lease. With the economy as it is and all of the uncertainty going on right now, we’ve decided it would probably be better just to wait. Our plan had been to sell our house so we would have the cash to jump right onto it when a condo became available. However, although our neighborhood is not the safest place in the world, we feel it’s wiser to remain here for the time being even though housing prices are sure to fall and we won’t get as much for our house later. It has truly been a very difficult decision. We both feel a peace about staying here, at least through the winter unless something happens with a condo. And honestly? I don’t want to move twice again in just a few months.
After moving from our house in Spokane into the camper for a year, then into this house last spring. Moving mom last month and all of the work with her house, we are both exhausted. We’re still trying to get her completely settled into her new apartment with the caregivers that are taking care of her there and it just seems almost too much to add one more thing.
Thank you all for being so understanding with my sporadic appearances here for the last month or two. You are all such blessings in my life and I hope that I can be a bit of a bright spot in yours. May God bless each and everyone of you throughout the coming days. I hope you all feel just a little bit of the love that I have felt from each of you. Take care of yourselves my friends. I’ll be back soon. 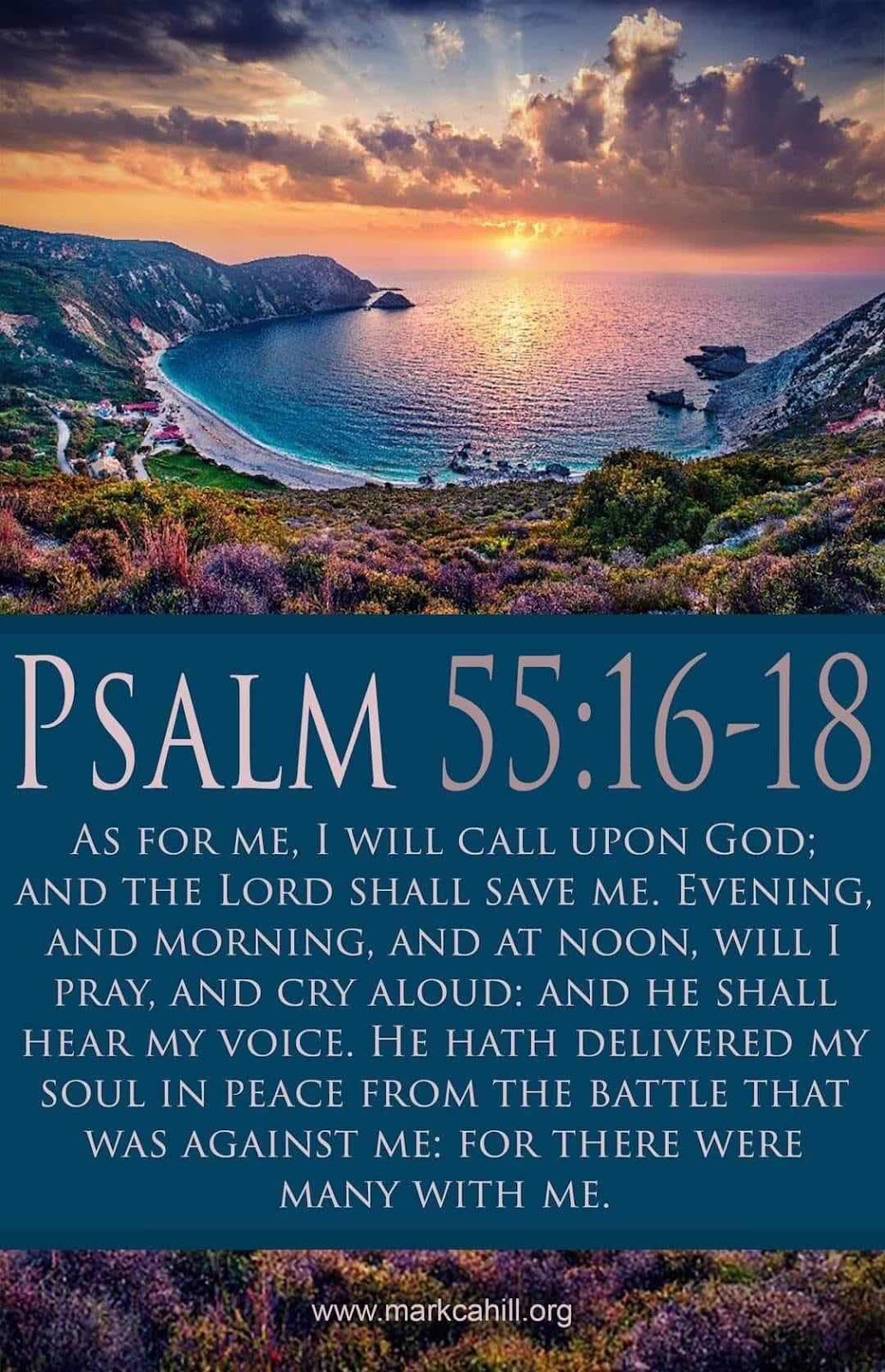