While Mandy, Brad‘s mom Marilyn and I were at home with six little girls plus Piper for her birthday party, Brad, Dennis and a friend went flying. Dennis took the flying photos with his iPhone and texted them to me. I think it’s funny that no matter who takes the pictures and emails them or texts them to me, in my photo gallery on my phone they are put in the time that they were taken. So, little girl party pictures are interspersed with flying!
That sounded like a long and convoluted paragraph I hope you understood it! Here we go!
Here is the birthday girl wearing her dirndl that they bought for her while in Germany last month.  She really wanted to wear it for her birthday. 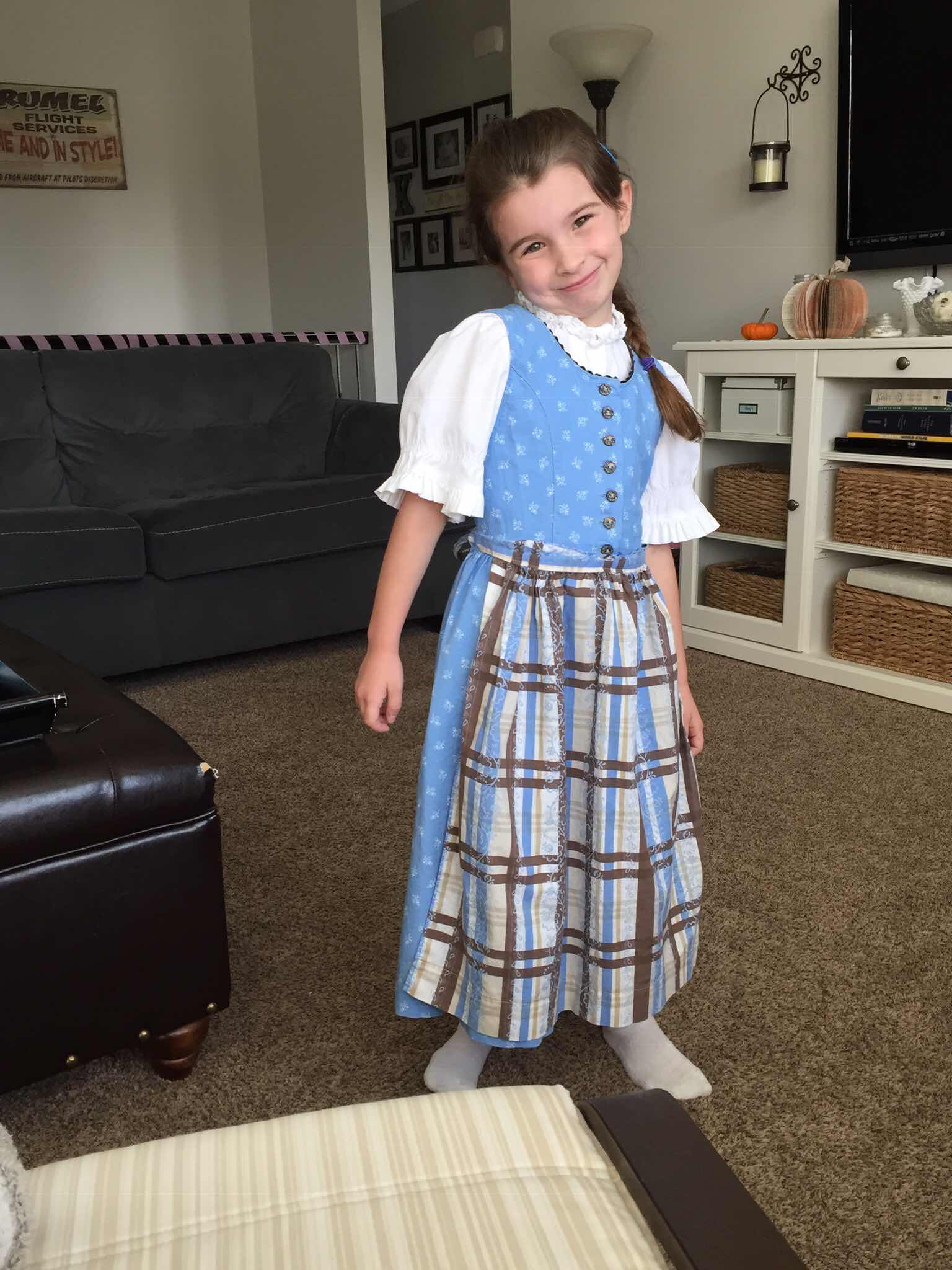 Seven little girls making princess crowns and magic wands. I was absolutely no help whatsoever as my back was acting up and I spent the entire day in the recliner chair. Thank goodness for Marilyn and one of the girls mothers who stayed and helped Mandy. 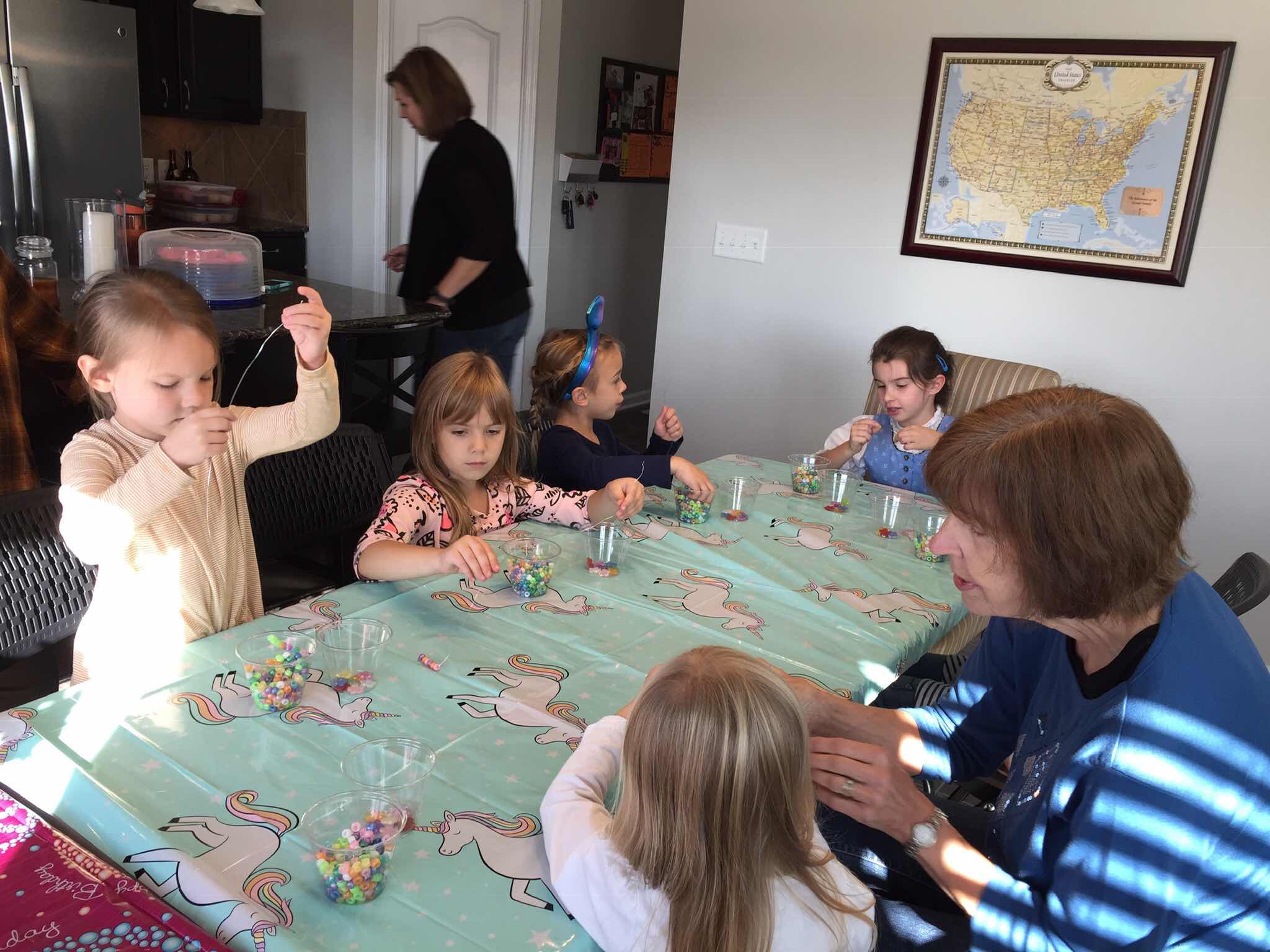 Here they are, minus one little girl.  They were all so good and play so well together. 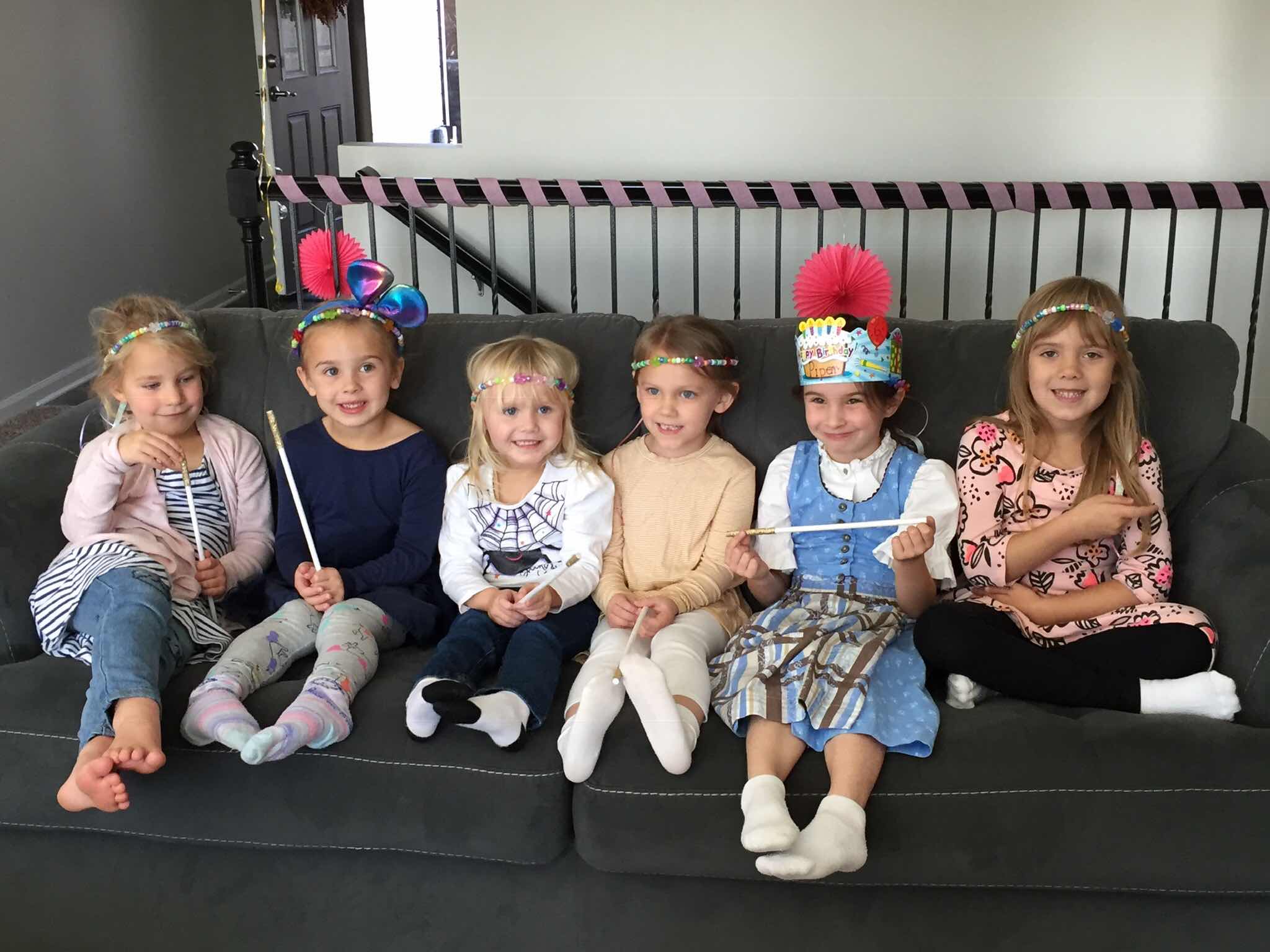 Of course what birthday party for a little girl would be complete without “pin the horn on the unicorn?”  Notice they all got them fairly close except Piper? Hers is the one with a “P” down by the hearts. 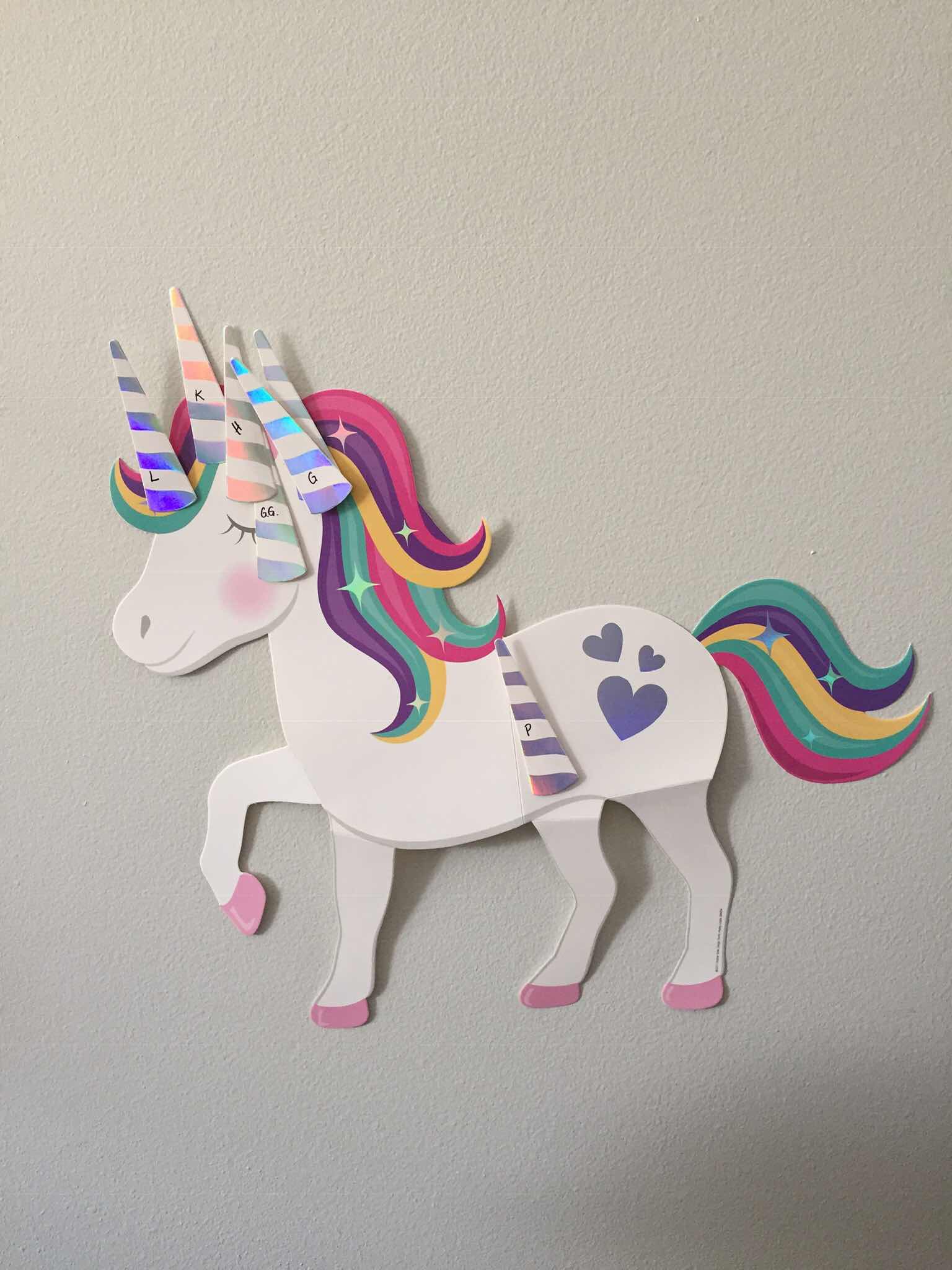 Then it was outside to bash the unicorn piñata to try to get the candy out of it. For little girls they were pretty strong!  Just look at that blue sky. And some of the girls were barefoot. Who would have guessed that there would be 3 inches of snow on that grass the next day? 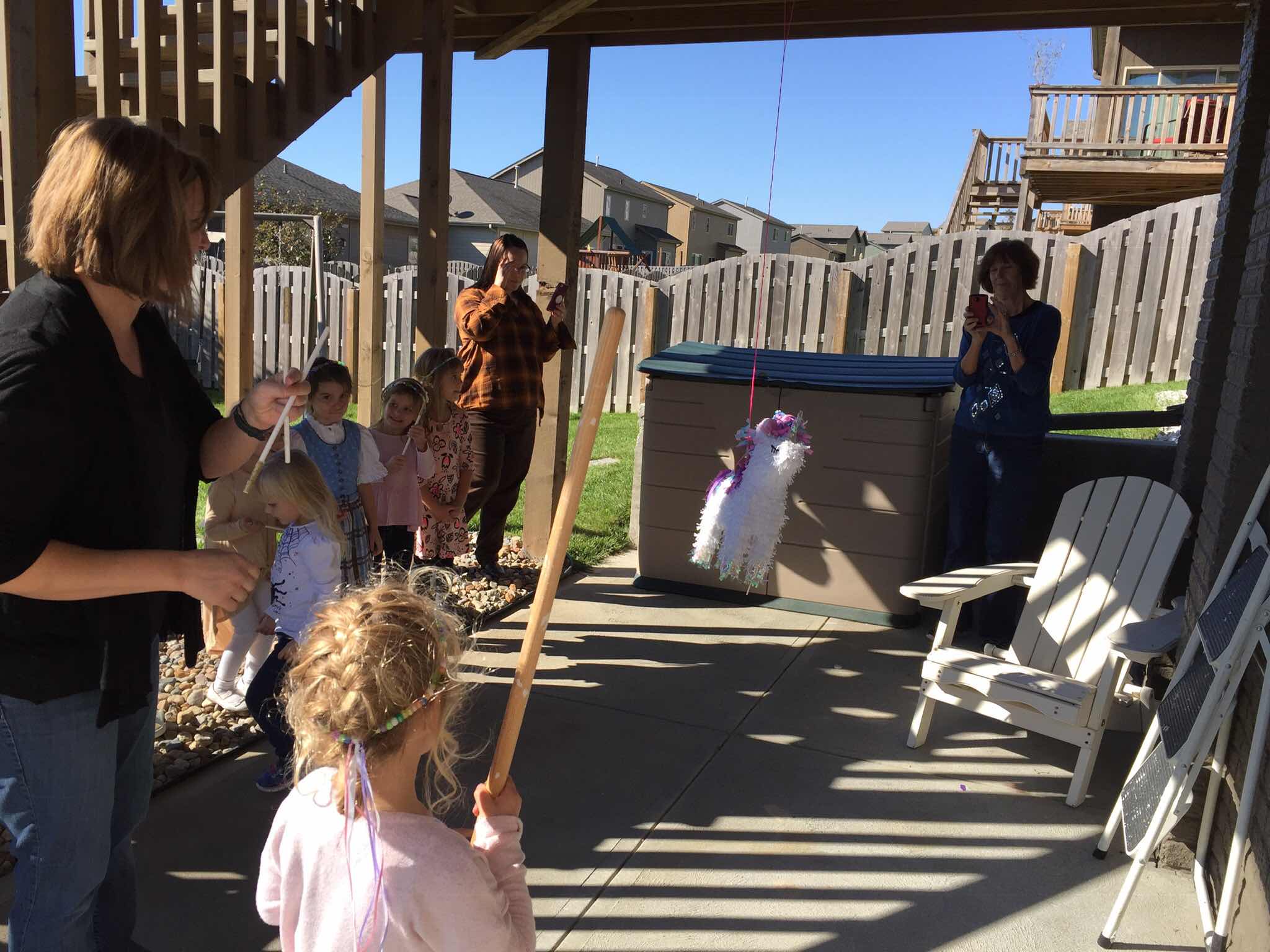 Meanwhile, the guys are up flying around. 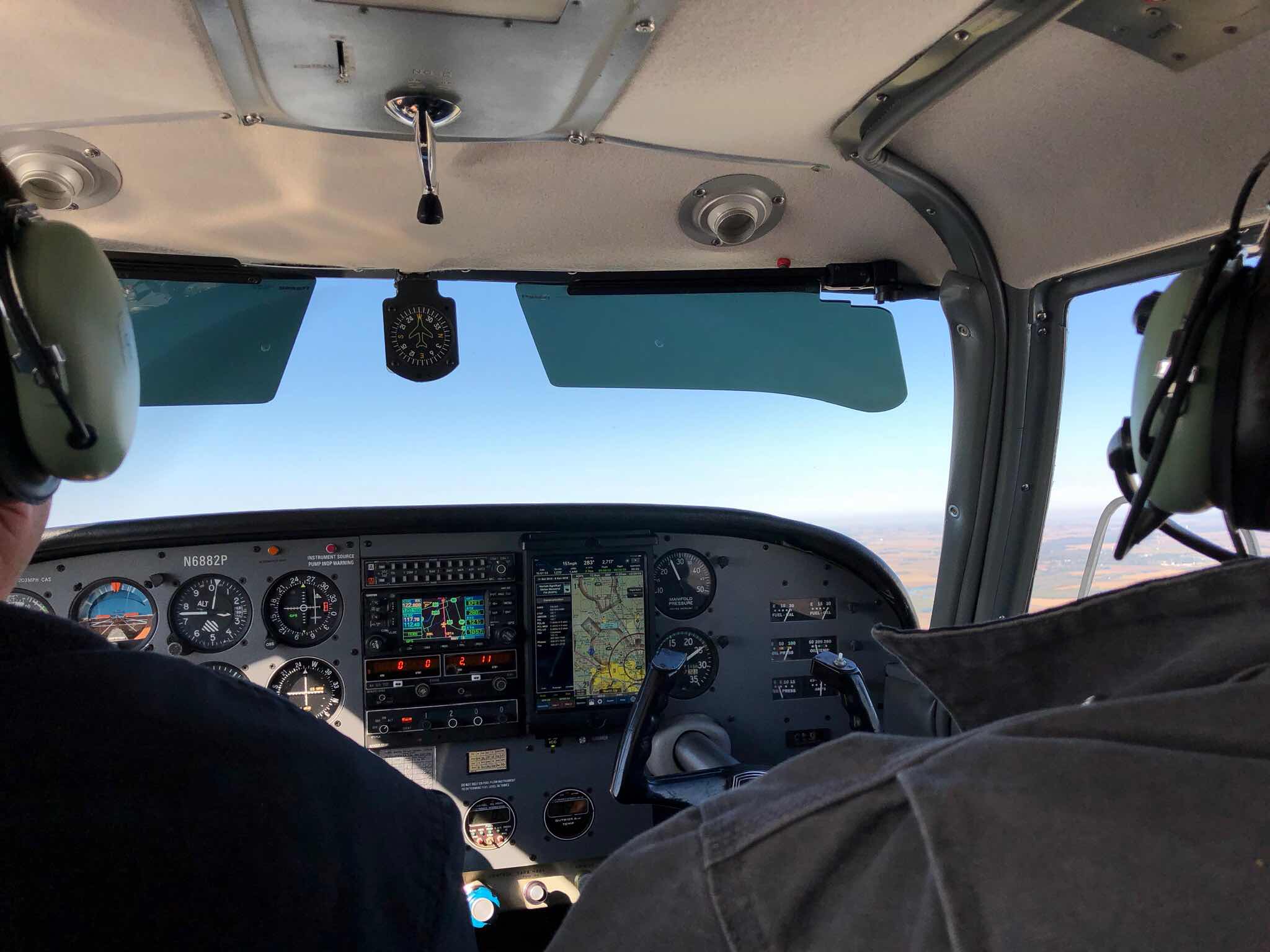 I could not believe how high the Missouri River and all of the lakes were back there. While we’ve been in a drought here in the west, they have an overabundance of rain in the Midwest. 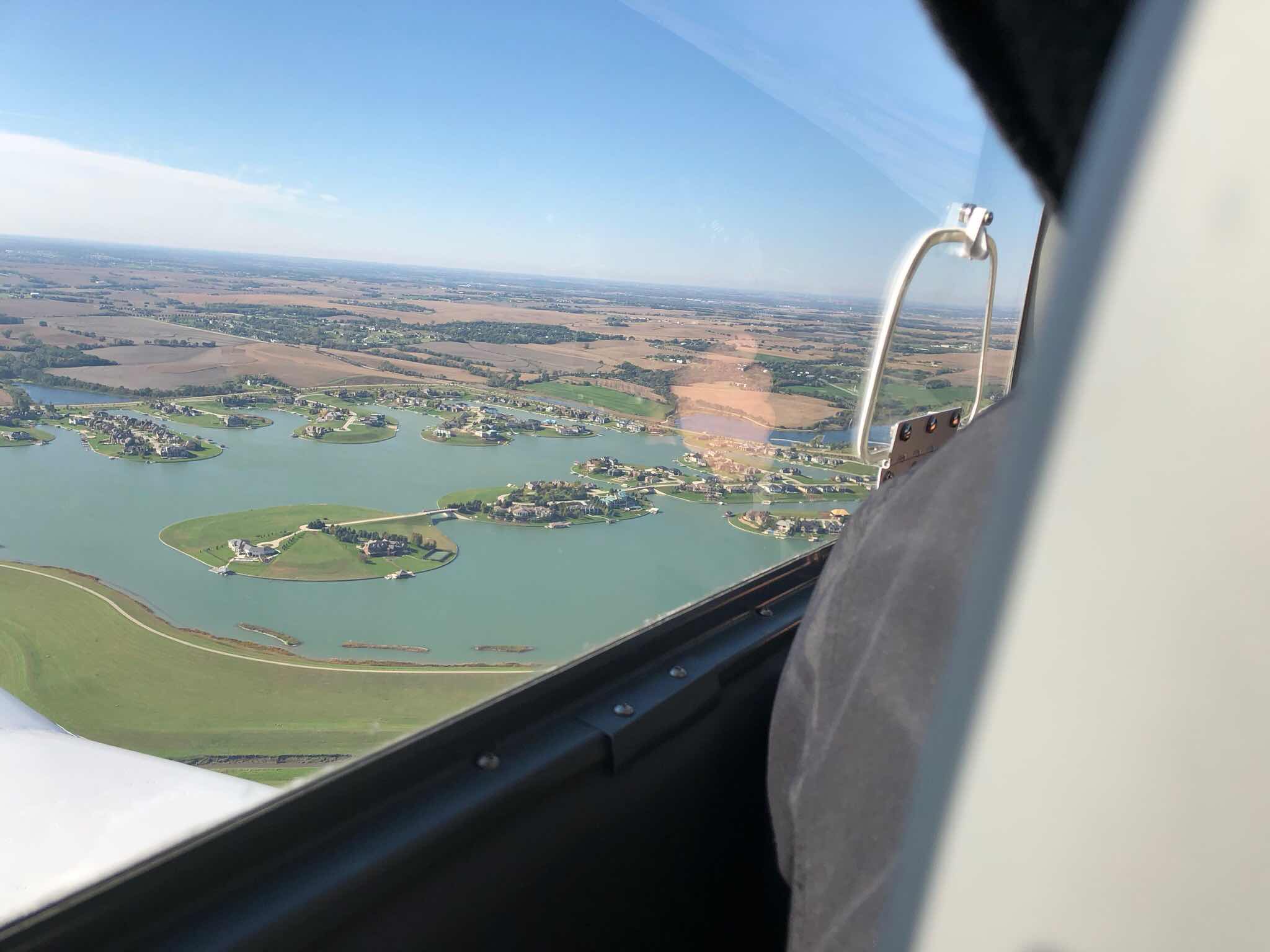 They even flew over the house several times so the girls could see them. Unfortunately Marilyn and I were the only ones that actually waved at them, because the girls were busy eating their cupcakes at the time. 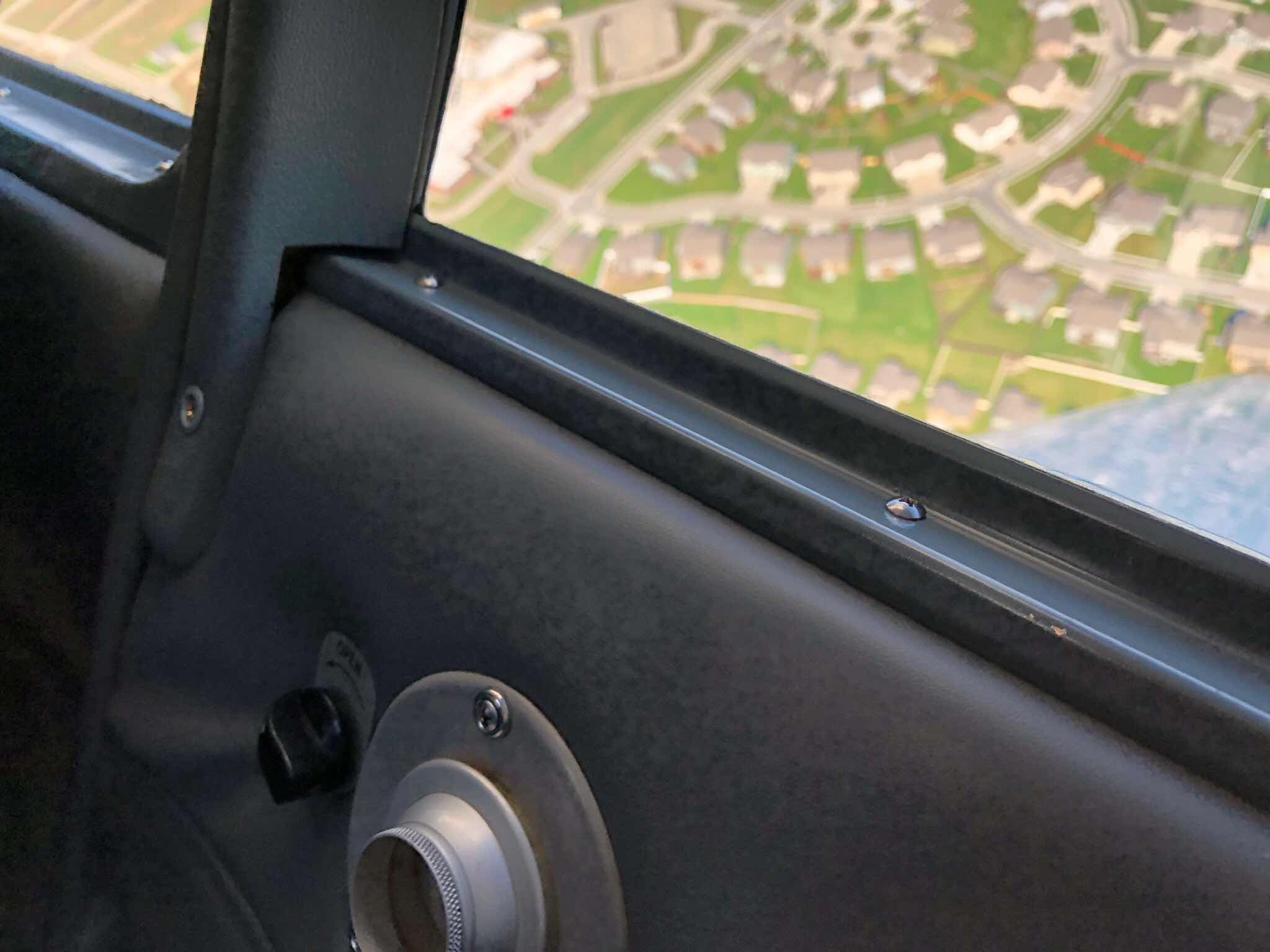 That evening there was a grown-up birthday party too. We had 24 people at the house Saturday evening for hotdogs, nachos, chips, cupcakes and all the trimmings. Both sides of the family were well represented. I am so very happy for Brad, Mandy and Piper to be so close to both of their families after the years of moving around. I think it’s wonderful for Piper to be able to get to know her cousins on both sides, along with aunts, uncles, great aunts and uncles and grandparents, who all spend time with them.
And here I am back home. While driving through South Dakota on the way home I finished this shawl. It is a Christmas present so I won’t name who it’s for. This is the “Utilitarian Faroese Shawl.  I really do believe it’s my favorite shawl I have ever made.  The shaping around the shoulders makes it hug your shoulders and neck so you don’t have to use a shawl pin and it doesn’t fall off.  It’s a very easy pattern too. 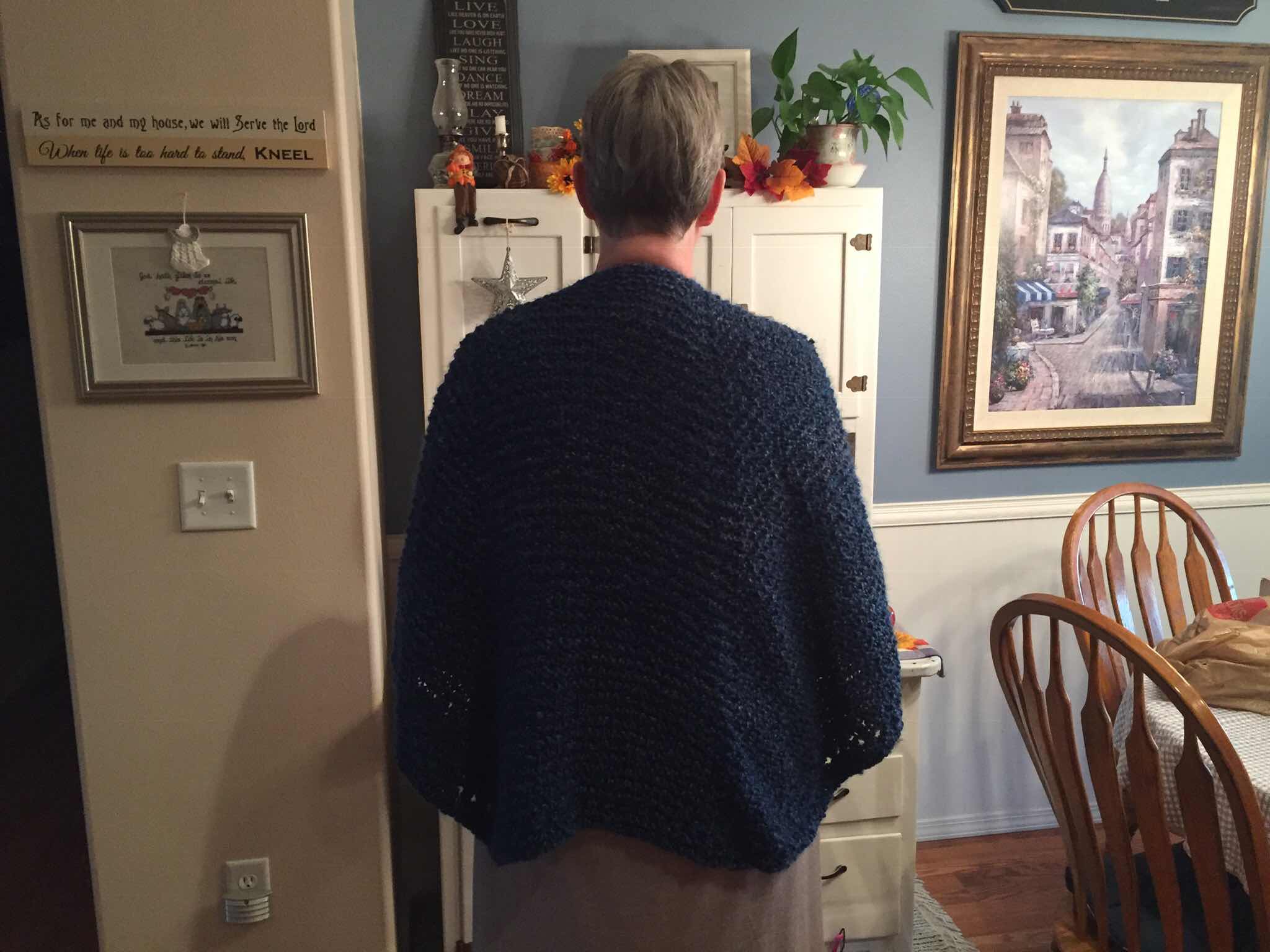 The recipient of this shawl is always cold! I think this will be great for her in her office, as she can just throw it around her shoulders while she’s sitting at her desk and not have to worry about it falling off or getting in the way. 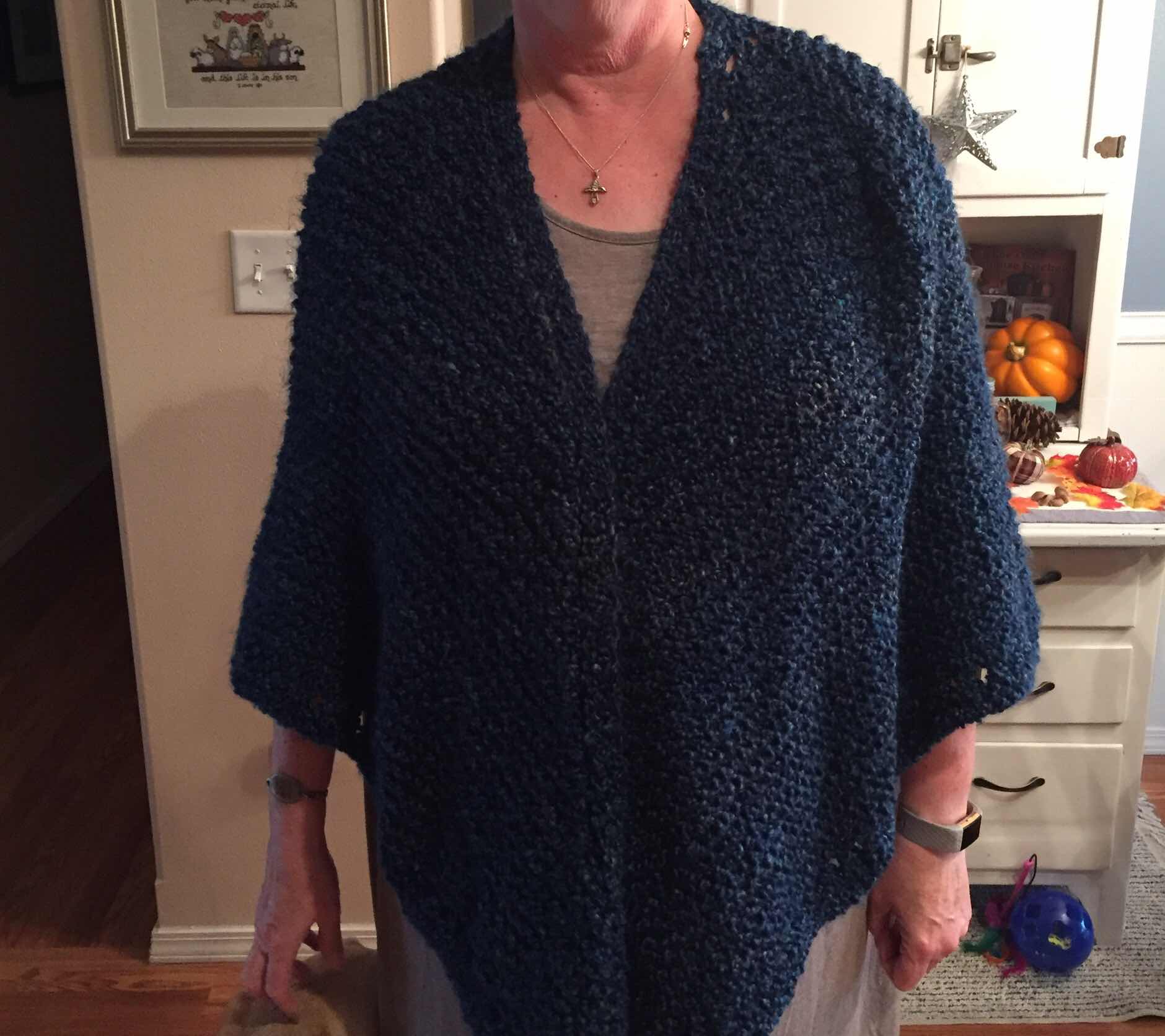 I almost finished Piper’s new “Wonderful Wallaby” while we were there. All I had left on this when we had to leave was about 1/2 of the hood.  Not bad for only a few days of knitting! I kitchener stitched the top of the hood and the underarms and put a button on and off it went to her a day or two after we got home.  It doesn’t quite match Mandy’s, but the color and dye lot that I previously used has been discontinued. I hope you are all having a lovely week. We have had beautiful warm weather and blue skies, but that’s beginning to change. A lot of the leaves have turned and have fallen.  We are planning to go to a local orchard this weekend with Jeremy, Alicia and the boys. We’re hoping the weather holds for that.
Last week the doctor put me on a medication for my back that actually seemed to be helping a little with the spasms. Unfortunately, yesterday I had an allergic reaction and after talking to the pharmacist, it was decided I probably should stop taking it. How disappointing. So the saga continues.
I have started the mitten making for next year and I’m currently on the third pair. I called them my “seed mittens” to encourage me to keep going! Ha!
“Cast all your anxiety on Him because He cares for you.” Jeremiah 1:5
Blessings,
Betsy
Posted by Betsy at 10:18:00 AM