We had a wonderful time visiting Alex, our dear DIL and baby J. We arrived home last night around 5:00 after a very, very smooth trip from London Heathrow airport. Our flight from London left at 10:40 AM and we arrived in Chicago a little after 1:00 local time. Both of our flights left early and arrived early, and were very pleasant. We had rows of seats to ourselves both flights just like on the way over.  It was so hard to leave. We spent a lot of time not only with the baby, but also Alex and Our DIL. I have to say she’s a perfect baby. She rarely fusses and when she does you know if she needs a diaper change or is hungry.
We went on a few day trips. I’ve already shared with you the London Eye and the one I’ll share with you today is Mountfitchet Castle. There are a lot of pictures so I hope it doesn’t bore you too much.
The following is an excerpt off of their webpage.
“ Mountfitchet Castle and Norman Village is dated from 1066. It’s an open air museum where the visitor can travel back in time over 900 years and witness life in a midieval Motte and Bailey Castle. You can hand feed the tame deer and other rescued animals that run freely throughout the 10 acre site. It’s located in Stansted, Essex in the UK, near Stansted airport.”
This is the outside of the Grand Hall. Not very grand is it? But I suppose it was at the time, well over 900 years ago! 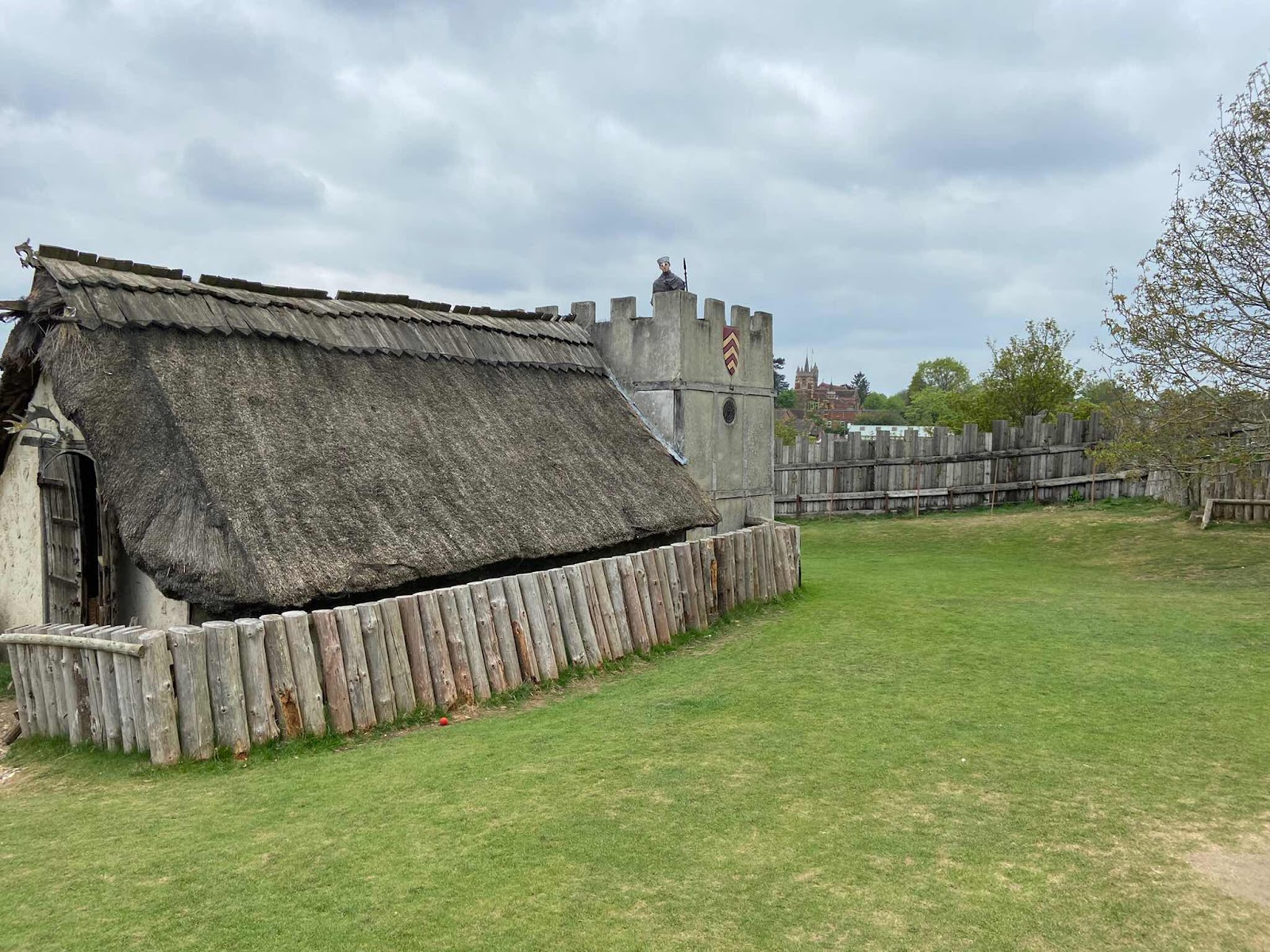 This was the entrance to the area where the Grand Hall is located. The outside of the Castle itself had a dry moat system, which I had never heard of before. 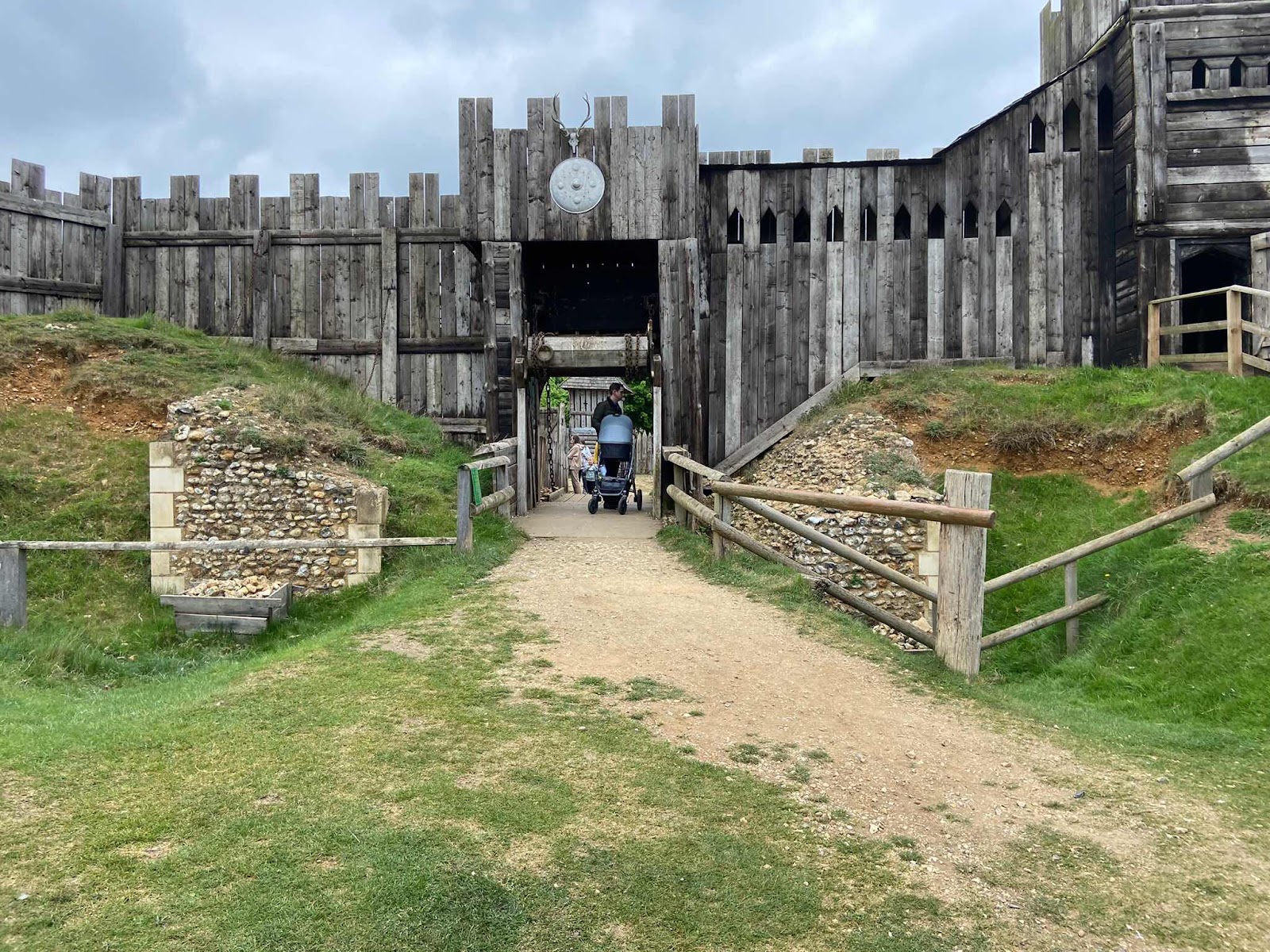 On the left in this picture is a foot and arm stock. If this castle and attached village is any indication of the horrors that met people in life back then, I’m sure glad I wasn’t alive! They had crazy, awful ways of torturing people and this village was full of replicas of them. 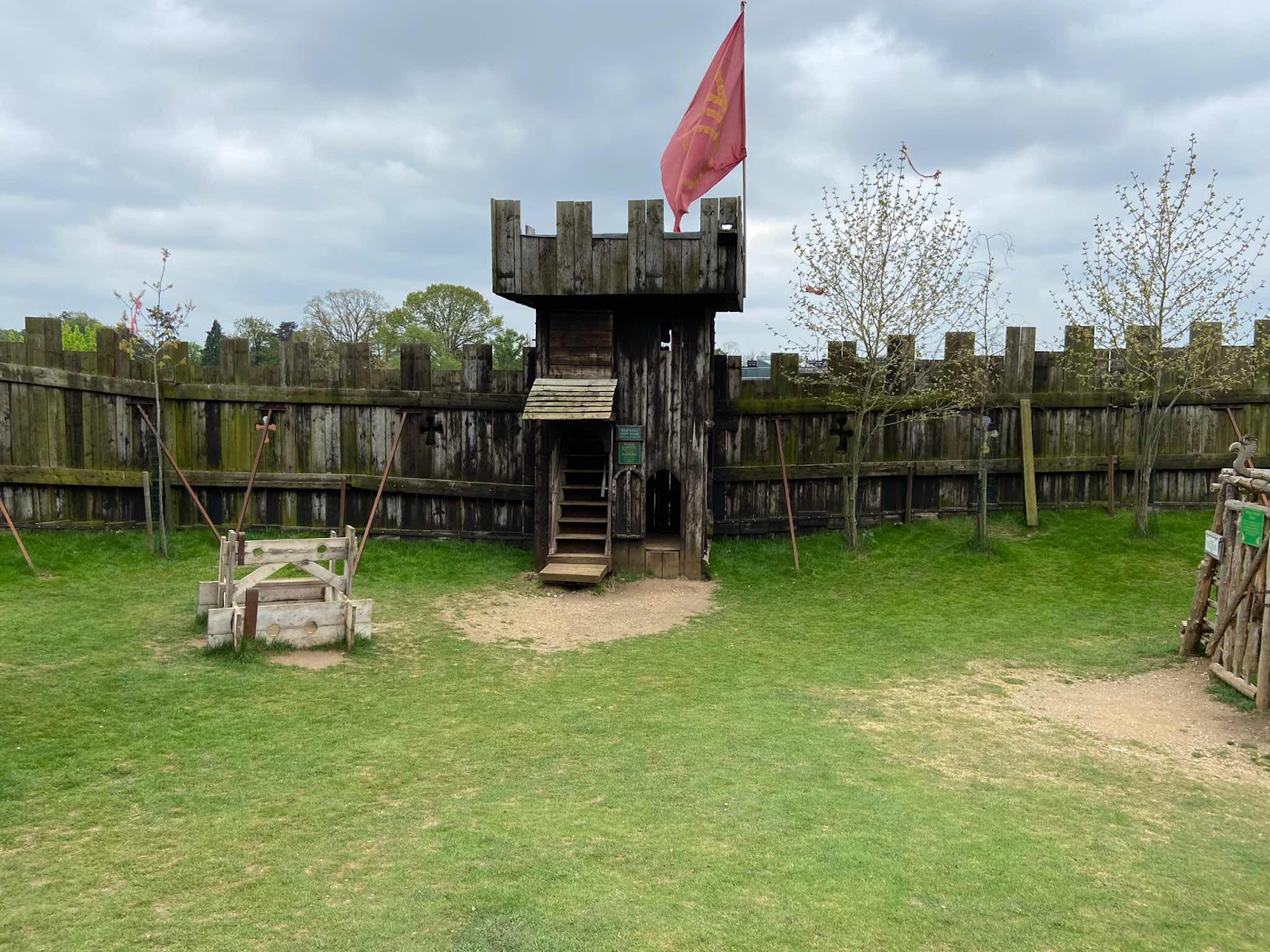 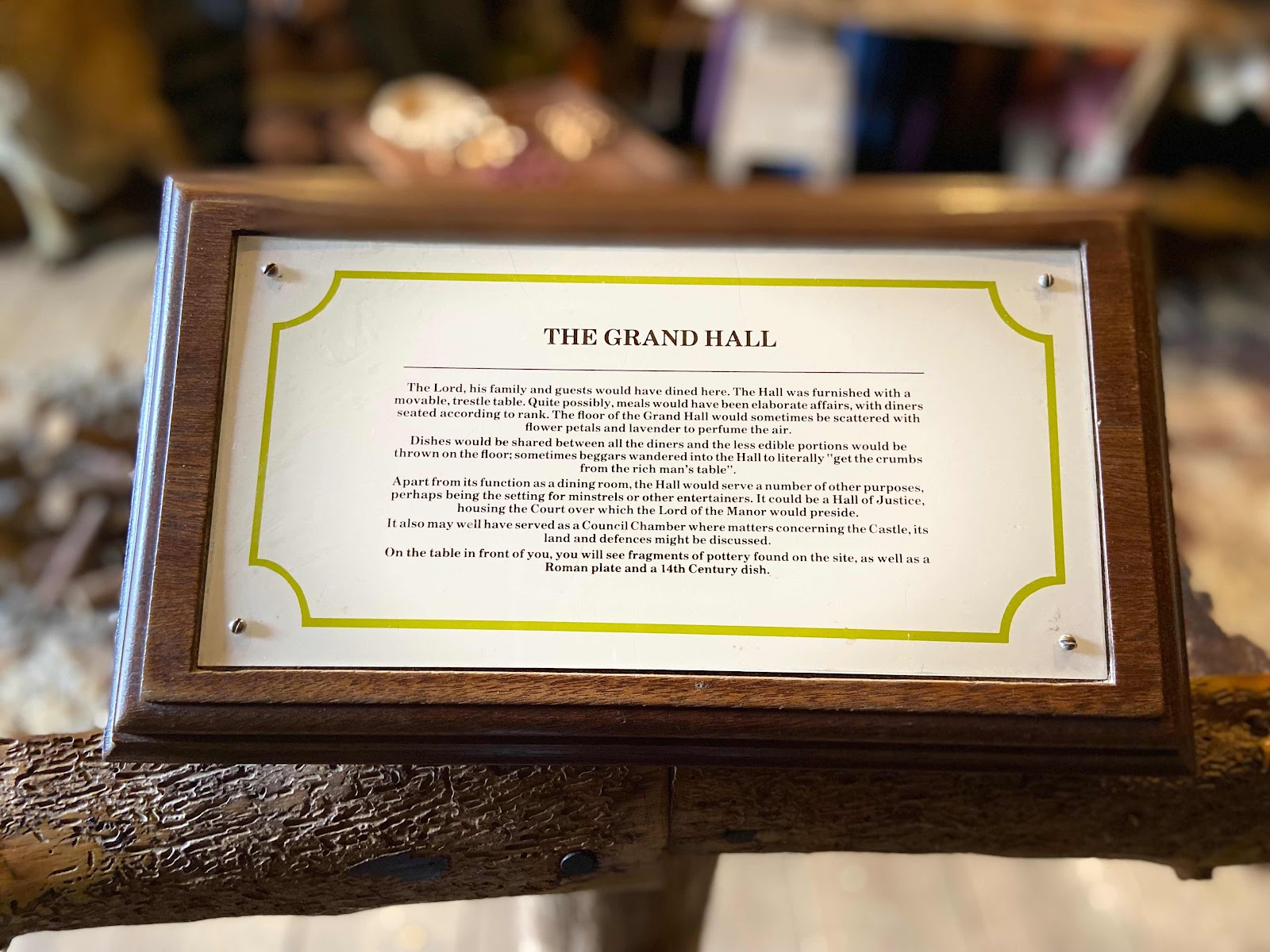 They had the grand hall set up in this fashion. The Lord of the castle is in the big chair on the other people gathered around him. In the back was the armory room where several different paranormal shows have filmed and claimed to see and record ghosts. The Lord’s bedroom was upstairs above the armory room. 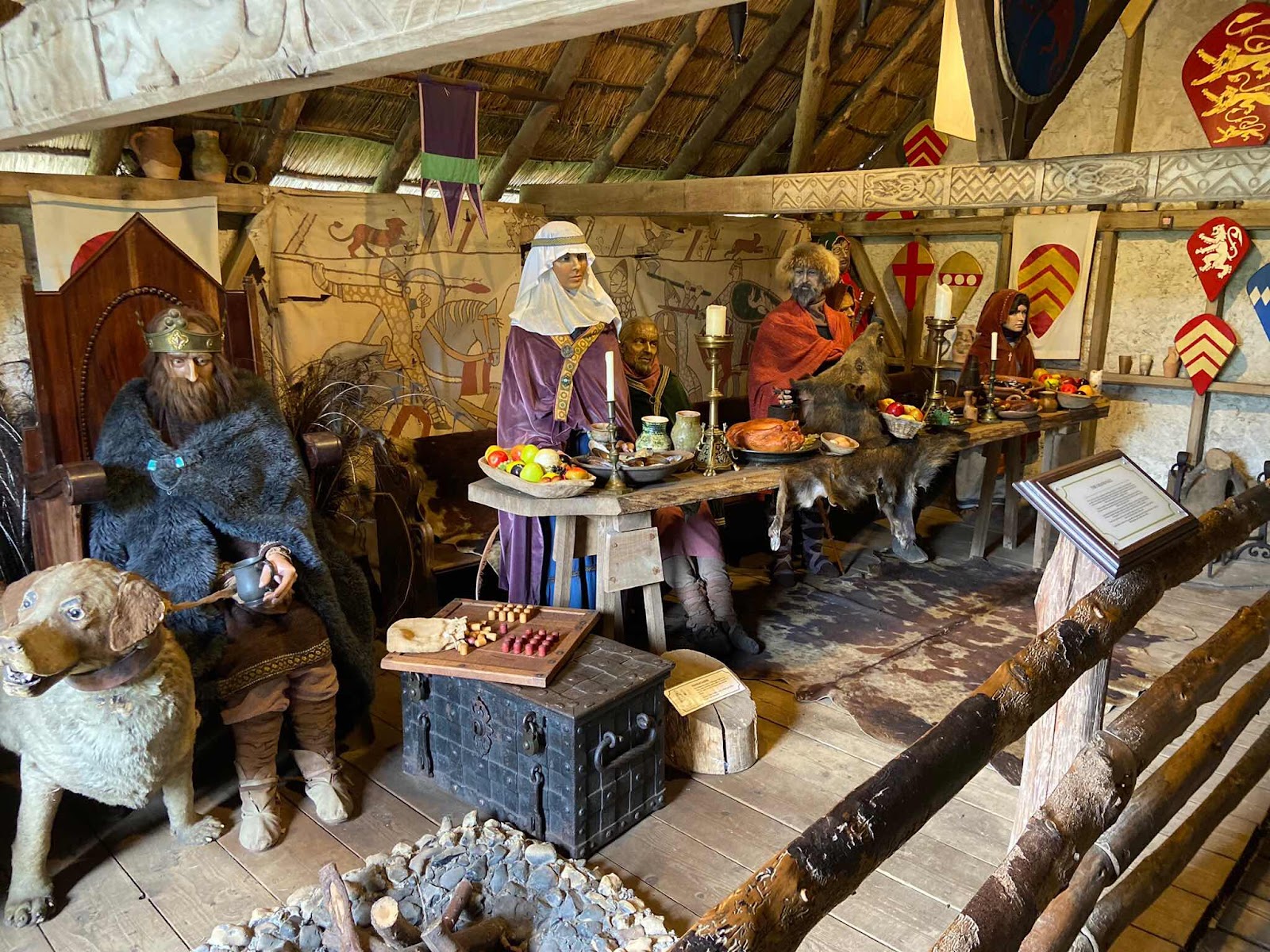 Dennis had put Alex in the leg stocks and he was begging for mercy!😂 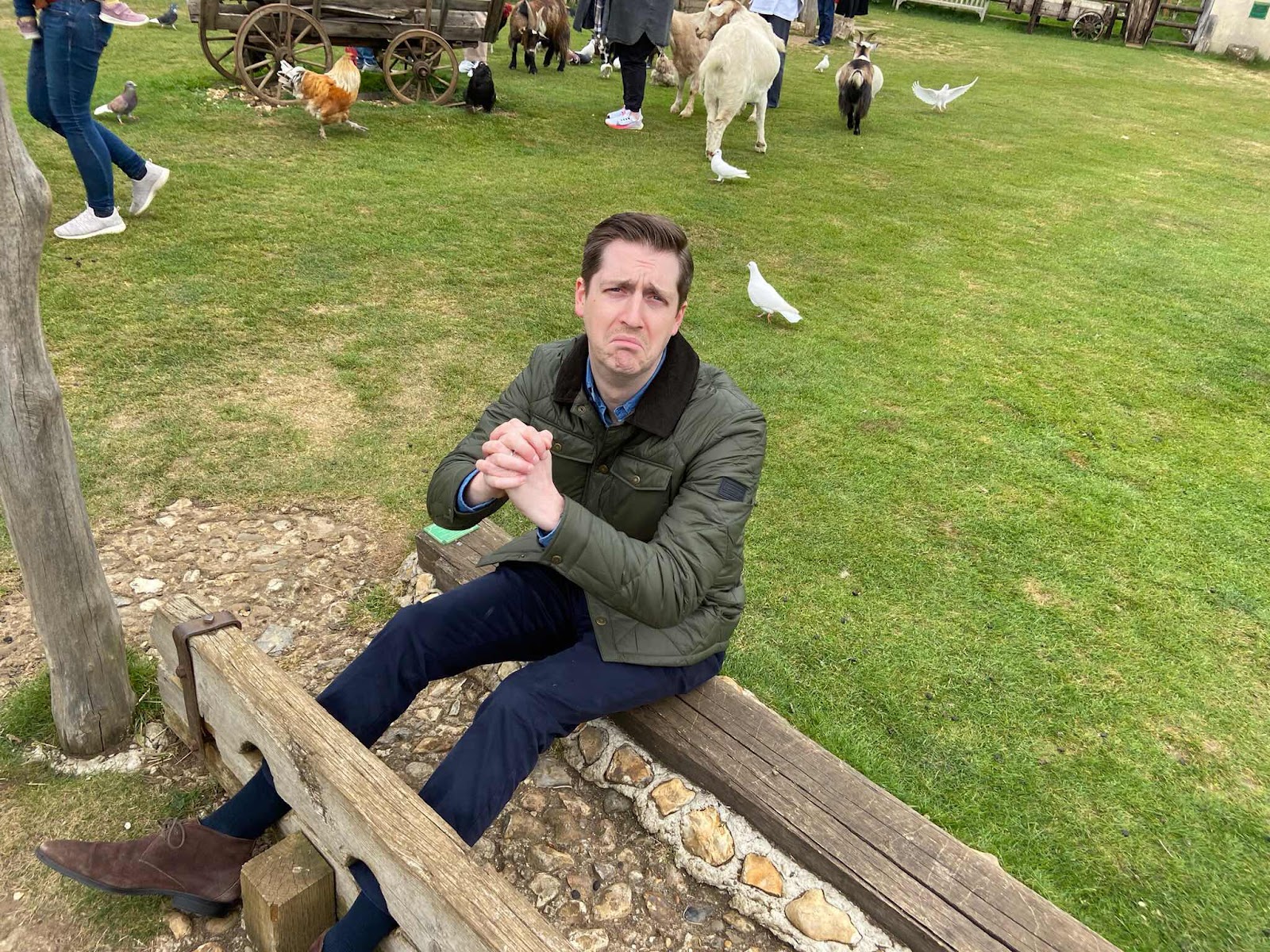 Just a few of the buildings around the village. It’s hard to imagine that people actually lived the way these people lived. No wonder nine out of 10 children died before the age of six months. 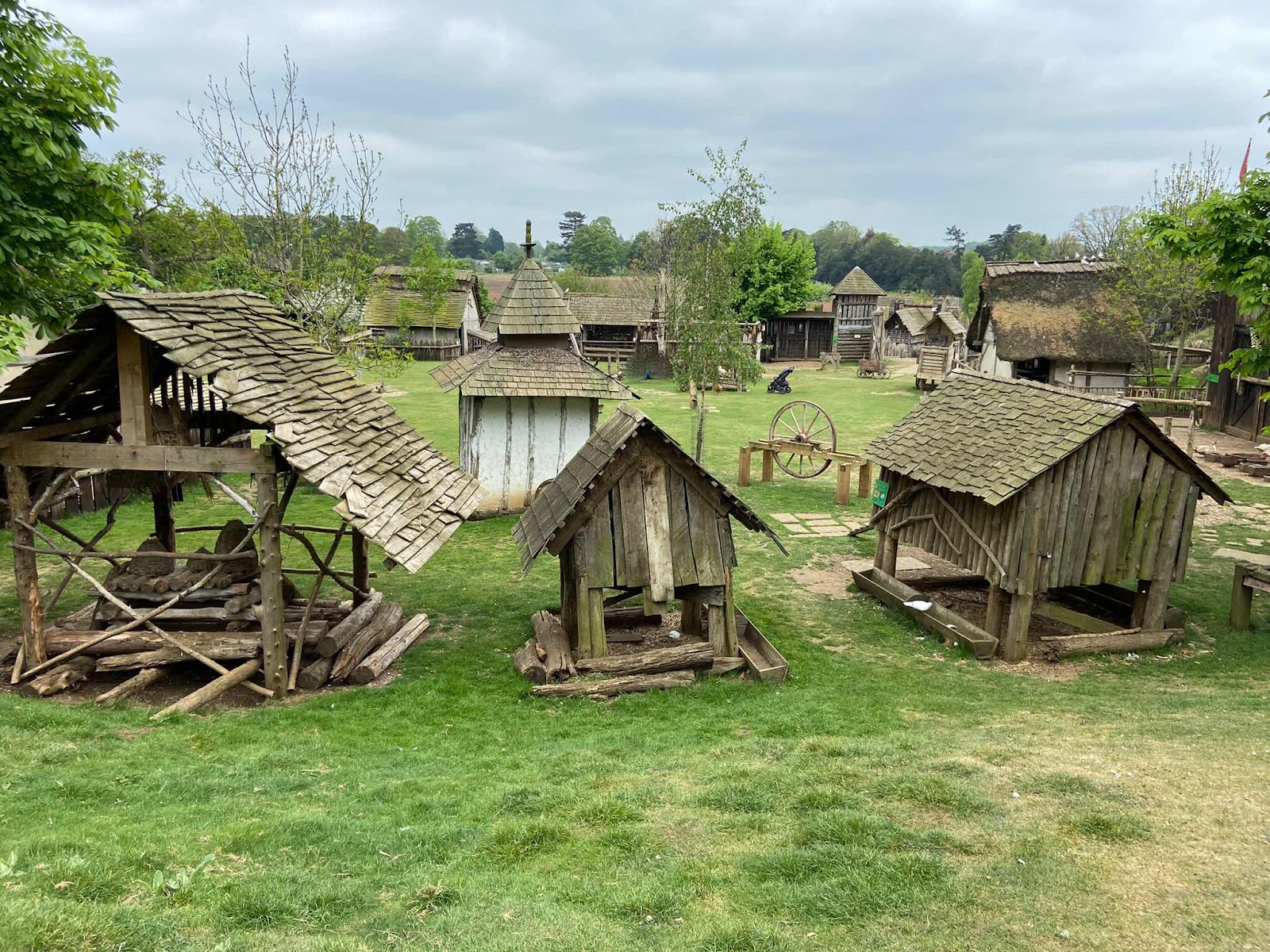 There were all kinds of free ranging animals around the village. We bought a bag of feed and so I had lots of friends as I made my way around! The animals are all rescued from various shelters or farms. They are all believed to be actual breeds of animals that lived in the village back in the 1000’s. There were several male peacocks and about 10 peahens also. The males were “strutting their stuff” so to speak and had their tails on display a lot. However we were unable to catch a good picture of them. 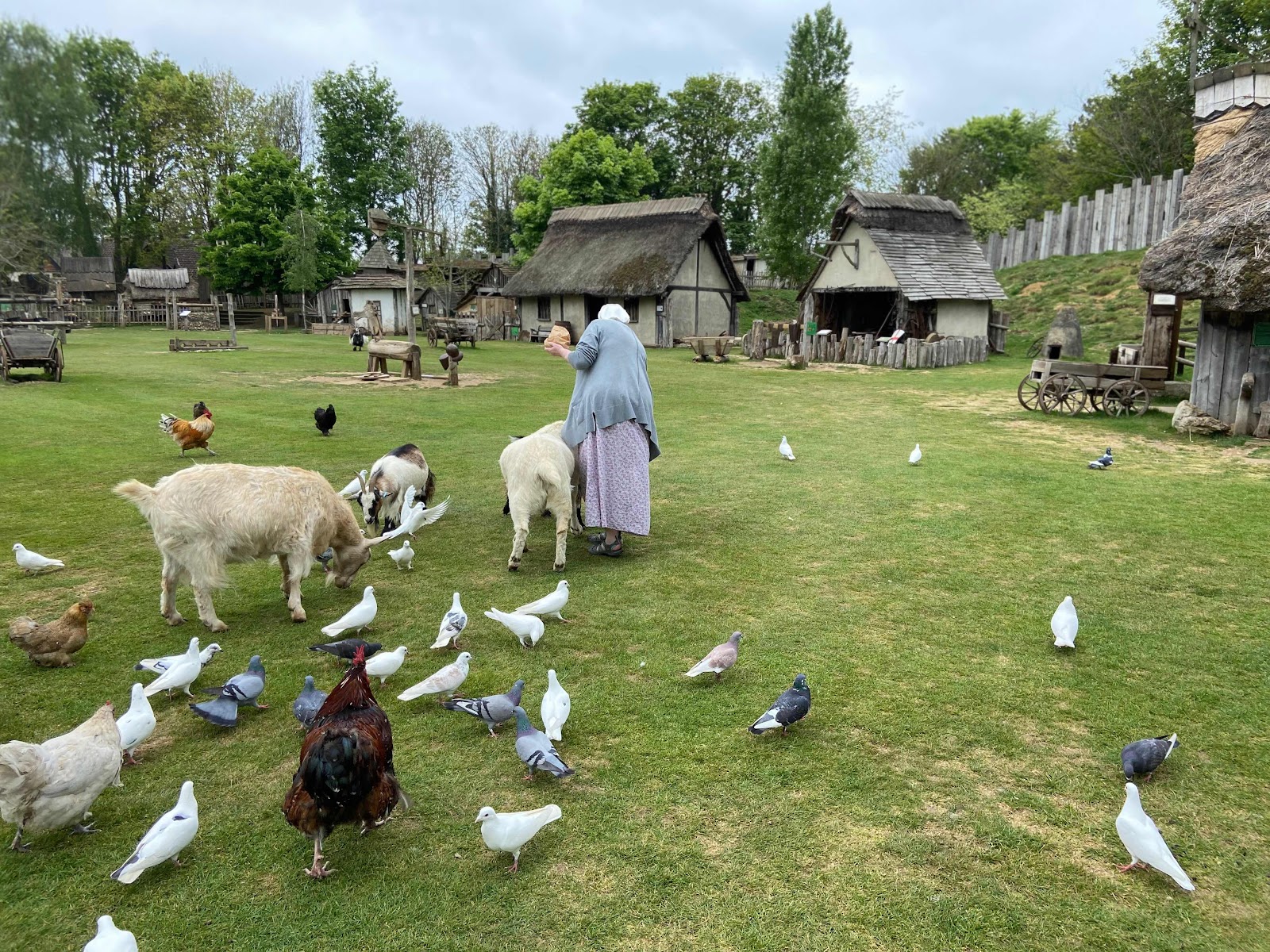 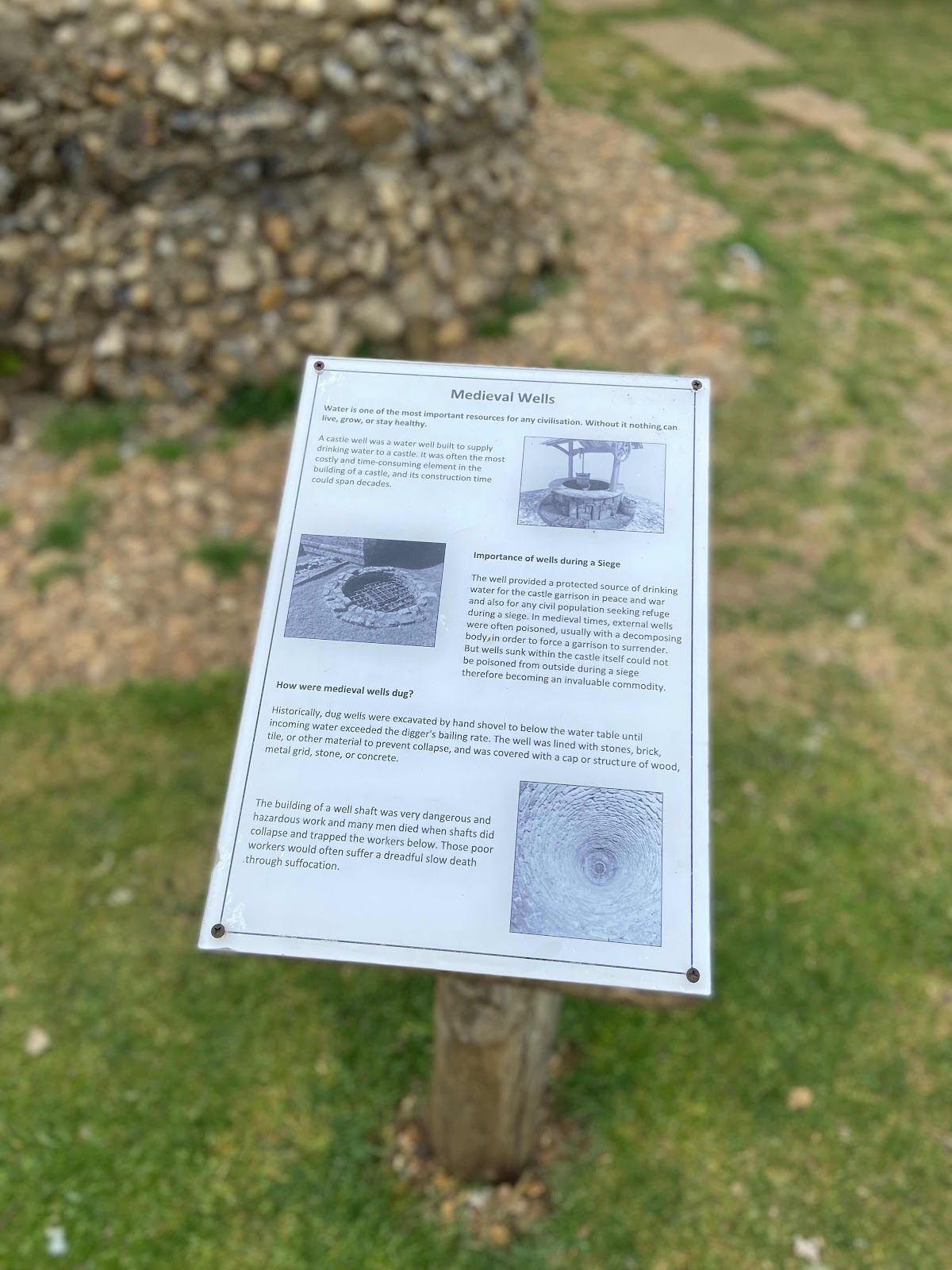 This was called the “Hell Hole” where they put live people inside and just left them to die. Rats and other vermin crawled all over them and there was nothing they could do. The hole was about 5 feet deep and 4 feet wide and about 5 feet long. They had so many torture devices in this village that it actually got to be a bit depressing. 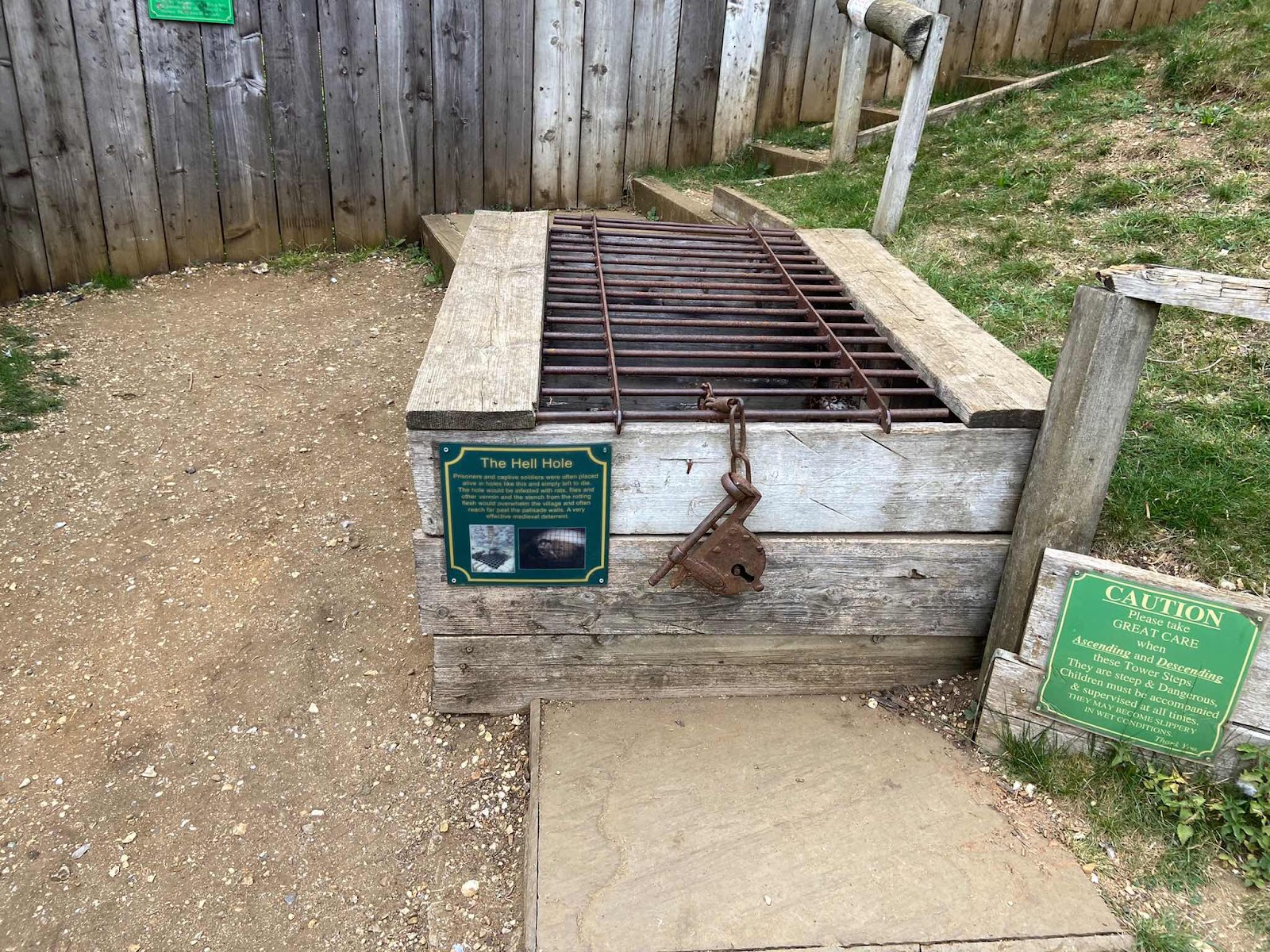 Here is a photo of one of the peacocks, but we weren’t able to capture the colors on his feathers very well. The rattling noise the hollow feathers make when he shakes them is quite loud. 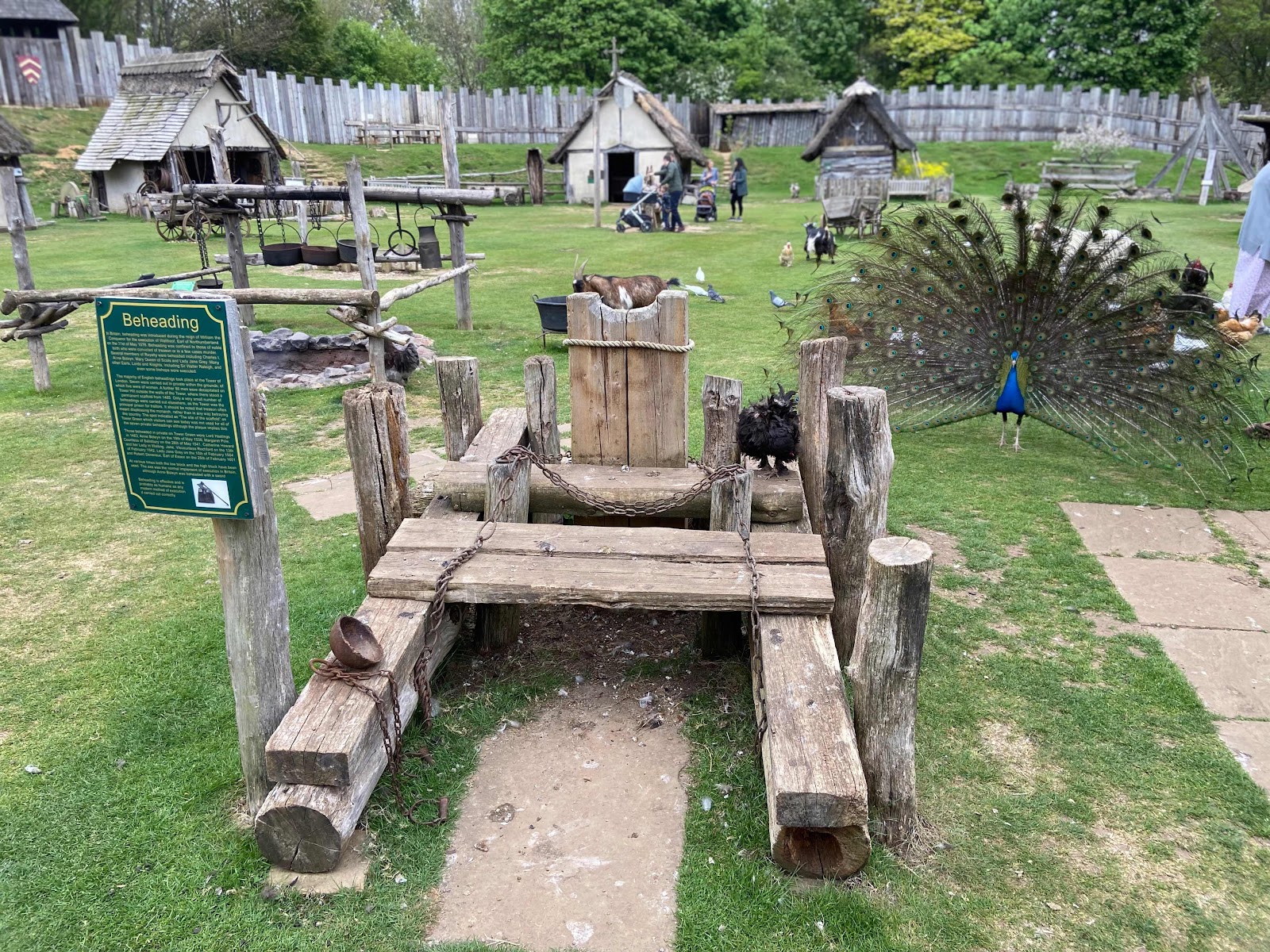 We had a wonderful time, but the last week we were there Alex had some kind of a sinus thing going on. I managed to catch it and came home yesterday with no voice. We did have our pre-travel Covid test and it’s not Covid. I guess people do still have regular colds don’t they?
I have another day trip to share and then I’ll be back to regular programming. 💜😍
Please take care and stay well. 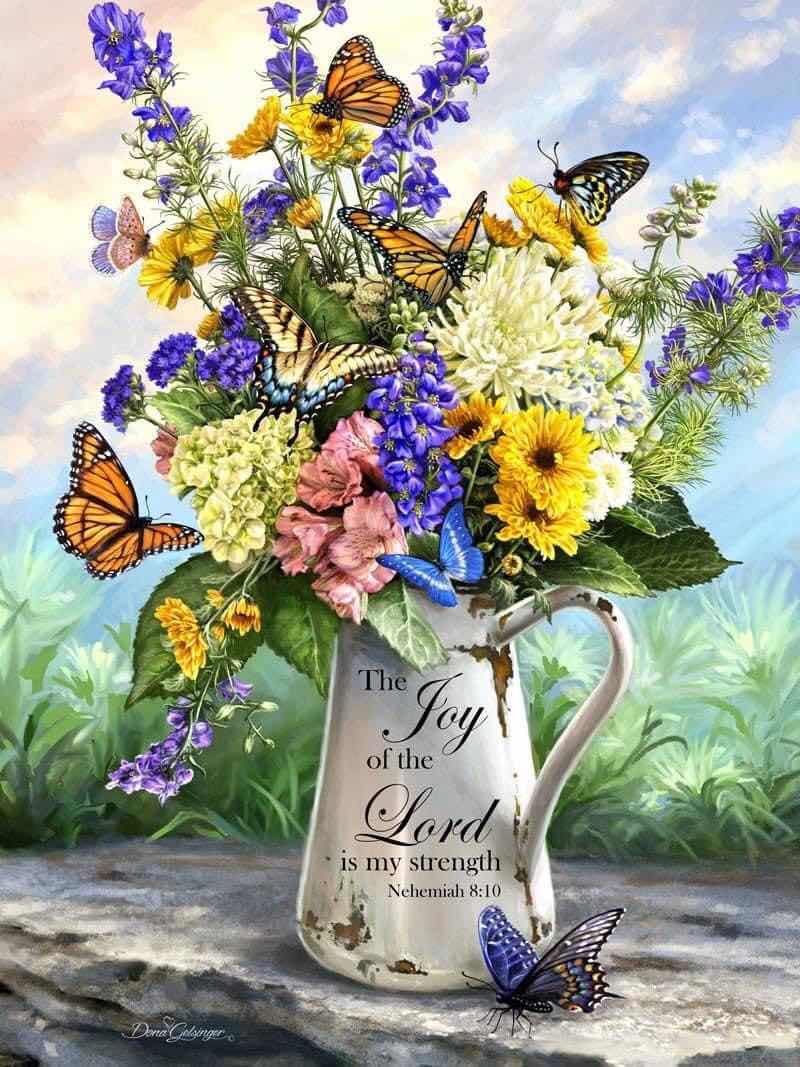