I think I'm up and running with this new laptop.  I think.  All I can say is that we never, ever, ever, ever will buy anything from Best Buy ever again.  Gosh!  Did I emphasize that enough?  We think that we will really like the computer we bought, once the learning curve is complete, but...the Geek Squad failed us big time and completely wiped the hard drive on our last computer and then told us that the data was gone when we brought it in.  Um...not true.  We were still using it when we brought it in to transfer the data to the new laptop!  So we took our "My Cloud" device in for them to use to transfer to the new computer.  Yesterday, they said our back up "My Cloud" was empty.  What?!  They basically told us that they lost all of our information, documents, photos, etc., on both the original desktop computer and our external hard drive storage.   This was after we paid them $200+ to transfer our data.  To say we were upset was an understatement.  I took the new laptop and iPad to church this morning and a friend was able to transfer photos and then Jeremy looked at the "My Cloud"  device this afternoon and transferred documents from it.  In other words, nothing was lost, but the Geek Squad didn't have a clue.  They did nothing except take our money.  They had the new computer all week and didn't do a thing.  Friends fixed the issue in less than a half an hour!  Do you think they'll refund our money?

Sorry for the rant.  I try not to do that on here, but for goodness sake!  Whatever happened to customer service?  We had heard other people say this about the Geek Squad here but we didn't know where else to turn.  From now on, Jeremy will be our first stop! :-)

Dennis took this photo of me at the lake this afternoon.  The lake is still frozen over with snow on it.  We had high hopes that the snow would mostly be gone like it is in town.  We should have known since the elevation is much higher there that it would still be there after all of the snow the past few weeks.   Last year we were camping by April 1st, so we had hoped that we could take the cover off of the trailer and put the slides out today.  Then, Chloe and I could go up during the week and take a few things up at a time.  I'm SO ready to be at the lake.  But it's been a long hard winter and it doesn't look as though it's going to give up it's grip anytime soon.  It was 56 today though and it supposed to be in the 50's all week here in Spokane so maybe by next weekend we can hike in and open the trailer.  I want to be cozy in it again.  I love our trailer. 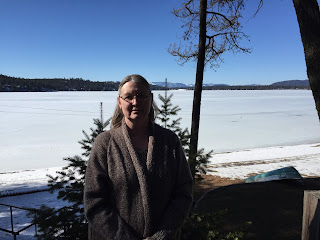 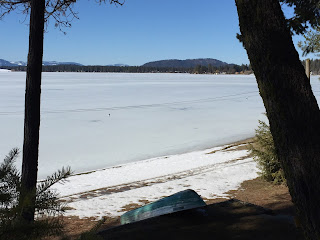 Looking up towards the cabins by the store.  Brrrrr 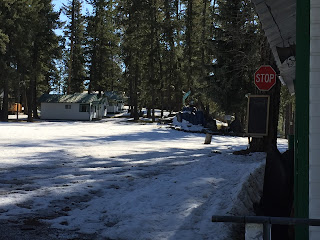 I'll show you some of the knitting I've done since I last posted photos.  I do have more that I'll photograph tomorrow for my next post.

I made two more squares for my Cozy Memories Quilt.  I really enjoy making each of these nine patch squares using bits and pieces of sock yarn. 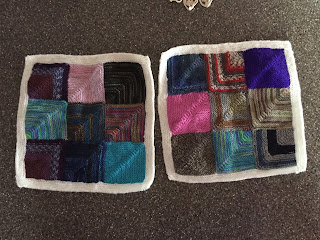 I crocheted another baby blanket with Caron Simply Soft yarn.  This makes two of these in the last few weeks.  I really like this pattern and colors for a boy. 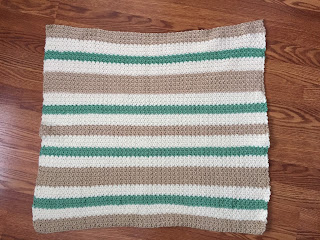 Last week Dennis told me he would like a couple more bookmarks for his Bible so I got some materials out and came up with these.  One is a verse from Song of Solomon.  The other has our names and anniversary date.  40 years on September 1!  The man deserves a medal of sainthood for putting up with me. :-) 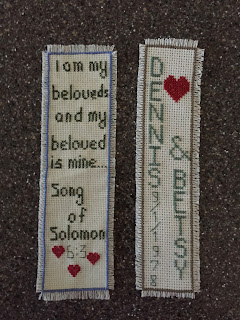 Because it's getting late, I'll end with this picture of Miss Piper.  This was her Kindergarten Round up photo last week.  She was so excited to spend time at the "Big Kid" school.  I think she is just the cutest little girl ever. 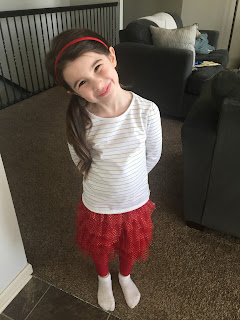 I do have more knitting to show you, so I'll be back soon.  Sorry for the rant earlier.  I know many of you understand computer frustrations.  Dennis and I are not techies at all.  We can use the machines if they do what they're supposed to and that's about it.  Please forgive me if I was too irritated in your opinion.

I hope you have a lovely Monday with sunshine and yarn involved. :-)

"So then, just as you received Christ Jesus as Lord, continue to live your lives in Him, rooted and built up in Him, strengthened in the faith as you were taught, and overflowing with thankfulness." Colossians 2:6-7