Happy November!  We have snow!  I did take a photo of it but for some reason it's not uploading.  Suffice it to say, we were NOT supposed to get snow today, only rain.  This girl isn't a happy camper because you all know how I feel about snow.  The weather people had a group session on the news a few nights ago.  They informed us that we're most likely in for a repeat of last year.  Snow and cold without any breaks to thaw out.  I'm sure hoping they're all wrong.

I've been working on my baby blanket just a little tiny bit.  Mainly for a few hours last night. 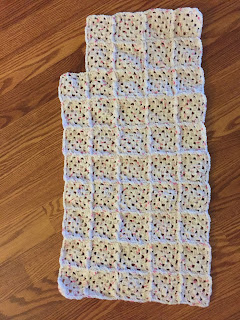 Because I've been knitting on the test knit for Taci at TaciStudio.  I finished it yesterday morning and it's blocking now, although I still can't show it too you completed because the pattern hasn't been published yet.  Here's a sneak peak. 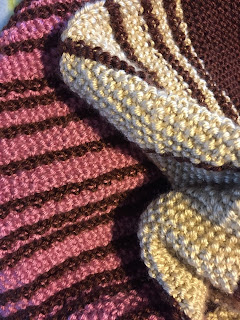 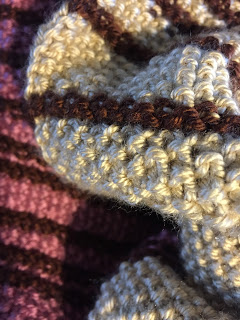 Now I'm going to have to get going on some Christmas knitting so I won't be showing much on here.  I have a few ideas but only one started.  One lonely row.  It's the mystery knit I told you about before.  I had quite a bit done on it when I set it aside to work on the test knit.  Somehow in my knitting bag, my row counter got bumped and the rows were way off.  I could not figure out where I was so I ripped the entire thing out and started one little row last night.  Today I hope to do a bit more.

Piper decided at the last minute to treat or treat as Elsa because it snowed at their house on Halloween just before they went trick or treating.  She thought Elsa would be appropriate.  :-)  Brad is dressed as Brad. :-)  Their tradition is to get a Papa Murphy's Jack o 'Lantern pizza on Halloween.  Both Piper and Polly look pretty pleased about that decision. 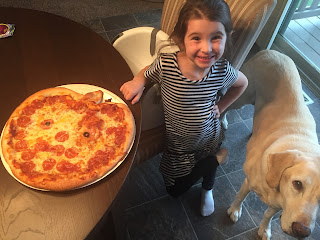 And off they went.  You can sure tell it was cold there. 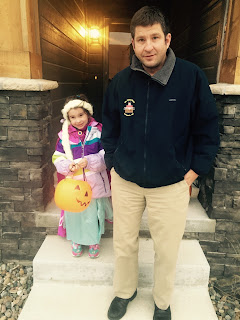 Poor Mandy has been REALLY,  REALLY sick all week with Influenza A.  She tested positive and has been put on Tamiflu.  She's still very sick but thinks she's a little better today.  Last week at work she had patients who tested positive so I'm pretty sure that's where she got it.  And yes, she did have her flu shot.  Piper has spent the last two nights at Brad's parents house, trying to keep her away from it.

I went to Weight Watchers and had gained .2 lbs. yesterday, so what did I do?  I came home and baked banana bread!  What is wrong with that picture?  Ha! Here it is in the mixer just before adding the nuts.  This was my Grandmother's recipe. I still have it on the card I wrote it on when I was about 10 years old.  I never met my Mom's mom.  She passed away when my Mom was only 14.  Then my Mom died when I was only 29.  I miss her still and even today will forget and pick up the phone to call her.  She's been gone 28 years.  I can hardly believe it.  We lost my Dad shortly afterwards.  It was really a traumatic time in my life.  Whoa!  Where did that all come from.  On with the banana bread.  :-) 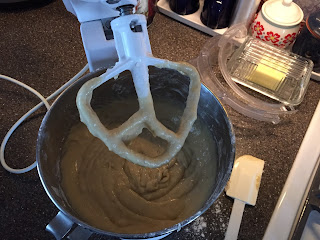 Oh yum!  One loaf was eaten last night at Bible study.  I think I'm going to take the other loaf to our new neighbors this afternoon.  Get it out of the house! 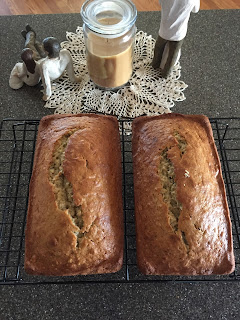 Last night I was driving home from dinner and saw the moon.  This picture isn't the best because
I took it out of the windshield.  The clouds were flying across the sky and the moon was huge and bright.  It really looked a bit spooky.  It would have been appropriate a few days earlier! 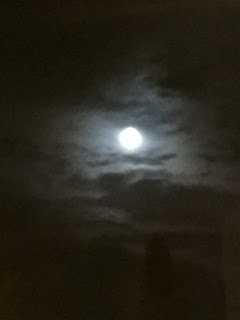 I had my mammogram and bone density scan earlier today.  I'm SO glad to have that done for another year.  They are never fun, but with the pacemaker it really is pretty painful.  The top plate squishes down right on top of the pacemaker.  Ouch!  Oh well, I'm done and I'm glad.  Ladies, make sure you take care of yourself and get those scans done.  That's my public service announcement for the day. :-)

I have laundry going and I'm going to watch some knitting podcasts and fold and iron clothes.  Tonight we're supposed to drive to Deer Park, WA and take my cousin and his wife out for dinner.  They are north of us by only about 20 miles, but they got several inches of snow last night.  I'm hoping for clear roads for the drive.  It's always good to get together with Jack and Barbara but we don't do it very often.  Life gets so busy.

Dennis' biopsy reports came back and everything was negative.  Wonderful news!  He has to repeat the endoscopy in two years but right now all is clear.  Thank you from the bottom of my heart for all of the prayers and well wishes.

I hope you all have a lovely weekend my friends.