I'm still here, but so is Alex!

And so I'm not spending much time online at all.  I hope you all understand. We've been having a lot of fun.  The first picture below was taken at a local hamburger place just a mile or two from our trailer at the lake.  We were on our way to spend the afternoon out there on Tuesday and stopped for lunch.  Hamburgers and chocolate shakes.  Yum!  Fifi had just flown in the day before from Tokyo to spend about a week and a half with us.  Poor girl.  The line in customs was so long she missed her connection from Seattle  to Spokane.  She doesn't speak much English at all so it was very disconcerting for her.  Alex was texting and calling her trying to get the logistics taken care of.  She finally arrived about 3 hours later than scheduled. 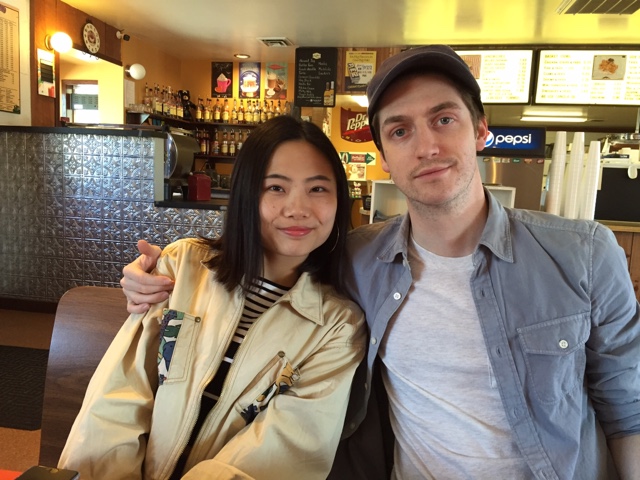 Alex wanted to take her down to Riverfront Park where we were last week with Jamie.  She's never seen falls like ours before.  The water roaring by surprised her.  Here I am with two of my boys.  I made it all the way down the stairs and back up this time!  Yippee!  See Alex's air cast on his left foot?  I made him use crutches for this hike. Once a Mom, always a Mom!!!  My shoes aren't very cute, but they are Keen's and great for walking a lot. 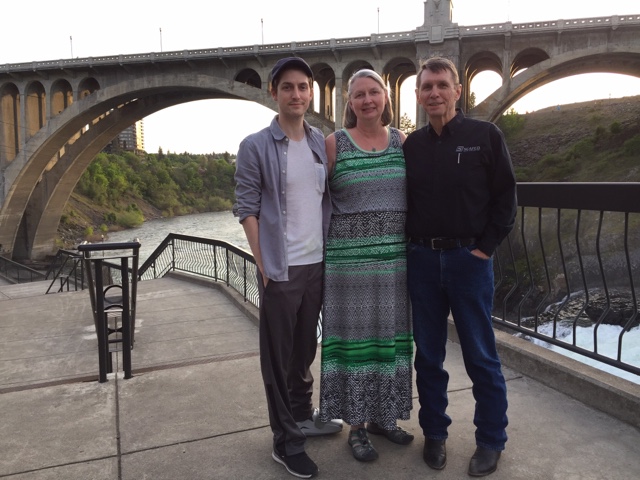 Proof.  There are the crutches.  He's doing fantastic.  He went to the doctor for a one week check yesterday.  She was very pleased.  He doesn't have to use crutches anymore and can try walking with a regular shoe on for short periods of time.  He goes back next Wednesday to get the stitches out and then he and Fifi fly home to Tokyo on Thursday.  I'm really going to miss them.  I told him yesterday when we were talking that no matter how old he is, he'll always be my baby and I miss him.  I think as he gets older he's finally understanding that more and he's missing us too. 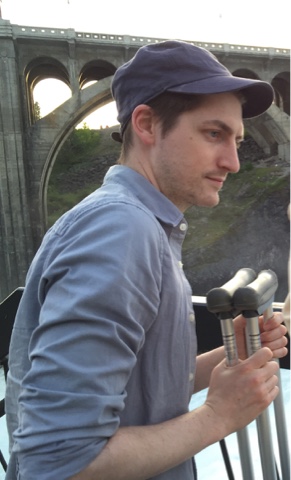 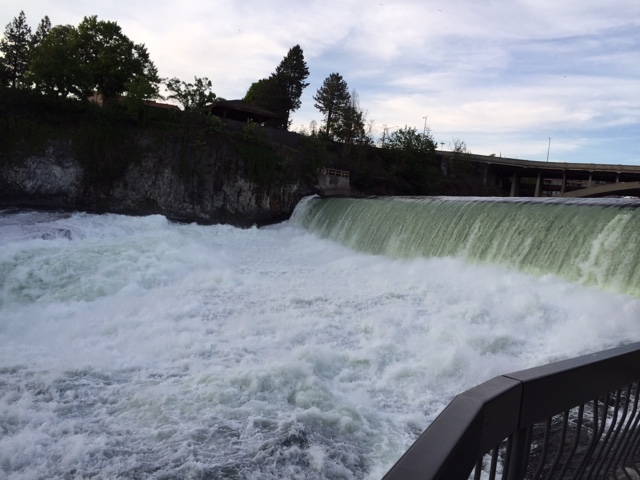 That's a LOT of water.  Cold snowmelt straight from the mountains. 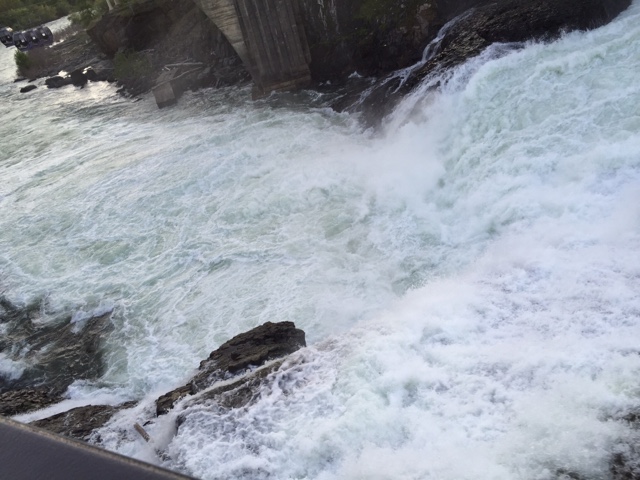 This is our courthouse.  It's very blurry because I was zooming in with my iPhone and it was well over 2 miles away.  It looks like a castle.  You can't see the bottom floors very well in this picture.  Our little girls always want to visit the castle, they think there will be a princess living there. :-) 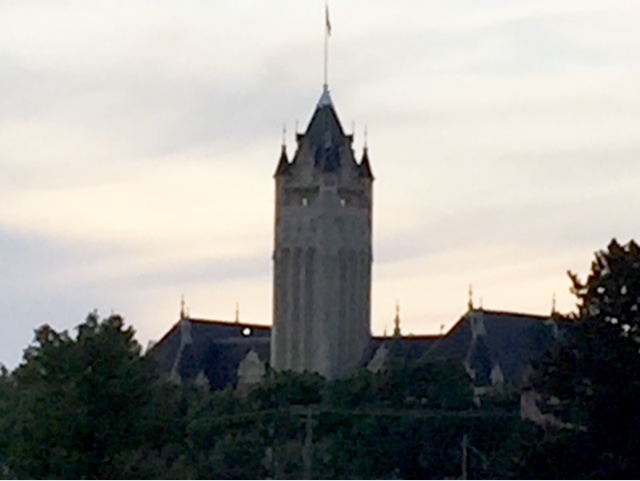 Here's my Prince Charming.  Seriously, this guy gets better looking every year.  How does that work, because I am certainly going downhill! 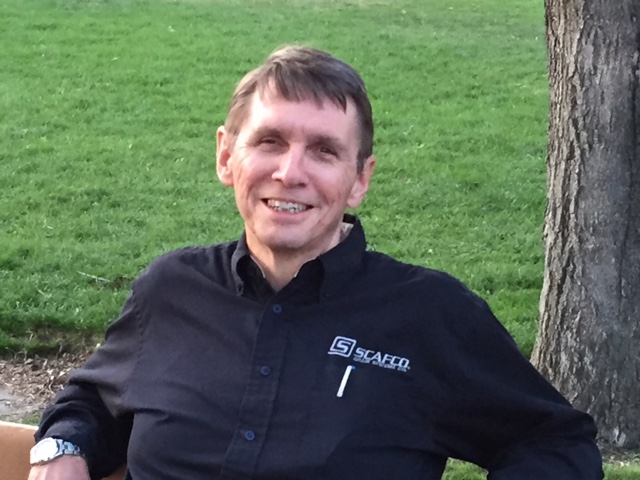 I liked this picture.  Fifi is a photographer for Amazon Japan and takes amazing pictures. Alex also does photography for several business in Tokyo in his "spare" time.  They are both good with cameras. 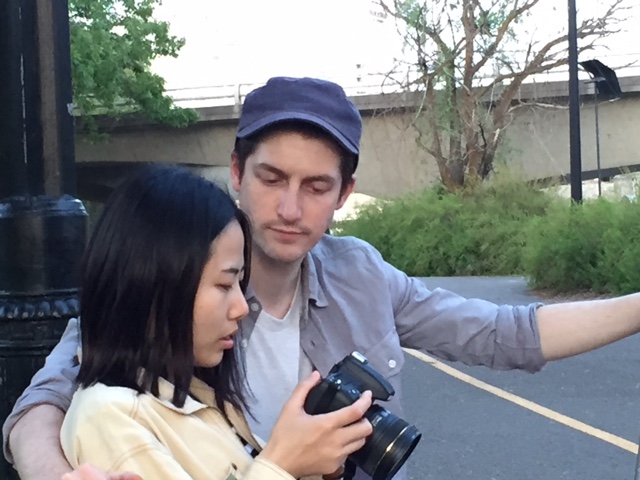 You saw the inside of the carousel in my last post with Kyleigh and Caleb.  Here's the outside of the building.  I love the reflection on the river as the sun was setting. 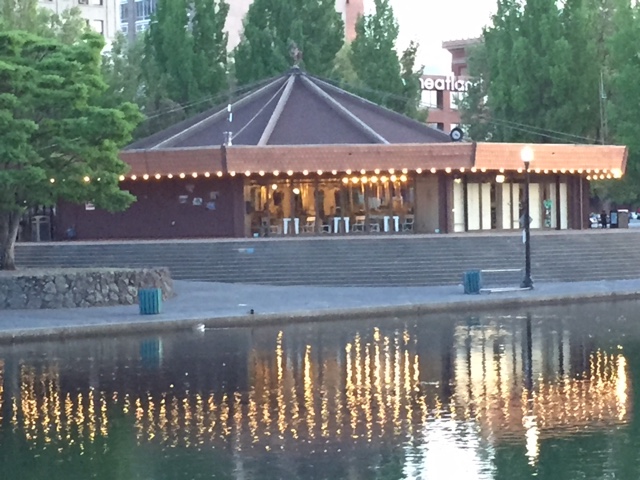 Lots of ducks swimming by use as we walked. 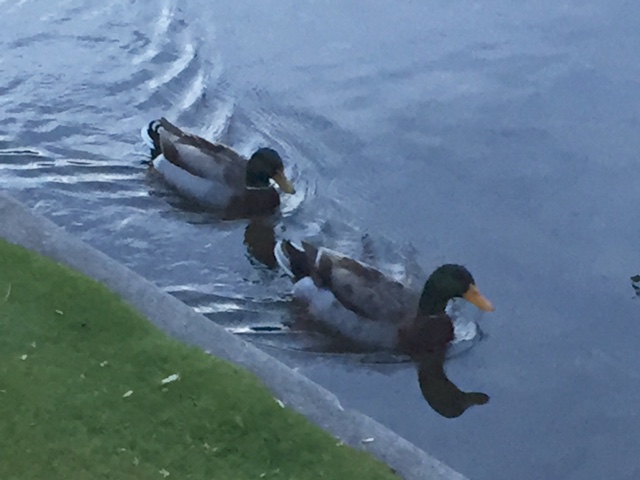 Last night we mowed the grass and trimmed bushes.  Fifi has never seen anyone cutting grass like we do so she wanted to try it.  She did great!  She mowed about half the backyard.  Then she saw our woodpile and wanted to try to chop some wood.  She did try but just couldn't get enough "umph" behind the axe.  So Dennis showed her how it's done and split several rounds.  He may not be 30 anymore, but he's still "got it".  :-). I was taking pictures from up on the deck. 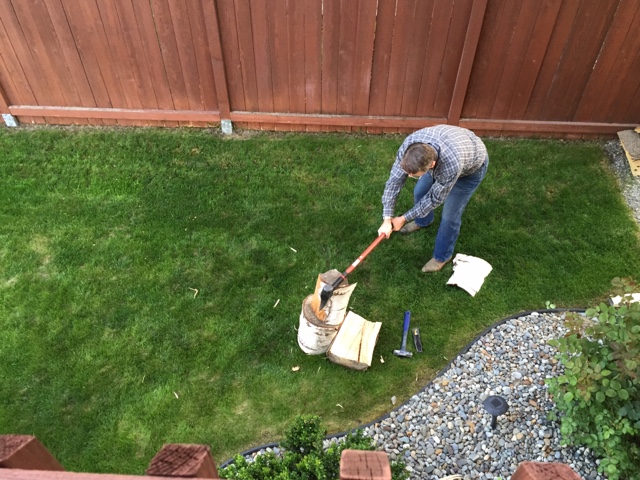 She was thrilled!  America has been chock full of surprises for this girl who was born and raised in Shanghai, China and has lived in Japan for 7 years.  She's never lived anywhere except Shanghai and Tokyo, two of the biggest cities in the world.  Spokane is a culture shock for sure, but she seems to be enjoying every minute. 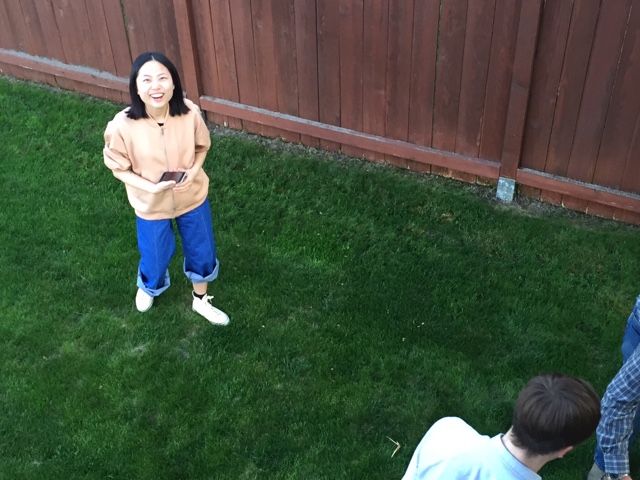 I got this package of socks mini's today from a friend on Ravelry.  Many of us are making cozy memory blankets with our leftover sock yarn.  It only takes about 3-4 grams to make a square for the blanket.  But, I haven't made enough socks to have enough yarn to make very many different squares and here's where the fun comes in.  We've been swapping yarn!  We can send yarn to other Ravelers and they send different kinds to each of us.  So much fun!  I don't have any sock yarn to share though so Debbie was generous enough to send me this package not expecting anything in return.  However, I surprised her with a knitted spa cloth and a double pointed needle holder, (shown in the picture below.) She loved both, at least that was what she was kind enough to tell me.  :-) 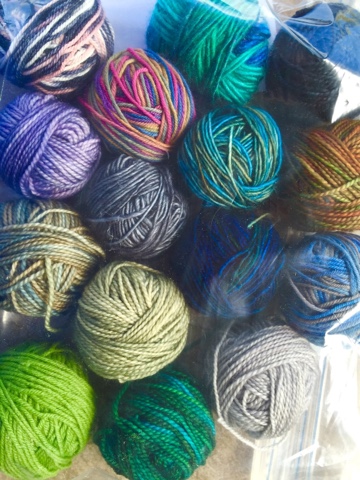 Last weekend while Alex was laid up in bed I took the opportunity to make two new small project bags and more DPN holders.  Taci, (over on my sidebar), has convinced me to make some to sell because they aren't readily available anywhere.  She said she uses the one I gave her all of the time and is going to tell her knitting group friends.  Isn't that sweet?  So I did buy more fabric today, (these particular fabrics were sold out, but I found some other cute ones.  I cut them out this morning and will try to sew them up in the next few days.  If anyone is interested, just give me a shout and I'll email or text you a picture when I have them done so you can choose.  I'm thinking $9.00 plus postage for a DPN holder.  My project bags are NOT good enough to sell.  I wouldn't inflict them on you!  Ha!  I don't want to make this blog a selling thing, but before I consider an Etsy shop I wanted to see if anyone is interested like Taci believes they will be.  I'm so computer illiterate that the thought of opening an Etsy shop gives me chills! 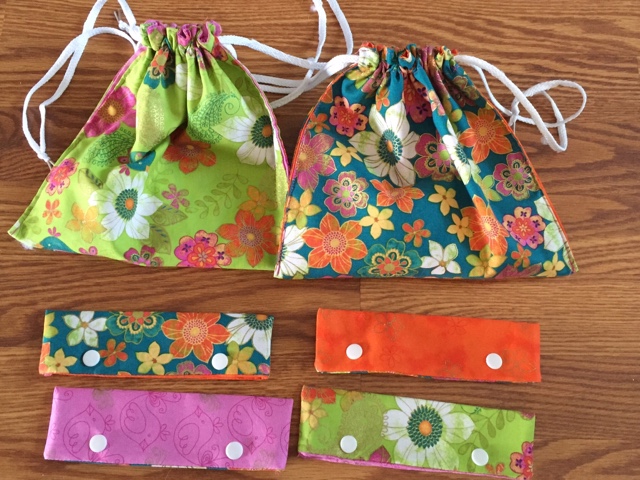 Mandy just texted me this picture of Miss Piper this morning.  They went to place called Storyville today that is north of Baltimore.  It had an entire village of shops and houses.  Piper shopped at the grocery store and then rang up her purchases.  Then she played in the houses.  Mandy said she had a wonderful time.  Grandma sure misses this little girl. 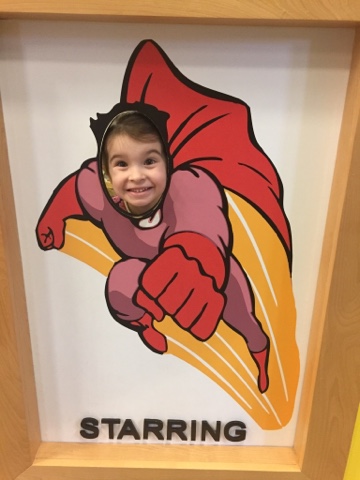 I know you've all been so sweet asking me about my MRI.  It was an awful experience.  Suffice it to say, during the MRI in January they shut my pacemaker off completely and I did great.  This one they turned it to 50 beats per minutes pacing from the bottom of my heart and I felt like I was dying.  Literally.  Once they turned it back to my settings though I was fine, although exhausted for several days and light headed again for several days.  The MRI showed no problems though, which was very good.  Yesterday was my cardiologist visit and he is tweaking my medications because I gained so much weight over the winter.  He said two of my meds can cause unexplained weight gain, so he want's me off of them if possible.  He also told me to get a Fitbit and try to get 10,000 steps/five miles a day to strengthen my heart.  I think that will be easy enough at the lake, but at home, not so easy.  These were the meds that helped with the tachycardia though, so I'm hoping that doesn't make a reappearance.  I've been feeling so much better the last few weeks, (with the exception of the MRI stuff,) that I hate to mess with anything.
Well, I've promised Alex and Fifi my homemade noodles and chicken for dinner so I better get cracking.  She wanted to go shopping at the mall so that's where they are right now.  She is going to be surprised how small our mall is compared to Tokyo's.  I think it's fairly normal sized for most malls here in the U.S., but compared to what she's used to I think it might be a disappointment.
I hope you all have a wonderful day and are enjoying your week.  I'm trying to keep up with reading your blogs and commenting but if I've missed yours I sincerely apologize.
"And do not forget to do good ad to share with others, for with such sacrifices God is pleased." Hebrews 13:16
Blessings always,
Betsy
Posted by Betsy at 3:17:00 PM