Happy Saturday.  Dennis and I got up bright and early this morning and he took me out to breakfast.  Then we began the 6 hour drive of 360 miles to Portland Oregon to have dinner tonight with Gracie, Teresa and Becky at Tad's Chick N'Dump.  If you're a reader of Teresa's blog, you know all about Tad's.  The food there is delicious!
Would you like to join us on our drive?  The first half of the trip is through the high desert of Eastern Washington and is mainly sagebrush and canyons.  Imagine the films of the Wild West...that's Eastern Washington with a few farm fields added in for good measure.  So we won't daudle with those pictures.  Now the part of E. Washington we live in is mountainous and in the foothills of the mountains so it doesn't look like this.
Picking up just after we crossed into eastern Oregon and began our westward journey towards Portland, we saw Mt. Hood about 160 miles away!  Can you see it there very faintly?  It looks as though it has a new blanket of snow on it from storms earlier this week.  Still lots of sagebrush... 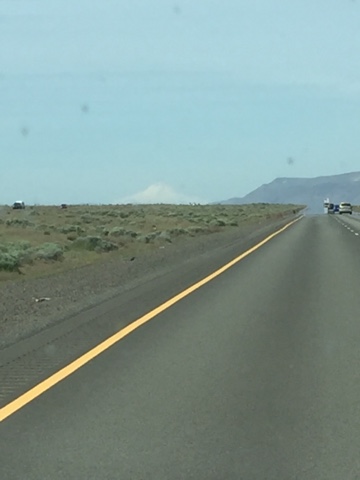 Yay!  We made it to the Columbia River.  That's Washington on the right with Mt. Hood just to the left of center. 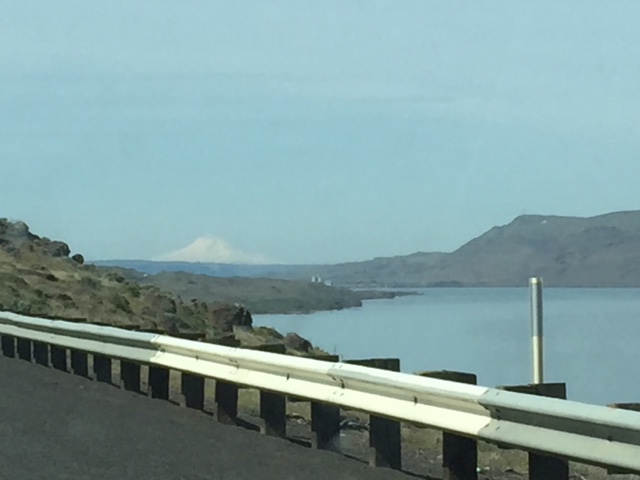 Down, down, down into the river gorge. 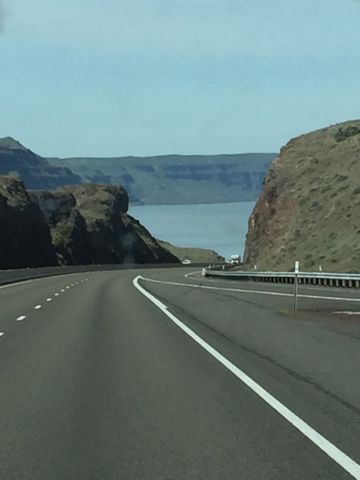 Still decending from the high plateau of desert to the beautiful river's edge. 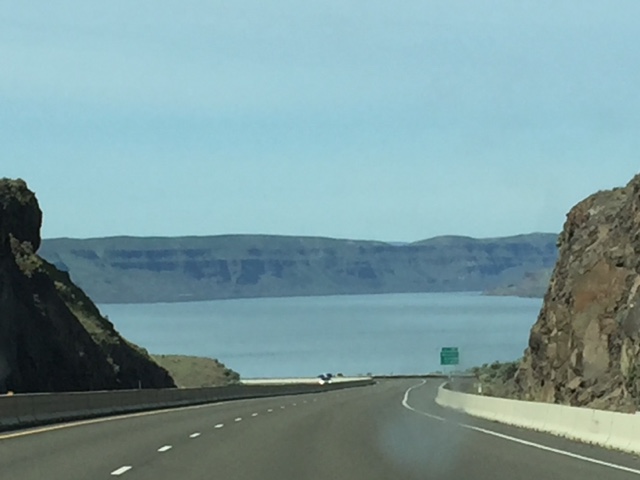 Blalock Canyon.  There are even a few dead-end canyons around here. Just like in the movies where they would round up the cattle! 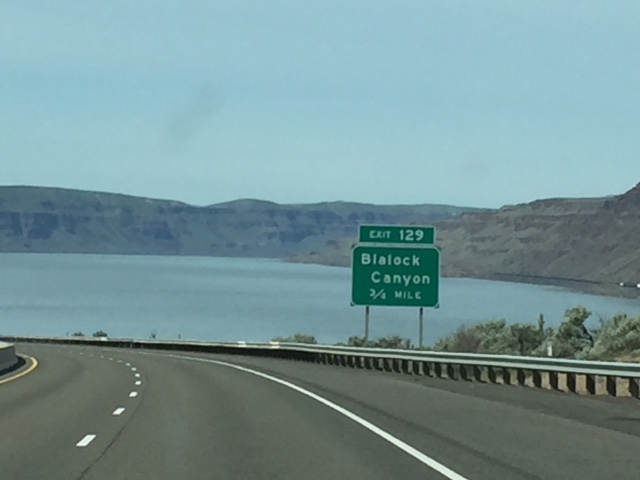 Closer to Mt. Hood.  Gorgeous.  Sorry about the bug splat on the winshield. Yuck!  I made sure to clean the window when we stopped for gas little later. 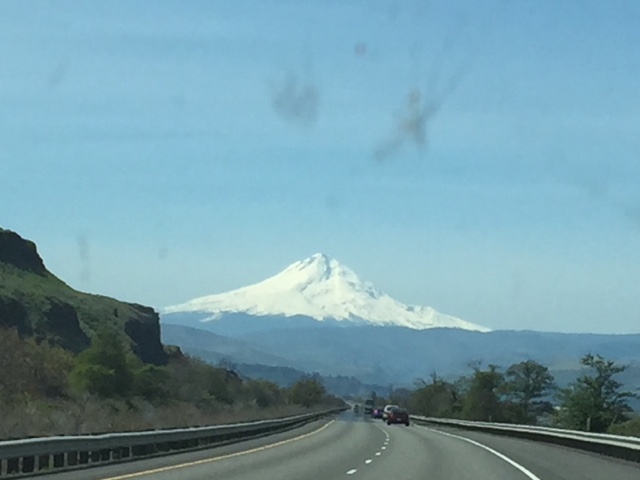 Notice the green that's appearing along the road instead of sagebrush? 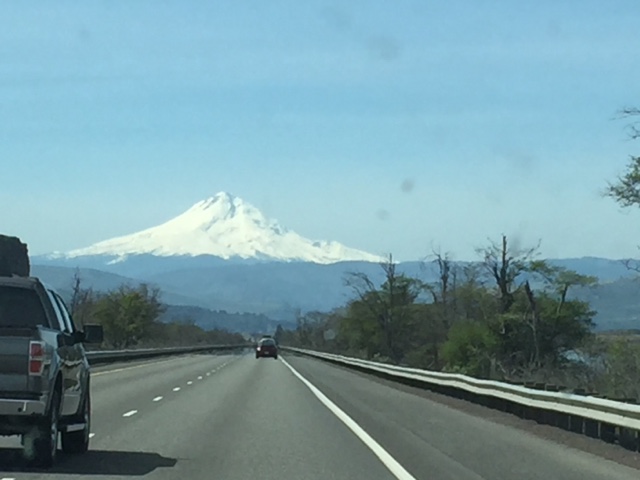 Ahhhh!  The beautiful part of the drive.  Many people like the wild desert scenery during the drive, but I prefer the trees and green hills and waterfalls. 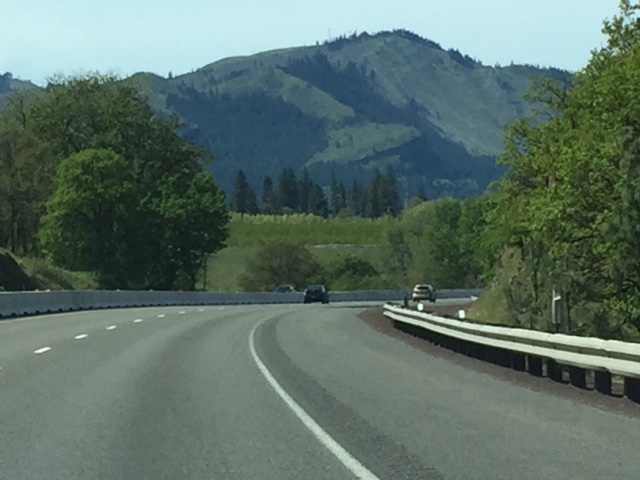 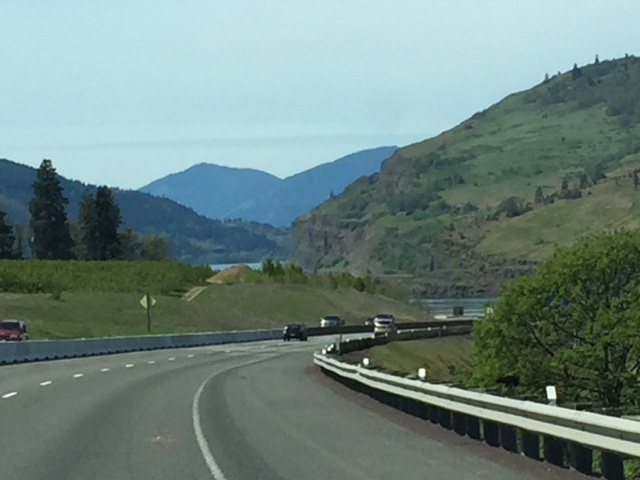 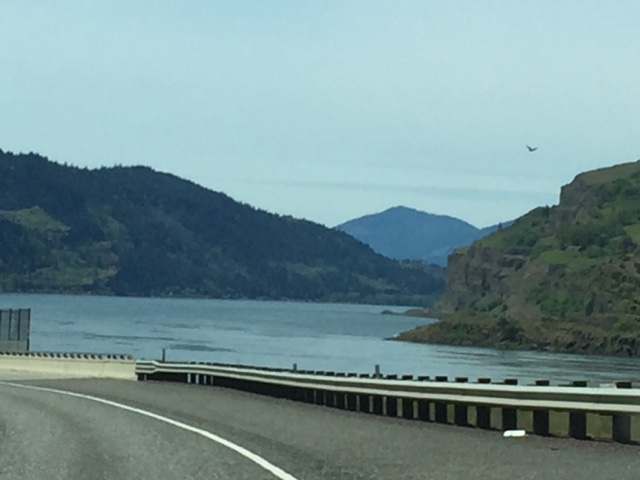 Pretty island in the middle of the Columbia.  I'm sure Teresa knows it's name, but I don't. 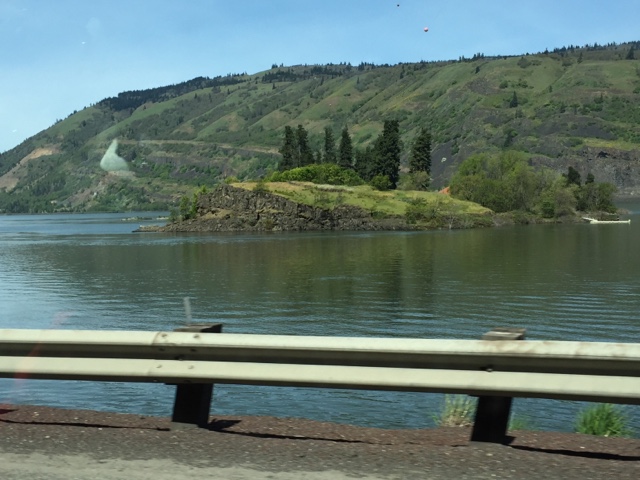 The best I could do for Vista House.  Sorry about that.  Cars were in the way whenever I tried to snap a picture.  There was also a new sail boat on the river but couldn't get a picture of it either. 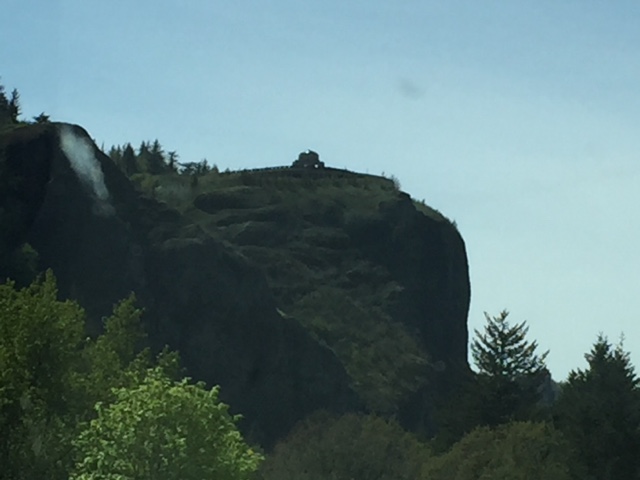 The plan was to stop at Multnomah Falls because Dennis and I both love it and stop whenever we have time on our drives here.  However, today is a beautiful, beautiful spring Saturday and there was not one parking place to be had.  Cars were parked up and down the road too.  So we just drove on and waved toward Teresa's house as we went past her road exit!  We should have stopped and taken over her Saturday afternoon! Ha!
My knitting during the trip.  I didn't knit as much as I planned to because I was watching the pretty view most of the time. 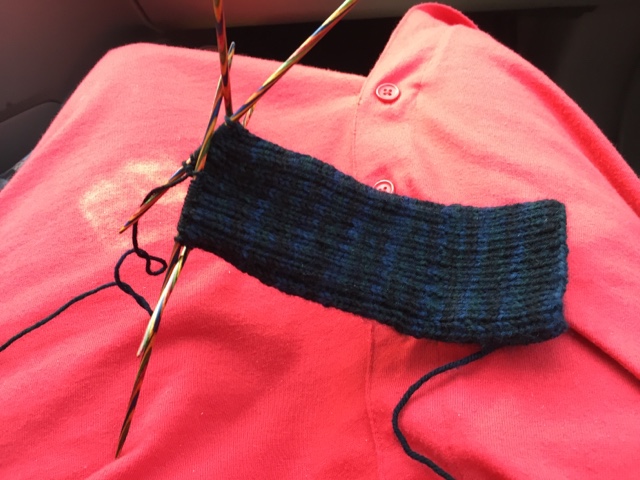 This is the view from our hotel room window.  Isn't it pretty?  It's at the edge of the river gorge in Troutdale, Oregon.  They let us check in an hour early and we're resting up for our wild night with the girls tonight.  Teresa and Becky are bringing their husbands too, so it's sure to be a grand time, 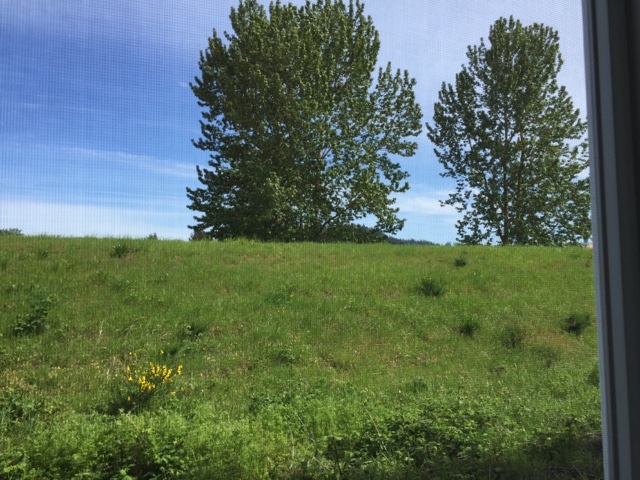 For those of you who have asked, our son is just fine after the recent earthquakes in Japan.  They were mostly in the southern part of the country.  Right now he is up in Hirosaki in the northern part where he just bought a house yesterday!
This is NOT our son, but his business partner Michael. We were face-timing last night and I took some screen shots as Alex and Michael were showing us around.  He will continue to live and work in Tokyo for a few months until he gets some work done on the house.  It is a historical house with the tatami mat floors.  SIX bedrooms!  He's determined that we will move to Japan with him when Dennis retires.  He's not giving up although we keep telling him it's unlikely at best.  :-). There is a lot of land with the house. 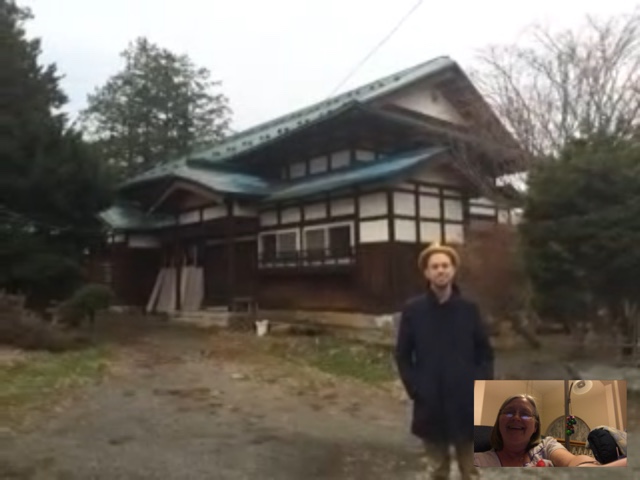 This is equivalent of our grain bins.  They stored rice and other grains here in years gone by.  Michael is playing "Vanna White" for me in the picture.  Dennis, Mandy and I have actually visited this little town a few years ago for the cherry blossom festival at the castle.  It's a very quiet little town in the countryside.  A far cry from Tokyo and I think Alex will like it much more.  (Do you see me in the bottom of the screenshot?) 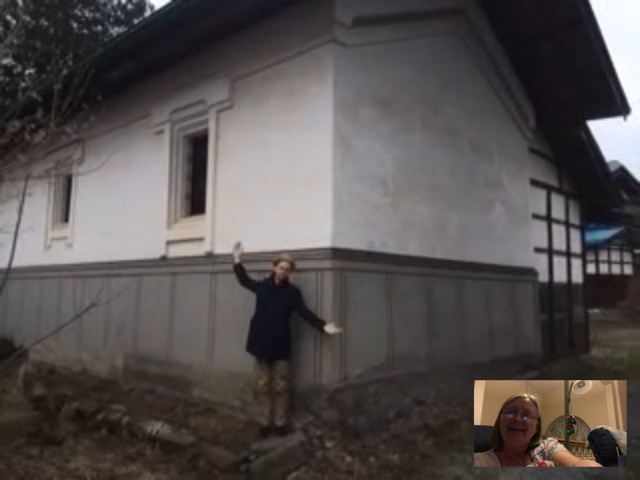 Another hour or so and we'll be off to meet the girls.  I'm so excited!  I'm sure there will be pictures to share.  I hope you're having a lovely Saturday.
Blessings,
Betsy
Posted by Betsy at 2:58:00 PM