It's a cool morning!

We've had a couple of chilly mornings here in the Inland Northwest and I'm afraid it means fall is on it's way. Well, actually I think it officially arrives on Sunday, although I'm hoping for a few more nice weeks before closing up the trailer for the winter. But first I'll be off to Portland next week for little Miss Piper's first birthday! Can you believe it's been a year? I'm staying in Portland to keep her home from daycare for a week to play with Grandma, so I won't be home until the first weekend in October. I'm also having lunch with Gracie, Taci and Teresa! Yippee! Hubby is driving with me and flying home so he can work all week and then flying back to Portland for the next weekend before we drive home. I love having him with me on the long drives. It's so much more fun with him along, (and the extra knitting time is nice too, with no driving!)

Well, the mittens are coming right along with 10 pair being finished this week. 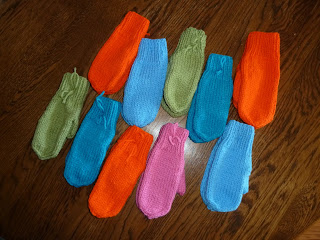 That brings the grand total to 27 pairs of mittens so far! Not too bad but I'm afraid 100 pair by the end of October was a little ambitious! I know that even if I don't have 100 pair by then, I can keep knitting and give them to the school as I finish them. I'm sure the need for them will go on all winter. 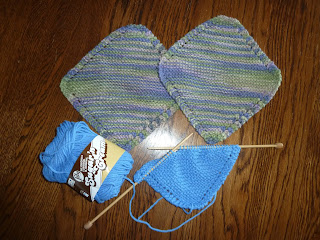 On top of that, the nurse who took care of me when I had my nuclear treadmill called and asked if I would make her 20 dishcloths for gifts! She isn't in a huge hurry, so that has become my project that I keep in my purse. I have 2 1/2 cloths done so far. The mittens use all kinds of little things, stitch markers, a ruler, stitch holders, scissors, tapestry needle and two different sizes of knitting needles so there is a lot to carry around and take a chance of losing. I already lost my little pair of school scissors that have traveled a lot with me. They only cost $.99, but they pass all the airline regulations. They've been to Japan twice, England, and France. Now they're gone. I had them last week when I had my doctors appointment, but not when I got home. I ran lots of errands so who knows where they are now! Oh, well! It was time to replace them, they were getting dull with use, but I'm a sentimental gal! :-) Anyway, the dishcloths are easier to tote around without losing pieces.

I will keep knitting mittens as my main project, but with losing a week playing with Piper it may set me behind a bit. I'm not giving up playing with her though ladies. Grandma just can't do that! 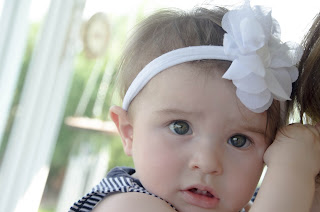 Just look at that face. I'll have my arms around her in exactly 1 week and 1 day! She's taking a few steps on her own too! Grandma got to see them when I was face-timing with them earlier this week. I love facetime. It makes it so much easier when I see her. She remembers exactly who I am.

I also did a little decorating for the season when I came home from the lake yesterday. I don't do much anymore, but a few things to put me into the fall mood. 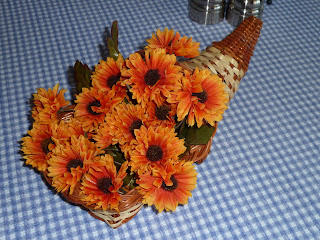 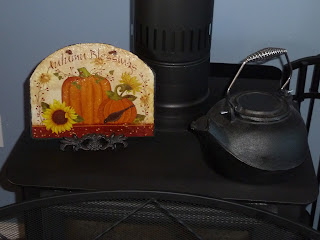 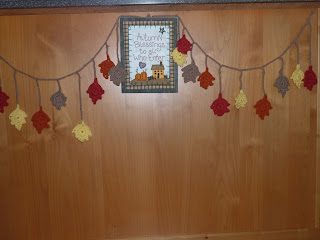 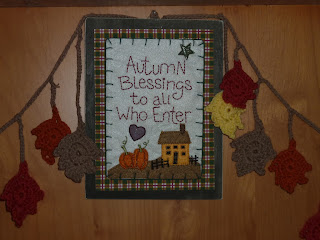 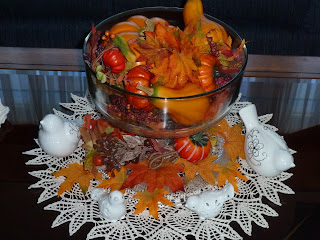 I crocheted the leaf garland this summer. I'm not super happy with the way it turned out, but it's okay. The bowl on the coffee table is actually my cake stand and cover, turned upside down. I find it works well for decorating too, since I don't bake many cakes now that the kids are gone.

I've been running errands all morning long. I also trimmed all of the bushes in the backyard. Last night Hubby mowed while I power washed the house and windows. We had a terrible storm go through on Sunday that left a layer of dirt on everything. In light of what Colorado and now Mexico is going through though, I'm not complaining. Anyway, I also ran errands this morning and have laundry going. Now I need to make zucchini brownies for Bible study tonight and also make a couple of batches of laundry detergent. I keep Mandy supplied in it too so I want to take her more next week. My acupuncturist also tried my "recipe" and loves it too. She's a jogger and can't believe how it gets the sweaty odors out of clothing.

Okay, my friends. I'm off to get more work done. Have a lovely day and I'll be back soon. Hopefully with more mittens.