Where has the time gone? Who would have ever believed that a puppy could make so much work and exhaust two grown people!? A puppy, a birthday party and a trip. It has been a busy week!
Dennis‘s mom turned 85 on Saturday. We were planning to have just a small get together of immediate family that we knew were all vaccinated. However, several more people came and it end up being about 25 people at various times! I believe everyone was vaccinated except Piper and her two younger cousins. They played outside or downstairs with the puppies most of the time. Most people stayed outside the entire time except when they were fixing their plates and then they came inside two or three people at a time. I think everyone was conscious and was trying to be careful. I think, I hope, I pray, that all is well. It’s been three days and I haven’t heard anything from anyone and we are all fine. We have been so careful for the last year and a half but who knows how many more birthdays will have with her and she was excited to have everyone there. 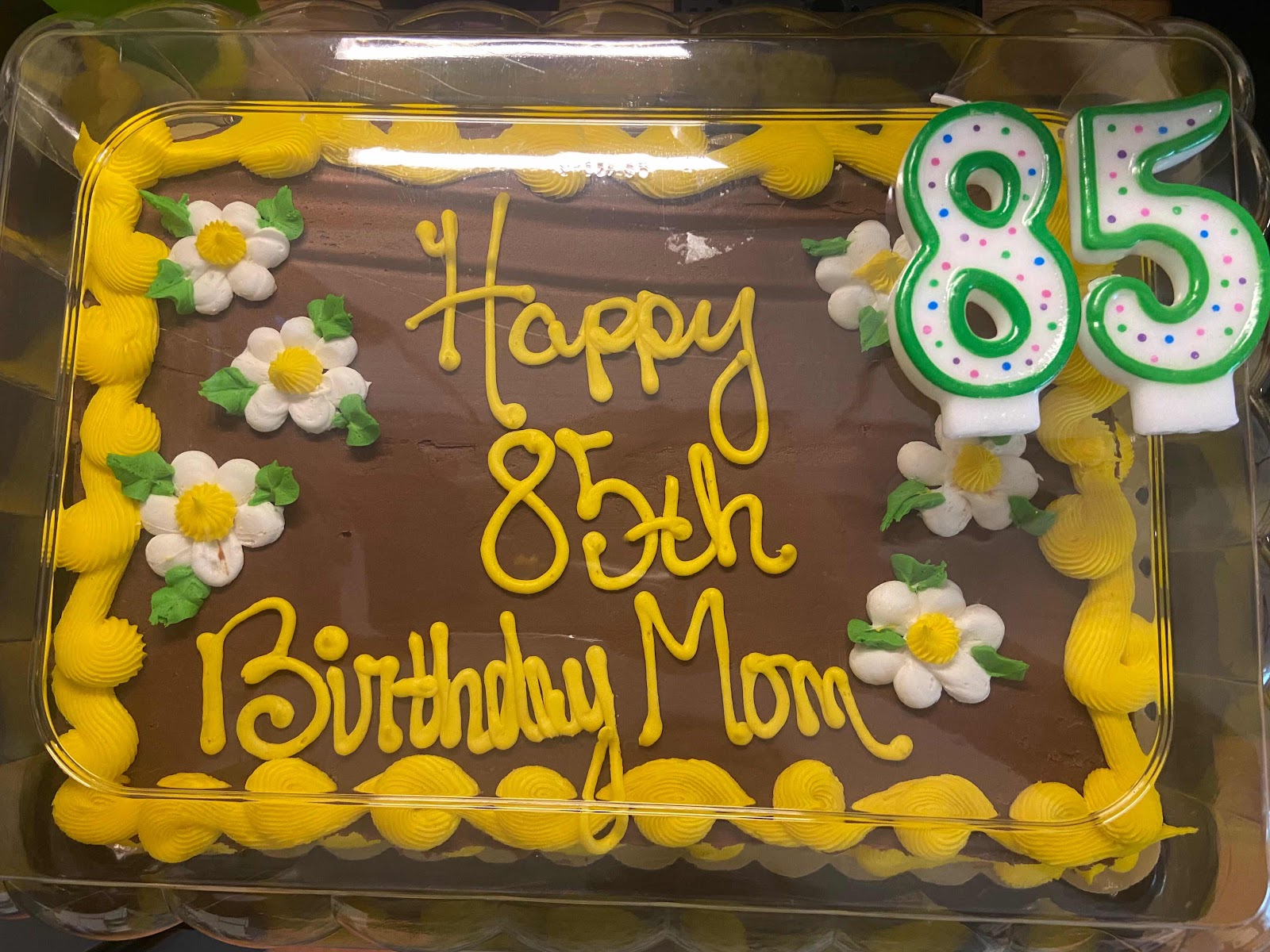 Dennis and I provided pork chops, sausages, deviled eggs, fruit salad, Wichita potatoes, homemade pickles, drinks, cake and cupcakes. Most other people brought something too, including potato salad, watermelon, macaroni and cheese, lots of chips, and a relish tray. After two years of not seeing anyone it was nice and as I said, all of the adults that were here were vaccinated which eases my mind somewhat.
We bought mom a Keurig coffee maker, a box of her favorite coffee and a carousel to keep the k-cups in. She really likes it and it was nice to get something that we knew she would actually use and enjoy.
In the photo below you see mom, who was completely surprised or she would have been dressed up. She thought she was just coming over to visit us for a while in our backyard. Next to her is her brother Al who came from Minneapolis for the weekend. Al is 89. Behind them you see Al’s son Ron who lives in Reno. He has been visiting his family in Minnesota for two weeks. It was wonderful to see Ron because it had been at least 35 years since either Dennis or I saw him. He looks exactly the same except a few gray hairs!😂 Lots of other family members were also there including Ron’s sister Janet from Minnesota. Five of Mom‘s grandchildren who live in Omaha were here, along with my sister, my niece Chaela and her husband Tim. Alex called as he was walking through Queens Park and sang happy birthday to her over FaceTime. She was thrilled. Honestly, I still don’t know how we pulled off the surprise. I wasn’t at her house much Thursday or Friday because I was cooking most of the time and getting everything ready for the party and since I’m usually there for a big chunk of every day, I was sure she knew something was up. 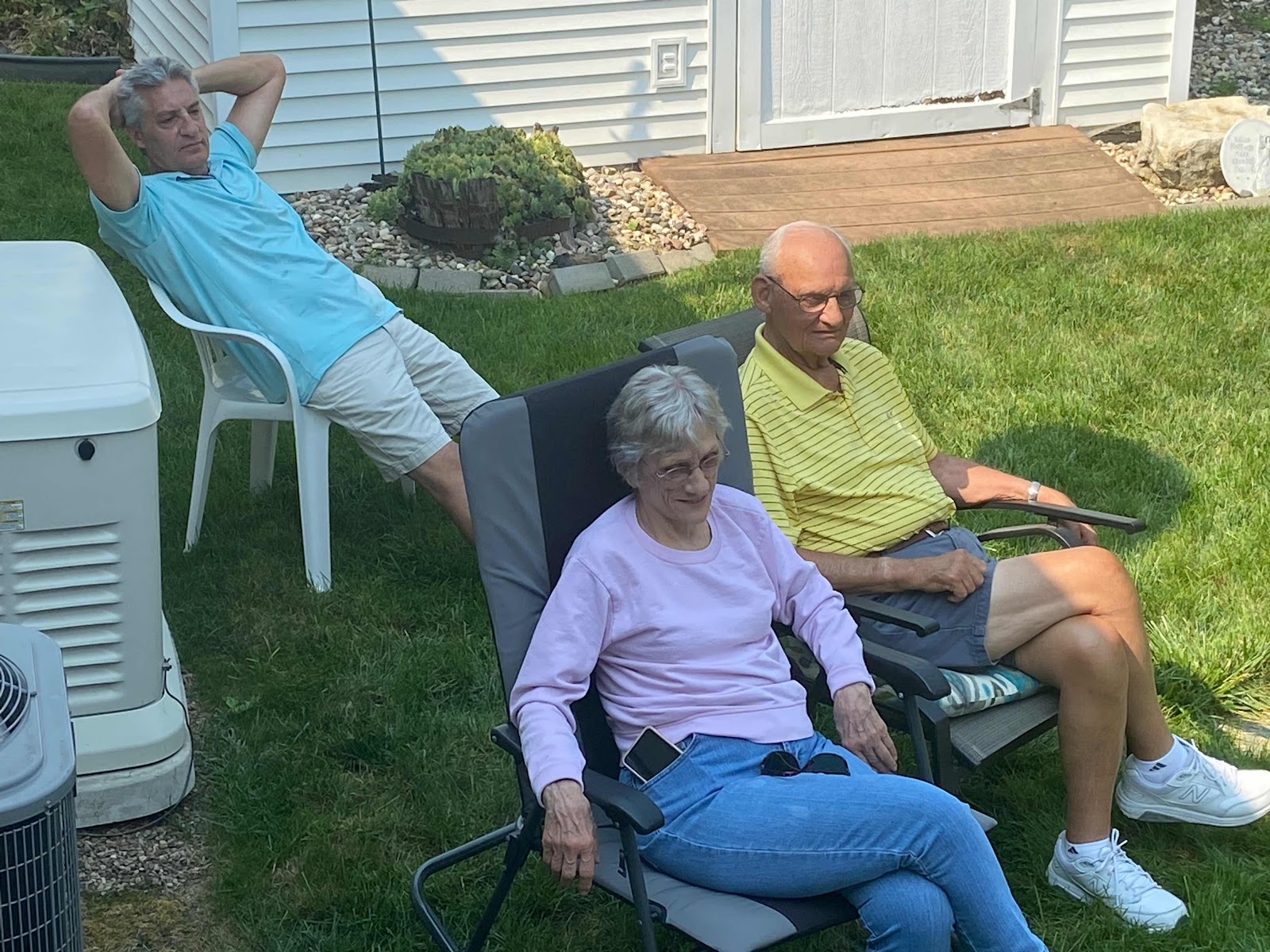 Mandy and Dennis were deep in conversation. 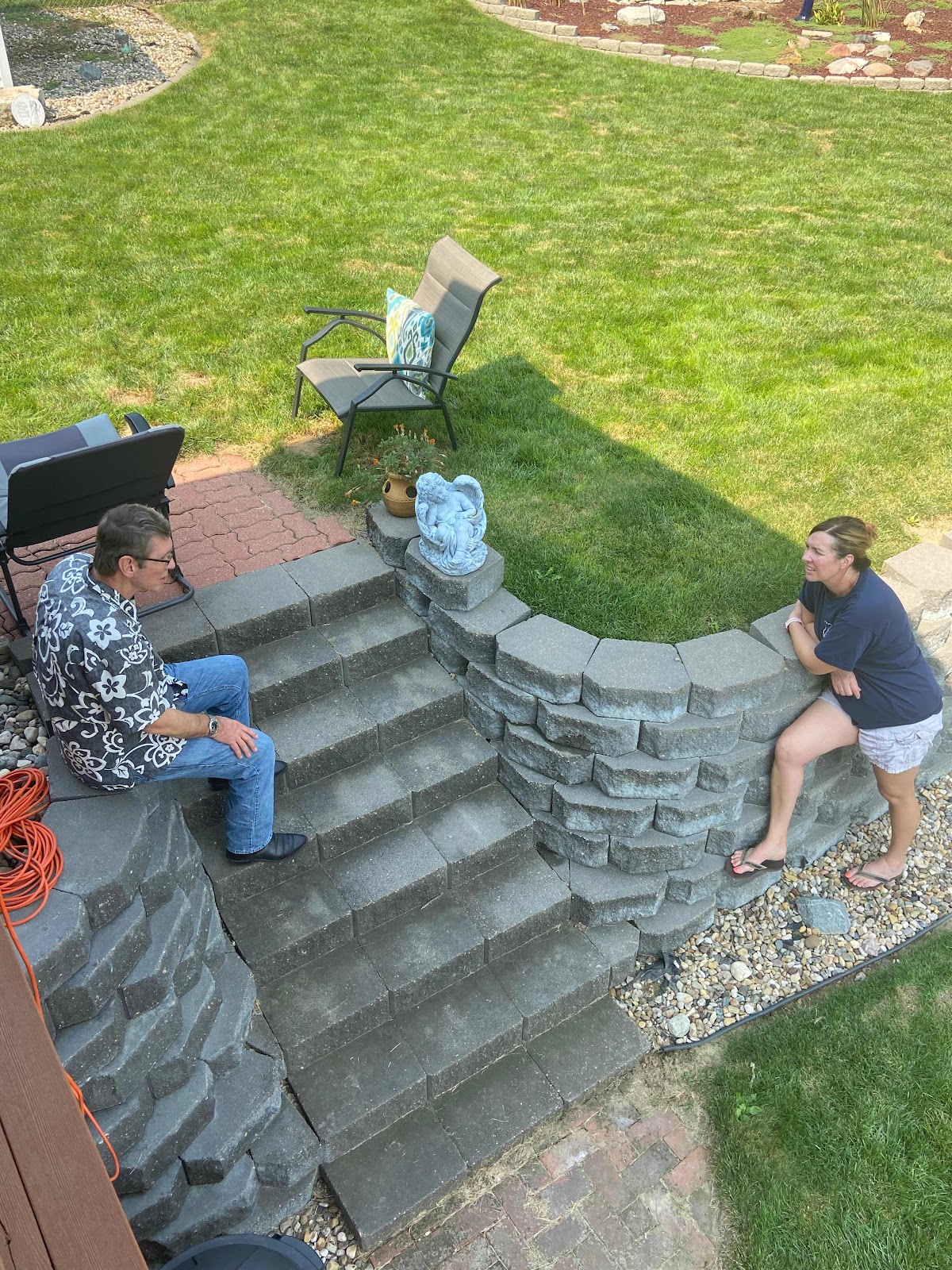 The puppies were having a wonderful time playing together in the family room. These two sure love each other. I think Lizzie looks like a miniature golden retriever. 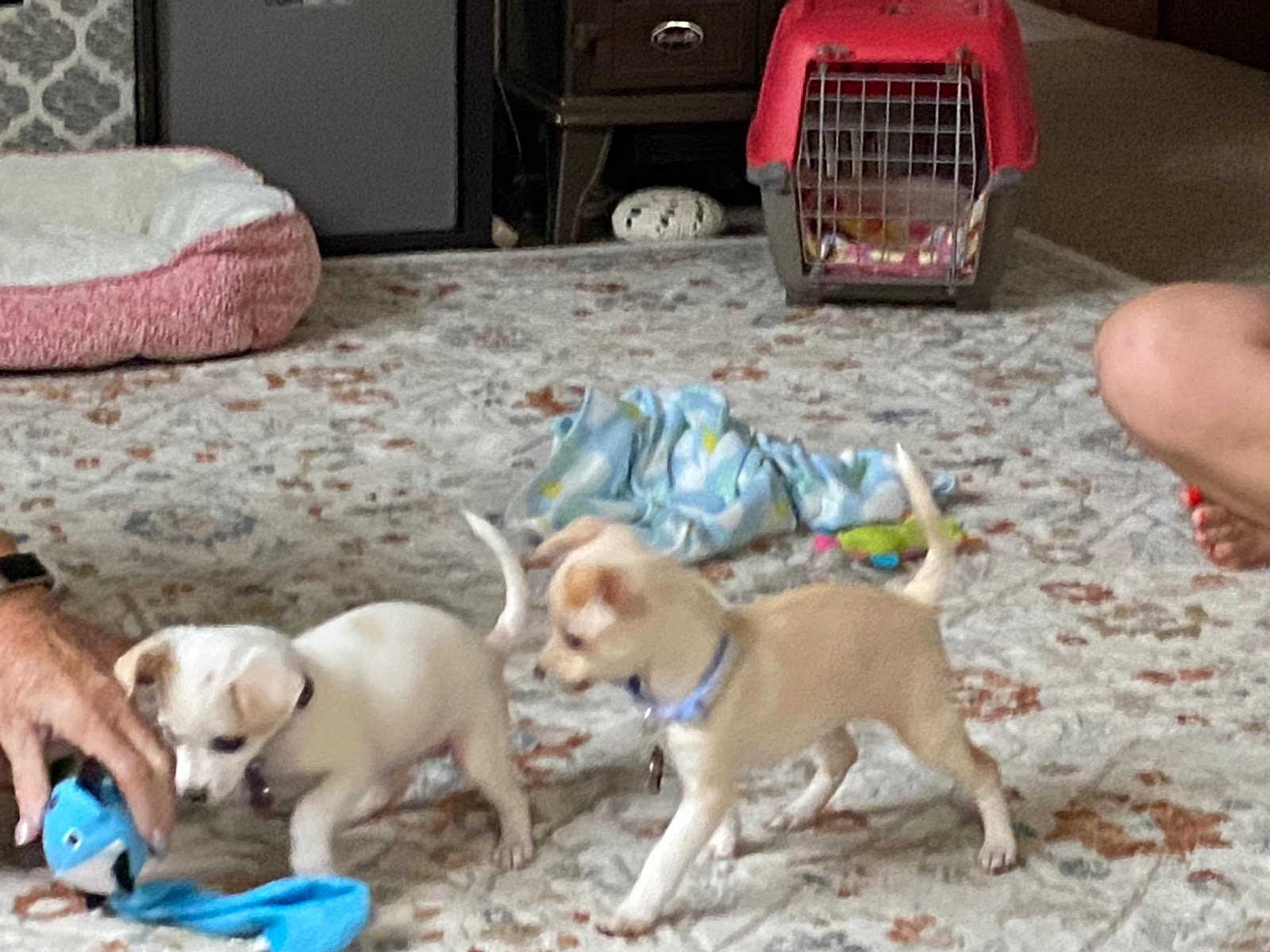 The trip I mentioned was that Dennis left Sunday early afternoon for Spokane and is actually on his way back home right now. His flight lands in a couple of hours at about 2:00 here in Omaha. Sunday night he was able to stop and visit with Neal and Jenny. Last night he had dinner at Arby’s with Larry and Nita and then they all went over to Paul and Lori’s to see the puppy. Can you believe that that furball Nita is holding is the same little Lizzie that I showed you a few weeks ago? She has sure grown hasn’t she? 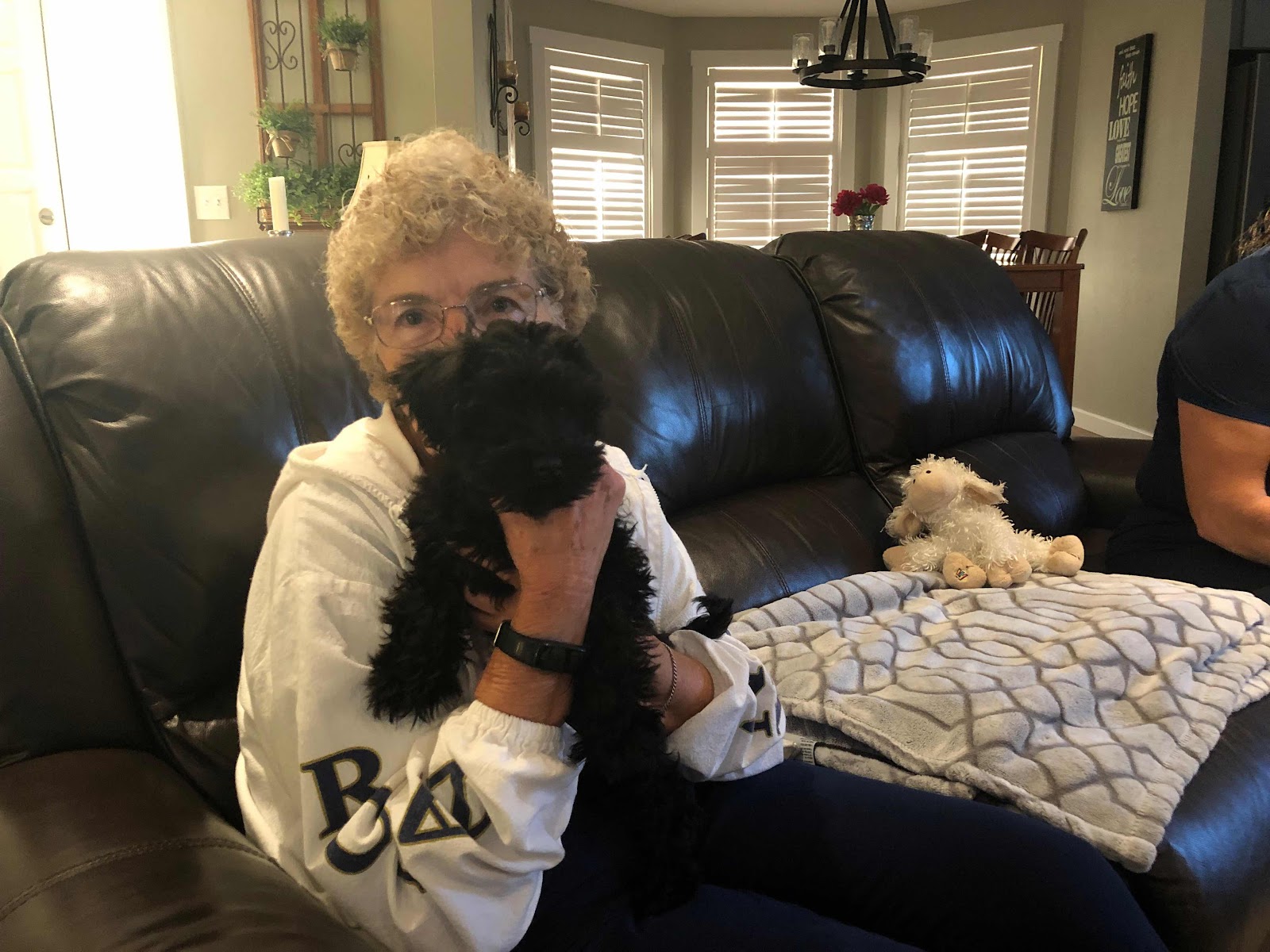 I finally finished the baby blanket. I don’t remember it ever taking me this long to make a baby blanket. I guess that’s what happens when there’s a puppy in the house. It’s like having a two-year-old. I used six skeins of Yarn Bee Fresco Fiber; three each of the colorways eggshell and linen. The fiber content in this yarn is 59% cotton 36% acrylic and 5% other fibers. It is super soft and a joy to work with.
I haven’t washed it yet because I knew I would have help in trying to photograph it. Look who just had to be in the picture. She kept grabbing the corners and pulling them over on itself. Sorry the picture isn’t any better. The blanket is about 40 in. square and I love it.  You can’t tell very well in this photo, but I did a single round of single crochet around the edge in the darker linen color. Doesn’t Zoey look like she has a surprised ghost face on her back with those three brown spots? 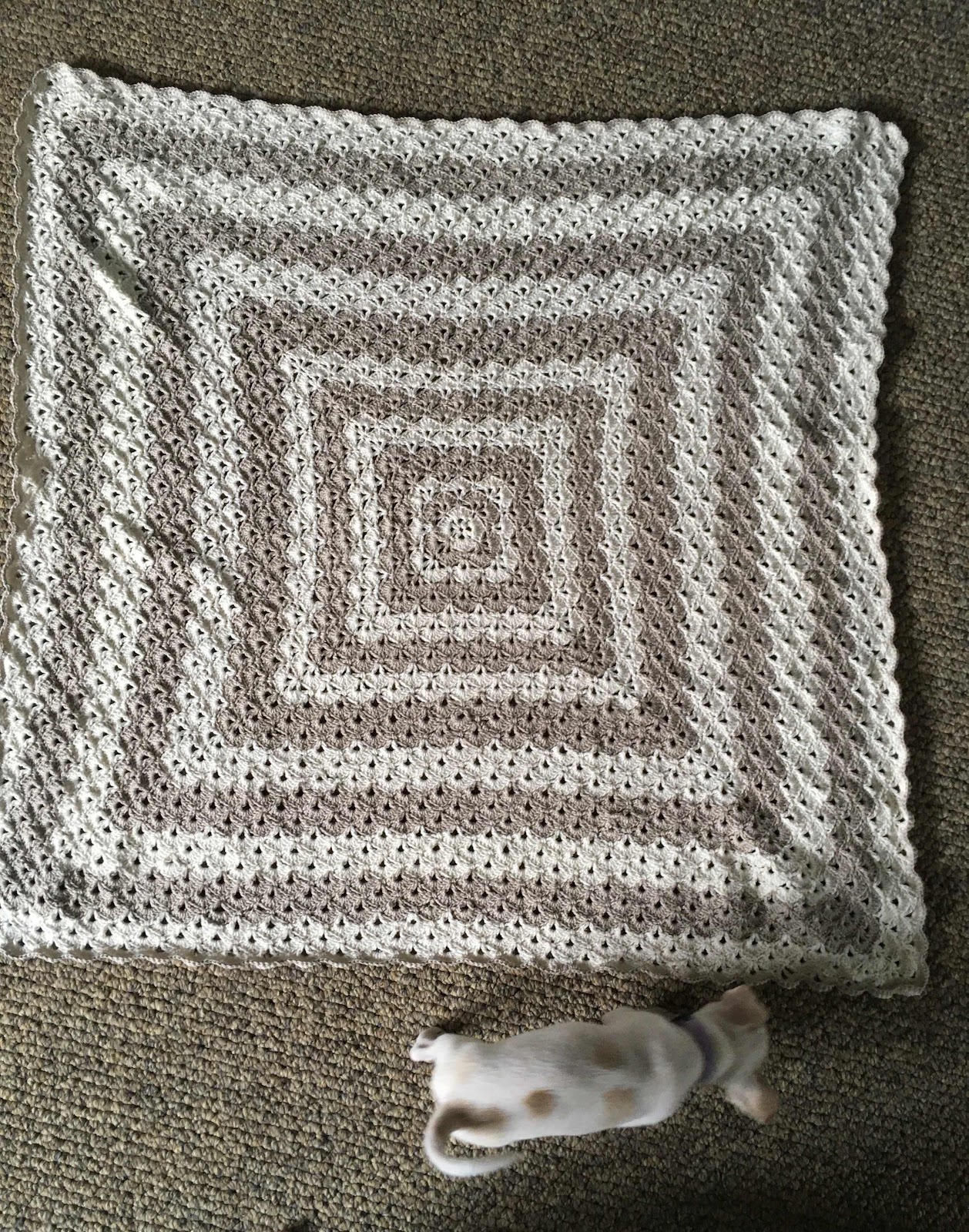 After I finished the blanket last night, I also finished off this dish cloth that I had about 3/4 done. 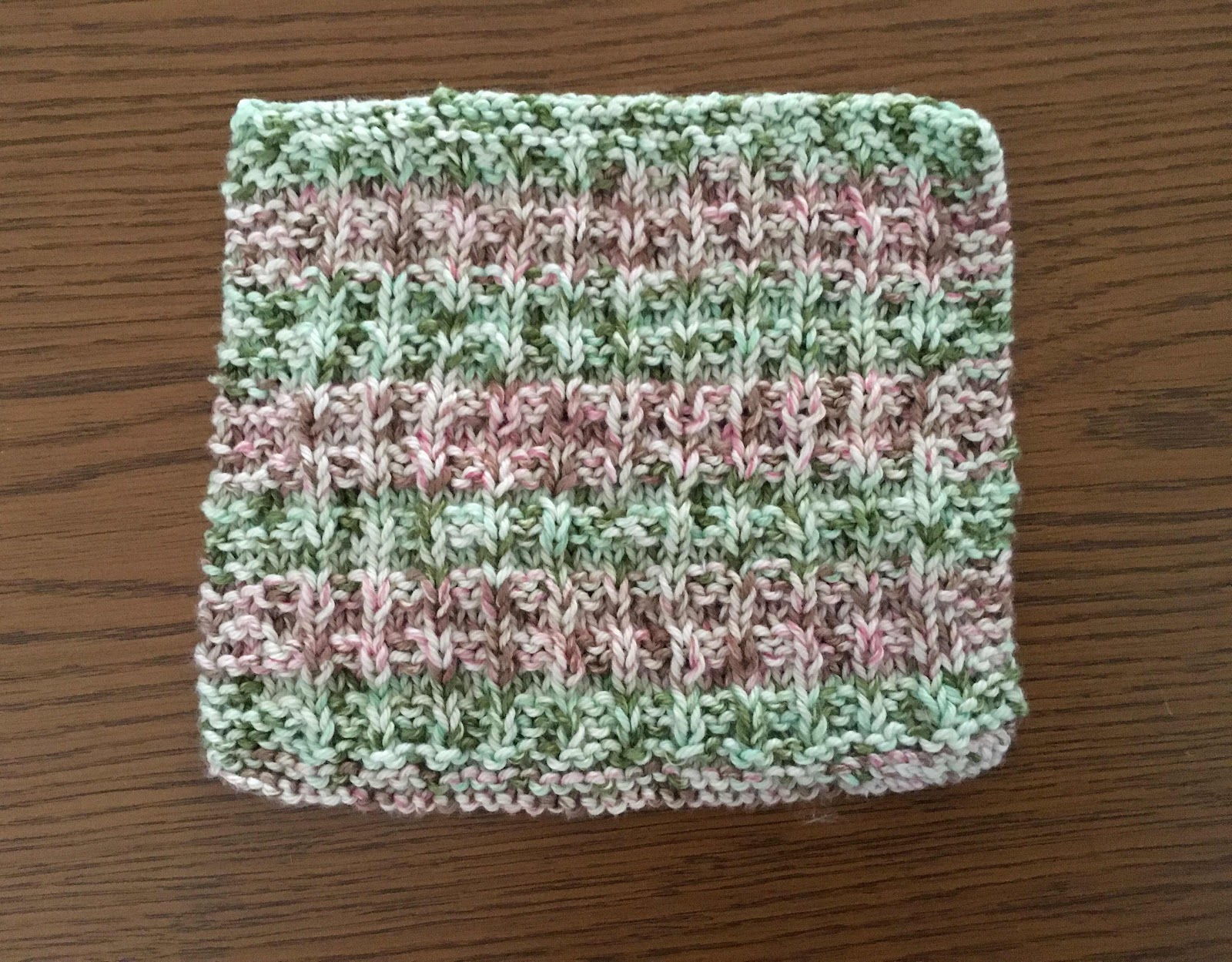 Whew!  It has been a crazy, crazy week. Dennis is working on selling the company and that is the reason for all of these trips to Spokane recently. It sounds like there are some people very interested so it may be over and done with sooner rather than later. I must admit it was nice having this little furball here with me while he was gone these two nights. It’s amazing the difference it makes not being alone in a house. Even when your companion is a measly 2.8 pound ball of fur! Dennis called a little while ago from the airport in Seattle. I had him on speaker phone and when Zoey heard his voice she went crazy and she started licking the phone . She actually hung up on him with her tongue! I called him back and he wondered what it happened. I think he was very pleased when he realized how much she seems to miss him.

I think I’m home for a while anyway. I was hoping maybe to take a trip by myself and meet some blog friends this fall but with so much Covid out there I’m really not comfortable doing that. I have been stressing over the birthday party for the last couple of weeks. At least it’s over and I can’t second-guess myself anymore.
I apologize once again for getting a little bit behind in reading your blogs over the last several days. I think I’m all caught up now and will try to do better now that all of the big events are done with for a while. Take care my dear friends and stay safe. 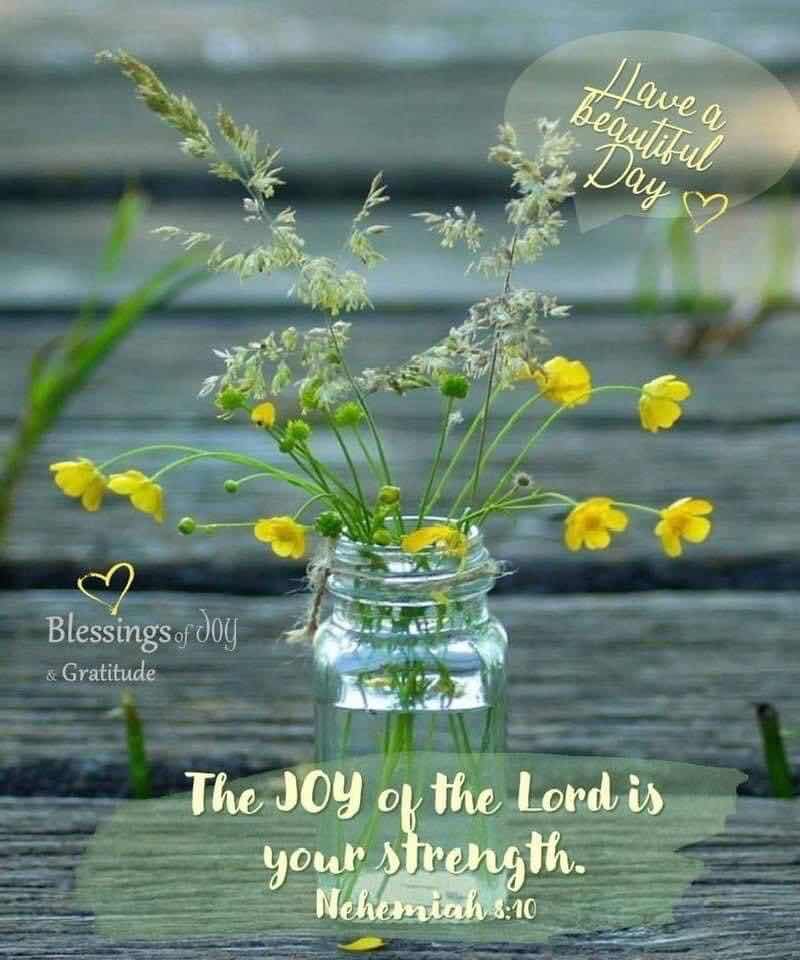