Hello again.
Same song, second, third and fourth verse.  The smoke, once again, drove me home from the lake on Tuesday.  This is getting old people.  We have to close up the trailer by the end of September because of new rules in the park.  Everything must be done on or before October 1.  It seems we lost much of this summer because of smoke.  The weather people are promising, again, that the smoke should begin to clear by tomorrow.  We shall see.  We get one or two nice days and then a week or more of smoke.  To top it all off, I got a migraine last night that is still making it's presence known today.  I get the type of migraines that the first symptom is a "hole" in my eyesight.  Within five minutes I can't see at all and then after about half an hour my sight returns, but then the headache comes.  Sometimes the headache remains for days.  I thought this was going to be a relatively mild one, but unfortunately, it's still here today.  Sometimes worse than others.  So, while it's not too terrible, I thought I would try put up a post and say hello to all of you.

As I said in my last post, Saturday, September 1 was our 40th anniversary and we spent it at the lake.  Neal & Jenny took us to dinner on Friday night where we all ate way too much.  Here we are 40 years ago. (That was my Mom's wedding dress that she wore in 1944 as a bride in WWII.)  Dennis and I are exactly the same height so the difference must be my shoes, veil and the fact that his hair is so dark it blends in to the background. :-) 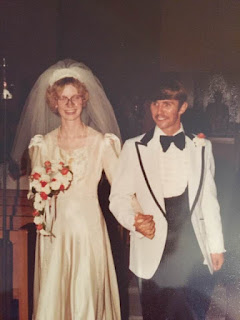 And here we are exactly 40 years later on Paul & Lori's boat at Loon Lake, WA.  Still happily in love with each other.  He's my best friend and I'm hoping for many more happy years together.  Our hair is pretty much plastered back but that's because we had been flying around the lake at quite high speeds!  We were wet too, from waves splashing in from skiers and tubers. 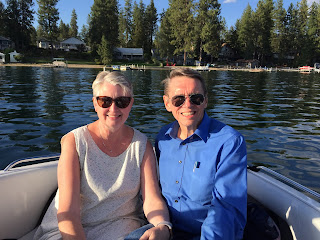 We were then surprised at church Sunday morning with cake and punch after services. 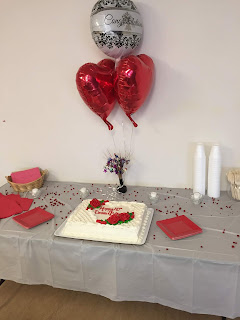 40 is apparently the "ruby" anniversary so they had little "rubies" sprinkled around the table. 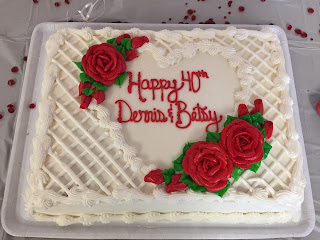 We had visitors too.  Larry & Nita, Paul & Lori who all camp with us were all there of course, but Mark & Karen and Jenny all came to visit too. 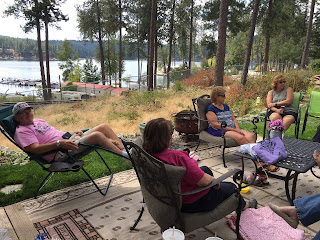 Neal & Jenny's daughter Cassie was getting married the next day so Neal was at the wedding rehearsal and couldn't come out.  That's our trailer in this photo. 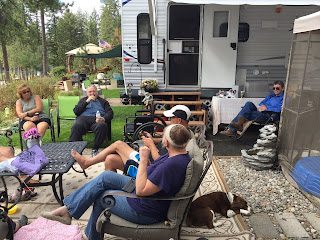 Speaking of the wedding.  Here is the Dad & Step-Mom, Neal & Jenny at the reception.  It was a beautiful outdoor wedding and the smoke actually stayed away that day. 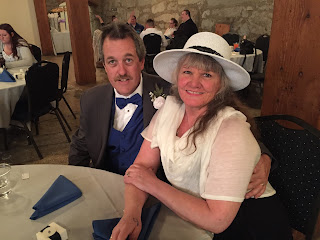 They were married at a venue right by the Spokane River Falls which were still flowing even after a long, hot summer.  You can barely see them behind Nick, the ring-bearers head.  Cassie was a beautiful bride.  We've known her since she was a toddler.  We wish her and Andrew all of the happiness in the world.  They are so in love and it shows. 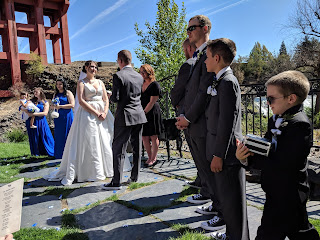 All of the knitting I've done this week is two pair of mittens which I didn't bother to photograph and more on this scarf.  It really DOES take a long, long time on these tiny needles.  Amelia doesn't look impressed does she? She's my supervisor. :-) 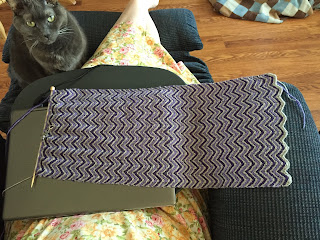 I thought I would show you a canoe that Alex built himself this summer out of plywood!  And it floats. :-) He takes it out onto Lake Towada in northern Japan every Monday morning and every other moment he gets a chance.  I'm really proud of him for building this with virtually no carpentry skills.  And I love the colors he chose for it.  It really stands out on this beach doesn't it?  I just heard about the earthquake that hit northern Japan in Hakkaido today.  That isn't very far from Alex and I haven't heard from him yet.  If you will, could you say a prayer for him and all affected.  I just read that several people have been killed and many are missing. 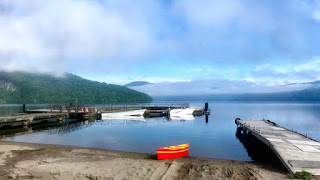 This is a photo from his facebook page.  I have no idea what it says, but it does have his picture and the name of his company, Queen&Co.  I thought it was kind of neat. 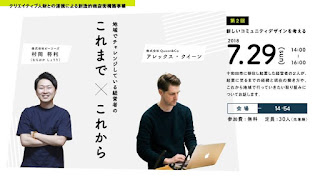 And that's all I have.  My head is really hurting again so I'm going to close.  I hope you're all having a wonderful week and I'll be checking in with your blogs.  I am grateful for each one of you and appreciate you taking the time to stop by and visit with me.

"The LORD is my strength and my shield;my heart trusts in Him, and He helps me. My heart leaps for joy, and with my song I praise Him." Psalm 28:7

"Be joyful in hope, patient in affliction, faithful in prayer." Romans 12:12