Happy September my friends!  I know, I know.  It's been September for a week now, but I've had a busy week and although I've tried to keep up with reading my friends blogs, I haven't had a moment to write a post of my own.  Here I am though and ready to update you all on my exciting life. Ha!
Monday, September first was Dennis' and my 36 wedding anniversary.  God blessed me more than I could ever deserve when he gave this man to me.  He is the love of my life and I am SO grateful for him.  He is wonderful and I wish every woman could have a husband like him.  We met when I was 15 and we married when I graduated from high school at 18.  Yes, that makes me 54 years old!  He was a handsome guy in an U.S. Air Force uniform when we met in church.  I love him and miracle of miracles, he still loves me too!
Remember when our tree blew down a few weeks ago?  Well, Dennis wondered why it couldnt have been the tree that used to live in this corner of the yard that we had planned to remove anyway.  This was what the corner looked like after the guys took it and two BIG bushes out on Tueday. 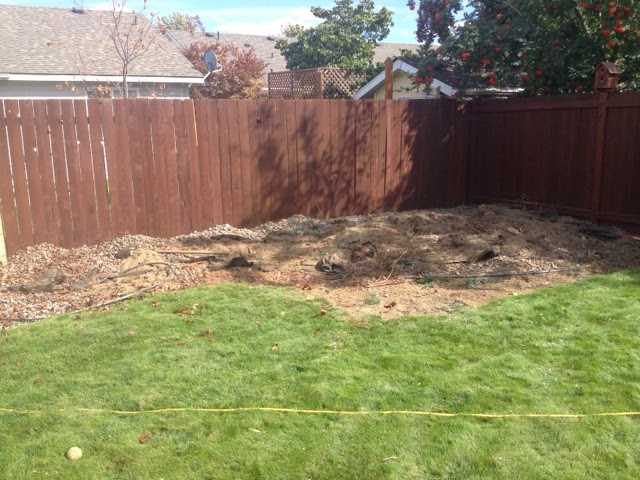 The three musketeers built us a shed in just two days.  In pouring rain and cold the second day.  I love these guys.  Seriously.  Jeremy, (on the roof), was our son's best man in his wedding.  They have been friends since the 5th grade.  He owns his own concrete and excavating company but he takes VERY good care of us.  He fixes and builds anything we need done and does a wonderful job.
The guy at the bottom left is Wes. He and his sister grew up with our daughter Mandy and his parents are Paul and Lori who camp next to us at the lake.  Brian is in the middle and we've just gotten to know him in the past few years.  All three of these guys go to church with us and we would trust them with anything.
Jeremy put three windows in on all three sides except the front.  I like the window panes don't you?  Jeremy chose them for us when we said we wanted a window of some sort for light. 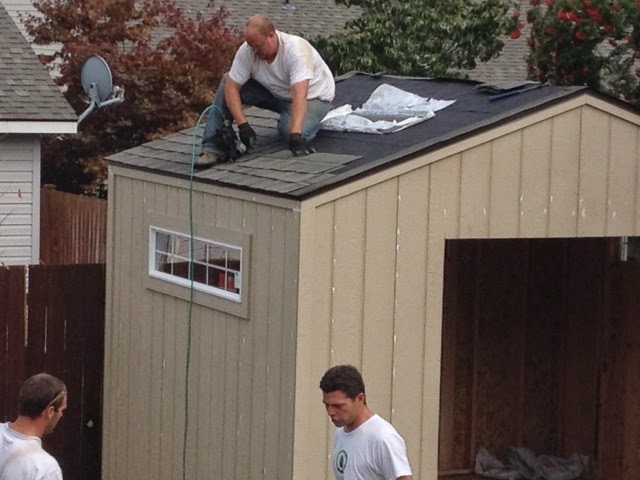 All done with the building part of the job.  I watched Wes build and shim the doors.  Now I know why single doors are so much easier!  :-)  I tried to warm them up with coffee and homemade banana bread on Wednesday when the weather was so icky. 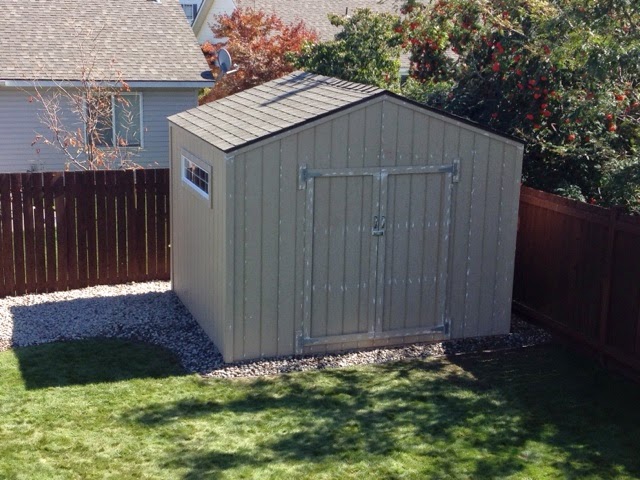 Hubby and I primed the entire shed on Friday.  I helped while Piper napped and then he was on his own!  She likes to play with paint too much to trust her to stay away. 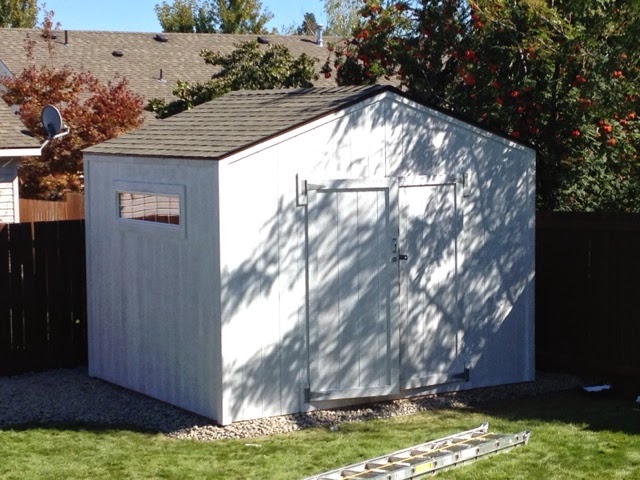 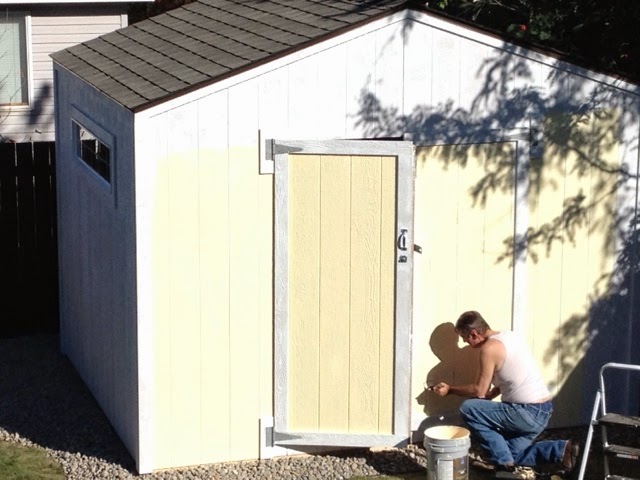 All done!  Isn't it pretty?  It's BIG.   10 x 12 feet  Dennis is going to build a potting bench in it for me and we'll be able to store lots of things that are in the garage in it so that he can actually do some wood working in his garage this winter.  It's been so crowded with the snow blower, lawn mower, power washer, air compressor, bikes, etc., that he has't had any room to actually work in there. 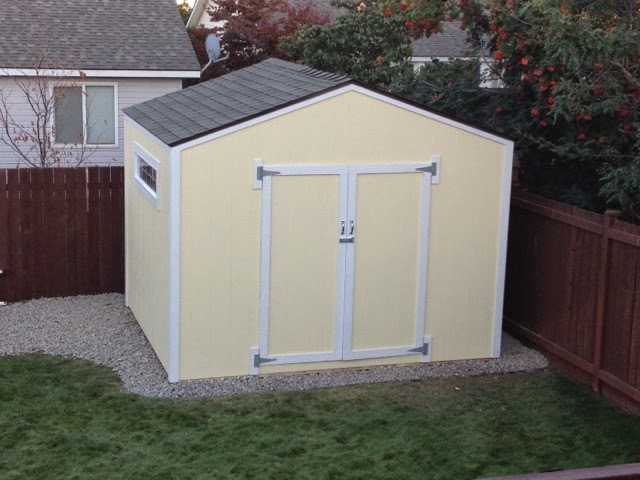 Now I have to figure out if we're going to replace the tree that blew down and if so, what kind should we plant?  I also want to put some rose bushes in that blank area by the side of the shed next spring.
We've been wanting a shed for several years now and it's one more item checked off the pre-retirement "want" list!
My friend Marilyn has recently been diagnosed with cancer and last week lost most of her hair and so she had the rest cut off.  She needed light blue hats to match her work uniform so I made these for her in one day.  Both are chemo caps.  The one on the left is called "seeds of hope"  and the one on the right is "wings of hope".  You can't tell, but it has wings like butterfly wings in the pattern.  I hope they give her a bit of a hug from me when she wears them. 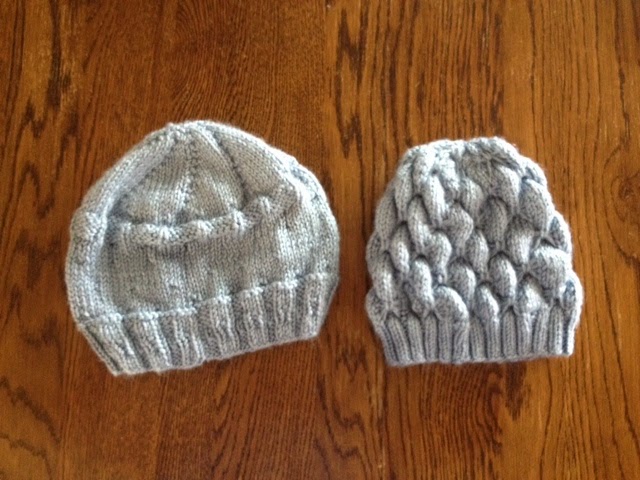 Here is the latest update on Mandy's Wonderful Wallaby.  I'm amazed at how much longer it's taking than Piper's.  An adult size is a LOT more knitting than a toddler size.  I go 'round and 'round and it doesn't seem to get any bigger at all.  But see, the pouch is done and now I'm working on.... 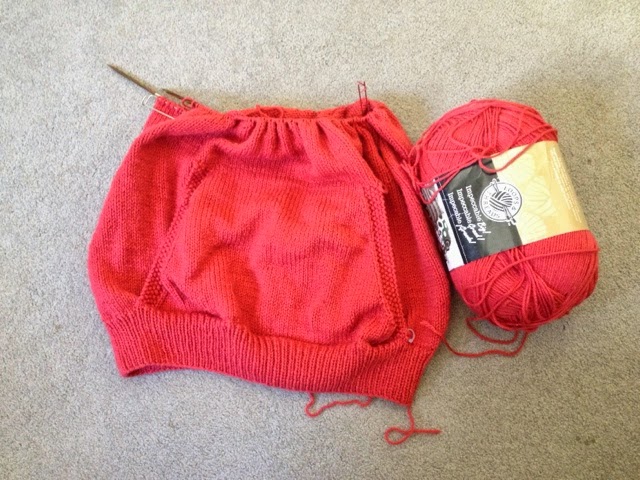 ....the sleeves.  This is sleeve number one. 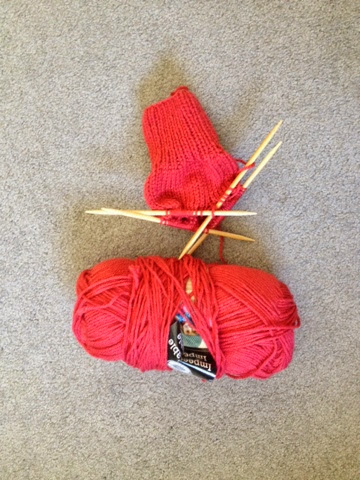 And no post these days would be complete without a photo or two of my Miss Piper.  Here she is supervising Grandpa's painting of the shed.  She is very intent on the job he's doing isn't he? 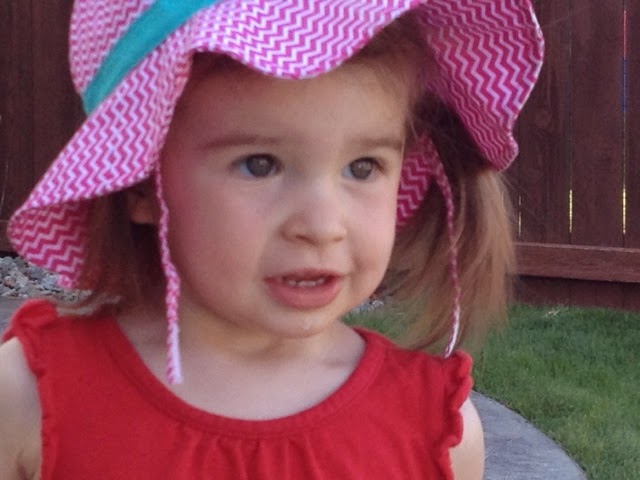 I adore this face.  We took her out to the lake yesterday and Grandpa was pushing her on the BIG swing.  She usually gets into the baby swing, so she thought she was really something when she held on all by herself and Grandpa let go.  Oh my goodness I adore this child. 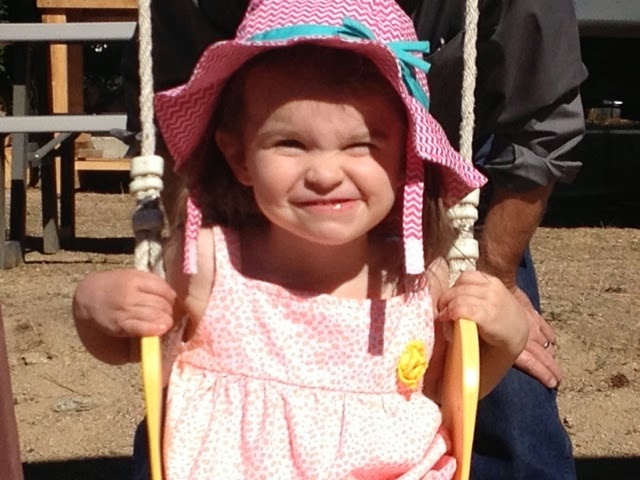 This was on the car ride home from the lake.  She was exhausted and we were sure she would fall asleep while we drove home, but nope.  She entertained us by singing "Let it Go" from the movie "Frozen", complete with hand gestures.  Be still my heart. 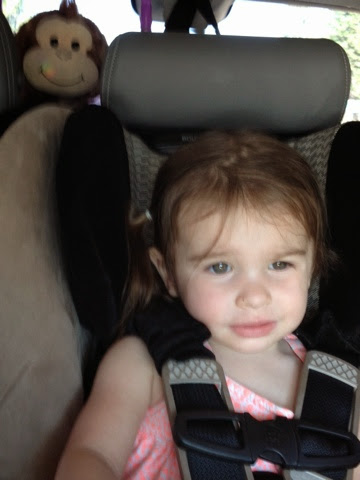 Mommy flew to D.C. on Thursday to look for a house with Daddy so it's been Grandpa, Grandma and Piper this week.  Oh and the two dogs and two cats.  We're doing fine but Mommy is missing Piper something terrible.  I think they've found a house.  Time will tell if it all works out as these deals seem to keep you on pins and needles till the end.  The movers made it there and have put everything into storage.  It seems so very, very far away from us but I'm really trying not to think about it and I'm enjoying every second with my little princess for now.
I hope you're all enjoying the late summer weather.  It's so beautiful here that I'm wishing time would standstill for just a little while and let me breathe in these days.
Blessings always,
Betsy
Posted by Betsy at 1:19:00 PM