Happy Monday!
I tried to do a post while I was gone, I really did.  But blogger wouldn't let me add pictures on my iPad and really, what kind of post would it be while visiting Piper without any pictures of her?  So I decided it would be better to spend my time playing with her instead.  Please be warned this is a photo heavy post!

I'm pleased to announce that we have a budding knitter on our hands.  She was so excited to learn to knit.  She actually knitted around 6-8 rows all by herself and then Grandma finished for her.  I'm excited about his development.

It took much concentration... 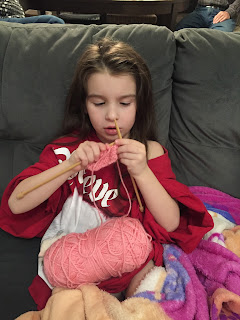 but in the end there was a sweet scarf for Polly to wear outside in the frigid weather.  I was really surprised at how even her stitches were and how hard she worked at it without giving up. 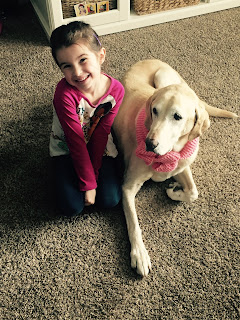 We had a nice visit with Marilyn and Dennis and I gave her the blanket I crocheted for her.  She seemed to like it and sent me a text later in the week that said she uses it every day.  Just what a knitter/crocheter likes to hear. 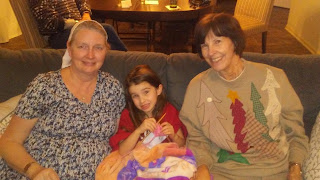 Piper does the vacuuming now and does a great job of it.  Yes.  That's a huge t-shirt that she was wearing for her nightgown.  She likes it. :-) 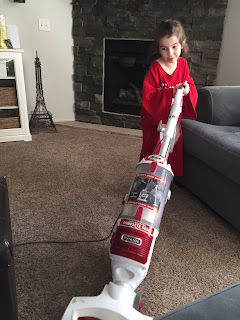 Tuesday morning the two of us made a cherry cheesecake for Papa and Mandy's birthday.  Please excuse the wet hair, I had just gotten out of the shower. 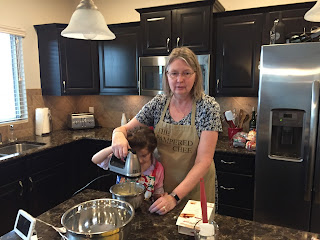 Dennis' birthday was January 9th and Mandy's is the 20th.  Their favorite is cheesecake so Piper and I made one and we celebrated both birthdays at once.  It was a hit!  Mandy got two pairs of socks. 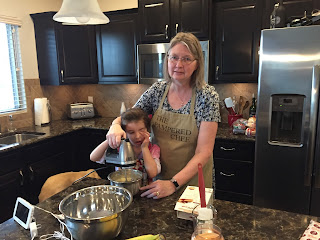 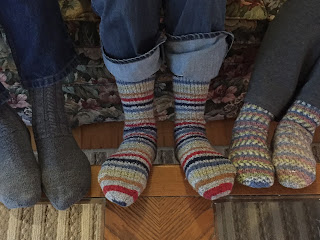 Here they are with their socks!  It's not easy to see, but Dennis' are full of tiny cables running up the socks. 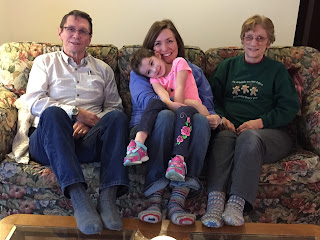 Piper diligently worked on thank you cards for Christmas gifts while we were there.  She's quite an artist. 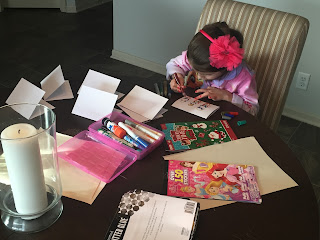 Our little princess.  A bit of a fake smile but I love it anyway. :-) 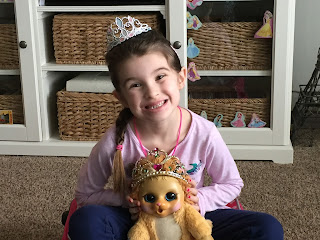 She and Papa wrestled and played the week away. 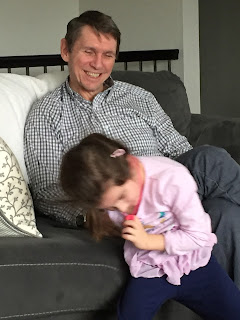 They had quite a lot of fun!  She loved having Papa there too.  Usually it's only Grandma! 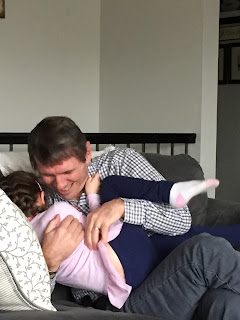 And then Belle made an appearance. 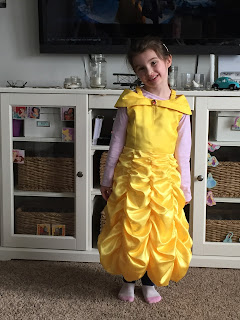 Papa played the part of "The Beast" and they whirled and twirled around the living room while the movie played in the background.  It was a beautiful ball!  Papa needs a costume change though! 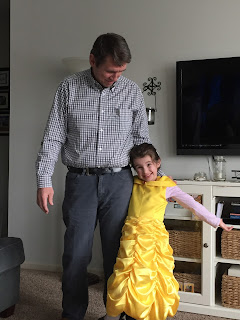 We did have a day when it was nice enough to take a walk and Piper drove her police car complete with lights and siren.  They neighbor GAVE it to them last summer right after they moved in.  He's a police officer and his little girl had two of these cars.  It only needed a battery, but Brad replaced the stickers too and shined it up and it looks brand new.  Gosh that car goes fast and reverses too.  Piper is proving to be a pretty good driver too.  Look!  She has her mittens on that I made her last winter.  I LOVE, LOVE, LOVE seeing my knitted things being used as intended.  So often I give things away and never see if anyone actually uses them.  Mandy wore her wrist-warmers AND her mittens while we were there.  ***sigh***  happy Mama. 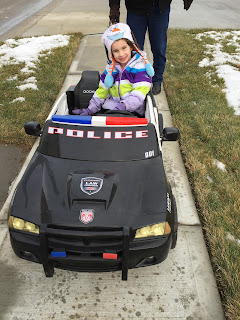 I put another row on the scrappy blanket last night while watching podcasts. 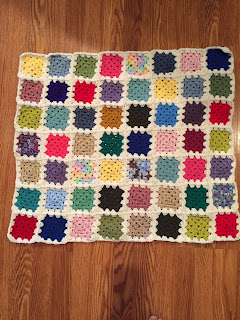 I finished the socks that Mandy is wearing in the picture above while flying to Omaha and then started these.  They were my airplane knitting on the way home.  I have both pairs just past the heels.  Alex saw the yarn while we were face-timing and called "dibs" on them just before Mandy said she wanted them!  They both want them.  Unfortunately Knit Picks doesn't have this colorway anymore.  I'll have to watch their website and hopefully they will restock it before we have a sibling war! 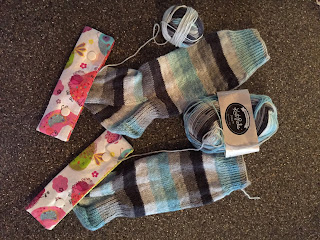 Oh my goodness, it was SO hard to leave our girls.  I practically ran in to the airport when we left Saturday night.  The tears were falling.  Piper did not need to see that.  We were able to see my sister just for a short visit, but not my brothers.  We did get to see Mom on three different occasions and Dennis' sister too, but the weather and only having a week made it difficult to see people.

I'm thinking of driving back in the spring so I will have a car and can stay a little longer without airline schedules to deal with.

Well, I think this is long enough for today.  Hopefully I'll be back before the end of the week to visit you all again.  I tried to keep up on commenting on your blogs but I think I missed some.  I hope you all have a wonderful week ahead.

"But  let all who take refuge in you be glad; let them ever sing for joy. Spread your protection over them, that those who love your name may rejoice in you. Psalm 5:11