There isn't a lot exciting going on in my world right now. I've spent the past week at the lake, which is the reason I haven't been able to visit your blogs very often. My data is limited there but I try to hop on every couple of days. If I've missed you, I sincerely apologize. Here are some pictures of what's been happening in the past week.
We had a birthday party for Paul on Friday out at the lake. There were about 15 to 20 people there and that was really nice. Paul is our next-door neighbor trailer and we've known him and his wife Lori for almost 23 years...ever since the first week we moved to Spokane in fact.  Good friends. 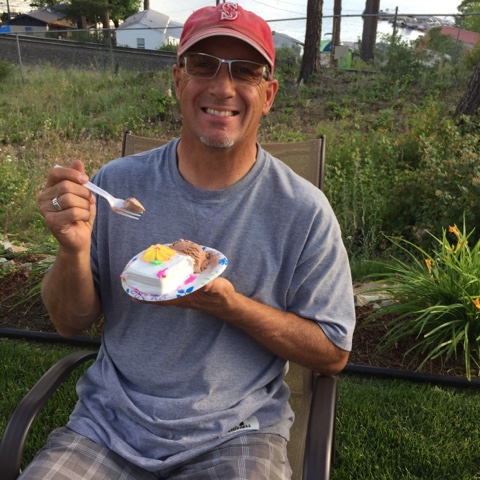 Balloons and cake and fun with neighbors. A good time was had by all. 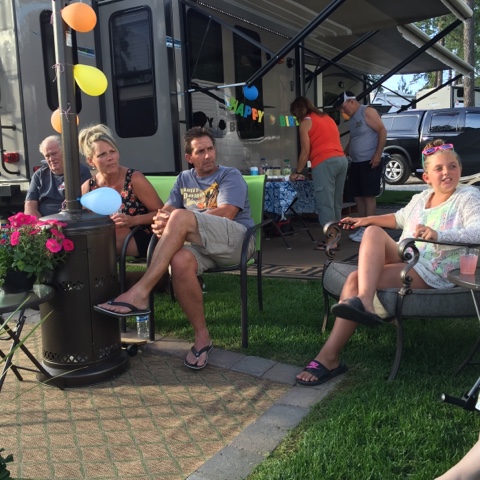 It was really sunny during the party. I had this hat on and when I took it off and set it in my chair for a few minutes, Dennis plopped it on his head. Everybody thought it matched his shirt very well!  Look fast. It's not very often you'll see my husband wearing shorts! Ha ha! Every year on the Fourth of July people decorate their boats in patriotic colors and there's a parade around the lake. This year was very windy and chilly during the boat parade.  Only about half of the normal number boats participated. I caught just a few of them in these next two pictures. 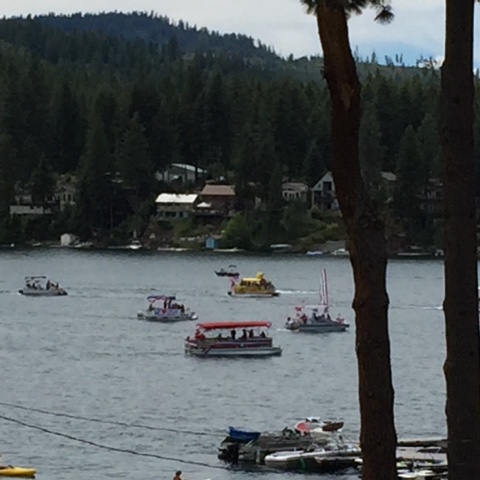 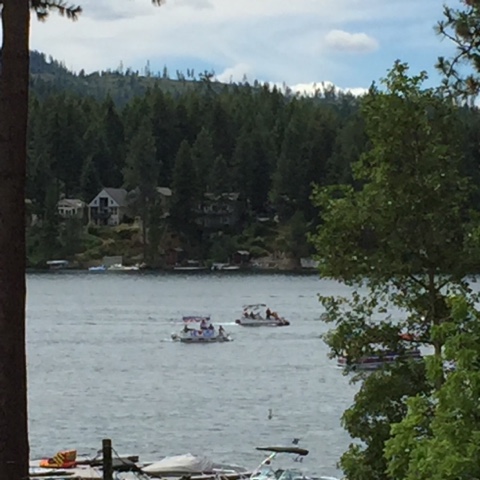 On the evening of the 4th of July, the resort has a band and treats all of the residents to hotdogs and hamburgers every year. We provide the side dishes. It was so much fun. Dennis and I really enjoyed listening to the band. I missed out on all this last year as I got my pacemaker on July 7 and wasn't allowed to be so far away from the hospital on the 4th.
The band was great and included the children in almost every number. They had different kids come up and play the cowbell and the tambourine during the songs. They were really good too and played everything from Fleetwood Mac to contemporary country songs. 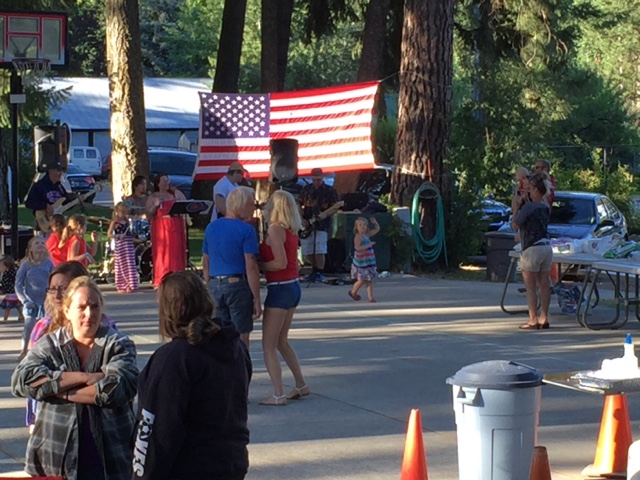 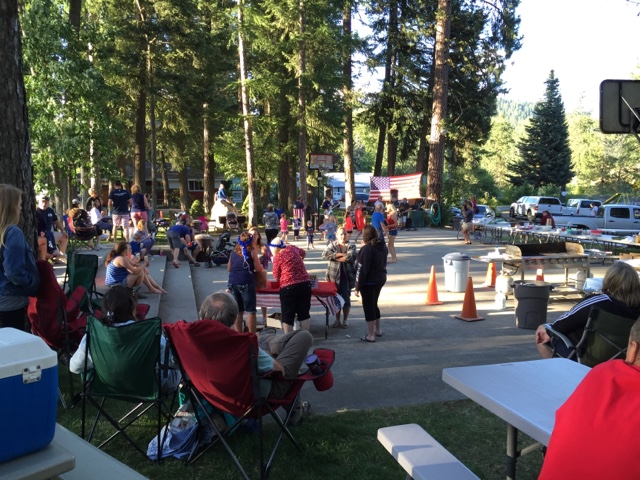 I managed to finish a few projects this week and read two books!  Here's my simple shaw. I'm still not sure what I'm going to do with it.  The yarn was donated to me by a lady moving into a nursing home, so I feel I should give it to charity, but I'm very tempted to keep it for myself to wear under my winter coat as a scarf.  In this picture I hadn't washed and blocked it yet, so it was curling up a bit on the edges. 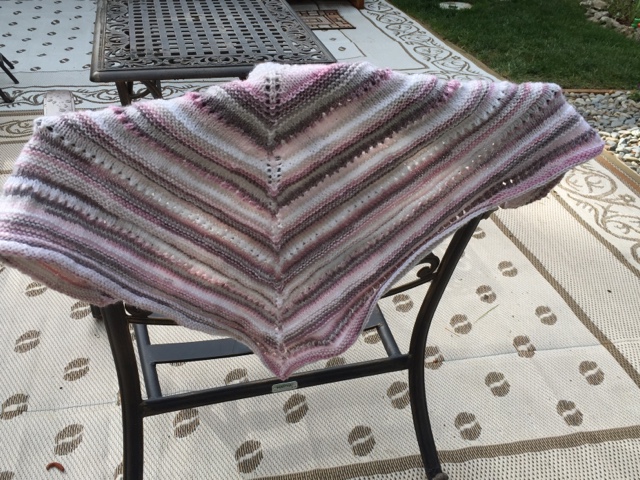 I love the stitches and how the color reminds me of Neapolitan ice cream. Nita gave me another batch of squares and I put those together over the weekend. This blanket will also go to the crisis nursery. 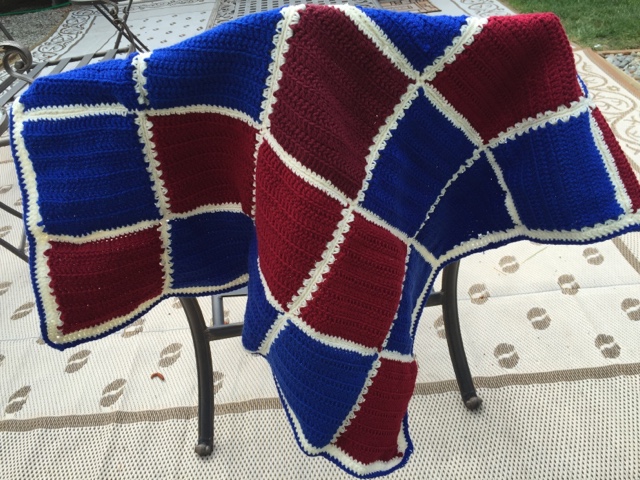 And I started on my Christmas gift list. Hurray!  Christmas in July!  This is a "Random Act of Color" shawl, designed by Debbie Reese and Amy Meeks in honor of their sister Wendy, who passed away at a young age of cancer. Their sister loved color and was known for her random acts of kindness. This shawl is for someone I love very much who wears these three colors a lot. It's the first pattern I've bought in a long time, as I usually use free patterns off of (Ravelry). But I think it will be worth it. The money you pay for the pattern also goes to charity as it is being donated by Debbie and Amy. 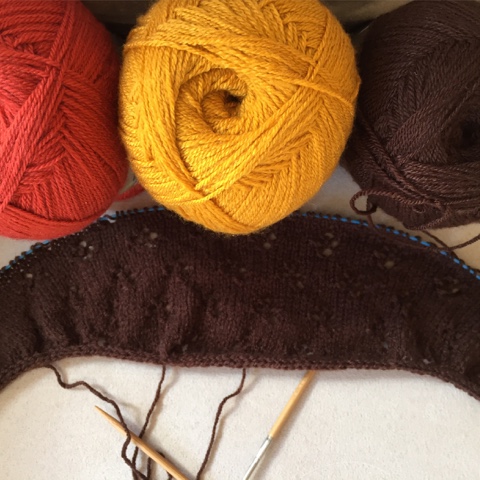 I received a surprise box in the mail when we came home for church on Sunday. Inside the box were these beautiful mittens and this amazing crocheted angel. Sherri, of Sherries Needle Crafts over on my side bar, graciously made these mittens for me to donate to the school. She had asked for my pattern and she even used the same yarn I use. Wasn't that just the sweetest thing? And she knows I love angels so she crocheted me this beautiful angel in the pretty frame. Sherry, I can't thank you enough. 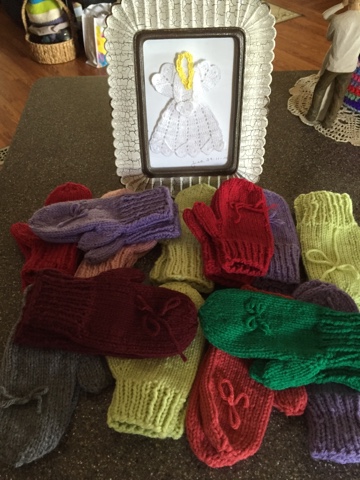 Isn't she pretty?  I love that her wings look like hearts. And the hem of her gown is upside down hearts. 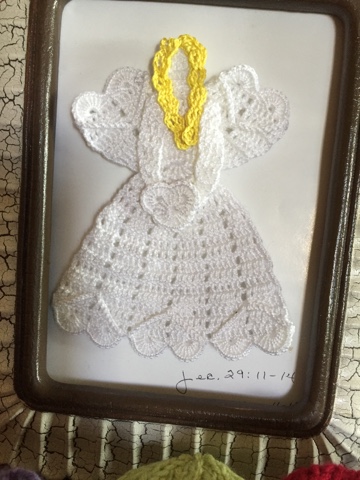 Last night Dennis and I were walking along the beach just before sunset and these clouds were rolling in. Aren't they just gorgeous?   We got a few sprinkles overnight which were very needed and sounded wonderful on the roof of the trailer while we were sleeping. It's one of my favorite sounds in the world. 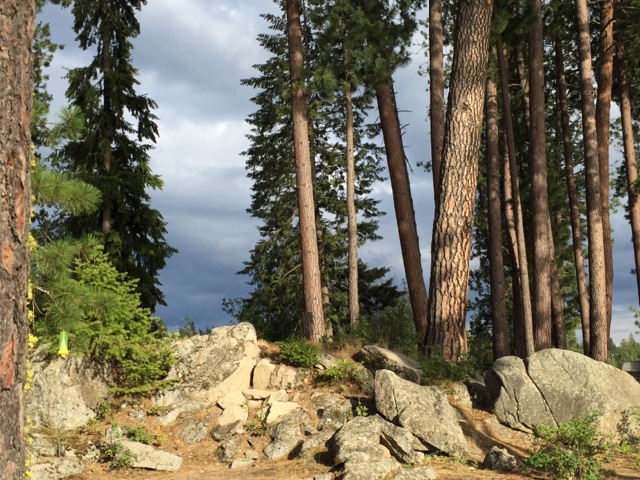 And then I turned around and took this picture of the sun getting ready to set behind the clouds in the mountains. I do believe God does the most amazing artwork I've ever seen. 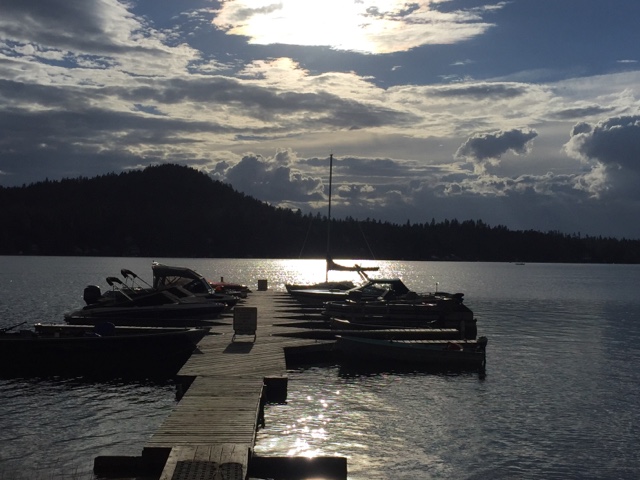 I did go to the cardiologist last Thursday. When they downloaded the information for my pacemaker it showed I've been having increasing amounts of tachycardia even with the medication. He doesn't want to give me more medicine because it will lower my blood pressure even more. So we're in a waiting game now. I'll send them a remote download the first week of August and then I'll go see him in a couple of months and he'll evaluate the situation again then. He's talking about doing an ablation, which is cauterizing the part of your heart that is signaling the tachycardia. That sounds very scary to me and I want to avoid it. If you are a praying person I would appreciate prayers that this would resolve on its own.  I have been feeling very well the last few days though, which I'm taking as a good sign.
Another great thing is that my head is feeling much better this week. I even walked 6 miles yesterday! That's the most I've walked since I managed to give myself a concussion. Thank you for all of your sweet thoughts and comments about that too. Everyone at the lake says they're going to get me a football helmet and decorate it and I'll have to wear it everywhere! Ha ha!
I'm home for a few days to do laundry and have Bible Study group but then hope to go back to the trailer on Friday. I am so enjoying my time out there right now, but it's good to be home with the unlimited Internet so I can catch up with all of you, my friends.   And I truly do consider you all to be my friends.
"Let us hold unswervingly to the hope we profess, for He who promised is faithful". Hebrews 10:23
Blessings always,
Betsy
Posted by Betsy at 3:03:00 PM