Oh. My. Goodness.  We have had a crazy, insane week here.  Last Tuesday we had hurricane force winds for the first time in Spokane's recorded history.  There were 180,000 households and businesses without power at one time, which is most of the city.  This morning there are still over 40,000 without power.  The winds were howling at 77-79 mph for hours in the afternoon into the overnight hours.  We we laying in bed Tuesday night and it felt like our house was breathing.  It's the only way I can describe it.  We only lost our electricity for a little over 18 hours so we were VERY fortunate.
I was making a pot of soup when the power went out.  Since I have a gas stove, I was able to light the hurricane lamp and keep chopping vegetables.  :-)  I could hear the shingles ripping from the roof like a giant roll of duct tape.  However, all of the houses on the block north of us lost their roofs down to the plywood so I count us as very fortunate indeed.
Before the distruction pictures, here's Sophie, just before we took her home Sunday night.  I miss my little knitting buddy, curled up in my lap on these cold nights. 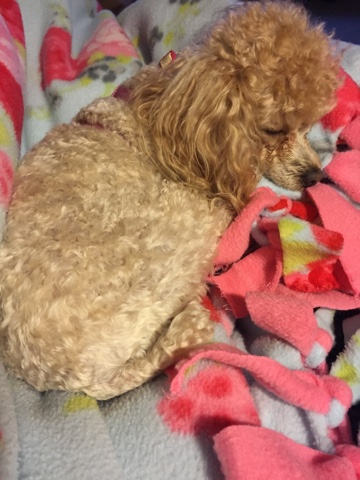 I don't have many pictures of the utter destruction around town because I've stayed home for the most part.  It's still difficult to drive through the city in places, because of downed wires and trees.  It's easier to stay in my house.
There are over 280 trees like this down at last count.  Huge trees just gone.  See the one leaning on the house at the left? 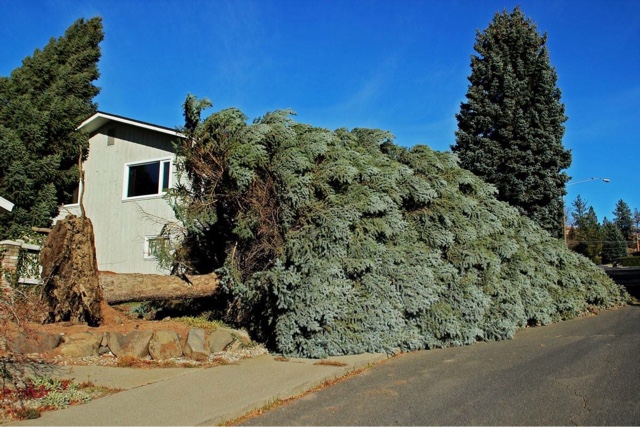 Luckily this one missed the house. 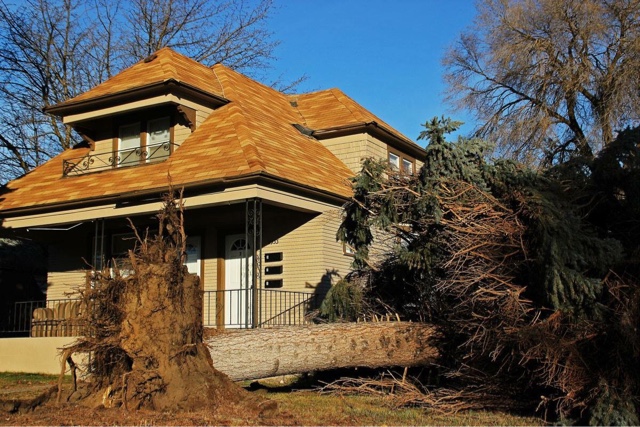 Not quite as lucky. 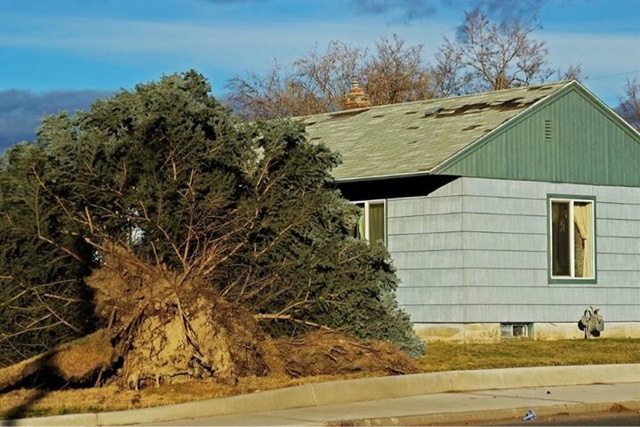 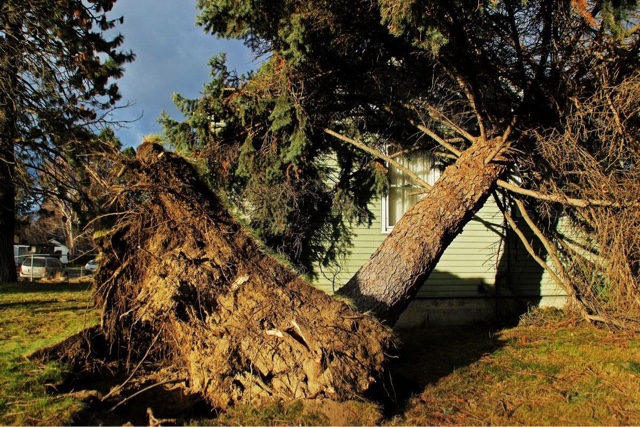 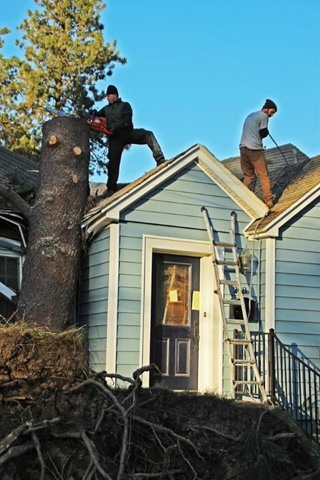 We lost a bunch of shingles and when I called roofing companie, they were 6-8 weeks out just for an estimate.  I called our son Alex's best friend Shane, and he came right over.  Shane's a rock climber and at a few of the steeper points on the roof he actually put his climbing gear on and took care of fixing the roof in no time.  I am SO grateful to him.  Shane and Alex have been friends since they were five years old.  They used to sit on our bed with their guitars and sing Dennis and I to sleep when they were teenagers.  I love this boy like he is our own.  He has a wonderful heart.  Even though he is still without power himself, he has been working half-days and taking vacation the other half and helping the worst hit people clean up trees and whatever they need.  And who says our younger generation is self-centered?  Not this guy.  And he's cute too!  :-) 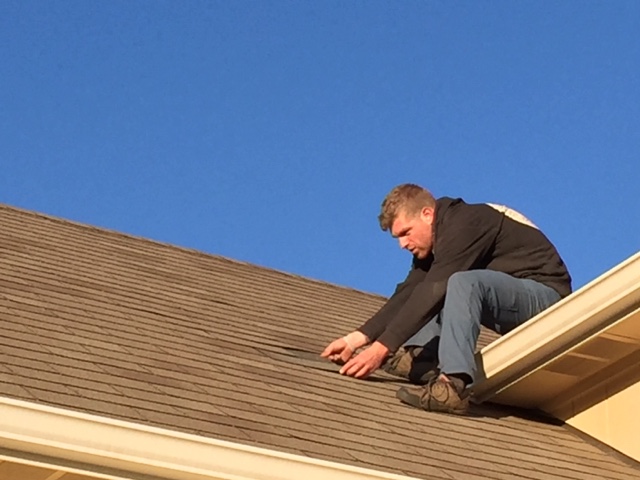 And this morning this is happening.  WIth people still without power.  Can you see the snow still falling?  We're supposed to get another 4-6 inches this morning on top of what you see here. Another view.  I detest snow.  I want to retire somewhere that it doesn't snow.  It's pretty, but it's dangerous.  Dennis said when he went to work at 5:30 this morning that the roads were already slick because it rained sleet before the snow started. 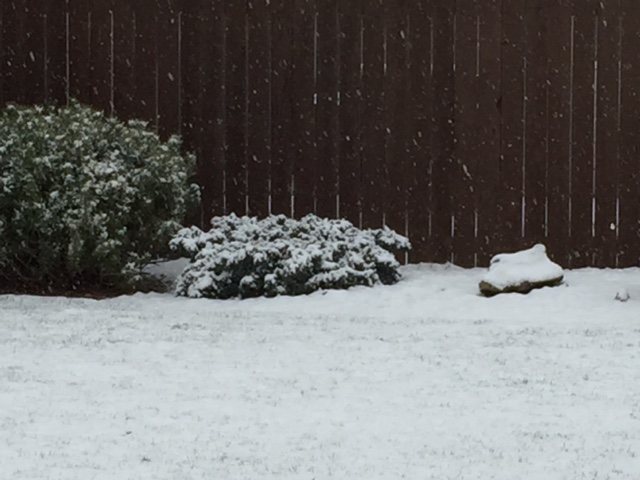 I've been busy making mittens.  This is what I have so far.  I'm a bit puzzled.  I've been using Loops and Threads Impecable yarn.  They are brand new skeins of yarn.  I got 4 pairs of turquoise, 4 pair red, but only 3 pairs of pink.  They are the same size skeins of yarn.  This tells me that the amounts on the labels aren't very accurate.  I'm still enjoying making these and with so many more pairs to make that's a good thing!  :-) 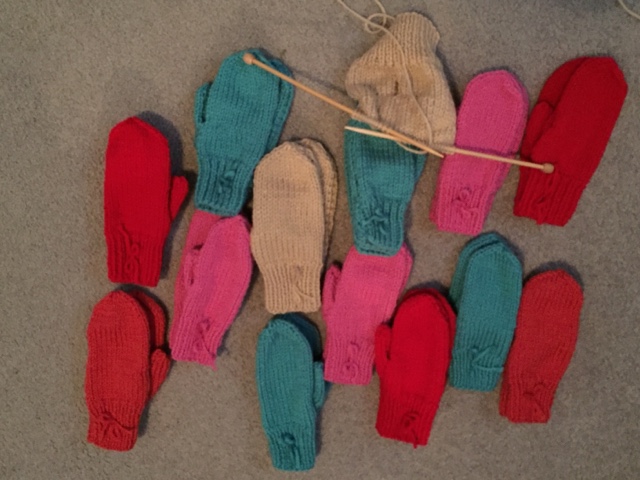 If you are so inclined, would you say a prayer for the people of our city?  The winds are predicted to blow again this afternoon.  Not as strong as last week, but arborists are saying the trees will suffer a sort of whiplash since last week the wind was from the south and today it's from the north.  Trees that the roots were weakened in the windstorm will easily fall this afternoon.  Which means more power outages and it's so much colder this week.
Dennis and I will be alone this Thanksgiving and have decided to forgo the big turkey dinner for the two of us.  After all, we just had a complete Thanksgiving meal at church last Sunday at our annual dinner.  So I'm making chicken enchiladas instead.  His request.  Not very holidayish, but we like them.
I hope all of you in the U.S. have a wonderful holiday and the rest of you are having a fantastic week too.
"But thanks be to God! He gives us the victory through our Lord Jesus Christ."  1 Corinthians 15:57
Blessings,
Betsy
Posted by Betsy at 8:46:00 AM